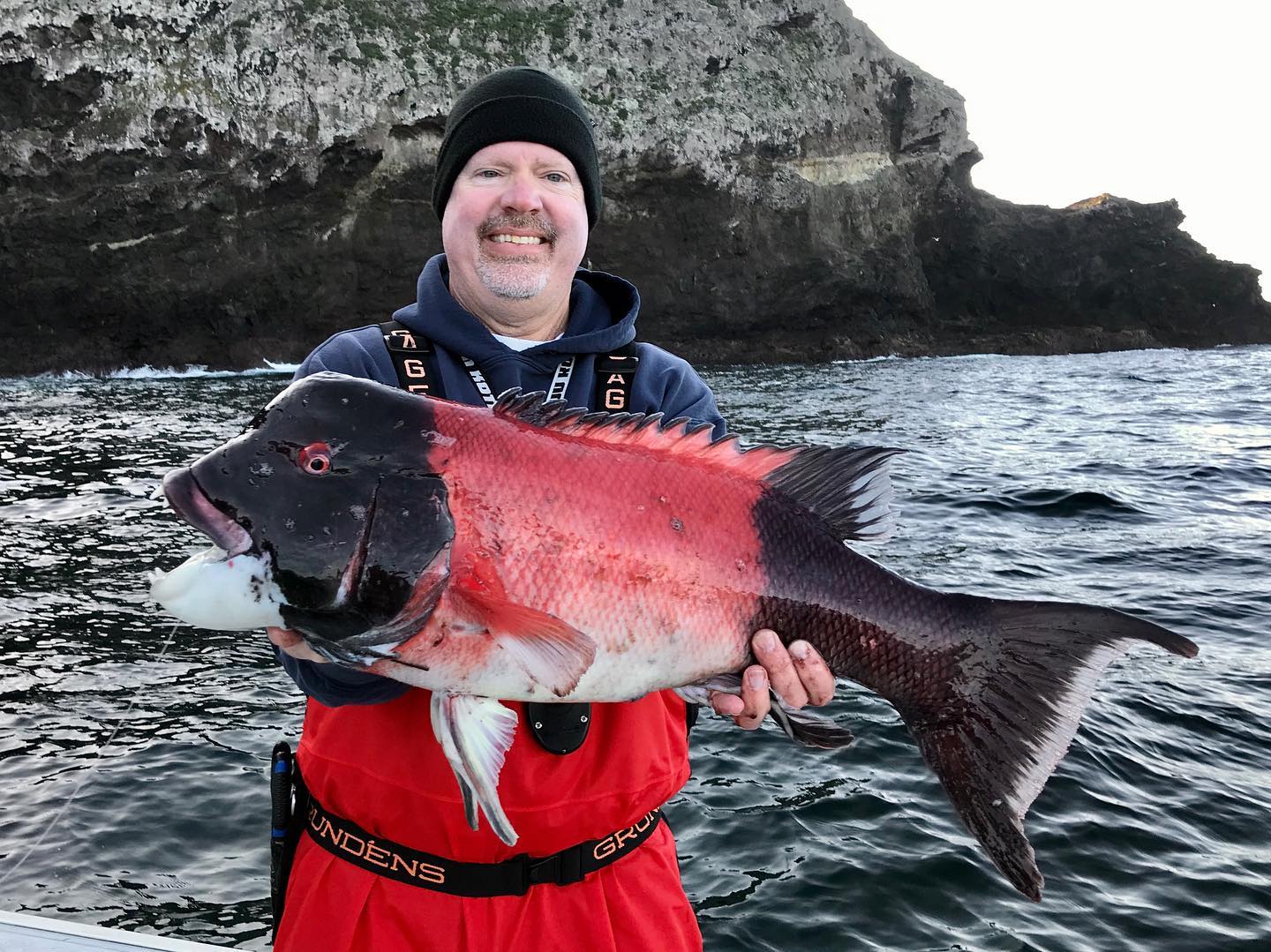 Despite a slight weather delay, this week’s rockfish opener went as expected. All of the sport boats got off the dock for the first time this year and all of them found the rockfish to be in a cooperative mood.  While every boat reporting limits of rockfish makes for impressive fish counts, the numbers don’t reflect the quality of the fish caught or the angling experience associated with catching those fish. 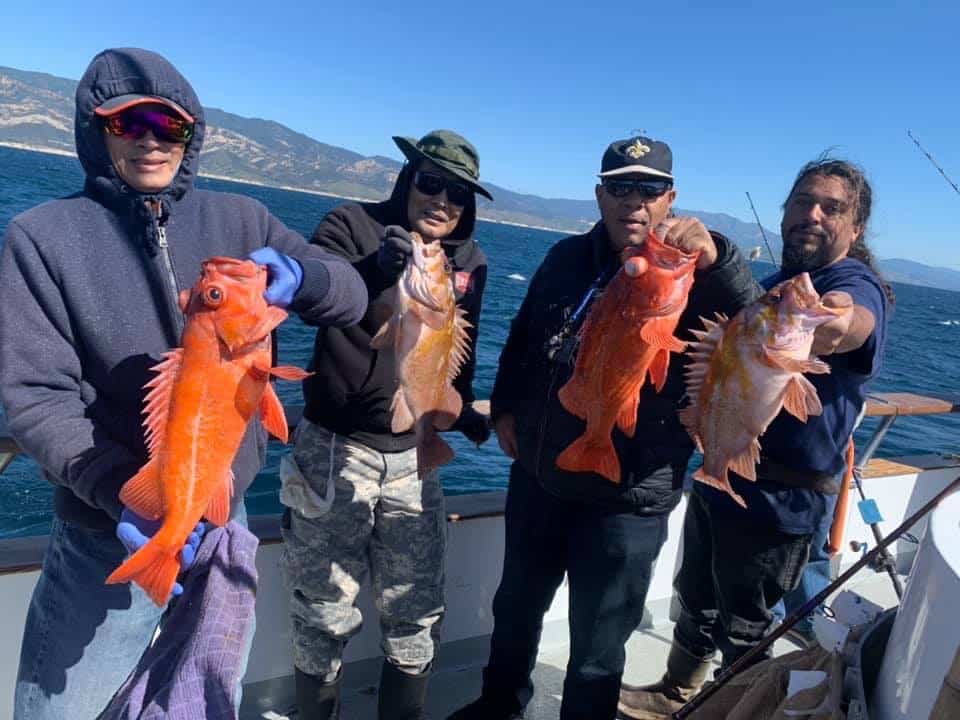 In hopes of clearing things up a bit for anyone that’s planning a rockfish trip, I dedicated this week’s Navionics Chart to my rockfish rating system. 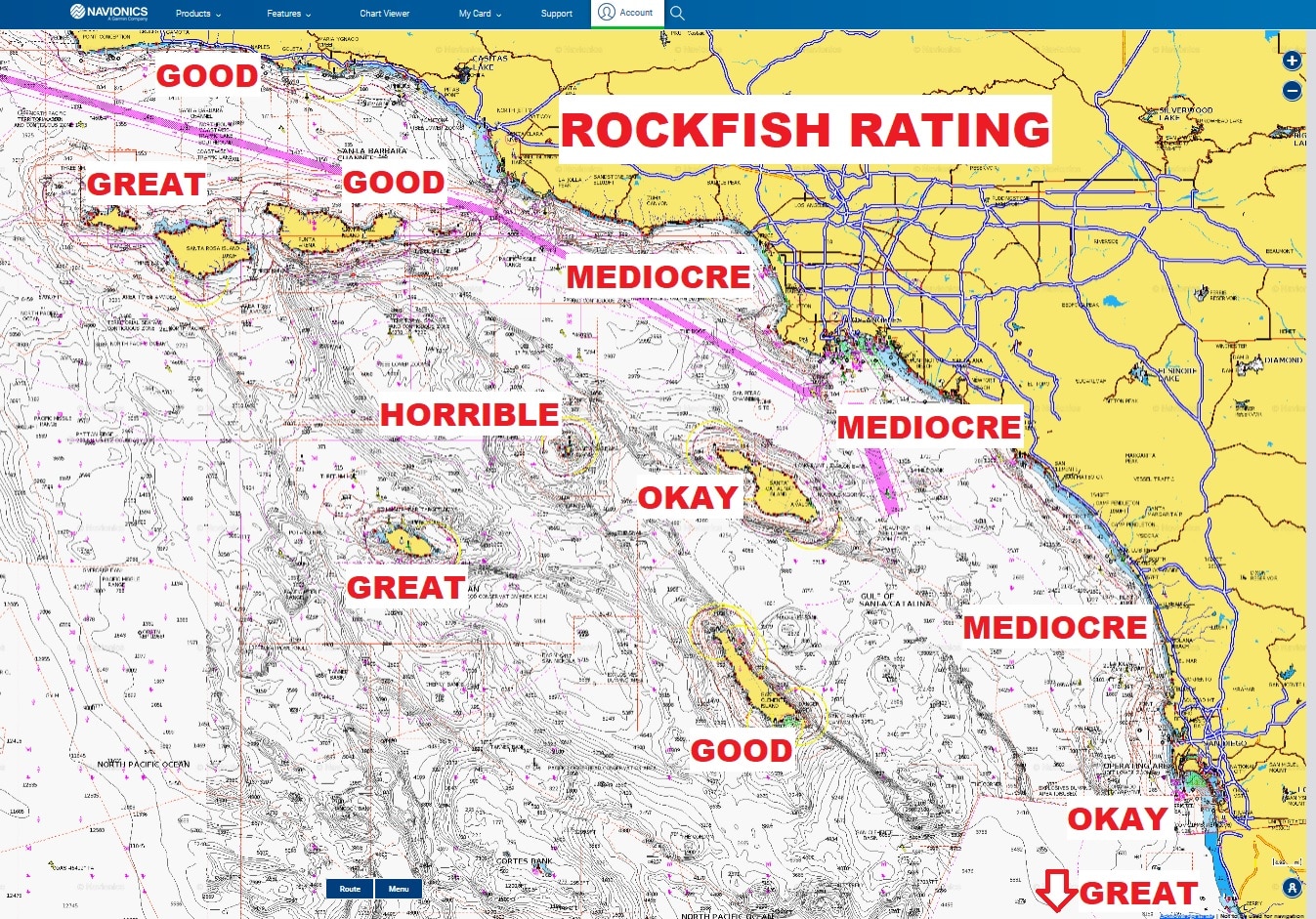 The ratings I’ve given are based on a number of factors including; size of fish, quality of table fare, ease of access, depth of water fished and willingness to bite an artificial lure. These ratings are intended for informational purposes only and I offer no guarantee or warranty that what you experience on your next trip will match up with my expectations or prognostications. Also, I want to apologize in advance to any captains who’s area of operations falls within one of the lower rated zones, just because the fishing is mediocre doesn’t mean that you aren’t good at your job (Aaron Graham).

Let’s get started! I chose this picture of a big sheephead that Scott Summersgill recently caught because it highlights that not all rockfishing (yes, I know that a sheephead isn’t technically a rockfish) happens in deep water. As a private boater, I make an effort to do all of my rockfishing in water less than 200-feet and in areas where the fish will be willing to bite an artificial lure. While there’s no artificial lure in this photo, I talked to Scott about it at the Fred Hall Show yesterday and he assured me that there was a clear with red flake 4-inch Big Hammer lure stuck somewhere behind those big gnarly dog teeth.

Scott’s sheephead was caught while fishing Santa Cruz Island, which is the second Channel Island from the bottom. I mention it’s orientation because the rockfish bite at the Channel Islands improves as you go from bottom to top. I classified the rockfishing at Anacapa Island and the east end of Santa Cruz as good because if you head out there you’re likely to get a limit of red and copper rockfish. The reason I didn’t rate it higher is because you’re likely going to be fishing well over 200-feet and are probably going to need to use bait to catch them. The west end of Santa Cruz, as well as Santa Rosa and San Miguel got a great rating because there are bigger fish to be caught in shallower water and they are always willing to bite an artificial lure.

I’ve made several trips to Santa Rosa over the last couple seasons and while it took some looking around was always able to locate some quality reds that were willing to bite an 8-inch MC Swimbaits Slug on a leadhead in less than 150-feet of water. I was also able to catch copper rockfish and lingcod in water as shallow as 20-feet. If you’re heading up there on a sport boat you’re probably going to fish water over 200-feet but will be rewarded with big reds, coppers and the occasional large lingcod. If you’re interested in learning how to find rockfish on your boat you should check out this video tutorial. 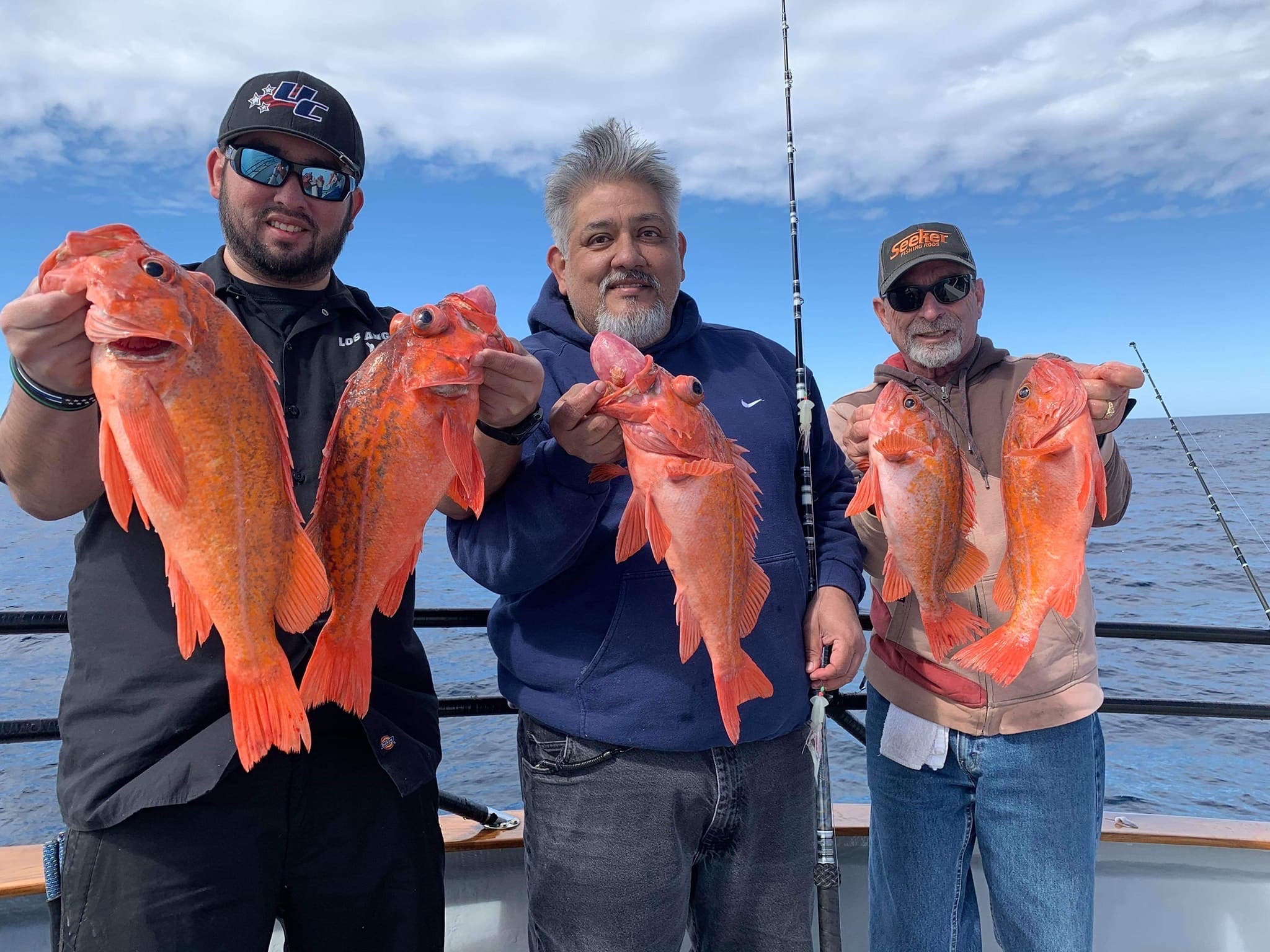 Moving back in to the coast, there is some amazing rockfishing to be had between Point Conception and Santa Barbara harbor. That being said, I only rated it as good because the best areas are a long run from the harbor and they are on the deeper end of my fishing comfort zone. Another factor up that way is the current that wraps around Point Conception, which at times can be strong enough to make getting an artificial into the bite zone almost impossible. The coast from Ventura harbor down to the Mexican border gets my lowest rating because it gets the most fishing pressure. This fishing pressure means that boats are usually fishing way deeper than I have any interest in dropping and are using bait to catch a mix of rockfish that can be bocaccio heavy at times. If you’re looking to spend a half-day on the water fishing, then by all means book a trip, but if you want to fill your freezer you’re better off going somewhere else. 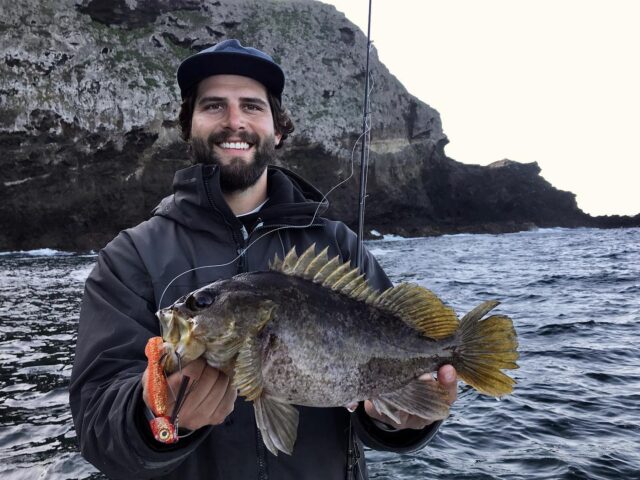 Getting back to the islands, I labeled the Dirt Clod as horrible because it is. The last time I fished cod there I had to drive all over the place for eight hours before locating a 50-yard stretch that produced wide open fishing. While finding that last minute bite felt very rewarding and made me want to go back and do it again the next day, by the time I got home I realized that the island let me catch those fish to trick me into coming back out and catching nothing.

If there’s one piece of advice I want everyone to take away from this article is that the Dirt Clod is not your friend and any good reports you hear about it are lies.

I rated San Nic as great even though its further offshore than I’m willing to risk running in my boat. Due to being located in the Cowcod Conservation Area, all fishing must be done in less than 240-feet of water. Speaking of depth restrictions, they are in place everywhere and it’s your responsibility to know where you can and can’t fish. Check out this article that explains how to figure out the complex regulations. In other good news, the island’s rockfish get so little fishing pressure that they are usually big and always willing to bite an artificial lure. While I don’t really fish sport boats anymore, if I were going to get on one, it would be for a trip to fish rockfish at San Nic. 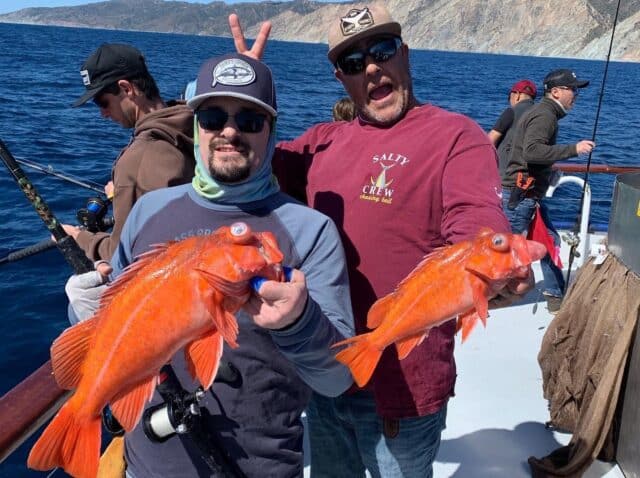 There are plenty of big reds to be caught at San Clemente Island but the depth of water involved and the abundance of less desirable rockfish kept the rating down to good. I’ve spent quite a bit of time fishing rockfish at the island on my boat and have had good fishing shallow but anything under 150-feet you usually catch too many calicos and anything over it you catch to many bocaccio. If you bring your descending device and don’t mind picking through the junk you can put together a nice limit though.

Catalina is a lot like Clemente except that the reds are usually smaller. Deep water, lots of junk and bait fishing. I rated it as okay but wouldn’t go there myself. The last area of coverage is in Mexican waters. The 9 Mile Bank can produce some nice reds, but it’s way too deep for my taste. The Coronado Islands and the Rockpile can also have great fishing, but the permits involved with fishing down there are prohibitive enough that private boaters are better off towing their boat up north to Santa Barbara. Finally, I rated the rockfishing down at Colonet as great, not only for the size of the fish caught, but because it’s usually done in conjunction with yellowtail fishing.  That’s about it for this week, we’ve got a little rain in the forecast next week but not much wind so get out there and load up on some cod!