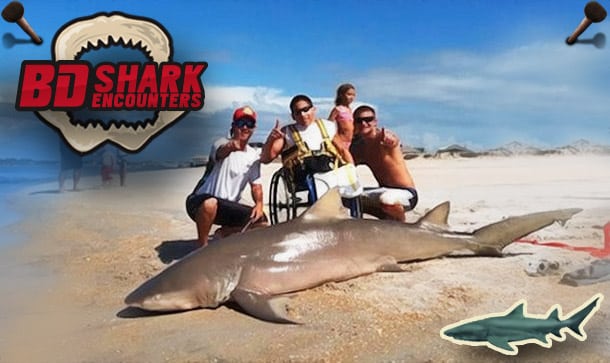 The place was Vilano Beach, Florida, and the angler was 19-year-old Matt Sechrist. Born without legs, but plenty of drive to succeed , Matt and his friends set out to catch him a shark from the beach. Family friend Ed Parrish helped plan the trip, and was the volunteer who kayaked the bait of fish heads out a couple hundred feet.

Matt’s father, David Sechrist took the first round to help wear the shark down a little, but there was plenty left for Matt who battled the shark with the help of a fighting harness around his chair. After an hour battle, the eight-foot, 250 lb lemon shark was pulled into the shallows. A quick picture with his catch and the fish was released back into the Atlantic.

“That’s a memory that I’ll be able to keep forever. That’s a special moment that I can use. Just one more thing on the resume of things that I’ve done.”

Catching the shark joins the growing list of accomplishments of this determined young man. He has been skydiving, water skiing and wrestled.

Matt is about to start college at Edinboro University in Pennsylvania and hopes to play wheelchair basketball. His major will be in human performance.