With the Kona marlin tournament season coming up soon, lots of talk turns to where anglers have the best chance of catching the biggest blue marlin in the world. Although some years in Kona are better than others, it is never wise to bet against Kona marlin. However, this is one year where betting on Kona may be where the smart money goes.

By now, everyone has heard about the eruption on the lower east flank of Kilauea volcano, on our Big Island of Hawaii. There is no lava or eruption action on the Kona side, so it’s life as usual along the leeward coast – except the fishing has been better than “usual” – especially when compared to the first parts of last year.

From New Year’s Eve through May 1, the “unofficial” count for blue marlin 500-pounds or better appears to be:

That’s pretty dang good! What other fishing hole can boast numbers like that of blues over 500-pounds? We doubt that this list is comprehensive, and are pretty certain there are more fish we don’t know of.

Of course, this count does not take in all the Kona marlin smaller than 500 caught so far in 2018. In addition to the rather large ones, nice reports of multiples in one day are also coming in, like the 4 blues and a spearfish, May 8 on Blue Hawaii.  Luna was 4/6 on blues recently and went 2/2 on blues on May 5.

Blue Hawaii was 4/4 on blues last week.
Spearfish are being caught by the droves, nice ahi are coming up in the blind and a couple of handfuls of stripeys larger than 100-pounds (big for Kona) have also been reported.

Sapo has only been out 3 days in May and tagged 3 blues and 5 spearfish.  Marlin Magic and Northern Lights have been catching steadily all spring, just to mention a few.

Birds and bait are ever increasing so all is well along the Kona coast, fish-wise.

All we need now is for Pele to take a break, and we can return to being “imparadised”. 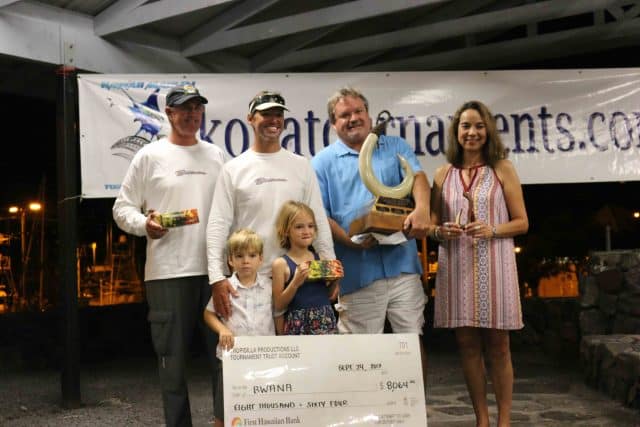 The $1.5 Million Hawaii Marlin Tournament Series gets underway on the last weekend of June with the Kona Kick Off tournament. Starting the next weekend “Million Dollar Week” gets underway in earnest when the Firecracker Open, The Kona Throw Down, the World Cup and the Skins Marlin Derby all run back to back. 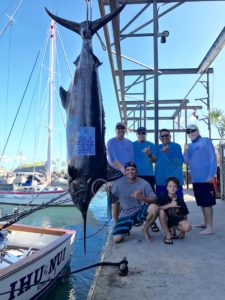 To enter online in our key-in system – or to print an old fashioned PDF entry form to mail in with a check, click: http://konatournaments.com/events/

For more information on Kona marlin fishing or tournaments contact: