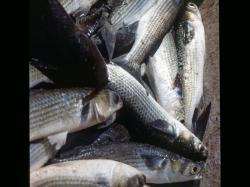 I’m happy to report that as of this afternoon, higher authority has overturned the ruling that was preventing the enforcement of the net ban and the net ban is back in effect. It is refreshing to see some sense still left out there.

I feel obligated to forward this letter written by Frank Sargeant, a long time outdoor writer and editor. Recently a local judge has overturned the will of the people of Florida and allowed the resurrection of mass, indiscriminate harvest for the first time in over twenty years. It’s not that commercial fishermen couldn’t catch mullet, they were simply required to use cast nets, which by nature do not catch or maim the wide variety of non-target fish, such as redfish, trout and snook. They simply want more. Hopefully common sense will catch up with this ruling, but common sense is getting to be “not so common anymore”.

Its time for the anglers and concerned citizens alike to mobilize and let the will of the people be heard once again! Mullet are the primary target of gill netters, and some 22 million pounds were caught annually up to the time the nets were banned 18 years ago, drastically depleting

Here we go again. In a classic example of “home cookin”, Florida Panhandle commercial fishing interests got Leon County Circuit Judge Jackie Fulford to agree with their long-held contention that there is something, some way, some how, wrong about protecting Florida’s fisheries from gill nets.

As it stands now, what has been law for almost two decades-with remarkably good results for Florida’s fish populations-is out the window, and a portion of the Florida Constitution-voted into place with approval of the vast majority of the state’s citizens–has been overturned by an oddly-reasoned ruling from Fulford. As this is written, tens of thousands of pounds of fish are being hauled out of the state’s waters with gear that just days ago was completely illegal even to have on a boat in Florida’s waters

.In one of the more bizarre parts of the suit, Ronald Mowrey, the Tallahassee attorney who represents the commercial fishermen, said Fulford’s ruling was based on witness testimony and the judge’s own first-hand observation that the nets FWC forces the commercial mullet fishermen to use “do a poor job of catching legal-sized fish and cause the unnecessary killing of juvenile fish.

“Got that? The commercial fishermen-who pretty much had inshore fish stocks of mullet, trout and reds wiped out when the net ban went into place in the middle 1990’s-are concerned about unnecessary killing of juvenile fish!

Now, to her credit, Judge Fulford went out with the commercial fishermen and saw how they operate-and being the knowledgeable watermen that they are, you can bet the netters sought out a school of undersized fish, roped ’em up with the 2-inch mesh and gilled heck out of them, thus proving to Fulford that the net ban is a bad thing. But in normal fishing, the last thing these guys want to do is drop the lead on a school of undersized fish-and they rarely do it because it wastes fishing time. Gill nets can also be used offshore for species such as Spanish mackerel and king mackerel.

Of course, a lot of commercial gill net fishing was done at night, and will be again if Fulford’s awkwardly-reasoned ruling is not overturned during the review already launched by the legal arm of Florida’s Fish & Wildlife Conservation Commission.

But the netters know that fish school by size, and particularly during the late fall and early winter roe mullet season when net fishing was most successful-and when cast-netting now is highly successful-there are hardly any undersized mullet to be found in the area where the fishermen congregate, at river and bay mouths as the fish make their run to the sea to spawn.

The damage a gill net does is not to small fish, but to large ones not legal for harvest in commercial quantities by net, including snook and redfish. Not only is the net ban a useful and reasonable way to control excess harvest, it has not prevented commercial fishermen from harvesting millions of pounds of mullet each winter using mostly castnets. Some of these netters make thousands of dollars in a single day when the fall and winter mullet run is on. But they want more.

To determine whether current rules, now in place for nearly 20 years, are having a positive or negative affect on Florida’s inshore fisheries, one has only to look at populations of inshore fish-mullet are perhaps at an all-time modern high, trout are larger and more abundant than they have been in 40 years in much of the state, vast schools of redfish again prowl both inshore and offshore waters, pompano are coming back strongly along the beaches and even “junk” fish like jack crevalle, which also used to be heavily targeted by gillnetters in winter when the mullet were gone, have come back strong. Net fishermen sometimes wade their nets out in shallow water to surround fish and trap them against shorelines.

Part of this restoration of Florida’s inshore fisheries is, to be sure, the result of restrictive harvest regulations on recreational-not commercial-fishermen. But a major part of it is also clearly the result of the net ban. And further, having the netters no longer buzzing the flats day and night has been a huge benefit to recreational anglers, and to the fish that must feed, rest and spawn in the shallows.

One knowledgeable commercial fisherman with a gill net can do more damage to fish stocks in one night than a hundred recreational anglers fishing for weeks with hook and line, which is the reason that the nets have to be controlled so carefully.

Studies have shown the majority of fish caught by recreational anglers are released to fight again-and to spawn more of their species. But the nature of commercial fishing is that the fish must be harvested to produce income.Gill nets caught over 20 million pounds of mullet a year at the peak of the gill net fishery, and netters followed the spawning runs in a wave, which concentrated them in certain areas during the prime times-creating considerable “user conflict” with recreational anglers, to be sure.

Netters from as far away as Texas and Louisiana poured into Florida to cash in on the bonanza. One of the great concerns with putting gill nets back in the water is this: give a man a hammer and he will go looking for a nail. When the mullet runs are done, the gill netters will seek out other species-trout, reds, pompano-and even snook, sold at the back door of restaurants regularly back in the bad old days of net fishing, and appearing on the menus as anything from grouper to gray snapper. Cast netting has remained legal during the gill net closure, and commercial fishermen have captures about 8 to 9 million pounds a year with the tactic, without harming fishery resources.

Commercial limits, if enforced adequately, should control harvest of fish targeted most by recreational anglers. But there’s the rub-when the onslaught of netters hits, there’s no way for Florida’s limited number of enforcement officers to keep reasonable control of the take.Because gill netting works best after dark, when the fish are often schooled tightly in shallow water and the fish can’t see the net, enforcement is doubly difficult for Florida’s understaffed FWC law enforcement arm.

The good news is that the FWC legal advisors feel that superior courts will get rid of this case of “home cookin'” as they have numerous other attempts by north Florida netters in the last 20 years, preserving the net ban amendment and with it the fisheries of Florida’s inshore waters.

But in the meantime, bad things are happening to Florida’s fisheries tonight, and will continue to so long as the very harmful rule of Judge Jackie Fulford stands.

One more thing: It’s likely no accident that Fulford was inveigled into this ruling at this particular time of year; the mullet run is at its peak on Florida’s west coast, with millions of spawning fish massed tightly as they push out of the estuaries to head for the offshore spawning grounds-the slaughter will be enormous, and probably the only thing that will slow it is that the fish houses will be unable to handle the volume, and will drop the prices accordingly.

While the commercial fishermen tell the general media they are fishing to put food on the table for U.S. consumers, in fact it’s all about mullet roe, which is shipped in total to the Orient. A small portion of the actual fish go to markets here, but most wind up in crab traps.

You can read more, and join the petition drive to get the nets off the water, at http://www.activistangler.com/journal/2013/11/6/nets-once-again-threaten-floridas-fisheries.html