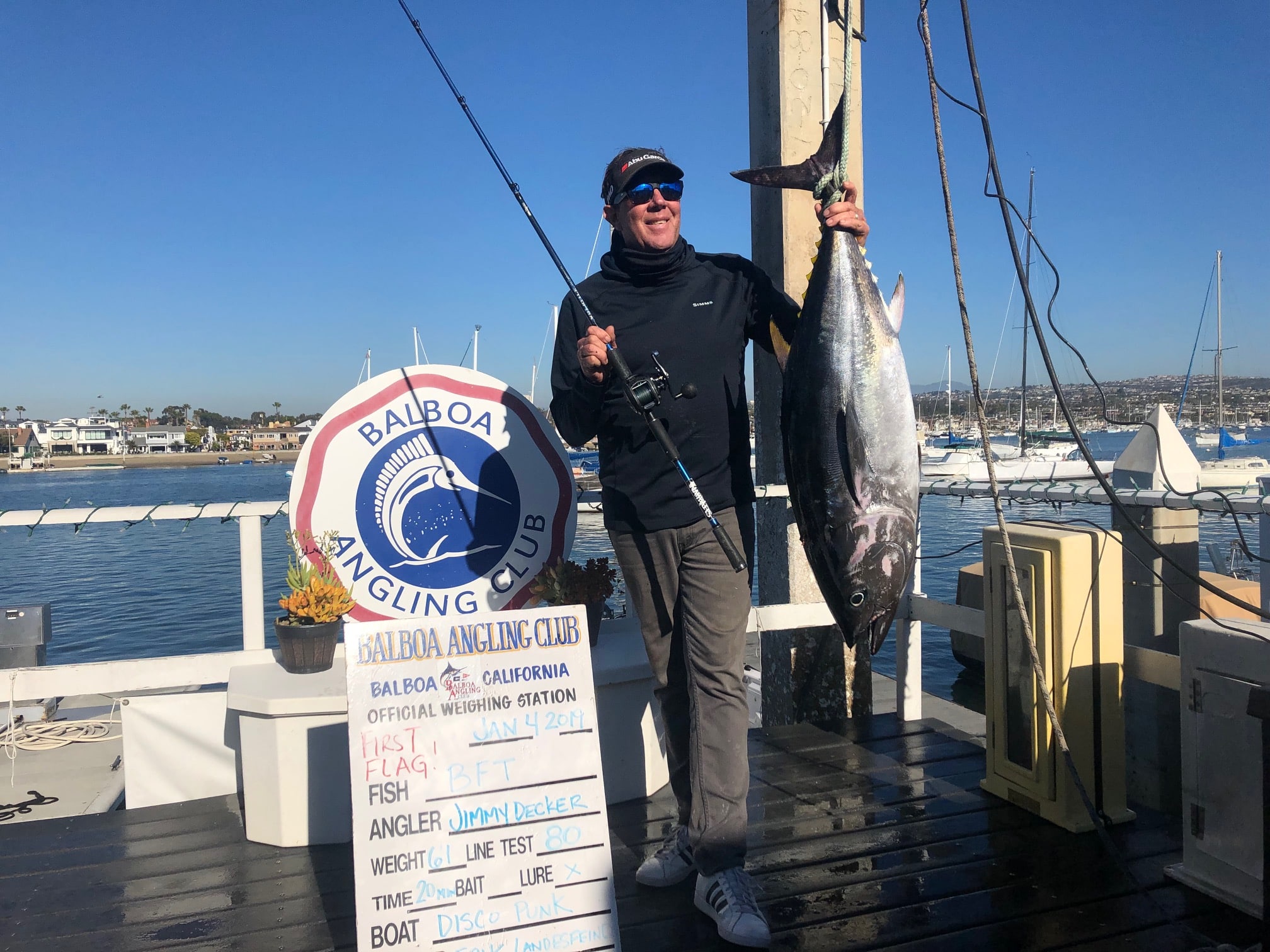 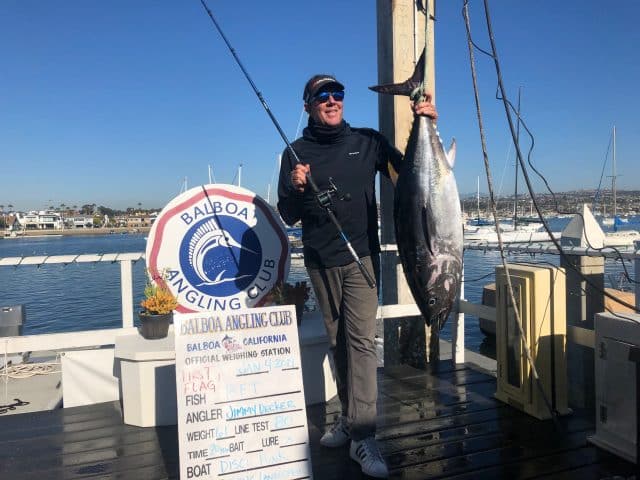 If nothing else, the last five crazy years of fishing in Southern California have led to many conversations I’d never thought I’d be having. The latest happened on Friday morning as Decker and I were idling through Newport harbor and discussing why I didn’t think running to the rigs was the best plan for finding the bluefin tuna since there were likely fish much closer to the harbor.

When it comes to offshore fishing, “much closer to the harbor” is a unit of measure usually reserved for comparisons like the distance to the 277 versus the 289 or the 14 to the Mackerel Bank. In this case, it referred to the finding tuna somewhere closer than the whole 12-miles we’d need to run to make it to the rigs. Add to that the fact that it was January 4th and I can assure you that never in a million years did I ever think that I’d ever be in a situation that would result in me voicing these I did, but there I was and later that morning my prognostications were proven correct.

Welcome to the new normal! If nothing else, the perpetual state of incredulity the last five years have left anglers in, has made for some great adventures and good memories. Friday’s trip ended up being just such an adventure and you can read all about it here. 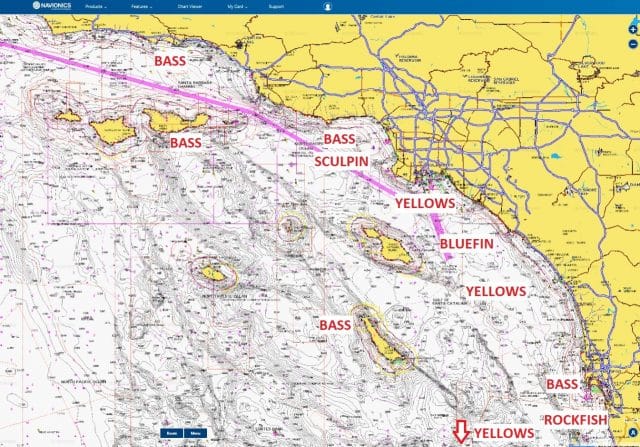 This week’s Navionics Chart looks about as un-January like as chart get but that’s a good thing. Starting with the offshore report, there are bluefin stretched along the coast from Long Beach to South Orange County and have been hooked in as shallow as 250-feet of water. The fish, which showed best around the new moon over the weekend, haven’t been popping up the last few days but if they stick around will likely be up and biting again come next weekend as we come up on the full moon on the 21st.

There are yellowtail being caught off kelp paddies on our local banks and out off Catalina. The fish are mostly 5 to 10-pounds but I guess when it comes to kelp paddy fishing in January beggars can’t be choosers. The yellows are still popping up around the 150 from time to time and the sport boats got a few earlier this week but these fish aren’t really sport boat friendly. It’s been a first thing in the morning deal with these fish and it’s mostly over before the sport boats get out there. Skiff guys should plan on being there at dawn with a surface iron rod and a pair of binoculars. This is run and gun fishing that ends early in the day so you’re going to need to cover a lot of water fast if you want to find the fish before its over. 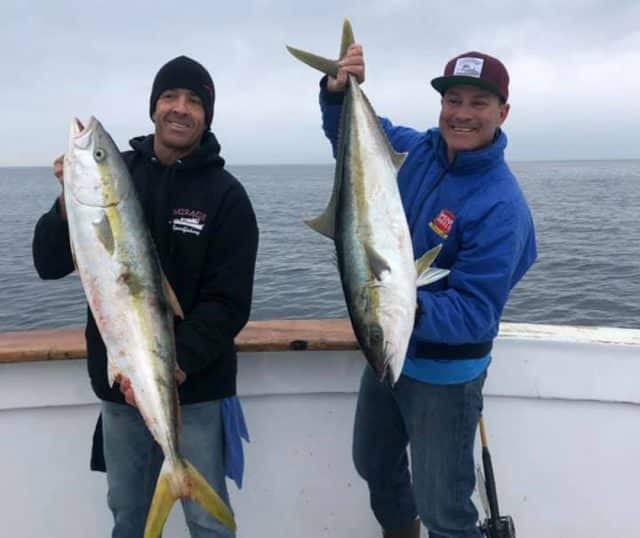 Yellows are also biting for the 1 1/2-day trips fishing Punta Colnett. The boats are finding 15 to 20-pound yellows on the high spots and smaller kelp paddy fish offshore. Recent trips, like the one pictured aboard the Pacific Queen last weekend, are also reporting excellent rockfishing. There are lots of boats online this weekend and the weather looks good to make the run, so go catch some fish! 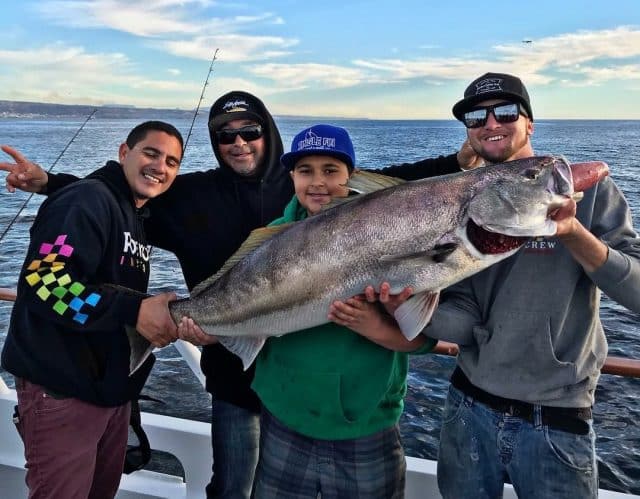 Yellowtail aside, the coastal bite isn’t all that exciting with most boats focusing on Sand Bass and sculpin to fill the bags. Live squid is the key to getting the bass fired up so sport boat anglers should try and get on boats that have it as bait. The bass are also biting for the San Diego 1/2 day boats and they are getting some bonus fish, like this big seabass caught aboard the Dolphin earlier this week. 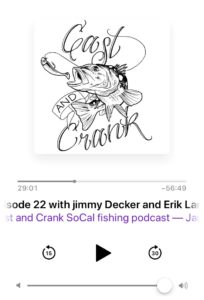 If you haven’t already checked it out, I recommend tuning into the Cast and Crank Fishing Podcast. Nick and Justin, the show’s hosts, have different guests in the studio each week to talk about fishing in Southern California. They asked me to be on the show so I listened to a few of their first podcasts and loved it. In fact, their interviewing style and the flow of the show kept me tuned in and interested in listening to guys talk about fisheries that I thought I’d have zero interest in hearing about. These guys are putting in the effort to make this show happen each week out of nothing other than their love for the sport and it shows. Episode 22 is an interview with me and Decker that lasted an hour and a half but could have just as easily gone three or four hours. The show is free and is available on iTunes, Spotify and Stitcher. You can also follow the links from their Instagram page. Give their show a listen, you won’t be disappointed.