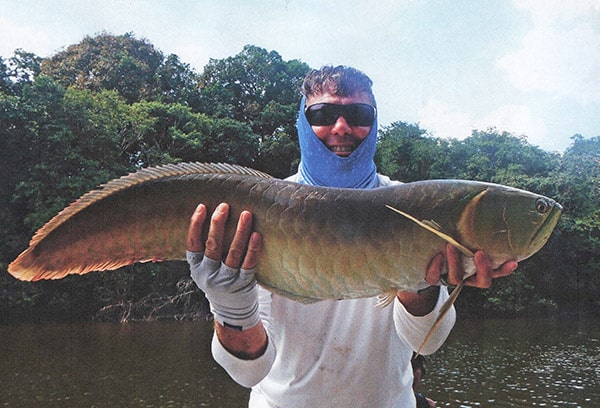 Fly anglers have been putting in some record-class fishing effort recently – this month’s IGFA Hot Catches highlights of potential new world records feature three catches all caught on fly rods. Check out the two peacock bass and the arawana caught in Brazil, Colombia, and Guyana, all contending for World Record titles.

Meanwhile, the saltwater world is abuzz with news of a potential new All-Tackle record Pacific bluefin tuna caught off the coast of New Zealand. 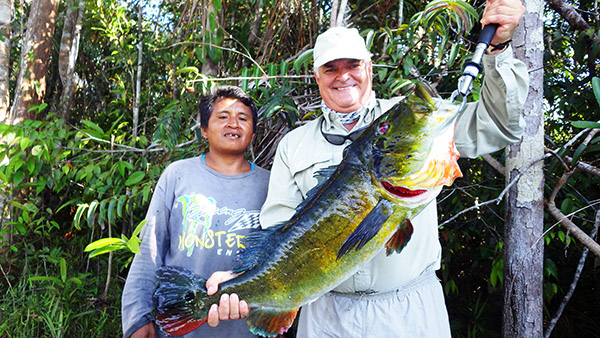 Freshwater Venezuelan angler Eduardo Aristeguieta traveled to Mataven, Colombia where he caught an impressive 8.16 kg (18 lb 0 oz) speckled peacock (Cichla temensis) while fly fishing on December 4, 2013. Aristeguieta hooked the trophy peacock on a green hornet fly and needed nearly 10 minutes to subdue the fish on 4 kg (8 lb) tippet. With the current record in this tippet class standing at 7.4 kg (16 lb 5 oz), Aristeguieta’s fish could earn him a new world record. 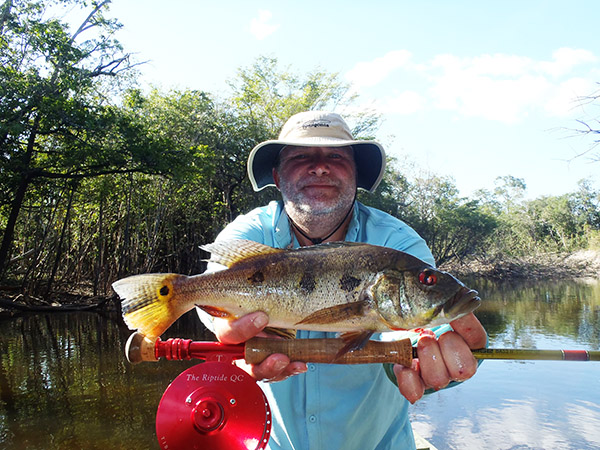 Richard Hart recently submitted the first All-Tackle Length application for Orinoco peacock (Cichla orinocensis), with a 35 cm specimen he caught on January 21st while fly fishing Brazil’s Aqua Boa River. Hart needed five minutes to boat the fish after it ate the baitfish pattern he was throwing. The current IGFA record is vacant. 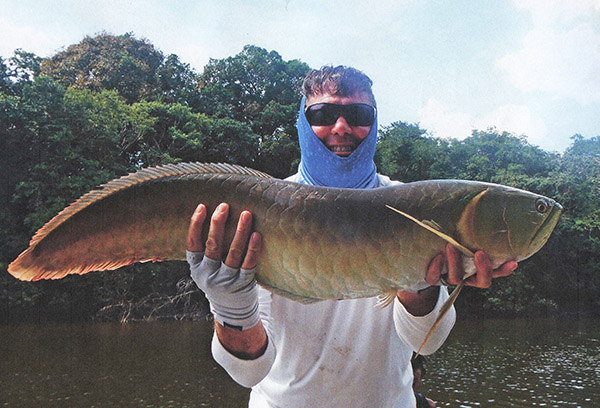 IGFA Representative Peter Binaski of Huntington Beach, California traveled to Guyana at the end of 2013 to target some of the exotic freshwater species found in the remote South American jungles. Binaski was not disappointed, as he caught am 84 cm potential All-Tackle Length record arawana (Osteoglossum bicirrhosum) on November 17th while fly fishing on the Essequibo River. After coming tight on the fish, Binaski needed 10 minutes to subdue the trophy arawana, which was released alive after being properly documented. The current IGFA record stands at 67 cm. 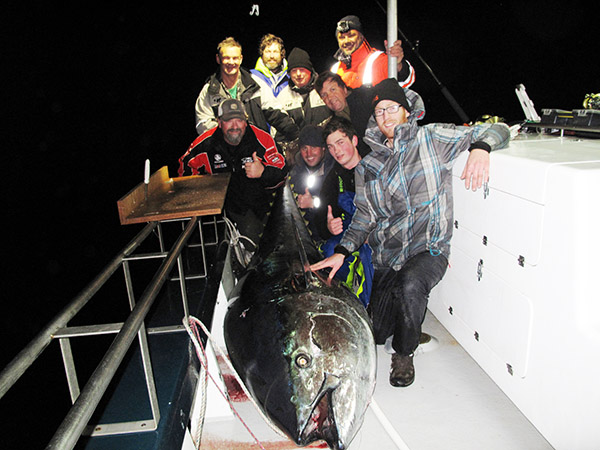 Saltwater Kiwi angler Kevin Baker potentially set the new All-Tackle record for Pacific bluefin tuna (Thunnus orientalis), with a 352.5 kg (777 lb 1 oz) fish he caught on September 14, 2013 while fishing off the coast of Greymouth, New Zealand. This massive tuna hit during the final hours of Baker’s multiple day fishing trip aboard the Cova Rose, captained by Lance Goodhew. After marking fish on the sounder, Baker fed a fresh hoki back through the chum line and almost instantly came tight on the big fish. With the trip nearly at its end, Baker was pressed for time and was forced to put serious tension on the fish – at times bumping the drag on his Shimano 130W up to 37 kg (80 lb) during the intense 30 minute fight. Baker and the crew were prepared to tag the fish as they had with several previous catches, but once it was boat side the decision was made to take the fish as it was the biggest specimen any of them had ever seen. Tipping the scales at 352.5 kg (777 lb 1 oz), Baker’s fish surpasses the existing record by nearly 20 kg (40 lb). 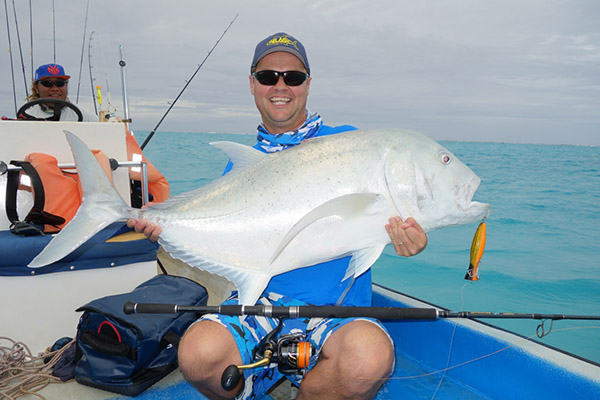 Australian angler Paul Worsteling caught and released an impressive giant trevally (Caranx ignobilis) on January 8th while casting a popper along the beautiful reefs surrounding the Cook Islands in the Indian Ocean. After the GT crushed Worsteling’s popper, the experienced angler needed 10 minutes to boat the fish. Taping out to 109 cm on the IGFA’s Official Measuring Device, Worsteling’s fish exceeds the existing All-Tackle Length record by 2 cm and could potentially earn him the new record. 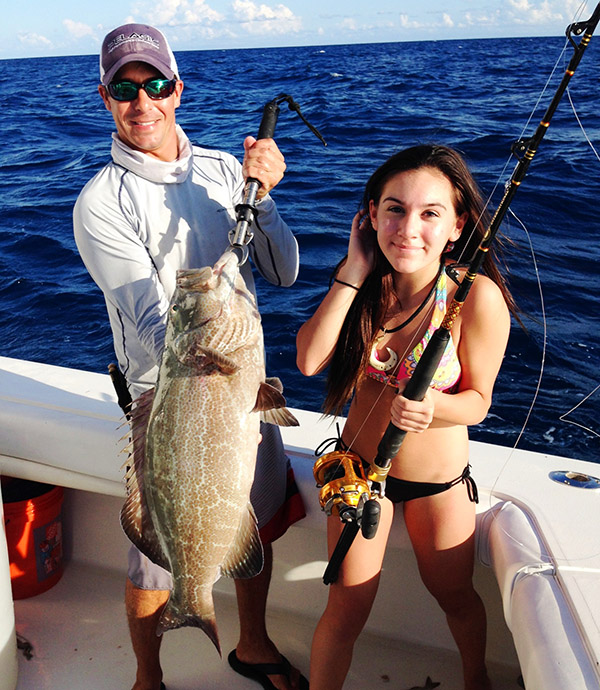 While on a holiday trip to the Key West from her home in New Jersey, angler Brielle Bennett landed a 7.25 kg (16 lb 0 oz) black grouper (Mycteroperca bonaci) on November 24, 2013 that could potentially earn her the new female Junior record. Bennett was fishing with a live grunt when the grouper engulfed her bait and headed for the bottom. The young angler was able to turn the grouper and bring it to the boat where it was quickly weighed, documented, and then released alive. The existing record stands at 6.12 kg (13 lb 8 oz). 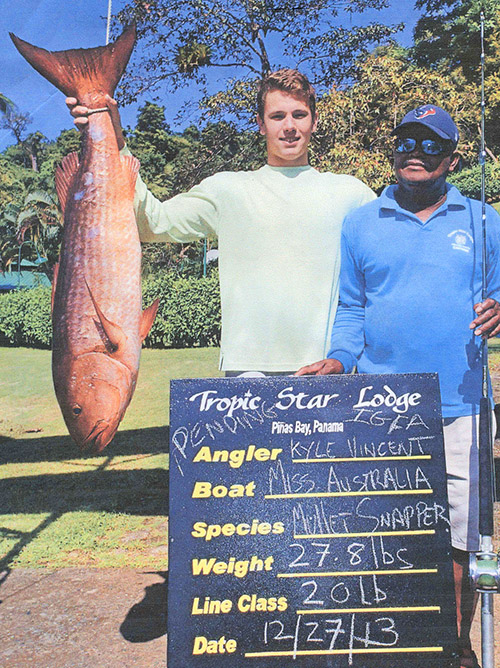 Over the holidays, angler Kyle Vincent traveled from his home in Florida to Panama, where he took advantage of the world class fishing available through Tropic Star Lodge in Piñas Bay. While fishing with Capt. Epifano Candelo aboard Miss Australia on December 27, 2013, Vincent landed a 12.6 kg (27 lb 12 oz) mullet snapper (Lutjanus aratus) while slow trolling a live bonito. Ten minutes after hooking up, Vincent had the fish in the boat and the potential new men’s 10 kg (20 lb) line class record. The existing record stands at 7.9 kg (17 lb 8 oz). 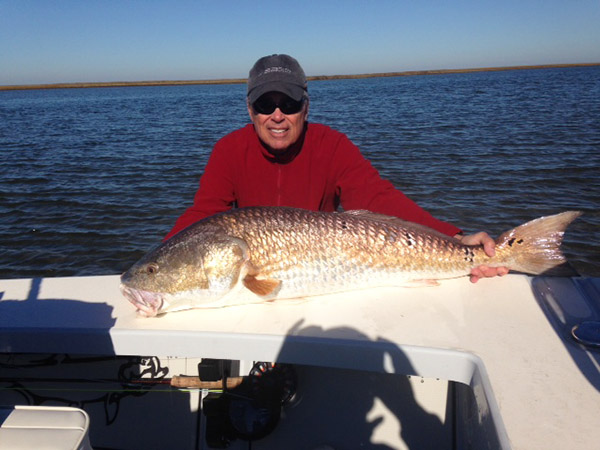 Robert Cunningham Jr., who holds multiple IGFA records, recently submitted a potential men’s 2 kg (4 lb) tippet class record for a 14.97 kg (33 lb 0 oz) red drum (Sciaenops ocellatus) he caught and released while fishing the marshes of southern Louisiana, USA. Cunningham enticed the redfish to bite with a well-presented fly – tied by his guide Bo Meador Jr. – and skillfully played the fish for 30 minutes. Once subdued, the fish was carefully weighed and documented before it was released alive. The current IGFA record is 13.15 kg (29 lb 0 oz). 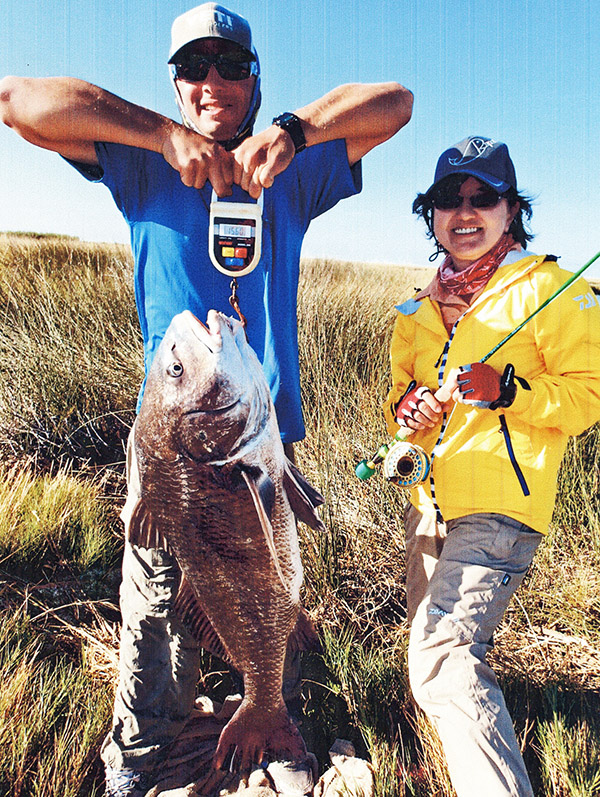 Congratulations from the crew at BD to these anglers and their potential records. You too can be ready to catch your own world class fish by visiting the IGFA website and learning the requirements ahead of time and pick a species that you might be able to target on your next trip.