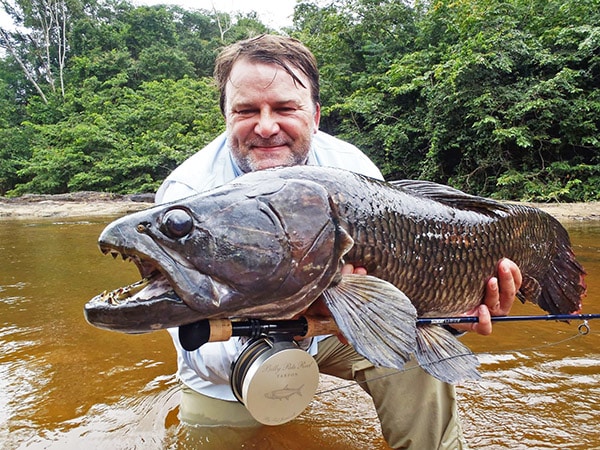 A trout hot spot, a spotted bass tournament win, and a slew of trahira are stirring interest for potential new freshwater IGFA world records this month, along with potential new All-Tackle golden mahseer and tropical gar, both of which outweigh current records by more than 10 lb.

Check out the April report to see the hottest new catches made in Costa Rica, Guyana, India, Suriname, and California and Nevada in the United States!

This month the biggest potential record in the saltwater world – literally – is the Pacific bluefin tuna caught in New Zealand that outweighs the current All-Tackle title holder by nearly 60 kg (132 lb). The April round up of potential new saltwater IGFA world records also highlights three record contenders from Australia, Brazil, and Florida in the United States. Check out the king mackerel, spotted seatrout, and southern bluefin tuna catches challenging the bar for line- and tippet-class world records, as well as that incredible Pacific bluefin tuna! On February 22nd, angler Keith Bryan potentially broke the All-Tackle record for spotted bass (Micropterus punctulatus) when he pulled a 4.73 kg (10 lb 7 oz) trophy from the New Melonies Reservoir in his home state of California. Bryan, a professional rod builder and avid angler, caught the fish while working a Yamamoto worm on a Powell rod that he built himself! Once the fish was boated after a quick three minute fight, Bryan placed it in the live well and headed back to the docks for weighing – after which he released it alive. In addition to qualifying for the All-Tackle and 4 kg (8 lb) line class records – Bryan’s fish also won him the tournament he was fishing! The current IGFA record stands at 4.65 kg (10 lb 4 oz), and was set back in 2001. During a recent trip to the exotic South American countries of Suriname and Guyana, UK angler Richard Hart racked up no less than 10 potential world records on trahira (Hoplias spp.) – also known as wolfish. One of the most impressive catches of the trip was an 11.82 kg (26 lb 1 oz) giant trahira that he caught on 8 kg (16 lb) tippet while fishing Suriname’s Kalebo River on February 23rd. Once hooked up, Hart needed an hour and 30 minutes to land the potential record wolfish, which was released alive. The existing record is 6.58 kg (14 lb 8 oz). Kiwi angler Donna Pascoe may have set the new IGFA All-Tackle world record for Pacific bluefin tuna – a 411.6 kg (907 lb 6 oz) giant that exceeds the current IGFA record by nearly 60 kg (132 lb 2 oz)! Pascoe was fishing aboard the Gladiator with Capt. Scott Sutherland off Three Kings, New Zealand on February 19th, when the massive tuna devoured the skipjack they were trolling for marlin. Pascoe battled the fish for more than four hours, and endured multiple injuries due to rough seas and winds exceeding 35 knots. The IGFA is currently reviewing the application, but if approved, Pascoe’s fish would become the new All-Tackle record, as well as the women’s 60 kg (130 lb) line class record. Angler Carol Hollander, of Oviedo, Florida, traveled to the east coast of her home state on January 23rd to fish the Mosquito Lagoon with well-known captain Troy Perez. While casting a menhaden patterned fly, Hollander hooked into a 3.18 kg (7 lb) spotted seatrout (Cynoscion nebulosus) that could earn her the new women’s 6 kg (12 lb) tippet class record. Once subdued after a spirited seven minute fight, the fish was quickly weighed, documented, and released alive. The current IGFA record stands at 1.51 kg (3 lb 5 oz). Brazilian angler Guilherme Rodrigues was trolling off Brazil’s Itzcolomi Islands on January 9th, when the Rapala he was trolling on a light tackle outfit got crushed by something much larger than he was expecting. One hour and 10 minutes after hooking up, Rodrigues landed an impressive king mackerel (Scomberomorus cavalla) that tipped the scales at 33.96 kg (74 lb 13 oz) – heavy enough to qualify for the potential new men’s 8 kg (16 lb) line class record, which currently stands at 32.31 kg (71 lb 4 oz).