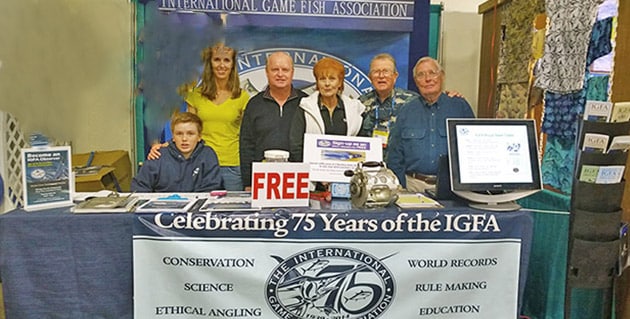 More than two dozen Representatives, Trustees, staff and members of IGFA donated countless hours volunteering to help in the booths of a whirlwind of fishing shows in March and April. Beginning with the Fred Hall Shows, both in Long Beach and Del Mar, then moving on to the Pacific Coast Sportfishing Festival and wrapping up with the popular Day at the Docks, IGFA with the help of a few of their friends managed to introduce many newcomers to the organization as well as reconnecting to the ever-growing group of West Coast members. They were there to greet and say “howdy” to IGFA members and to sign up new ones during the twelve days of shows in the four different venues. Adding to the successful four-show campaign was Zane Hinrichs Marlin Nation‘s contribution of six Bomboy Lures, custom-designed and poured by Bomboy Llanes from Kona, Hawaii, which were to be raffled to new members who signed up during the shows.

“The dedication of the volunteers and California Representatives was impressive,” Michael Farrior, IGFA Trustee and Historian commented.

“Their enthusiasm was infectious as they greeted old members and recruited new members. We can’t thank them enough for their efforts on behalf of the organization.” Congratulations to one of the lucky new members, “Michael B” Berry, San Diego, who signed up during the Fred Hall, Del Mar Show. “Wow, I’ve read about these Bomboy Lures and can’t wait to add this one to my spread this summer here in Southern California,” Berry enthused when he picked up his prize at Day at the Docks.

Lisa M. Griffith, who was recently awarded IGFA World records for bluefin tuna on four different line classes, 6, 8, 10 and 24kg., spent several hours at the Fred Hall – Del Mar show with her son Aidan, where Farrior took the opportunity to congratulate Lisa for her remarkable achievement.