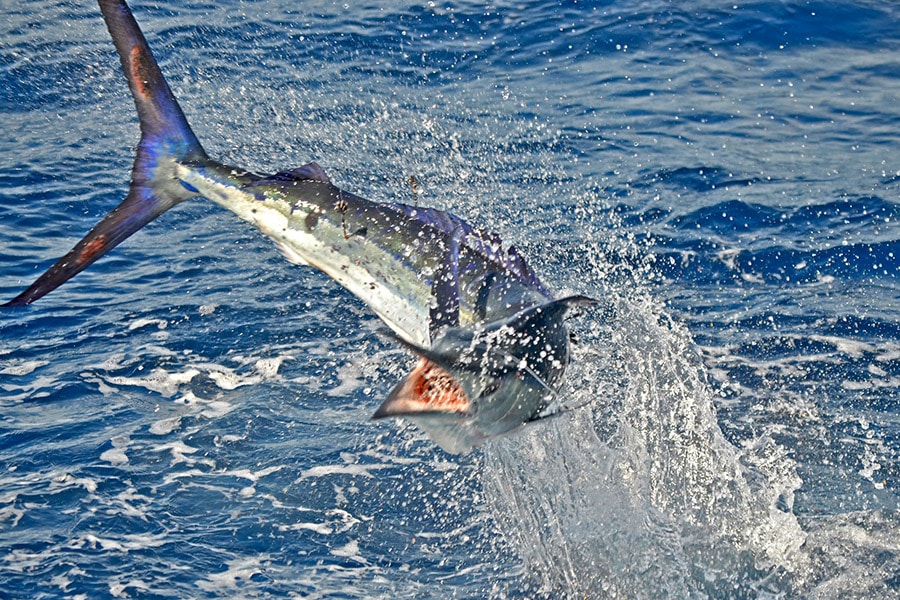 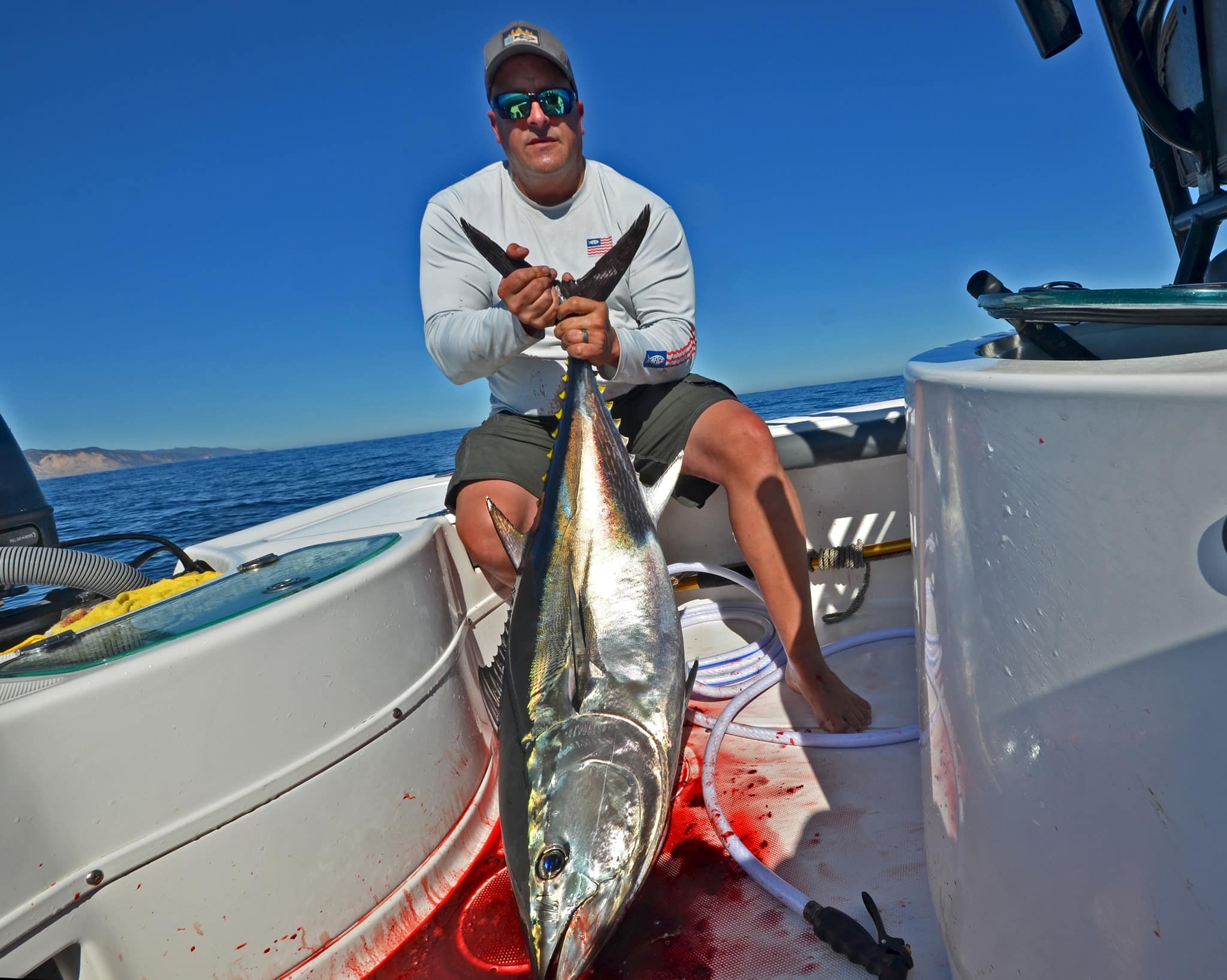 Regardless of whether I’m fishing inshore or offshore, my first question when finding biting fish is, “Why are these fish here?” When it comes to inshore fishing that question is usually very easy to answer as the fish relate to obvious structure, like a kelp bed, rock or reef. But once you head offshore, the answers offered are usually a lot more vague. Ask an offshore fisherman where he caught fish and he might tell you “at the 14 Mile Bank” or “along a color break below Catalina”. Others might just answer “they were three miles off the beach in Corona Del Mar”. While all of these answers are accurate, their lack of specificity renders this information worthless come future trips.

An example of this was a conversation I had at the launch ramp with another boater earlier this year. The guy, whose name I didn’t catch, had a nice boat that was loaded with quality gear that looked properly rigged to fish tuna. After exchanging the normal launch ramp pleasantries, he asked what I was planning on doing and I explained that I was going to run offshore and look for tuna. I’m usually pretty open with other guys at the ramp so I laid out the specifics of my plan which included, a pass across the 289 to look for yellowfin, then down the Clemente Ridge to the 43 for a shot at bluefin and then back up past the 181 to look for yellowfin on the way home if I didn’t find anything before then. The guy seemed really interested and gave enough appreciative nods and uh-huh’s, that I assumed he approved of my strategy. I realized my observation was wrong when I asked his plans and he responded, “The 14 Mile Bank! My buddy caught tuna there a few weeks ago.” I never did find out if the guy found any tuna that day, but I can tell you that the odds were definitely stacked against him given his game plan. 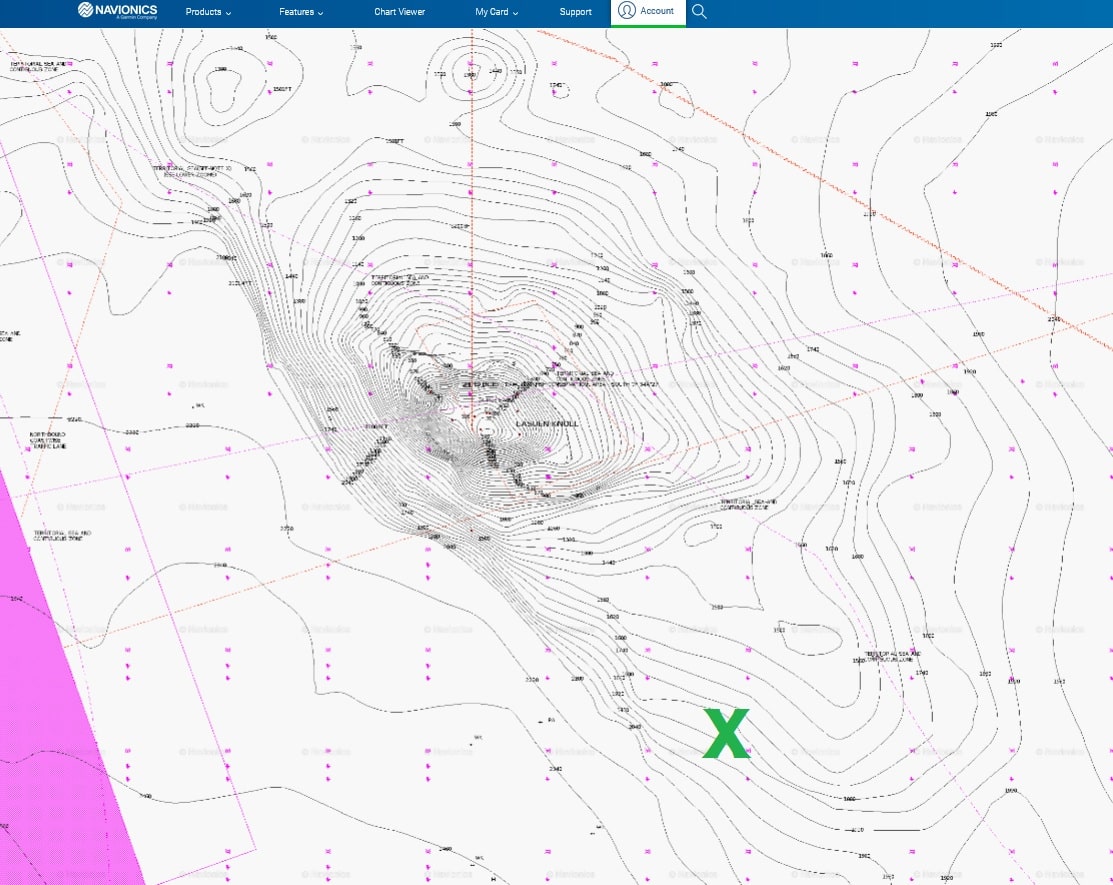 While not everyone has the time, or inclination, to look beyond running to where the fish bit yesterday, last week, or last year if you pay close attention on the water, you can identify patterns in the movements of offshore fish. Take this Navionics Chart shot of the 14-Mile Bank for example. The green X shows the location that Jimmy Decker and I found a sleeper marlin, that we caught and released, one morning in early September. We spent the next few hours working the entire bank and ended up baiting four more marlin for two bites, neither of which stuck. The interesting thing is that while we drove all over the bank and the fish we baited were hours apart, all of them came from within a few hundred yards of the green X.

Flash forward to the next week as we were again out scouting for the upcoming Master Angler Billfish Tournament. We again drove all over the place and only saw a single marlin. Yup, you guessed it, right on top of the previous week’s X. The tournament was the next week and there were several teams working the bank itself and not seeing anything. We ran down to the X and within half an hour found two marlin. While finding marlin in the same tiny spot, not related to obvious structure, three weeks in a row seems strange, it’s not nearly as strange as what happened there a couple of months later. The bluefin that had been biting along the coast in late November went MIA on an afternoon trip Decker and I took a few weeks back so we decided to run out towards the 14 and see if they went there. We started to see some birds working as we got near the bank but didn’t see any tuna. After chasing them around for a while a spot of tuna finally came up foaming and while we didn’t get bit on the couple of casts that we got into them before they sank out, when I looked at the chart we were within a hundred feet of where we’d caught that marlin in September. 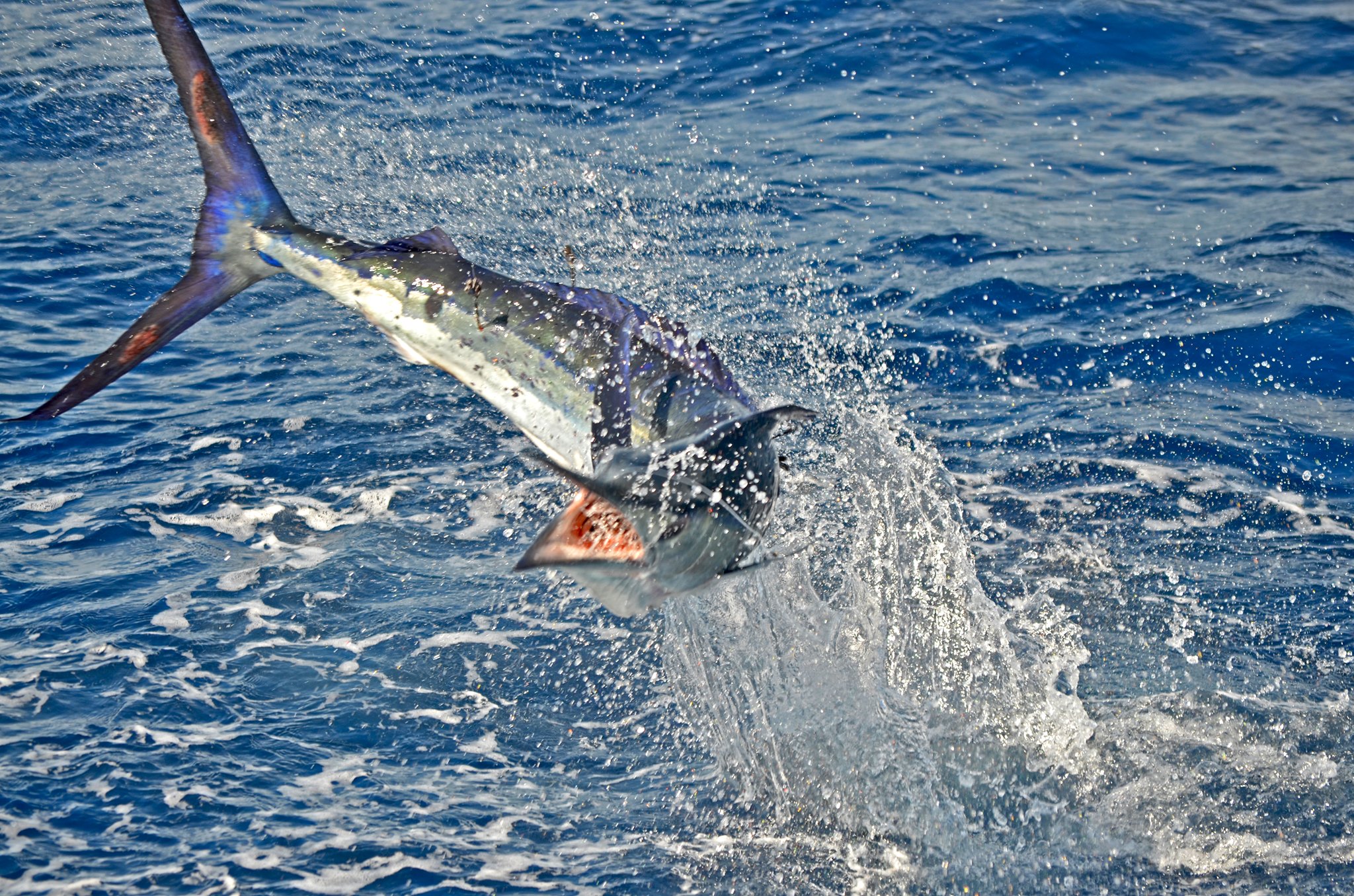 I had a similar thing happen off the east end of Catalina this fall when I was out there deep dropping swordfish. On a trip in late October we had the bluefin pop up off the edge of the 152 and while they sank out by the time we retrieved our deep drop rod, they popped up a few more times but we weren’t lucky enough to connect. We didn’t make it back out to the 152 until over a month later but as we were pulling up, I saw a quick spot of something pop up on the horizon but it was gone before I got there. There were a few dolphin around so I figured it was probably that. We were pretty close to where we saw the tuna the month before and in the right depth for swordfish, so I decided to just drop the squid there. Within a few minutes of fishing, the bluefin came up close enough to the boat that I was able to grab my jig stick and hook one without moving the boat. We spent the next few hours looking around for more tuna and hooked two more during the slack tide and all of those bites came within an eighth of a mile of the mark where the fish had popped up a month earlier. 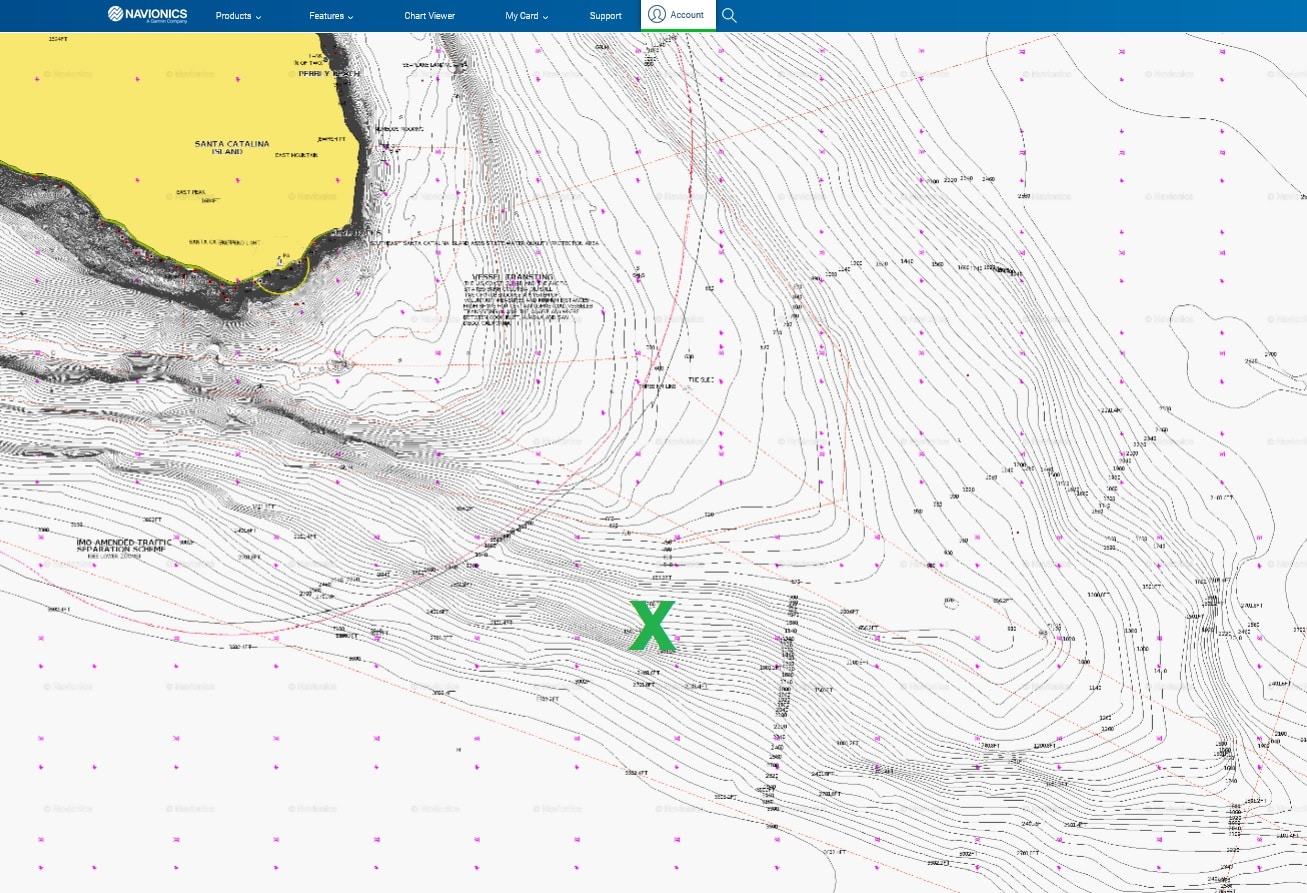 The question in both these cases is, why are fish repeatedly showing up in a specific yet seemingly unremarkable section of water. The obvious answer is that’s where the bait is. But when you consider the incredible volume of bait we’ve had in our local waters the last couple years, that answer in and of itself isn’t enough because there’s plenty of bait in many places that fish aren’t.

My theory is that, while spots like this may look like nothing on a chart, their position in relation to more dramatic topography is important. In the case of the spot off the 152, I’d imagine that the uphill current coming up the Catalina ridge creates a plankton-rich eddy that aggregates the baitfish that are traveling with the current. This, in turn, aggregates the tuna that were traveling with the same current. Identifying the spot as a reliable food source when the current runs uphill, the tuna will return there regularly to feed during their stay in our local waters.

As I said, it’s just a theory, but what’s a fact is that there are small and specific spots that will consistently attract offshore game fish throughout the year. Another example of this is the edge of the coastal shelf in Newport Harbor, where spots of bluefin have been regularly popping up for the last 11-months. I marked tuna last week in the same spot we caught one on January 6th of this year. The good news is that you don’t need to know why they are there, you just need to pay attention to exactly where they are when you do find biting fish. If you take a close look at your chart and find that the fish are relating to contour lines or major topography features, make a note and then go look in the same place the next time you’re out. Once you figure out a few of these spots, it makes prospecting offshore a whole lot easier.