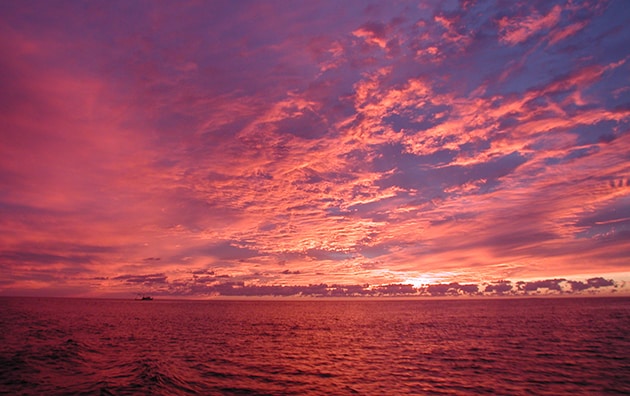 Based on data of the last decade, the last week of August and the first few days of September are the normal peak of the Baja hurricane threat with five named storms making landfall during that 10-day period. Historically, the earliest landfall of a tropical storm or hurricane on the Baja Peninsula was in mid-August. Over the last 50 years, the curve peaks in the third week of September. The threat remains high through the second week of October. Then, as clearly as the threat began, the threat drops to zero by the third week of October. The latest tropical cyclone to make landfall in the last 56 years was on October 17. But as Beatriz developed into a hurricane, all eyes have been on Mexico to see if the area will escape unscathed.

The hot barracuda bite last month has slowed down to a dribble recently, disappointing a small band of ultra-light tackle fans who are fanatical about pursuing the cherished IGFA records available on sewing-thread-sized line. There were a bunch of records set in May:

Instead of the hoped-for tuna this month, Capt. Louie Prieto’s tenacity was rewarded when after a slow morning and a variety of techniques his passengers managed to chalk up five yellows up to 23 pounds. Here’s his full report http://bit.ly/jRnXmh. After a long, cold, cloud-shrouded spring that could dampen anyone’s enthusiasm, Capt. Kelly Catain emailed me excitedly that he had a three-day charter of “roping bass” with his friends. I sensed it might be a memorable one. When I saw his slightly incoherent post after the trip, I was sure of it!

“Over 100-plus bass recycled. Yep, we put ’em back! They just have holes in their faces now!”

We’re hearing positive reports of excellent fishing for the few visitors here this time of year. Seems as though “Lots of firecracker yellows biting on jigs with an occasional mossback in the mix.”

Be sure to pack some bait-catching rigs for the mackies just outside the launch ramp. Cabrilla action is also good near the rocky points (including Punta Remedios) as well as around the islands in the bay. Here are a couple of good forum posts to check out, http://bit.ly/jdSnq3 and http://bit.ly/kC2Xxx.

Most of the pelagics seem to be in the warmer water from 5 to 15 miles beyond Carmen Island. There seem to be some good-sized dorado and sailfish if you can find them but it’s big water out there. Still a few yellowtail down deep being caught with live mackerel or jigs if you are looking for some aerobics. Also some smaller roosters and jacks along the shore south of town. On the bright side, the north wind seems to have given up for the summer. Suddenly, when it seemed like the season was off and running, off-color water and temperature changes shut the bite down. Fish were being seen every day, just not biting very well. The La Paz dorado bite resumed except the larger fish that had been the norm became smaller with an occasional nice-sized bull mixed in. Most of the action was coming from sargasso patches.

The big tuna bite was definitely influenced by the number of boats racing around on the 88.

“There were some quality fish over 100 pounds caught but not many considering the number of boats. Most of the fish that are caught are in the 30- to 60-pound class, but given the number of boats out there compared to how many are actually hooking fish, some days, it’s just not worth running that far.”

There’s still a good roosterfish bite for fish from 30 to 80 pounds. Quite a few of the fish are over 80 pounds. There’s some nice marlin hanging out as well. Interestingly, for the ones getting brought in, their bellies are full of little dorado! Check out this report http://bit.ly/lCKzVo.

The fleet fishing for the larger yellowfin tuna on the “ocho-ocho” caught a few fish up to 160 pounds but it was a long time between bites. Recently, the best action has been south below Los Frailes for much smaller fish. The 15- to 35-pound dorado action seemed to be spread throughout Las Palmas Bay.

Very cold, off-color conditions inside, especially from the lighthouse south, as low as 70 degrees, but just five miles offshore the water warms up to 84!

With the warm water outside, blue marlin are beginning to show. Several were released this week. Boats targeting billfish are releasing at least one a day, some up to five. The striper fishing has been the best off Frailes on the temp breaks. Lures, live caballito, mackerel and ballyhoo are all working. An item of note: Don’t forget your Mexican Fishing license, enforcement is currently heavy.

Jeff deBrown, Reel Baja, reported that conditions are very windy for fly-fishing and there are so many anglers on the beach, it’s making it hard to find a spot to fish. Grab a spot and you have a chance at some small roosterfish.

As I was finishing up the report I received the following message from East Cape: “Fishing has been a scratch bite but it looks like it erupted Monday. All the boats are returning with racks full of tuna flags and a few dorado as well.” Check out the full here http://bit.ly/l4EPXD.

Striped marlin are scattered throughout the area — the 950 and 1150 high spots produced the best fishing though less volume. Dorado are also spread out, usually in pairs with some nicer-sized bulls to 40 pounds. Anglers have been hooking wahoo to 60 pounds north of Punta Gorda.

Local panga fleets focused on the area from Iman to San Luis Banks. That area yielded snapper, yellowtail, amberjack and cabrilla over rocky bottom, while the surface was dominated by tuna, with an occasional dorado, wahoo or marlin passing through.

The main target species were yellowfin tuna, ranging in size from 20 pounds to more than 200!

One day the La Playita panga fleet landed 15 yellowfin tuna that weighed 100 pounds or more. The largest yellowfin tuna in recent days was a 218-pound fish that was landed off of the panga Killer with skipper Javier. The incredible part of this story was that they landed the fish on 40-pound line with 60-pound leader.

Other impressive catches included a 180-pound tuna that was landed during near gale-like conditions by angler David Goddard from Santa Cruz. He was fishing on Killer II with skipper Chame Pino.

Another local pangero landed a 168-pound tuna that hit a yo-yo jig over a rock pile where a few yellowtail to 30 pounds were hitting.

Cool water from the Pacific side wrapped itself around the Cape and all the way up to East Cape. While the water on the Cortez side of the Cape began the week in the low 80s, it ended the week in the mid-60s, a significant change. Along with the cool water came a color change with a green tinge to it the water. Add the wind in the afternoons and the associated choppy conditions and it is understandable that many charters came in around noon or 1 p.m.

Water conditions were not favorable for sardina this week so it didn’t matter where you went, there were none to be found. Most of the bait boats had plenty of mullet for sale as well as some decent caballito, and a few of them had mackerel, all available at the normal $3 per bait.Thawed ballyhoo were also available at $3 to $4 each, depending on who you bought them from.

Striped marlin were scarce for most of the boats this week though a few were scoring multiples. The two areas were in the vicinity of the 1150 and close to Palmilla point. There were a few other blues being caught before the water on the Cortez side cooled down, and after that they disappeared. Still very on-and-off fishing for yellowfin. Only those willing to expend the extra effort were rewarded with limits on tuna that averaged 25 pounds in the area just outside the 1150 and within 6 miles of the arch. Boats that lucked into schools associated with porpoise scored better catches but blind strikes were also significant. With a blind strike, and especially with a double or triple, working the area in a grid often resulted in additional hook-ups before the school disappeared.

With the cool water moving in, the bite for those nice dorado dropped off quite a bit. A few with an average weight of 25 pounds were found near the Gorda Banks area and above.

Most of the wahoo were between 35 and 45 pounds with the largest being 78 pounds. Palmilla Point and Punta Gorda as well as the associated small banks in the area were the most productive, but there were quite a few open-water fish as well.

Some roosterfish in the surf this week — nothing large except several 30-pound fish. The best method for these fish was slow-trolling live mullet. Also, since the water cooled off later in the week, some yellowtail have returned. Pangas were finding fish averaging 12 pounds around the Palmilla area as well as scattered around rocky points. A few boats were able to get grouper to 80 pounds off underwater rock piles using live caballito.

As the season moves forward, the sailfish and dorado have settled into the area. No real concentration, and they’re still spread out. As the water cleans up, the bottom fishing will improve.

The season’s first blue marlin was released earlier this month aboard Aries II skippered by Capt. Victor Nunez. Basically most of the action begins with the shark buoys seven miles offshore. Seems like the buoys that are farther offshore are holding a real smorgasbord of dorado and small yellowfin. The volume of dorado is pretty awesome allowing catch-and-release dorado all day long with light tackle or fly-fishing gear. There are also stripers and sailfish popping up in the pattern frequently. Check it out at http://bit.ly/mER9cC.

While the water clarity and temp improve, the mainstay has been football-sized yellowfin and bunches of bonito for the boats fishing. There’s good roosterfish action close to shore in spite of the windy conditions. Another good report on the forums, http://bit.ly/iJ4y8M. Seems like light tackle and the fly rod are kings right now along Mexico’s mainland coast. The few boats targeting sails are averaging one a day. A yellowfin bite going on four miles off the beach produced a nice grade of fish up to 40 pounds. Farther offshore there are some large dorado to 40 pounds.

Roosterfish action is off the charts by anyone’s standards. It is seldom that one could expect more than a handful of 30-pound roosters and some twice that in a single day if the angler has the stamina.

All in all Fishing Baja’s Hurricane Season is just about as good as it gets right now in Baja. If Beatriz doesn’t muck things up, we can expect the fishing to continue moving in the right direction.

Thanks for joining me on my latest journey. I will do my best to be your eyes and ears for the Baja fishing scene, but it’s a two-way street, and I hope that each of you will be mine. Let me hear your Baja stories by emailing them to me at [email protected].