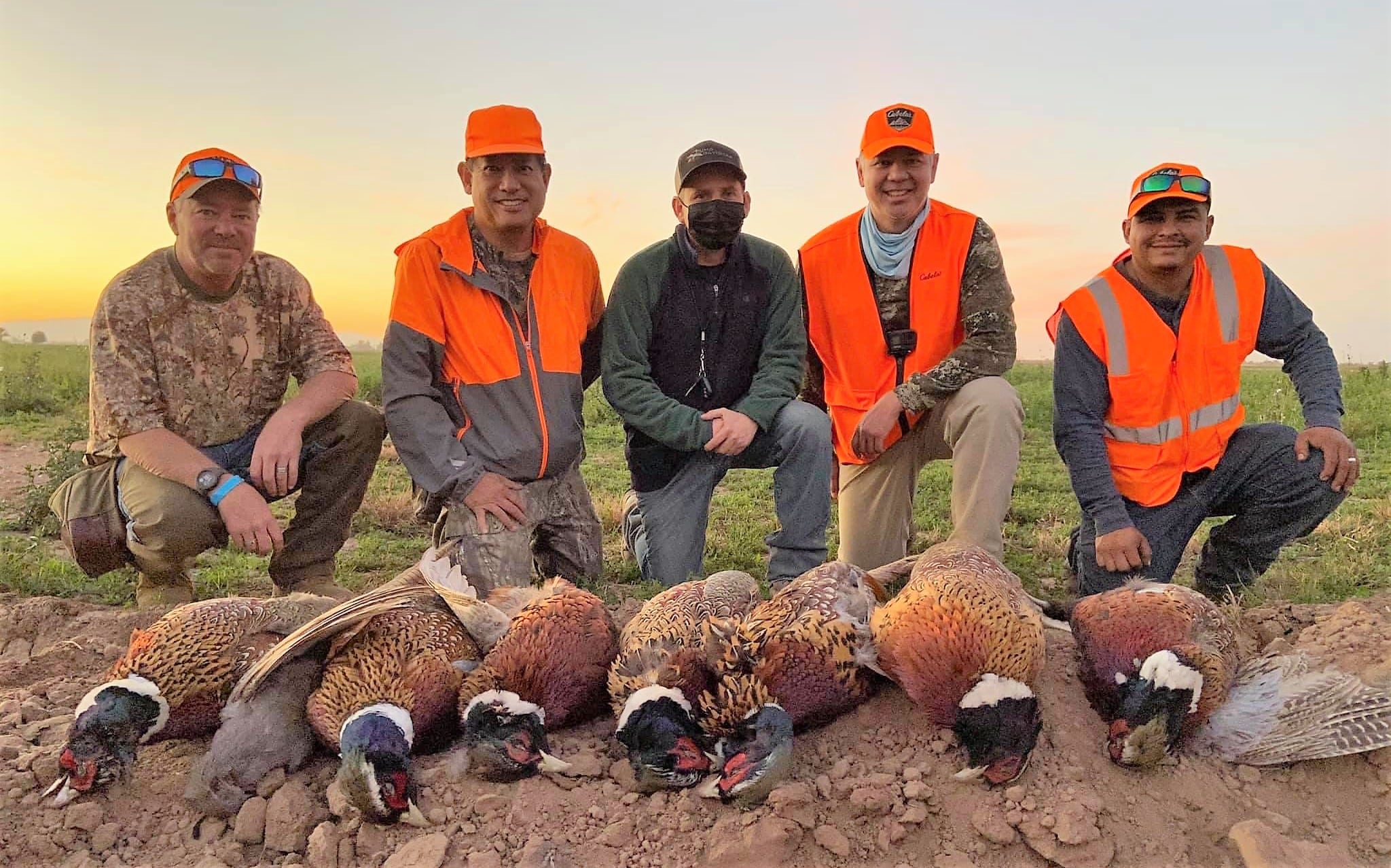 Pheasant hunting?  Is that you Joe?

Different isn’t it?  You may remember back in September of 2019, I spent 3 days fishing in Bahia de Los Angeles (aka Bay of LA).  That trip was one of the highlights of 2019 for me.  It was set up by my friend Orchid Martinez of Baja Fishing Convoys.

While I was still in Seattle in December, Orchid reached out and said she was going to start setting up some hunting trips in Baja in 2021.  She had just completed an exploratory trip to Mexicali with her husband Jon to go pheasant hunting.  That initial trip went well, and she wanted to organize a trip with clients before the season ended.

The pheasant season there just ended this last Sunday, January 10th.  Sunday was also the second of two days I spent hunting pheasant with Orchid and her group on her first trip of 2021.  I’d never actually been hunting before.  I had a BB gun as a kid.  I learned how to handle a handgun from my dad as a teen.  I shot all kinds of weapons when I served in the US Army Reserves.  But I had never hunted.  I wasn’t opposed to it or anything.  It just wasn’t something I did.  That all changed this weekend… 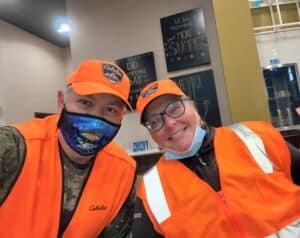 Similar to the Bay of LA trip, Orchid and Jon picked us up in one of their vans at a designated spot close to the border on Friday night.  From there, we made our way to Mexicali, Mexico.  Mexicali is inland from the coast.  It’s on the southern side of the US/Mexico border across from Calexico, California.  It lies north from the northern tip of the Sea of Cortez, but still on the Baja side of Mexico.  That night we checked into a very nice hotel in Downtown Mexicali.  The following morning we were picked up there by our guide Enrique Sanchez of UMA Gaviotas, a licensed, local hunting guide.

We made about a 2-hour drive into the countryside.  We stopped at a meeting place where we connected with Nicho Padilla, a local who had set up our private land access.  Nicho had several associates who would help out in our hunt.

In our pre-hunt briefing, Enrique started out by trying to get a handle on the experience level of our group.  Dave Sachau of Escondido said he had pheasant hunted before in South Dakota and is an avid bird hunter and competition shooter.  Greg Wong of Montebello said he had hunted birds before, just not pheasant.  When it was my turn…

“I haven’t fired a shotgun before.”

“You’ll stay close to me today,” Enrique said.  Dave and Greg chose their weapons from the guns Enrique provided.  Enrique set me up with an over/under-style Browning 12 gauge shotgun and gave me a short tutorial on safety protocols.  He then explained to our group how the day would work.  We would hunt various parcels of farmland.  We would work in 2 groups – walkers and blockers.  The walkers would start on one end of a field and walk the field toward the blockers.  The blockers would stand ready at the opposite end waiting for the birds that the walkers would push our way.  Hens or “gallenas” are off-limits.  Roosters or “gallos” were our target quarry.  Similar to a purse seine, the idea was to surround the birds, push them into a tight area, and then shoot down the roosters when they inevitably tried to fly away. 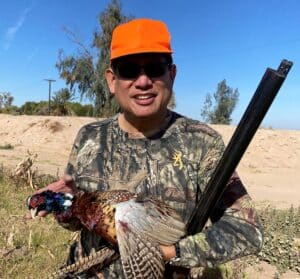 The first location was a dry brush field.  Dave and Greg were in the walker group and I was part of the blockers set up at the opposite end of the field.  The walkers formed a line and advanced towards us.  As they approached my position, a bird popped up.  “Gallo Gallo!” the guides yelled.  Shots rang out and Greg knocked down the first bird of the day.

I got off a shot on Greg’s bird, but I really don’t think I contributed in any way.  A bunch of people I had talked to prior to the trip gave me various tips, many of which were related to how to handle the kick.  I don’t know if they were just messing with me, but I had plenty of time to obsess and be concerned about it on the drive down.  As it turned out…no big deal.

The next location was a field of dried, already harvested corn stalks that hadn’t yet been cut down.  Now I  don’t know anything about these birds or the kind of habitat they like, but just like I can look at a piece of water and know that it’s fishy…I had the same feeling. 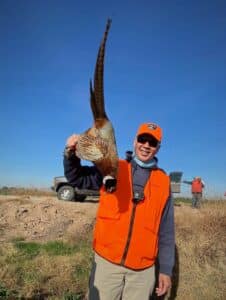 Same deal, the walkers set up on the other end and started making their way through the field.  Shots rang out early and birds went down.  When they got towards the corner where I was stationed, a bird popped up and started flying toward me and to the right.  Boom!  It was down.  Right after it, one went bolting out of the field towards my left.  I turned and fired.  Boom!

OMG, I can’t believe I just did that! 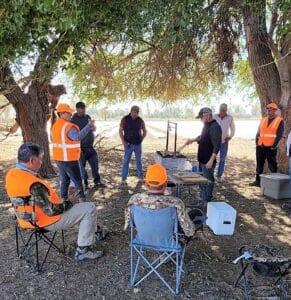 I got them both.  Going in, I was just hoping I wouldn’t skunk.  I somehow managed to buy myself enough credibility to last the whole trip.  Pressure off.  The rest of the morning was slow and we took a break to take lunch.  Nicho led us to a shady grove of trees and the guys proceeded to setup.  Enrique started getting some mesquite charcoal going in a grill that he fashioned himself.  It was worthy of starring at any tailgate or backyard bbq.  We were served an amazing meal of carne asada tacos with fresh guacamole and all the taco fixings.  Cold sodas, water, and cervezas were also provided.  It was memorable.

The post-lunch hunting session was uneventful.  Day One was in the books.

That night we took our birds to a Chinese restaurant near our hotel.  Orchid told me there is a large, long-established Chinese community in Mexicali (who knew).  They prepared our pheasants for us 3 ways…Orange Pheasant, Kung Pao, and Mongolian stir fry.  Delicious.  It tasted like a really lean chicken, with just a hint of wild game taste to it. 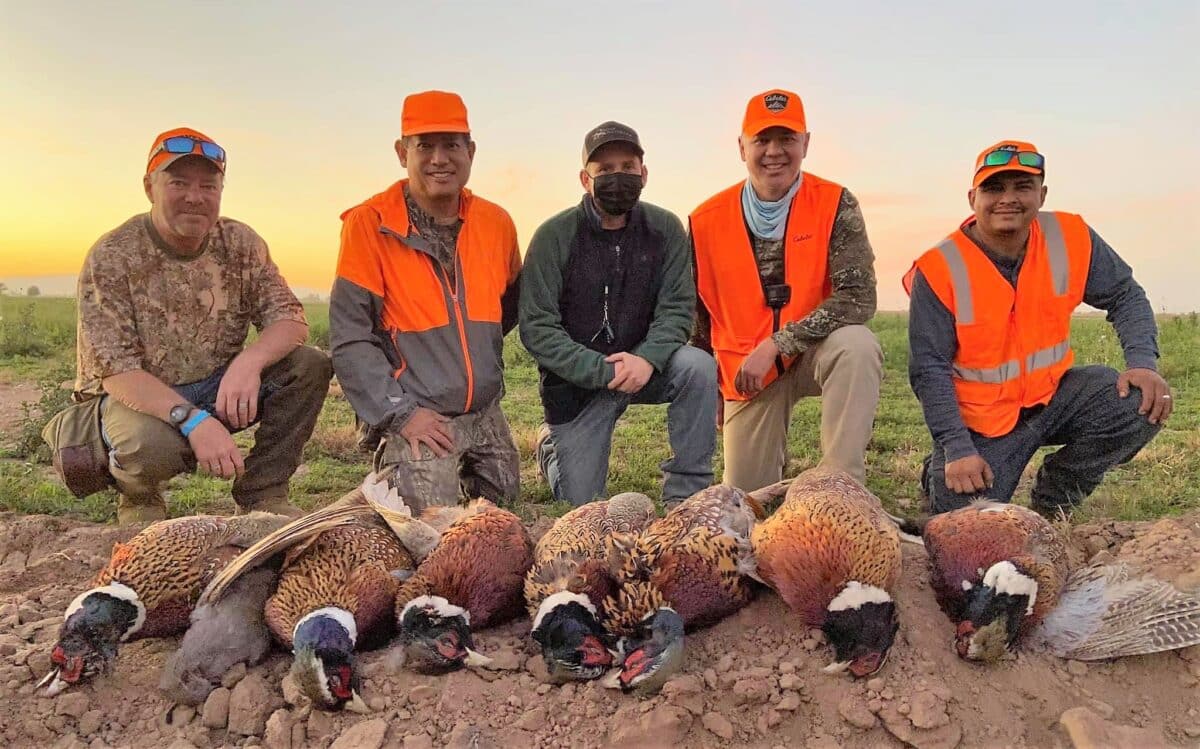 The next morning, the same routine.  Enrique’s partner in the guide service, Jesus “Chuy” Lopez, joined us.  We met up with Nicho again.  There would be a cool wrinkle in today’s hunting.  Same sort of walkers and blockers strategy, but with the added benefit of hunting dogs.  Enrique’s buddy Mike Hernandez was the owner and trainer of the dogs.  They were Braco German Shorthairs…pointer dogs.  The first field of Day 2 was a field of alfalfa.

I had never seen hunting dogs work in real life.  It was cool to see.

The pair of dogs, Argos and Trece (pronounced TREY-say, or 13 in Spanish.  It was the 13th pup in its litter.) systematically worked the field.  They would go out from the line, turn a corner, and run parallel to the walkers.  Then they’d go out a little further, and run parallel in the opposite direction.  The dogs worked opposing patterns in tandem.  Enrique told me they could differentiate between gallos and gallenas.  He said they would stop and point in the event they saw a rooster.  It didn’t happen in that first field, but I got to see it later on. 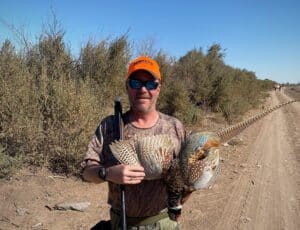 We saw a lot of birds in the morning session, but they were almost all hens.  I took a long shot on a gallo flying away from me but missed it.  Dave shot down the only pheasant of the morning.  We broke for another amazing lunch.

At that stage in the trip, especially after another big lunch, we were all kind of tired.  Estoy cansado.  There was a hammock at the Day 2 lunch spot that looked really inviting for a siesta. Personally, I would’ve been fine if we called it at that point.  Enrique said he had saved a special field though, and we headed to it after lunch.

It didn’t disappoint.  The shooting started early at the far end of the field for the walkers and they had already bagged a few birds by the time they got near me on the blocker side.  As they got within maybe 20 yards, a bird popped up to my left.  Two of the walkers blasted it.  I got a shot in too, but pretty iffy if my shot contributed in any way to the bird’s demise.  They do give half sacks in the NFL though, so I’ll say I got a third of a bird. 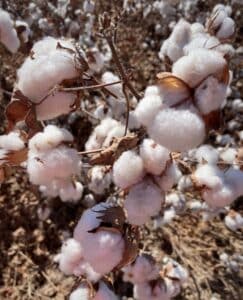 We hit one more field.  It was a cotton field.  The cotton plants were ready to be harvested and were flush with bright, white balls of cotton.  With all that cover, it seemed likely it would yield some birds.  As the walkers approached my position, I had maybe my best opportunity for the entire trip.  I saw a gallo, still on the ground, making its way toward me between the cotton rows.  At that point, I didn’t know it wasn’t ok to shoot one on the ground, and I raised my gun fully intending to take a shot.  It took off and flew straight at me.  I took the shot and somehow managed to miss.  Damn. 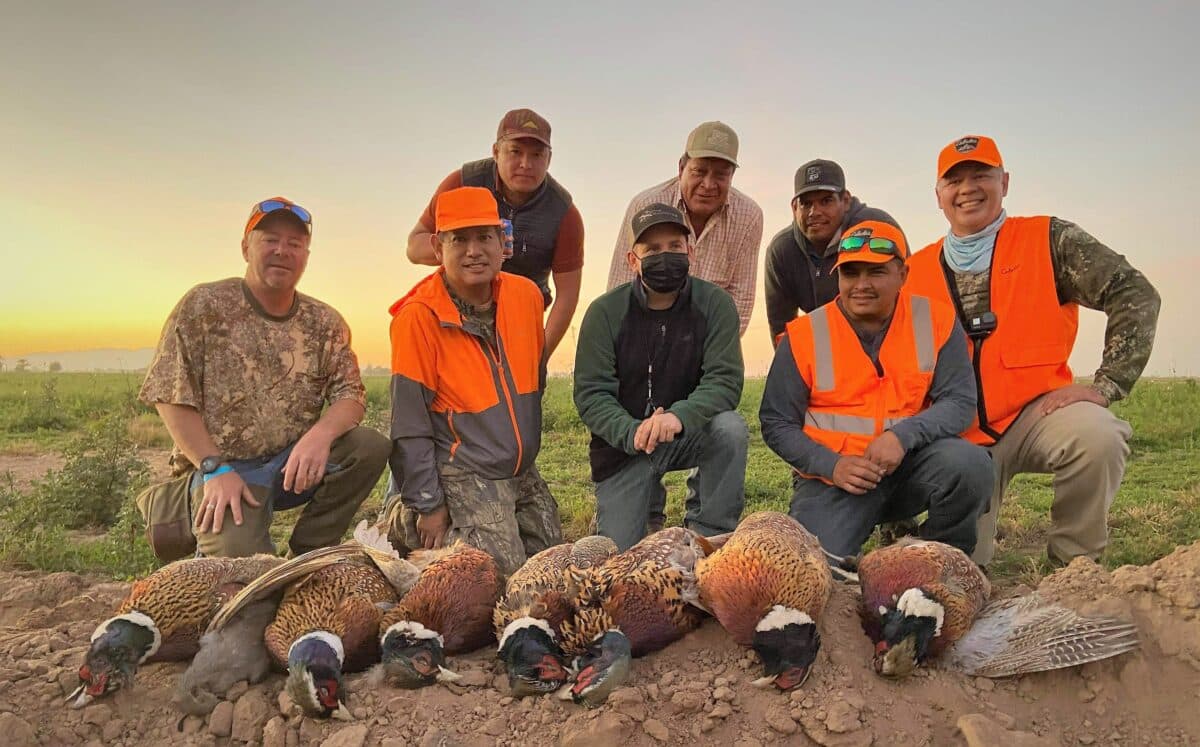 That was pretty much the day.  We took one last group picture and packed up to head home.  I had a blast! (sorry)  It was nice to get out of my comfort zone.  Typically, I’m one of the better sticks on a boat, but I was a total newb in this scenario.  That said, Enrique was a good coach and had me quickly feeling confident I could achieve a positive result.  I notched 2 (and a third) birds.  It felt good to familiarize myself again with firearms and I’d definitely do it again.  With pheasant season done, they’ll now transfer over to dove and quail hunting.  They will do pheasant again in November, so you’re going to want to reach out to Orchid and book that one quickly.  She may also be doing some mule deer trips coming up, so if that suits your fancy, give her a call.  I’ve got my eye on a return to Bay of LA in June.  Highly recommend it if you want to join me.

Thank you Orchid and Jon, Enrique, Chuy, Nicho, and everyone else involved with the hunt.  Good luck if you get out there.