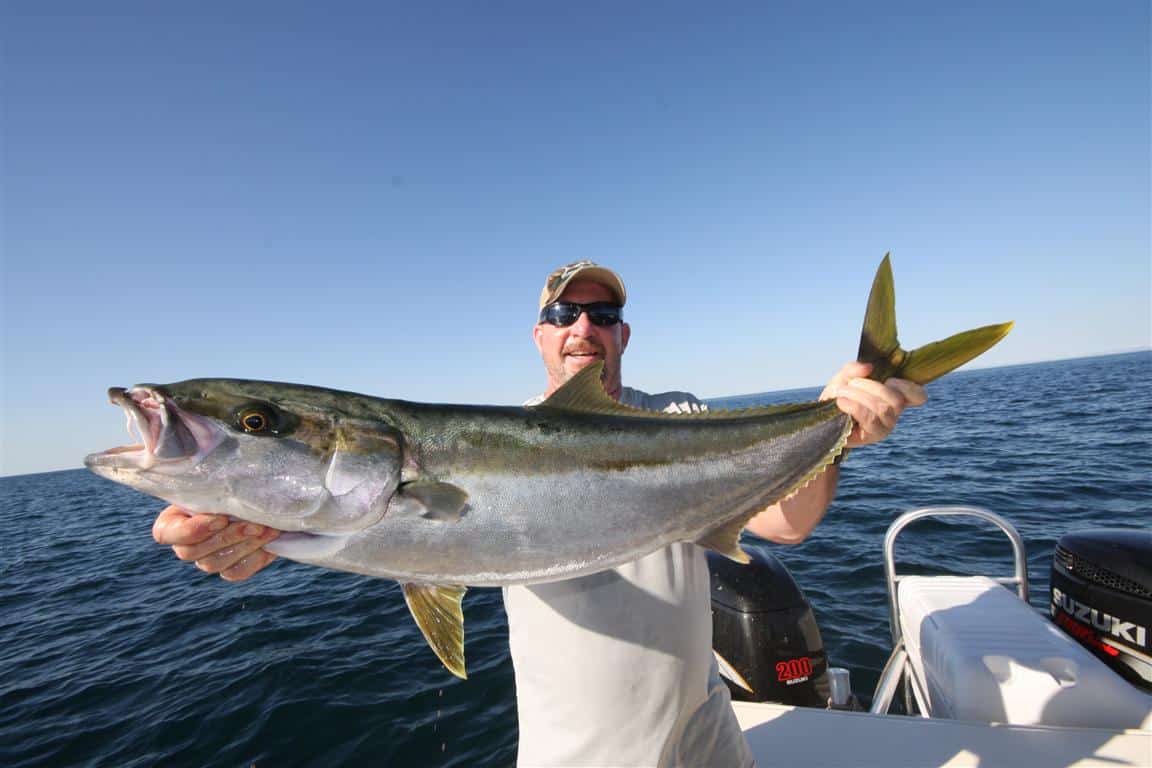 Let’s learn how to fish a kelp paddy in Southern California. Every spring the waters off the coast of Southern California come alive as game fish move in from the south. Yellowtail ride the first wave of this migration into the area in mid-March to early April, moving up the Baja coast while staying tight to the beach. These fish are not normally found offshore. The second wave of yellowtail typically shows up in late April and May. These fish will begin to slip offshore in search of prey in the now warming waters. Later in the summer and fall these same waters will be teaming with even more action, namely tuna, striped marlin and dorado. The appearance of the offshore yellowtail marks the start of the So Cal “paddy hopping” season, when savvy anglers head offshore in search of floating kelp paddies and the game fish that hunt and forage around them. But keep in mind that the top crews don’t just run offshore looking for action, they spend hours doing research and putting a plan together before they ever untie the boat from the dock. Sure you can just run offshore and hope for the best, but you will definitely be more successful if you put a plan in action and follow the tips outlined below.

Kelp paddies consist of free-floating mats of the same kelp that grows along the shoreline. Storms break these pieces of kelp free from the central and northern California coast, and the prevailing currents carry the kelp south into the So Cal bight. These paddies can range in size from a trash can lid to a two-car garage door. And don’t let the size fool you, bigger isn’t always better.

Baitfish use the free-floating kelp paddies as shelter as they meander offshore for weeks or months. As the kelp continues its trip down the coast, it becomes a sort of bait hotel for juvenile fish. And whenever bait congregates like this, the larger game fish that prey upon them are never far behind. Find the paddies, and you should find the fish. However, just finding the fish doesn’t mean you will necessarily catch. If you want to load the fish box, follow the steps outlined below as well as the tips that I’m going to discuss in the second article of this two-part series.

The first step to becoming a successful kelp hunter is being able to locate paddies in ideal water conditions. Rather than just pointing your boat offshore and beginning your search, experienced anglers start by using their computer to plan an upcoming trip. A sea-surface satellite (SST) service such as FishDope (www.fishdope.com) will point you in the right direction long before you head to the marina, thus saving you time and fuel while dramatically increasing your success rate. These services offer vital satellite images that show water temps, current breaks and chlorophyll or “chloro” concentrations. Additionally, FishDope will give you all of the latest catch information and GPS numbers to direct you to the right area.

Once you are ready to head offshore and hunt down a kelp paddy, pull up the current SST chart for your area. Try to identify current breaks that are in water temperatures of 62 degrees or better. These breaks represent the edges where the currents collide. The SST charts identify the currents by coding them with different colors to help you read them. The ideal break will show a hard edge, usually seen as a red body of water pushed up against some orange or yellow water.

After you locate the temperature breaks that you want to fish, pull up a chlorophyll chart from the same provider. Take a look at the same areas you identified on the SST chart and verify that the water isn’t off-color or showing symptoms of a plankton bloom. The color on the chlorophyll chart will help you determine this. You want to target kelp paddies in clean water, which will be shown on the chart as blue or light blue. You want to avoid the darker orange or red water (typically found inshore). These areas will be full of green and off-color water that is typically devoid of life. The idea is to find kelp floating in clean blue or blue-green water.

Once you find the current breaks in clean water that you want to target, it’s time to head offshore. Don’t forget to print out the SST maps and bring them with you when you leave the dock. As you get near the target area, keep a close eye on your water-temperature gauge and look for the change in temperature you are expecting to see based on the SST maps. These temp breaks may move a few miles overnight so try to intersect them at near right angles. You may come upon the temperature change a few miles sooner or later than you expect depending on how fast the current is moving. Stay alert and don’t slip by it.

When you encounter the temperature break, change course and zigzag back and forth across the edge while keeping a sharp eye out for kelp, birds or breaking fish. Continue working in this direction for several miles before giving up hope. You’ll notice that where you find one kelp paddy, you’ll usually find others.

Often times, however, you will come across current breaks without temperature changes. In calm conditions, the current breaks will look like slick rivers of water on the surface of the ocean. If it’s rough out, they will be nearly impossible to see. When you come across these current breaks, use the same technique above to work your way down the break while looking for kelp and other signs of life.

While the techniques already mentioned will definitely get you in the game, there are a few more tricks you can employ to further stack the deck in your favor. The first thing to consider is better visibility. This can be accomplished in a few ways, but the simplest way to see more water is to raise your vantage point. If you fish on a boat with a fly bridge, this really should not be an issue. Guys on smaller boats, however, need to get as high off the water as possible, but don’t be stupid and make sure to stay safe. Consider adding a spotting tower to your current hard top. When you enter the zone or area where you plan to fish, get a buddy up on the roof and put him to work. Your effective range of vision from just seven or eight feet off the deck will be a massive improvement.

Another great tool for finding kelp paddies is a good pair of binoculars. Every serious offshore boat should invest in at least one decent pair of binos. Depending on your budget, these can range from $100 to $5,000 for a pair of gyro-stabilized binoculars. If you really want to get serious, gyros will give you a leg up on the rest of the fleet. There is a reason all of the top marlin fishing teams have several pairs of gyros on board.

You can spend all day glassing the surface for kelp paddies in a pair of gyros, using 14X power magnification from a moving boat. They aren’t for everyone, but they truly are amazing. There are also a couple of lower-cost electronically stabilized binos available for around $1,200, and these offer a big advantage over conventional binos as well. When you combine a high vantage point and a pair of quality binoculars it’s not uncommon to spot a kelp paddy from a distance of several miles! These three steps will get you moving in the right direction when it comes time to head out in search of some kelp paddies.

Follow these suggestions and you will see a marked improvement in your hunting (and catching) almost overnight. But, there is still more to learn to effectively fish the paddies. Stay tuned for part two of this article to learn more about how to properly fish these offshore fish hotels and maximize your catch.