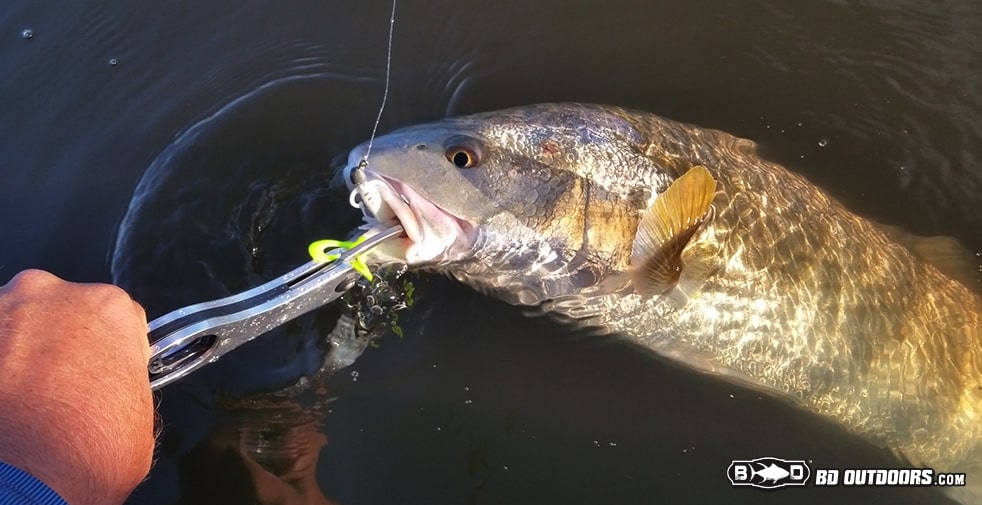 While I never mind releasing redfish to catch again one day, I equally enjoy keeping a nice slot size red for dinner.  Here is a quick How To on the method I use to fillet a redfish and most other saltwater inshore fish. One of the key elements of fish cleaning is to use a sharp knife.  This new fillet knife from Penn has just the right flex and a comfortable grip on the handle.  Here is how I keep them sharp between fish cutting sessions. I first make a cut behind the gill flap and aft of the pectoral (side) fin.  Angle your knife up and under the scales so you are not trying to cut through them.  Cut downward until you hit the spine. Using the tip of the knife only, I cut towards the tail along and just above the dorsal fins.  I’m only cutting the skin and an inch or so of flesh. Now I use the tip of the knife again to cut the meat away from the bones.  Let the bones be your guide and just cut a little at a time.  Lift the meat upward to expose the uncut connection. When you hit the spine in the center, cut up and over it but be sure an go back down so that you don’t leave a layer of meat in the “shadow” of the spine. On larger fish, I cut up and over the main rib bones.  There are some small bones you will cut through over the ribs, but these will be removed in later steps. Follow the ribs down to the belly and cut the skin to remove the entire fillet from the body. Now you can do the same process to the opposite side. Now I skin the fish by holding the tail-end of the fillet and starting my cut forward holding the knife at a shallow angle. It is hard to describe the “shallow angle” but it is probably around 30-degrees to the skin.  I make small back and forth cuts while holding the skin and cutting away from my hand.  On larger fish, I find it much easier to only skin half of the fillet at a time by cutting down in the middle and working away from your holding hand. One tricky but important aspect to skinning saltwater fish is to let your knife ride just above the skin, leaving a super thin layer of meat on the skin.  I do this because the flesh that is tight to the skin is full of red, fatty muscle that is often fishy in flavor and undesirable.  Here I have cut down hard against the skin to show the red meat.  So the trick is to leave a little on the skin without leaving too much good meat.  I would guess about an 1/8-inch left on the skin is about right. (practice) So down the centerline of the fillet is still some red meat and contained in that are some dorsal rib bones above the rib area.  By cutting out the center you remove the red meat and bones together.  You can go ahead and split the fillet into two pieces. Redfish and most other drum and porgie species have one spot where it is easy to leave a few bones.  Just above the centerline you are trimming and  on the “head end” of the fillet you need to cut upward towards the back to eliminate these higher bones.  Check with your finger to make sure you got them. Finally I trim the small amounts of red meat off of the edges of the fillets.  Here the two fillets end up in four totally boneless and red meat-free pieces.  Rinse and enjoy.