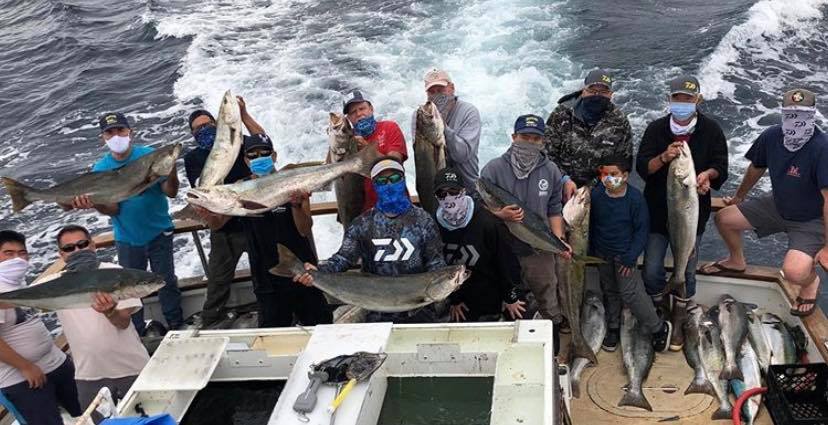 Looks like I’ll start making my way back down this week.  It couldn’t have happened at a better time.  There are so many different fishing opportunities going on.  I’m focused on getting back in time to get in on what seems like a strong white seabass bite going on around SoCal.  The picture above is from last Saturday (June 27th) aboard Fortune Sportfishing.  Owner/operator Bruce Smith led a ridiculously successful overnight island trip that saw 17 anglers score LIMITS of white seabass (it’s 3 fish now folks!), 29 yellowtail and a kicker halibut.  Bruce told me it was one-stop shopping at the beginning of the rising tide.  He said me there were a handful of dropper loop fish, but the hot ticket was a double squid on a big hook, using a sliding sinker set up with a 3/4-ounce slider and 40# fluoro.

Up the coast in the Channel Islands, also on an overnight trip returning Saturday night, Capt. Sonny Haendeges had a big score on the Pacific Islander.  They posted a count of 45 seabass, 16 yellowtail and a halibut for 25 lucky anglers.  I’m told they’re biting on fin bait up north, so make sure you have the appropriate hooks if you head up to the 805.

This weekend features a full moon phase, so that golden seabass window is in play.  I would have already been excited about the opportunity given that it’s starting to get late in the seabass season.  With the limit up to 3 now though…as one of those sports betting tipsters would say,

Bruce is chartered out on Sunday night, fishing Monday.  But Capt. Bob Vierregger, formerly of the Fortune and who got me my PB 62 on the Full Moon Fever trip, is now on the Freedom.  I’m riding Sunday night.  Roll out if you want to get in on the action.

Another SoCal summer fishing opportunity I’m looking forward to is getting some time on the sand.  I’ve been talking with my Surf Sensei, Randy Toji, pretty often during my stay up here in the Northwest.

I shared with Randy that I finally got around to surf fishing last week.

The water is really cold up here!

I managed to pick up a pair of used waders up here.  I used them when I fished the Sol Duc River, out on the Olympic Peninsula and caught my big salmon.  I busted them out again this week when I went out to the coast to fish off the sand.  I did pretty well, managing to score 7 perch.  It’s a different deal up here.  Rather than a Carolina rig with a half-ounce slider and 4# test, I fished a high/low setup using 12# and 2 ounces of lead. 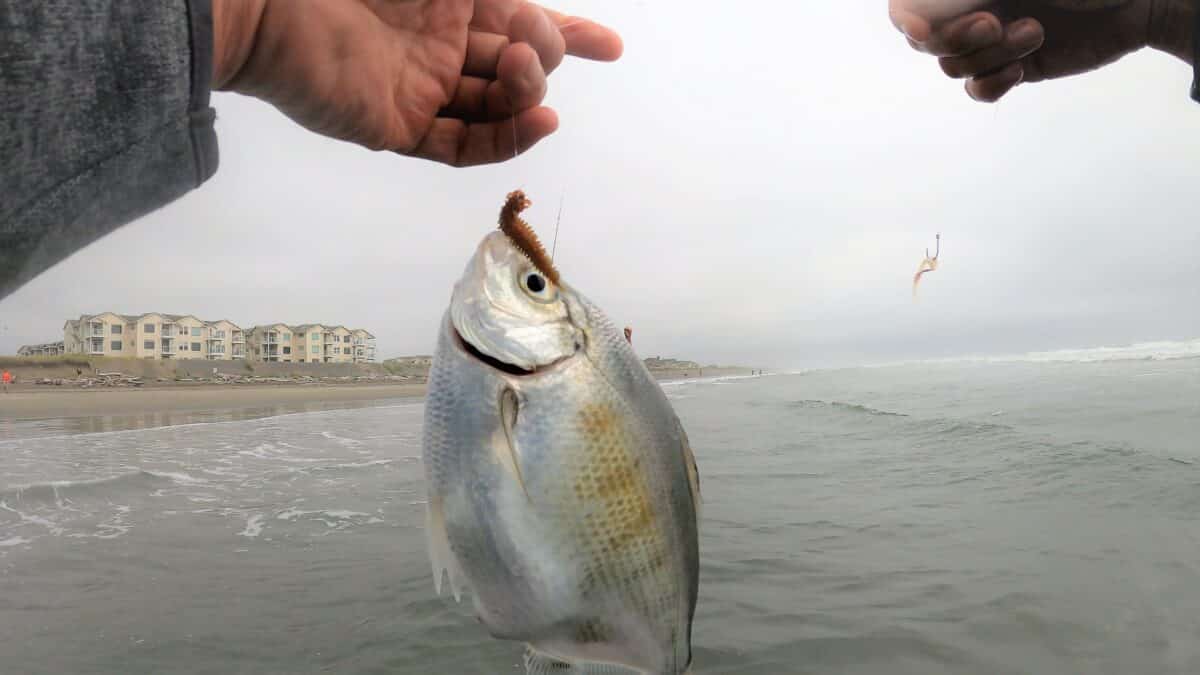 I went to the beach at low tide.  I was hoping to find some clams to use for bait, but as you can see I caught my fish using the Berkeley Gulp! camo worms.  I managed to catch some dink redtail perch.  I’ve been wanting to catch some of those, but this pregnant walleye perch was the highlight of my session.  She was released safely. 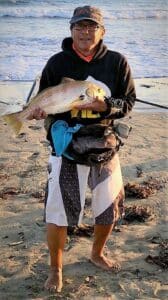 I thought I did pretty well for a first time outing.  Of course though, Randy being the sensei, he’s had me longing for home sand with his reports last week.  He fished in North Orange County and South Bay LA area.

Randy rode a hot streak where he caught 20-inch plus beans (corbina) 3 days in a row!

Then if that wasn’t enough, he added this beautiful 22-inch spotfin croaker (left) to his tally.  Randy said the sand crabs are abundant, so my favorite brand of surf fishing is in full effect back home.  I can’t wait to share the sand with him upon my return.

Offshore is still looking good.  Point Loma bass are hot.  The San Diego full-day boats are catching fish at the Coronados.  Like I said at the start, a myriad of fishing opportunities are in play right now.  Book early and good luck if you get out there.