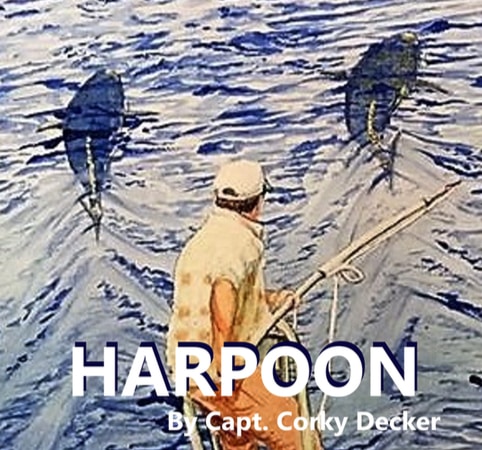 Capt. Corky Decker has spent his lifetime chasing fish all around the world and in all capacities.  Now he has written an awesome book Bluefin Harpoon Fishery about how he has returned to the North East bluefin harpoon fishery that gave him his introduction to the watery world of fishing.

Harpoon is A great gift to any fishermen, who loves fishing history, adventure and the quest for big fish.

Throwing a pole at a fish, ‘a harpoon’, in today’s high tech world of bots and micro chips, sounds kinda, past tense, and well, very old. It is one of the oldest and most primitive methods ever applied to the harvesting of fish, but it has survived and a handful of fishermen in New England still call themselves harpooners. The bluefin tuna, the most prized, expensive fish swimming in our oceans, are still harvested with hand thrown harpoons. Corky takes us back though the history of this unique fishery to the very first one known to be harpooned in modern times; to what the fishery has become today.

Fish stories, oh yeah, plenty of those, but the descriptions of how these fish are pursued, and the passion of the men who chase them is unprecedented. The bluefin tuna is warm blooded, extremely smart, long living and a highly migratory species. They adapt to their changing environment, altering their patterns and behavior adapting to fishing pressure, they avoid dangerous areas, the boats and men that mean them harm.

Harpoon is vivid history of a fishery few people even know exists, taking the reader out on the pulpit, looking into the blue-green waters of the North Atlantic ocean searching for the black backs of the bluefin. The men of old, the great harpooners of yesterday, and the fishermen of today who try to follow in those footsteps, Harpoon tells the tale of these few, the ‘Iron-men’ the ‘Stick boats’, the harpooners. Harpoon is a captivating true story with a collection of photographs that paint the picture of a time never forgotten, and lived on by a handful of guys who still ‘aim the dart’. You open these pages, you had better start reading early because you are going be drawn in… 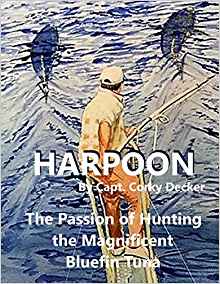 You can purchase Harpoon on Amazon or ask your local bookstore to order it.  Other options will become available in the near future.