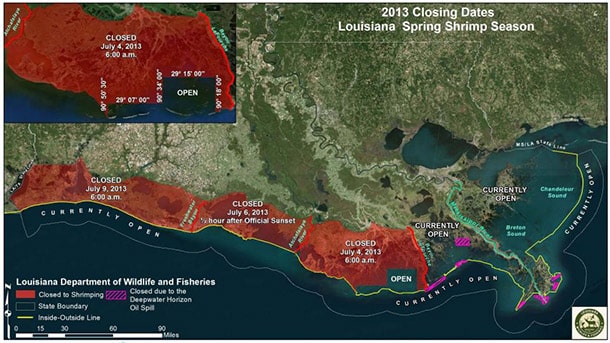 A paper published in the journal Proceedings of the National Academy of Sciences co-authored by several NOAA Fisheries scientists and the Food and Drug Administration, says that the public can be confident about the seafood they eat, solely based on the integrity of the scientific process.

In April 2010, nearly two years ago, the United States experienced the largest oil spill in history as a result of the explosion of the Deepwater Horizon oil well. Ultimately 4.9 million barrels of oil spilled into the Gulf of Mexico. As reports of the accident reached shore, a sophisticated federal and state effort was underway to keep any tainted seafood from reaching the market and on to our dinner plates.

State and federal fisheries biologists on area ships, trained sensory experts, chemists, risk assessors, toxicologists, laboratories and experts around the country worked hundreds of thousands of hours to protect seafood consumers. Though fisheries were closed in some areas for more than a year, no contaminated product ever reached the market, NOAA reports.

Is oil harmful to humans?

Crude oil, the type released during Deepwater Horizon, is made up of a complex mixture of hundreds of chemical compounds. Among these, the polycyclic aromatic hydrocarbons, also known as PAHs, are recognized internationally as the oil components of greatest health concern. Many PAHs are known to be toxic to humans, and some can cause cancer. PAHs can also persist in the environment for long periods of time, increasing the possibility that people will be exposed. Due to this, scientists selected 13 PAHs as chemical indicators of human health risk.

How much exposure to oil is acceptable for human seafood consumption?

One of the more challenging aspects of this work was to set levels of concern for PAHs that present negligible risk to seafood consumers. Federal and state risk managers set out to be overly protective and conservative in establishing acceptable thresholds. They used standard FDA and Environmental Protection Agency human health risk assessment methods to set the levels, incorporating the best peer-reviewed science available. Considerations included how much seafood people eat, the average body weight over a person’s lifetime, and the higher risks of some populations such as children, and the elderly to the oil toxins.

When were areas in the Gulf of Mexico closed to fishing?

Broad swaths of the Gulf of Mexico were closed to fishing immediately when floating oil was detected or was projected to be in the area. The decision to close an area was straightforward and based on whether oil was present or might soon be in the area. Opening an area to harvesting seafood required sophisticated sensory and chemical analysis to ensure the seafood was safe.

How do fish and other marine species process oil?

One of the lessons learned from the Exxon Valdez oil spill and other spills since then, is that fish such as tuna, grouper, and snapper, have a well-developed capacity to chemically alter oil so that their systems can quickly eliminate it. Thanks to this capability, there is low potential for PAHs to accumulate in edible tissues and thus to transfer up the food chain to humans. Other marine species such as oysters and clams have a lower capacity to process PAHs, while crustaceans, including shrimp and crabs, have a capability that lies somewhere in the middle.

What was the process for reopening an area to fishing?

Many areas were closed to fishing until managers saw visible floating oil had disappeared and when there was minimal risk for oil to re-enter the area. Once visible oil was gone for at least two weeks, scientists began collecting seafood samples to determine whether the area could be opened. To allow fishing to resume in an area, a testing approach was used, including sensory methods—smell and taste—and a sensitive chemical analysis. For an area to be reopened, seafood samples had to meet strict criteria. First, they had to pass the sensory test—minimum of 5 of 7 expert assessors finding no detectable petroleum and dispersant odor or flavor. Even if one sample failed, the entire area would remained closed to fishing. Second, if samples from a closed area passed the sensory test and the chemical analysis, an area could be re-opened. Meanwhile, scientists continued to collect samples in opened areas to ensure that the seafood remained safe.

What were the overall results of the seafood testing?

A very low percentage — 0.16 percent — of samples failed the sensory testing. This was expected as the sampling occurred after the oil had dispersed and we know that fish quickly process and eliminate oil from edible tissues. For the chemical tests, all results were below our ability to measure, or when detected, were magnitudes below —at least 1/100—the established level of concern.

How extensive was the sampling effort?

At its furthest extent, about 37 percent of federal waters in the Gulf Exclusive Economic Zone were closed to fishing, stretching in a wide arc of 88,522 square miles from the northeastern coast of Texas to the Florida Keys—an area roughly the size of Utah. From April 2010 to June 2011, more than 8,000 seafood specimens, representing tens of thousands of individual animals, were collected and tested. The samples included commercially and recreationally important species such as shrimp, oysters, crabs, snapper, grouper, tuna, wahoo, jack, and swordfish. Scientists sampled areas that had heavy cumulative oil more intensely than those with minimum or moderate oil.

How do we know that seafood isn’t contaminated by chemical dispersants?

Public concern about the use of oil and chemical dispersants led to a collaborative effort between FDA and NOAA to quickly develop and approve a method to measure dispersants in many different types of seafood. Once the method and risk level were in place, scientists tested the samples, including 50 percent of those collected before the test was approved, were tested and all samples passed.

What was and is the public perception of the safety of seafood from the Gulf?

Multiple scientific reports have established that even high levels of PAHs are unlikely to be found in edible tissues of vertebrate fish, but scientists felt it necessary to continue to assure the public of seafood safety with this new data . The extensive, real-time sampling effort and strict protocols were designed to help ensure that Gulf seafood was truly safe to eat, despite public perception.

Consumers no longer need to question the quality of our seafood, and their confidence in seafood testing protocols will help revive the Gulf economy as well as our nation’s seafood industry.

For more information please visit the article at the PNAS website.

Gulf Seafood is Safe To Eat