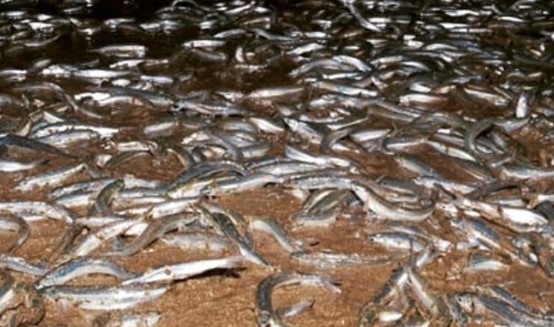 The first time I heard about the grunion run, I was a freshman in college.  Some upperclassmen mentioned it to a group of us, and I thought they were yanking my chain.  That was before the internet and I couldn’t look it up to verify the veracity of the grunion run.  I never went.

I forgot about it and returned home to Seattle after my freshman year.  I didn’t give it another thought until well after I returned to SoCal and it was an activity I could take the kids to see.

At that time, our interest was in the grunion themselves, but I remembered looking away from the beach, out in the water, and seeing the grunion getting pushed up and out of the water.

Something was chasing them

If you have never seen the grunion run, Cabrillo Aquarium does an excellent Meet The Grunion presentation.  I highly recommend going early.  Get a ride and get dropped off.  It’s a good way to go.  Take the kids and have fun. 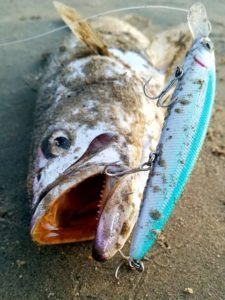 If you are reading this column though, you’re probably thinking about what kind of fishing opportunity the grunion run might create.  The first grunion run of the season just happened this month.  Joel Myhal shared some pics to a Facebook surf fishing group I participate in.  He fished the morning after the first run and had a nice day scoring 2 orangemouth corvina (right) and a short seabass!

Just like a squid spawn attracting seabass and other gamefish, the grunion run is a bait aggregation event that attracts gamefish to the near shore environment.  It’s a tremendous opportunity for shore based anglers.  If you aren’t familiar, grunion runs start in the Spring (now) and extend into the Summer (August is the tail end of it.  July is really the last regular month though.).  The California Dept. of Fish and Wildlife has a pretty comprehensive guide that details when and where, and a lot of information about the fish.

Grunion Run – Fishing Game Plan
In terms of fishing tools, any presentations that match the hatch can be effective for fishing the grunion run.  The dropshot method that I like to use is one using the appropriate plastic.  There’s an AA grub that has a light blue back and a clear/silver flake bottom that I plan to use for this next run.  Swimbaits that mimic that blue-ish green and silver grunion color.  Hardbaits like the Lucky Craft that Joel used above obviously work too.
If you’ve never fished the run or are unfamiliar with surf fishing in general, there is a great opportunity this weekend and next week to quickly get up to speed. 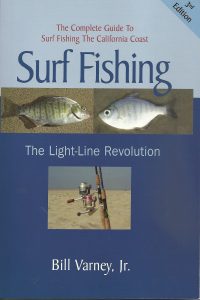 For this weekend, Go the Fred Hall Delmar show and find Bill Varney.  Then on Thursday of next week, my personal surf fishing gurus are doing their annual seminar at Sav-On Tackle.  Robert Danelen, Randy Toji, and Ruber Ortiz will be doing that seminar on Thursday night from 6-8pm.  They’re following up the “classroom” environment of the seminar and taking their act to Bolsa Chica that following Saturday (March 31st).  That’s a grunion area.  You can go on Saturday, get the lay of the land, and then come back later that night.  Sunday morning even presents a good opportunity as there will probably still be fish lingering in the area.  Who knows, these fish school up just off the beach in preparation for the run, so Saturday day could be really good too.

If you are really jonesing to get out on a boat.  Maybe just take in a local halfie tomorrow morning?  It doesn’t look too promising going any bigger than that as the weather is supposed to start kicking up again later in the day Saturday and extend into Sunday.
Good luck if you get out there.