Every day before the sun peeks over the downtown San Diego skyline, Justin Henry boards a small crew boat and motors across the bay to start his shift on the famous San Diego Bay bait barge. 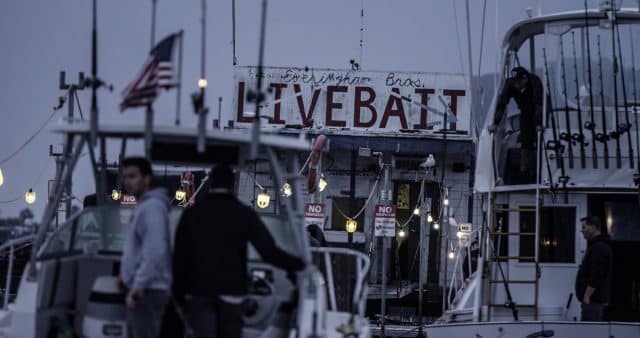 An iconic flotilla of docks that never sleep, the Everingham Brothers bait barge has been the lifeline of San Diego’s iconic sport fishing fleet for over fifty years.

It’s a day in, day out hustle of slinging scoops, collecting cash and fighting sea dogs, but to the fishermen of San Diego, it may be the most important job of all. 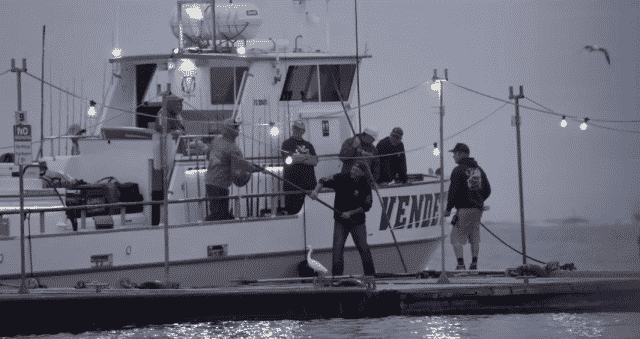 Southern California is privy to some incredible fishing; the last few years especially.  One of the key factors in this fishery is the ability to have great livebait at a moments notice.

Other places in the world may have amazing fishing, but getting bait can be a stumbling block to an epic day.

Not in SoCal, the bait barge is the first stop on everyone’s list once the dock lines are cast.  It’s people like Justin Henry who work on the barge and keep the system moving that are a key part to a great day.

Justin said, “There are always some guys that strictly fish jigs, poppers, irons, but I’d say 95% of the industry depends on live bait.  If you pin on a cured bait compared to a fresh bait, your cured bait is going to swim away from the boat a lot faster and be more effective.  We’re very fortunate to have live bait available to us, basically year-round.”

By curing, Justin is referring to the process of keeping the bait in submerged pens in the bay where they recuperate from the stresses and damage of being netted in a purse seine offshore and transported to the bait operation. Justin describes the process, “When they drop it off it’s not always in the best shape.  It takes 5-6 days to get all the slime and scales back and basically nurse it back to full health.  Primarily sardine is the bait of choice on the West coast.”

Sardines, anchovy and mackerel are all bait options for SoCal anglers.  Sometimes live squid are on the menu too.

“The amount of bait we go through is pretty impressive.  We definitely couldn’t do it without the big seiners we have”, said Justin. “Each bait box has two lids.  Under those lids are 8x8x8 pens that hold the bait.”

The bait barge is so vital to the steady stream of fishermen that they almost never shut down operations.  No matter the weather or the time of day, bait crews have to endure the elements in order to serve their customers. Justin commented, “We don’t close down.  24/7, 365, we are working outside.  We do close on Christmas. Fishermen don’t sleep and different boats come at all different times.  We have to be ready; We are fishing.”

SoCal anglers should count themselves lucky to have such a constant source of great bait and the dedicated crews who deliver it.  “Without us there would be a lot less fishermen”, Justin surmised.  I think he’s probably right.

Visit Gunden’s website to check out the gear that makes fishing possible.

The Grundens Deck Boss Boots that Justin wears in the video are engineered to be tough and durable to stand up to the rigors of the job. Available for $129 at Grundens.com.

The Herkules bibs worn by the seiners in the video are regarded the world over as the critical tool for the job when working on a commercial fishing boat. Find them at Grundens.com for $149.

The Grundens trucker hat worn by Justin and fishermen the world over is also available at Grundens.com for $24.99.