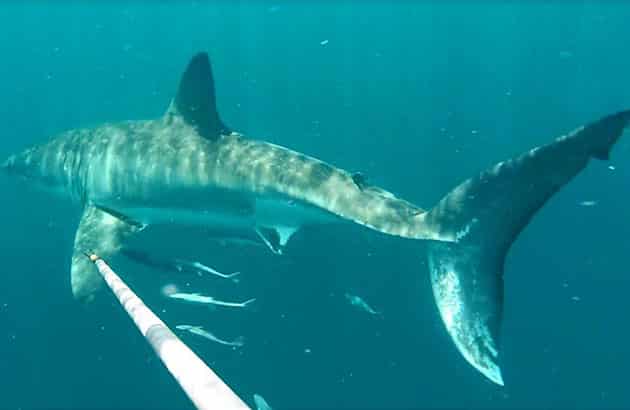 It sure seems like more and more shark encounters are happening as of late. Do we chalk it up to more sharks or the fact that so many people now have video cameras rolling, even underwater? Either way, Zack Spurlock won’t forget his recent encounter while diving for lionfish on the 90-foot reefs off Port Canaveral, Florida.

Zack is a long-time agent with Remax Elite Realty, but on this day he was helping his good friend and dive buddy, Capt. Joe Penovich who owns Grills Seafood Deck and Tiki Bar in Port Canaveral and Melbourne. Zack is no stranger to spearfishing and has spent many hours in the underwater world. Zack said, “Joe has been serving lionfish in the restaurant and it has become wildly popular because it is delicious and helps eliminate these invasive fish from Florida’s reefs. He had an upcoming interview for the restaurant and needed some more lionfish to work with. The weather was borderline at best, but was forecast to get worse, so Joe said, lets give it a try. I put on my game face and said okay, but when I saw the ocean churning on my drive in, I admit I was having second thoughts and almost turned around.”

Zack continued, “The ride turned out to be okay, and once I was underwater, I was so glad we went for it. The water was unusually clear for this area and I bet I could see forty-feet. The first dive was lean on lionfish, and a sandbar shark kept coming in pretty aggressively. I had to fend him off a few times and decided we needed to move down the reef. The second dive was much better on the lionfish, but it was during the third dive late in the day while I was busy with a bunch of lions, that I looked offshore of the reef and saw a big shark. I did not know for sure which kind, but I knew it was big. I left my bag of lionfish and swam towards it to get a better ID, but the shark casually kept me at a distance. It swam off and I went back to work. I was certainly looking over my shoulder a lot and here came the shark on my other side in the opposite direction. I thought to myself, that means he is circling me. After the third pass and conformation it was a great white, I decided to get the Gopro camera from the boat. I popped up and asked for the camera and they thought I was joking. With Gopro in hand, I was on the surface swimming back to the jug when I heard Joe’s daughter Ali Penovich screaming something.

I raised my head above the rough waters and made out the words, “He is right behind you!”

Just then my heart leaped and I spun around. I was only ten feet from the head-on shark. He was still casual in his motions and turned off about five feet away from me. I was filming, but realized I better ready my pole spear, so there is one moment in the video where I miss his closest approach. The shark faded off and I handed my prickly bag of lionfish to Joe and tried to swim back down to film more of the shark. At about fifty feet down, I said to myself, what the heck are you doing, and I swam back to the boat and climbed out. I have to give thanks to Joe and Ali who kept watch and kept the boat near me despite the rough seas. It was something I’ll never forget.” Thanks to Zack for sharing his story and for helping curb the destructive lionfish populations. Thanks to Capt. Joe for cooking as many as he can. If you find yourself in Central Florida, get to Grills Seafood and eat a lionfish and help save the reefs. If you decide it is so good you need to move here, then give Zack a shout at Remax Elite and he will find you the perfect house.