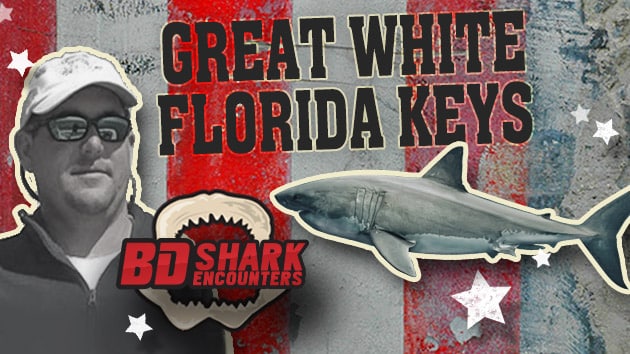 One July, Capt. Ryan Logan of Cheerio Charters in Key West Florida was yellowtail snapper fishing with a father and son charter. They were finishing up catching their yellowtails on a reef in fifty feet of water when a buddy in a near-by boat called. His buddy told them they had a great white shark circling their boat. Capt. Ryan thought they were kidding until he looked over and could see a large dorsal fin behind their boat. They pulled the anchor and drove over to check it out. Upon their arrival, the great white swam over to check them out and casually cruised around for about ten to fifteen minutes. Capt. Ryan said,

“ I’ve seen plenty of big mako and tiger sharks, but this was the first great white I’ve seen in eighteen years of fishing here. It was close enough to touch.” Though the “old-timers” say the great whites have always frequented Florida waters, it seems to me that there has been an increase in the sightings of these majestic sharks. I’m still waiting for my turn to see one, but I know of at least a dozen or more people who have had this type of close encounter in the last couple years.