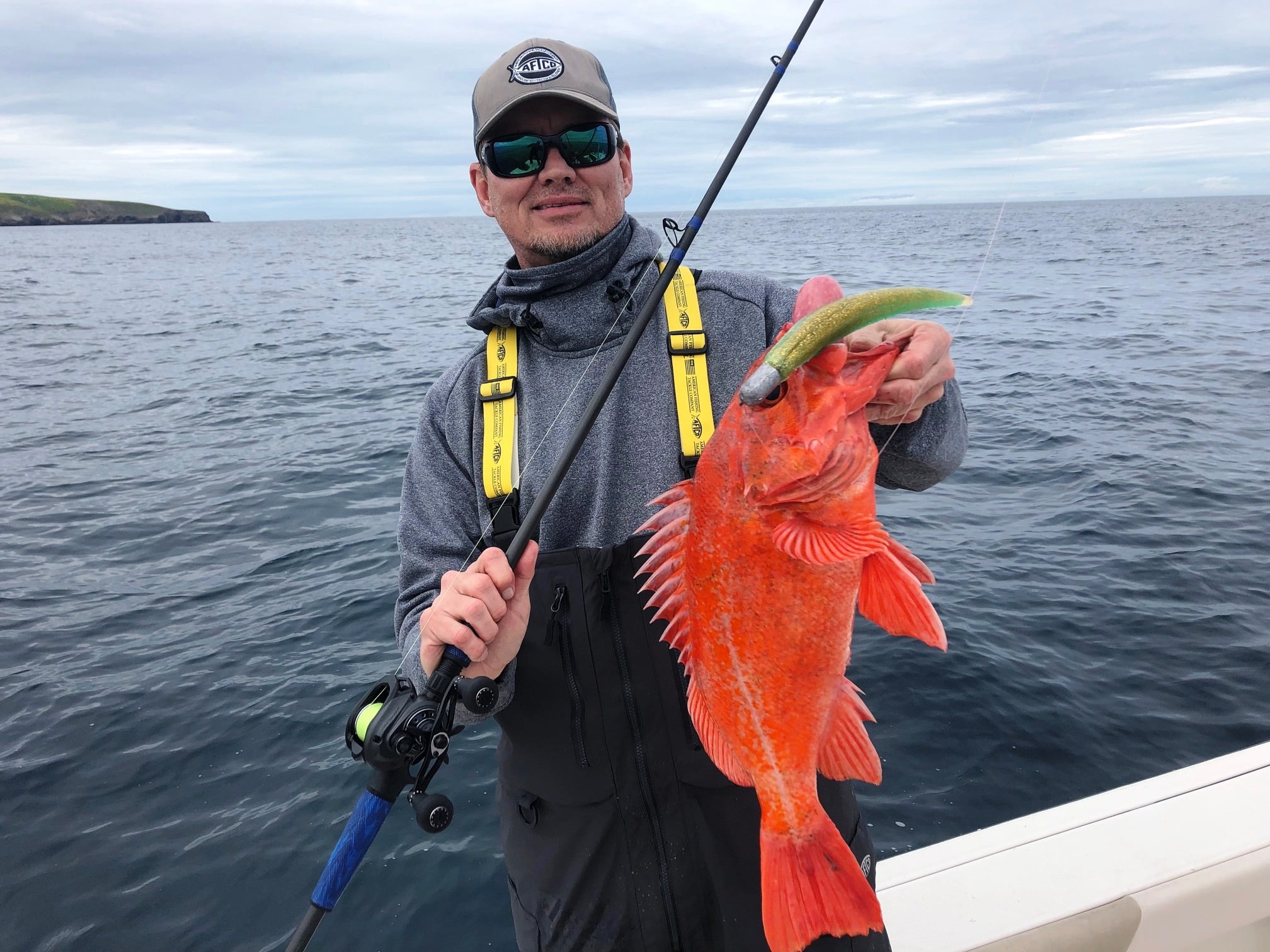 With new waters opened for the first time in over 15 years, there were some pretty high expectations riding on this year’s rockfish opener and the fishery didn’t disappoint. If you haven’t been following the rockfish regulation changes, starting on March 1st, anglers were allowed to fish in waters of up to 40 fathoms (240 feet) inside the boundaries of the CCA (Cowcod Conservation Area) and 75 fathoms (450 feet) outside. As has previously been the case, the DFW continued their effort to make the regulations as confusing as possible by making anglers stay within fathom lines related to way points rather than just fishing within a particular depth limit.

Put simply, the DFW has chosen way points at the maximum fishable depth along the coast, around islands and over certain banks, and then connected those dots with straight lines. If you’re inside the straight line you’re legal and if you’re outside it, your illegal (even if fishing within a legal depth). 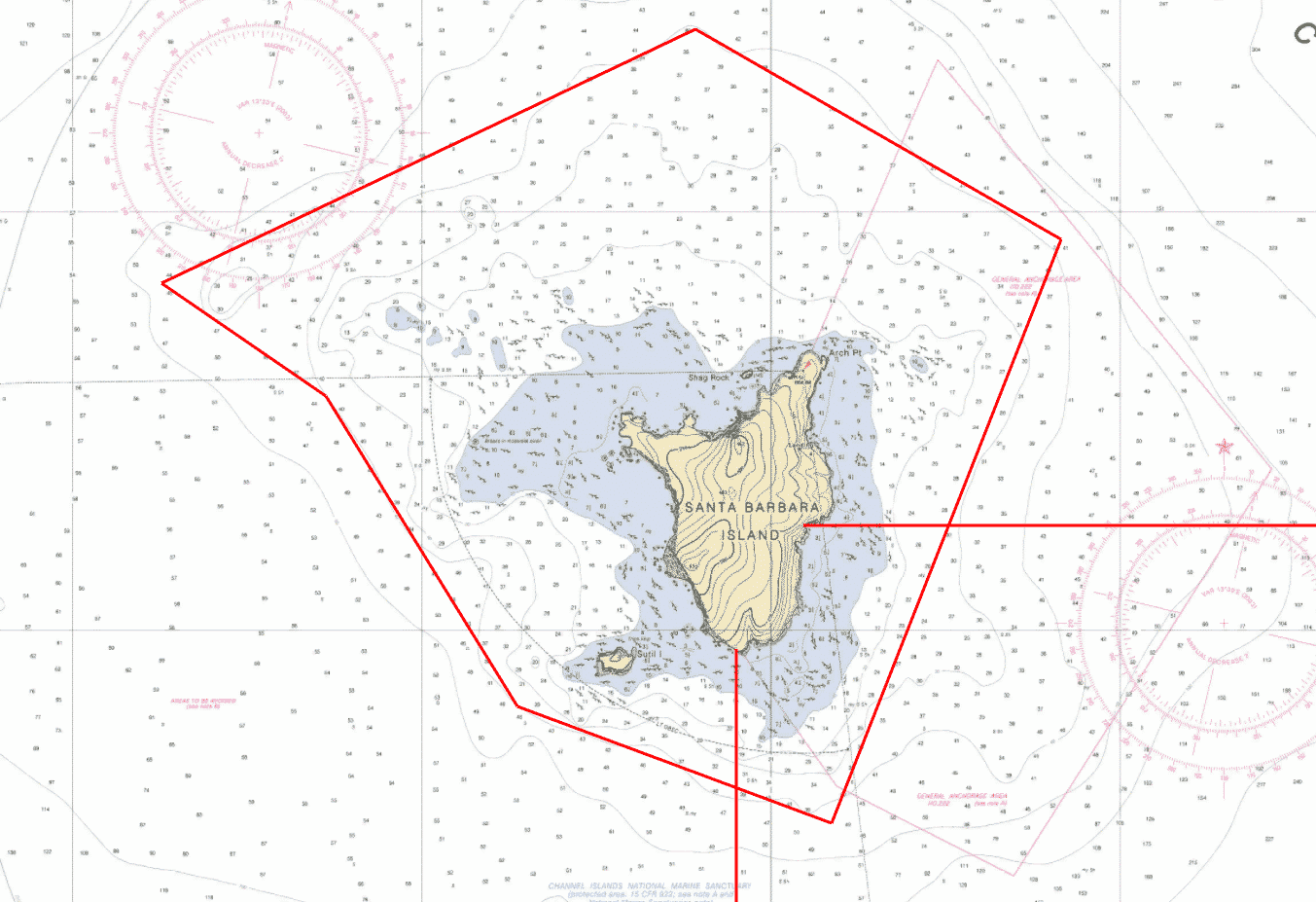 This photo shows the fathom lines around the dirt clod. They chose 6 individual waypoints and drew lines between them (the straight lines in the bottom right hand corner show the MPA closure). There are charts like this for all rockfish areas along our coast and it’s up to you as a rockfish angler to enter these waypoints into your GPS to make sure you’re legal. I’ll be writing a separate article about how to do that but in the meantime, here is a link to where you can find all of the information in on place. One other thing to remember is that these fathom lines apply to banks as well and only the Tanner and the Cortes have them, so that makes all other deep water banks off-limits to fishing. I saw a boat out on the Osborne when I was leaving the dirt clod on Friday and hope they were looking for bluefin because that bank is still off limits to rockfish.

Speaking of the dirt clod and bluefin tuna, Matt and I rockfished at the island and found them to be extremely sneaky and difficult to catch. The good news is that we stumbled on some biting fish at the very end of the day and were lucky enough to limit out before we had to race home so that Matt didn’t miss his sister’s birthday party. If you want more details about the rockfish bite you can read my full report here. While we were racing home, we ran over an area of whales, birds and what looked to be bluefin tuna but didn’t have time to stop and give it a good look. A few days later a friend that runs a 3/4-day boat reported seeing fish in the general area, so I talked Decker into going out and taking another look at the zone on Tuesday afternoon. We launched at noon and ran west past the Boot without seeing anything, so we bent it out and down to the west end of Catalina and ran the deep fathom curve along the front side of the island on a course for the Avalon Bank. We ended up finding some bluefin outside Long Point but they sank out before we got to them. We metered small scattered schools of fish at 80 to 140 feet but they wouldn’t bite a flat fall. A few minutes later it started blowing 20+ knots and we went home. Nice to see that there are still some tuna around after all this weather. 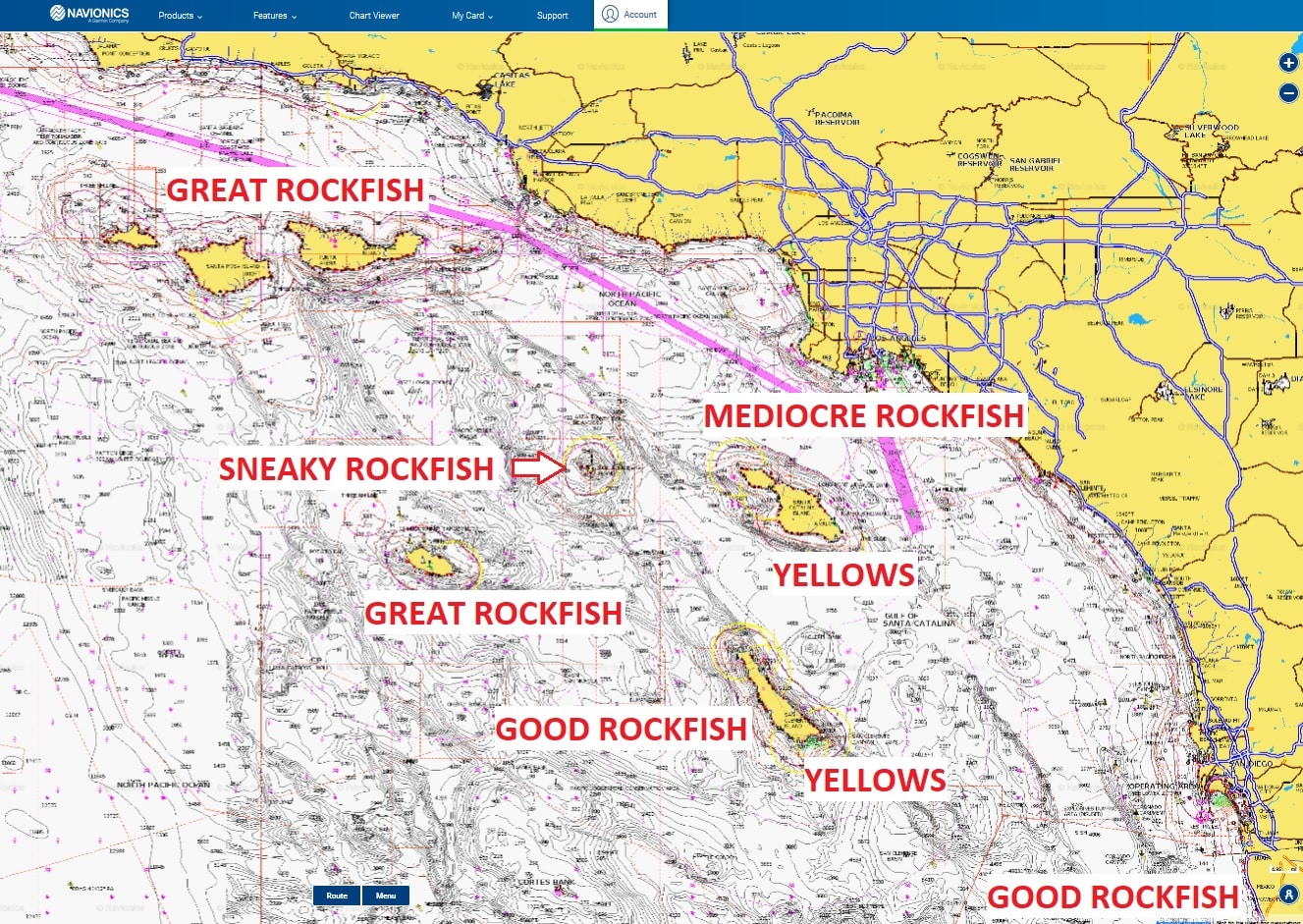 Since it’s mostly rockfish in this week’s report, I’ve decided to mark up my Navionics Chart with a more detailed description. Starting up north, boats are getting the best scores on big reds. I haven’t talked directly to anyone but based on the size and numbers of fish they are catching, they’re coming out of the deeper stuff that was previously closed. This pic from the Aloha Spirit shows off just how big the reds have been. 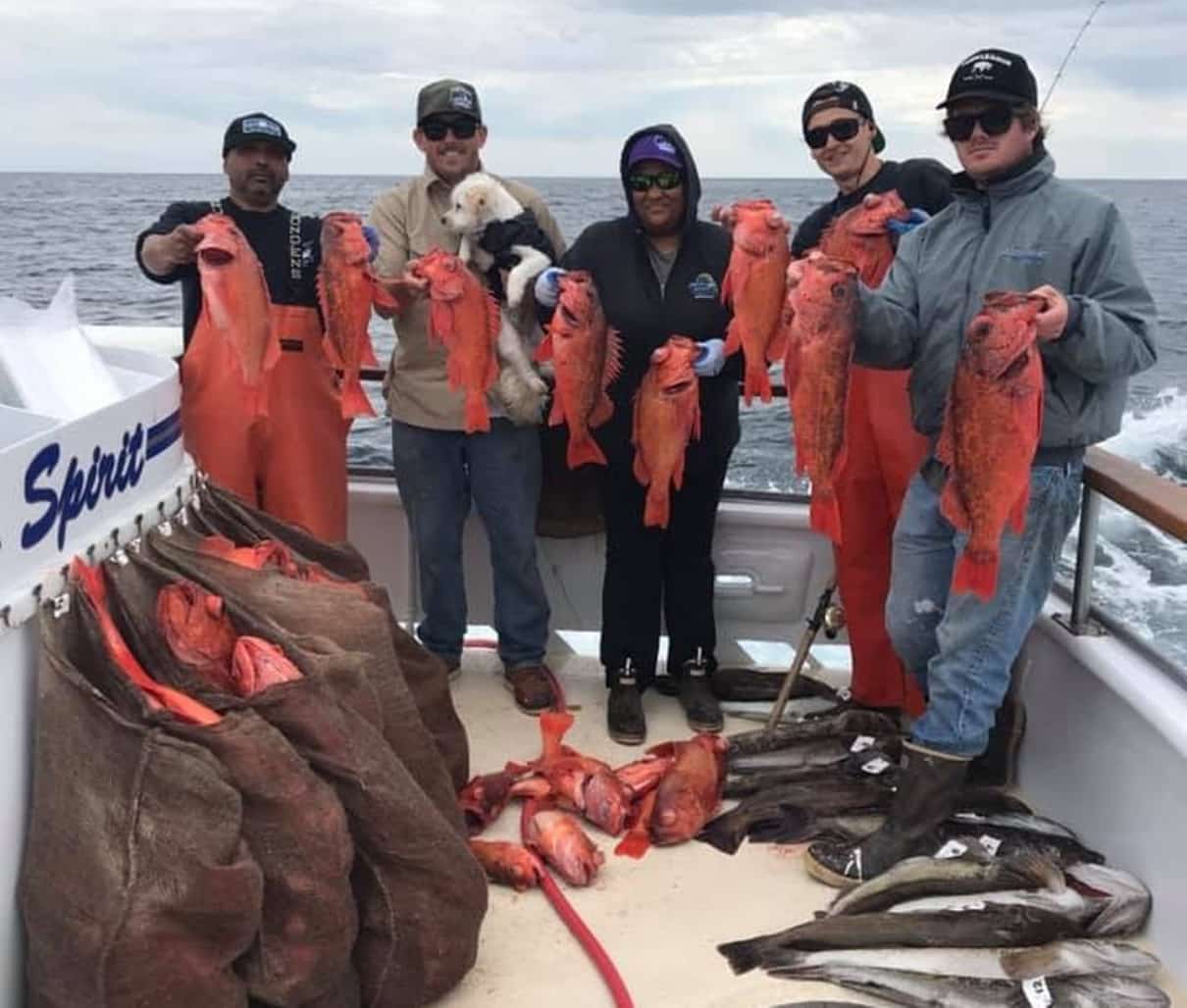 Boats fishing San Nic have also been catching some quality reds and if I were going on a sport boat I’d likely jump on a trip heading there because all of the fishing will be in less than 240-feet of water, which is a lot more fun than 450. Boats fishing San Clemente Island are also catching rockfish but the amount of red crab at the island has been making them hard enough to catch that I’d just rate it as good versus great. The good news is that the yellows are also biting at San Clemente Island and in my opinion that makes up for the slower rockfishing. 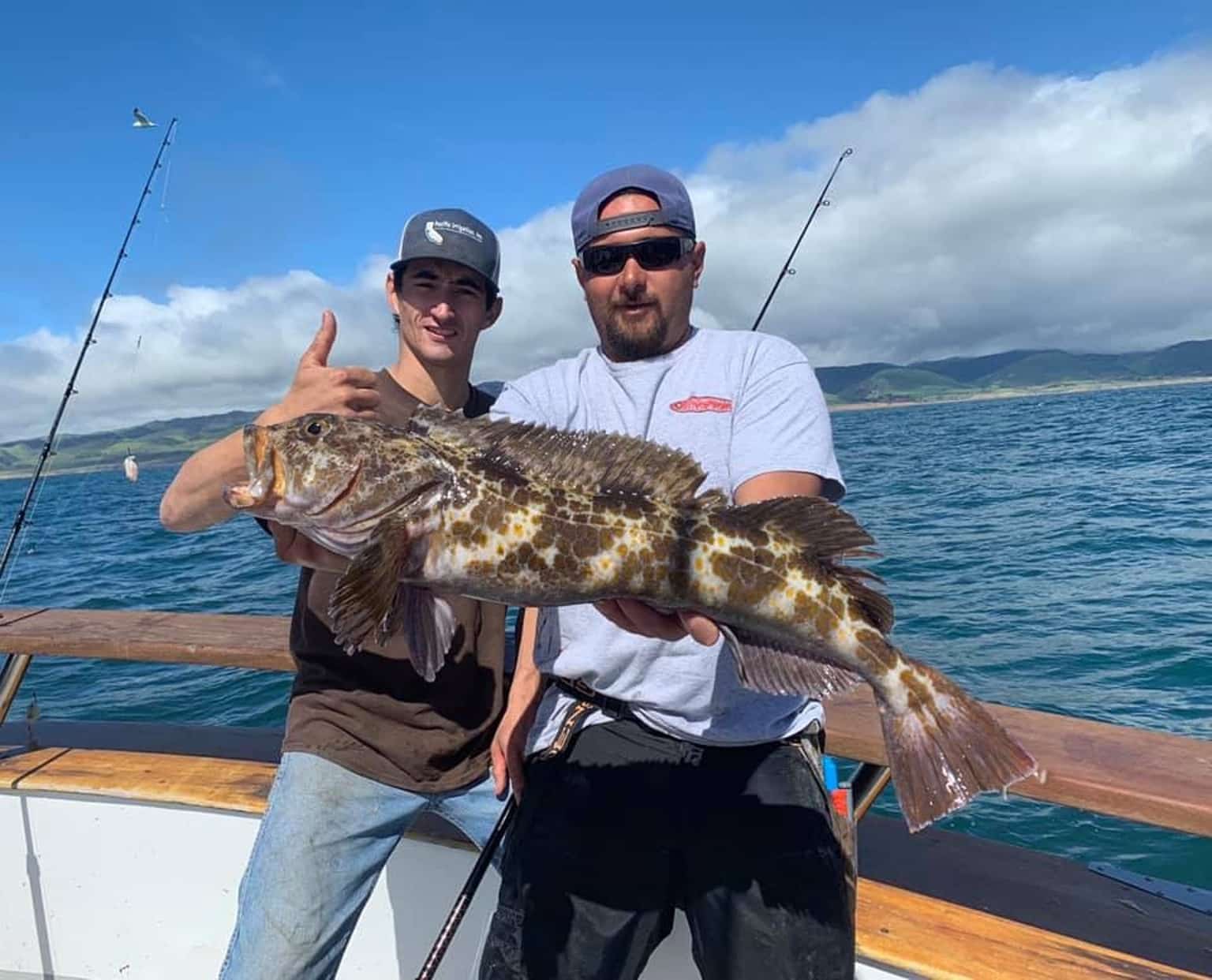 The rockfish are also biting along the coast, and while the fishing is better than it has been, I’d just call it mediocre in comparison to what’s going on at the islands. The local boats are still catching plenty of reds and some of them are big, but the overall average is considerably smaller. I’d guess the big rockfish and yellows are still biting down in the 1 1/2-day zone but we’re going to need some boats to get off the dock to go take a look. With decent fishing weather in the weekend forecast, I’m sure that zone will get some coverage. If you are heading out this weekend, keep an eye on the weather because the wind forecasts have been off lately. If it starts blowing unexpectedly hard, do what I did on Tuesday and immediately head for the dock; once the wind starts blowing, it’s not likely to stop.

If you aren’t fishing, you should consider heading over to the Fred Hall show this weekend.