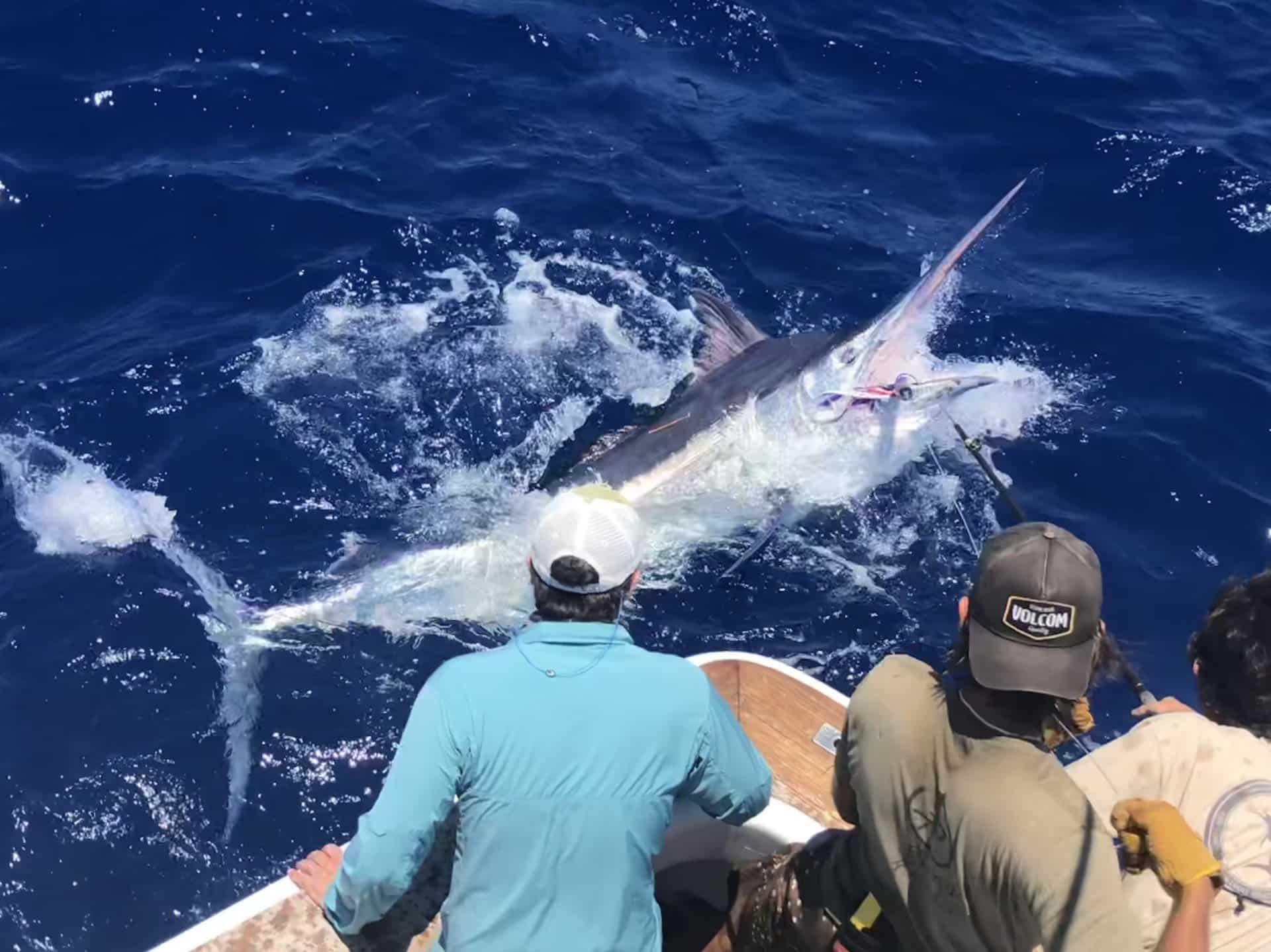 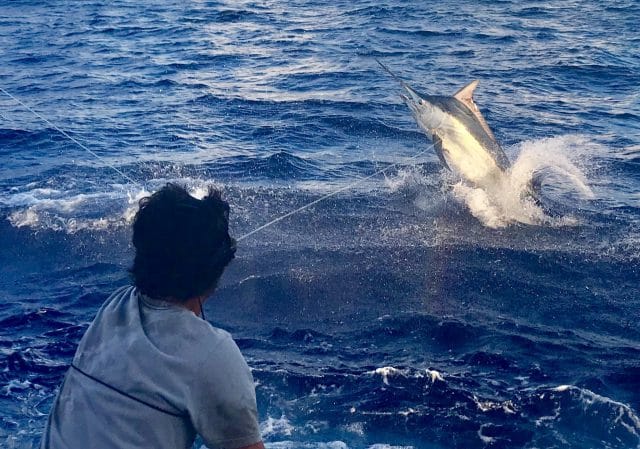 I wrote a report for BD Outdoors two years ago about a remarkable trip with Nomad Sportfishing in Australia.  It was really a trip of a lifetime. The only missing part of our fishing excursion to Queensland was the lack of marlin on the Great Barrier Reef. They came a week after we left and that season was a good one, with a late start.
My fishing partner Vince Ward and I know better than most, that regardless of how good a fishery can be, that timing is everything. So this year we booked a short four day Great Barrier Reef marlin fishing trip with Legendary marlin fishermen Tim Richardson and his ace crew on his game boat Tradition. Since we were going back for another session on the Reef for marlin, I talked 8 of my friends to join us for another Nomad trip, this time traveling all the way to the north end of the Barrier Reef and the remote Torres Strait region on the top of the Australia. 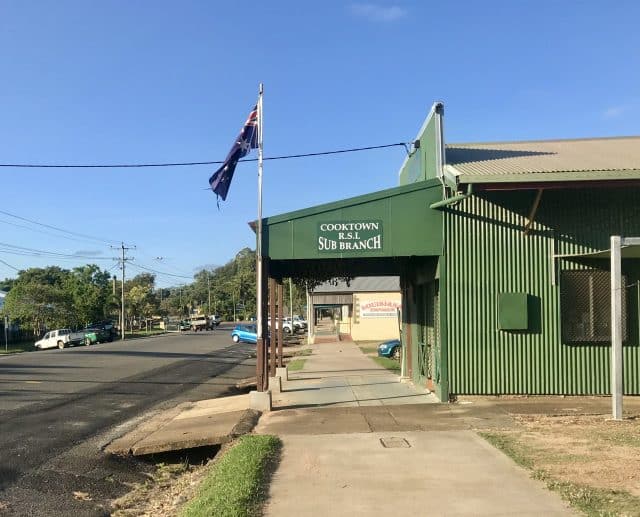 My Alaska Airlines Mileage ticket yielded a round trip ticket for 105 thousand air miles. … A friggin 35 hour travel odyssey through three countries… But I made it just fine. I met up with Vince, another friend Travis, and Charlie who as along to take photos for Tim. We rented a car and drove the last four hours to the quaint fishing village of Cooktown. When I do this trip again, I would fly directly into Cooktown. The Sovereign hotel was a perfect place to relax before and after the mayhem…

The locals were super friendly and we were able to turn off the news for a couple of weeks, which was awesome!!! 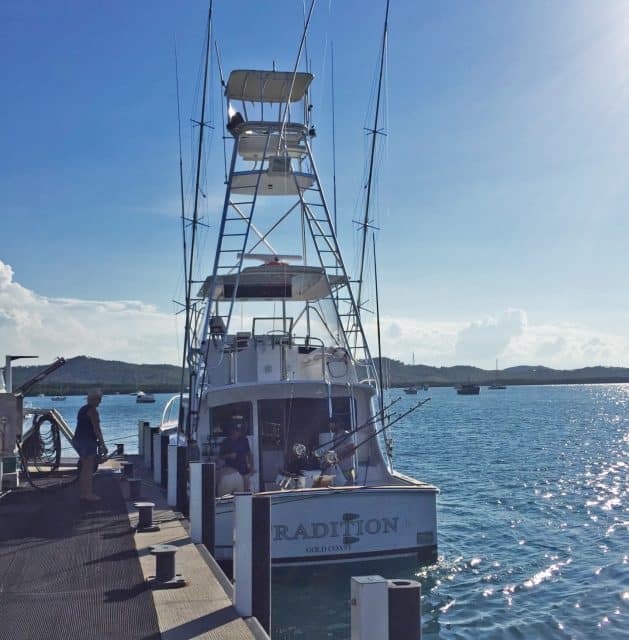 Tim and his ace crew of Garrett Penely and Alex Tallman had everything ready for us. We enjoyed a great dinner and took off early on the morning of November 1 for our trip. The deal on the Great Barrier Reef is that there are two times that the bite tends to get good. First is having the right tide and the second is the time of day. When the sun gets lower, it casts a shadow over the face of the reef. Sometimes the combination of a building moon and subsequent tide lines up with the lower afternoon sun azimuth. Those two things together should mean our chances of seeing the magic that this place is famous for would be good. One of the first things Captain Tim asked was how big a fish would need to be to kill it, so there was no misunderstanding. I told him none of us came here with the intent of killing any fish but if it was a career fish for him and his crew, we would kill that but nothing smaller. 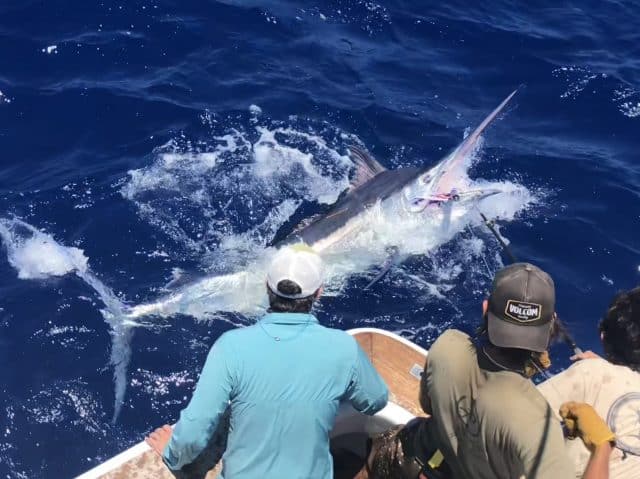 We were pleasantly surprised to see flat clam conditions for the entire trip. This is very unusual for the area but coming from Alaska, I could care less how rough the ocean gets. Two years ago Vince and I fished the reef is steep ten footers. So between the perfect weather and the fact that we hooked up 16 black marlin in four short days of fishing, it was the kind of trip that could not have been much better.

Most of the marlin we hooked up were between 250 – 650-pounds. The game plan here is to back down, hard on every fish to get a fast and clean release. Clearly the captains here have no problem with full rack reverse to get the fish to the boat quickly. Some of our fish were tagged and released in less than 4 minutes!! The larger fish took a bit longer. 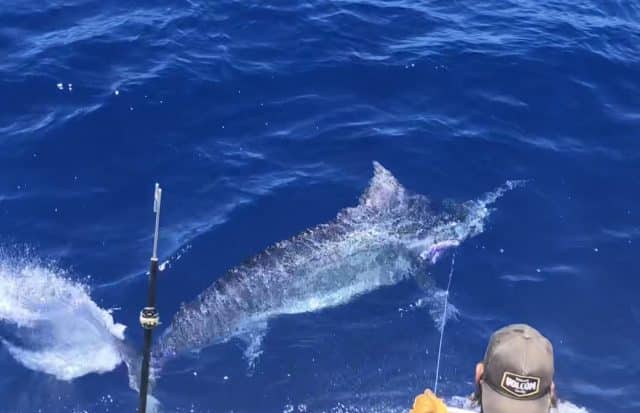 Did we tag any “Granders”? No we did not….Did we hook and fight three that were well over the 1000-pound mark in four days? We did and one of them, clearly the largest of the three, Travis ( who had never been marlin fishing before) pulled hard on the largest one for a solid twenty minutes. The fish was coming up like it should but was shadowed by a huge tiger shark. At the end of the battle, about 50-feet from the boat, the shark made its move and cut the leader before getting the to big girl. She swam off and left the shark hungry. This fish was the largest marlin I have ever seen, alive or dead and I have spent hundreds of days fishing for them. I would have rather had it live than get sharked and killed. Over all the meals, accommodations, boat and crew were perfect for our group. They were dead serious about catching big black marlin but still managed some serious laughs when were not hooked up. like I said, just right for our group. 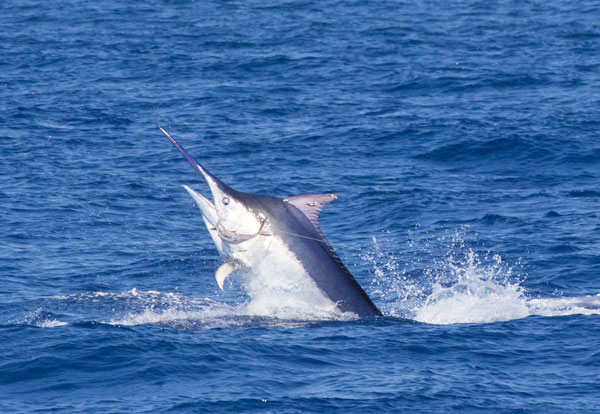 Aside from the big three coming off, which was fine with us, the trip could not have been better. As Captain Tim asked us everyday, “Did you see some cool shit today” and the answer every day was a resounding yes. It was the marlin trip from which any other will be compared to.

We all left feeling like we got the experience we were hoping for and some killer snorkeling on the reef in the mornings. That pretty much sums our of four days fishing with one of th best marlin crews in the world. 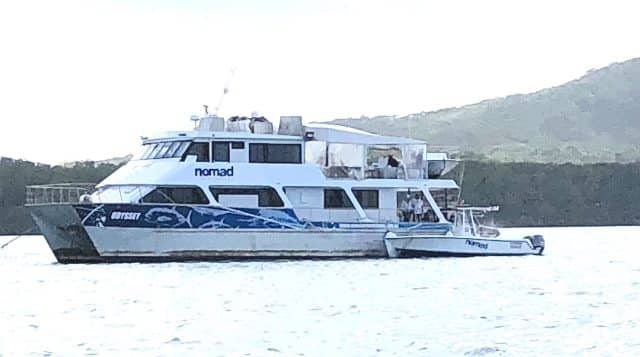 As if that wasn’t enough, we met up with our other friends for a 7 day jigging and popping trip with Nomad Sportfishing to the Northern Great Barrier Reef. 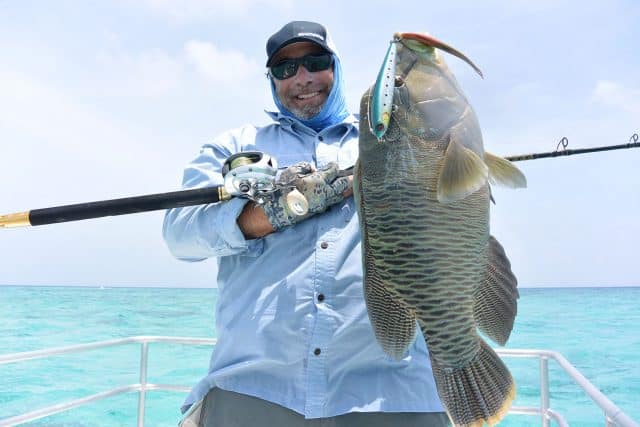 Here is a map of the trip. 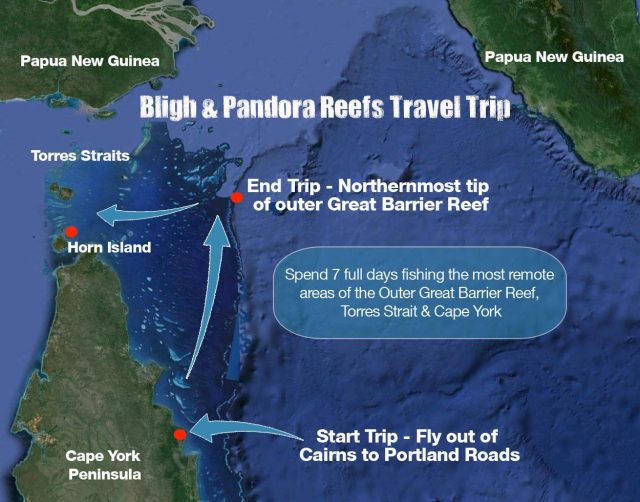 We were so far off the beaten path, we saw one boat the first day out there and not another person for the week. 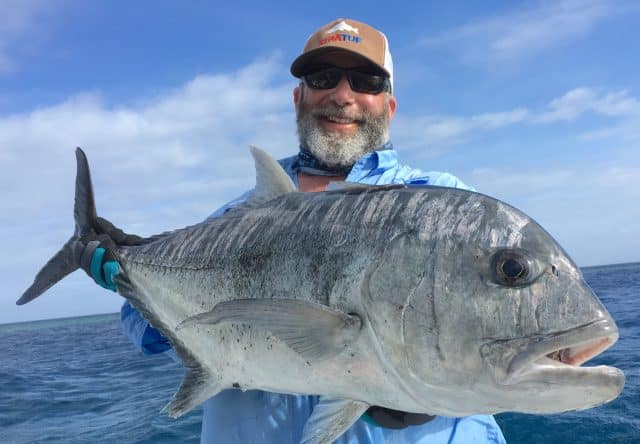 The fishing was the best I have ever seen with giant trevally, coral trout, maori wrasse, barred Spanish mackerel, dogtooth tuna, and a variety of variations of pargo and groupers including a battle with the protected Queensland Grouper of about 350-pounds, on our last day, that was one of the most difficult fish I have every pulled on.

As usually the crew, food, and gear was all in a league of its own. This is not the kind of trip a Charterboat captain from Alaska can afford on a regular basis, but it is a trip of the lifetime and we all felt that the cost of fishing and seeing grander marlin and a 300-mile streatch of untouched coral reef was hard to put a price on. 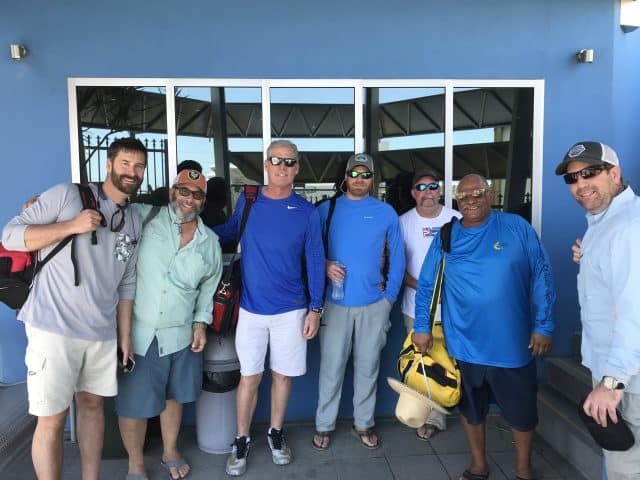 We all felt that our lives were richer than when we started. If you have the means, I would strongly recommend you take this trip or one like it while you still can!!