Every spring, large amberjacks invade the humps offshore of theFlorida Keys to spawn. Along with the amberjacks comes a population of big apex predators that show up to take advantage of a few quick meals. These predators include massive sharks, mainly bulls, tigers, hammerheads and a few makos. It makes for some exciting fishing with big, powerful animals.

The tigers are some of the biggest sharks we catch during the AJ spawn, and they put on quite a display with the 80-pound braided line we use to fish for them with. They don’t run like a marlin but they fight tough and are extremely strong. They take quite a bit of line and usually make a few runs before they go down deep.

In the last four trips we’ve caught seven tigers and one nice hammerhead. We’ve also hooked a double-header of big sharks. That was fun. 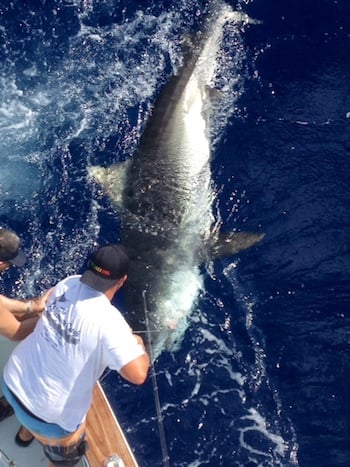 We have caught the sharks a few different ways, but it all starts with catching some amberjacks. Most people have a blast just landing the 40-pound amberjacks that we use for bait. They’ll reel in the AJ and feel all stoked and exhausted. But then they start scratching their head when they see us starting to rig the amberjack up for the a shark bait.

“You’re really going to use that for bait?” they’ll ask. You better believe it!

We’ve hooked the sharks running live amberjacks on the surface and pretty much pitch-baiting the sharks like you would a blue marlin, but most of the bites come from baits sent down to about 200 feet or so. We’ve caught them on butterflied fish and fillets.

Or you can just reel in an AJ real slow and see if it gets bit. All of the bites will come within a mile of the humps and you can fish just about any one of the humps in the Keys such as the 409 or Marathon Hump.

The sharks are protected so this is a catch-and-release fishery. We use circle hooks so we hook the sharks right in the corner of the mouth. When we catch them, we cut the line as close to the hook as we can and let them go. 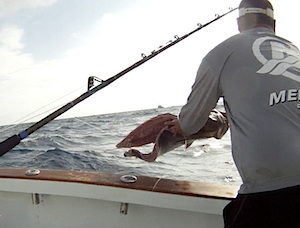 April is probably the best month to target the big sharks, but the bite generally lasts from March through June.

To find out more about shark fishing for big tigers visit www.budnmarys.com or call 305-481-0366.

Nick Stanczyk
Capt. Nick Stanczyk grew up fishing with the best captains and mates in the Florida Keys. His family has owned the legendary sportfishing mecca known ...