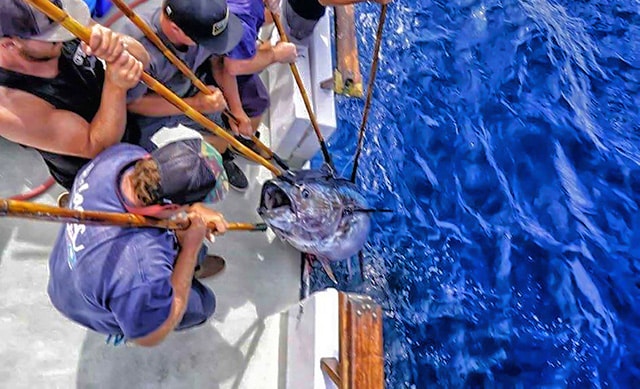 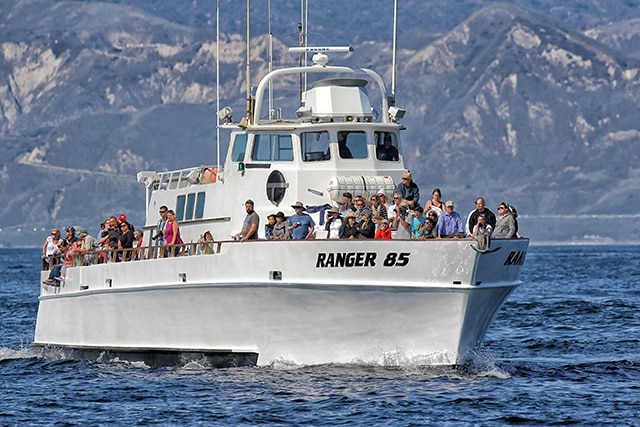 “That Fish” goes by many different names: game changer, defining moment, extraordinary catch, bucket list, or perhaps even a local, state, federal or international record. For one lucky angler on the Ranger 85 recently, it was a giant bluefin tuna.

Regardless, it happens when an angler and a fish share a moment in time that alters an angler’s life.

It often occurs unexpectedly, at any time to any random angler, from rank amateur to seasoned veteran. The results of the catch may affect others — captain, crew, and even other boat passengers who share an experience that will be etched in their minds for the rest of their lives.

According to Jack Vitek of the International Game Fish Association, “Nearly two-thirds of all IGFA World Record applications are for fish that were not specifically targeted.”

Passengers aboard the Ranger 85 that departed from H&M Landing on a 2-1/2-day trip targeting tuna offshore from San Diego on Sunday evening, September 17, including Joseph Rodr, from San Diego, were simply looking for a fun trip with plenty of fish.

The crew of Captain Robert Gray, Captain Jeff Bunde, Captain Richard Whalen, Dustin Burkette, Josh Cleveland and Paul Beyers had earned the admiration of the passengers and their peers. They were described as a “well-oiled machine” by Captain Frank Ursitti, managing partner of H&M Landing in San Diego, the oldest and West Coast’s largest and most diversified sportfishing fleet.

Many of the 27 anglers had brought their heavy gear in hopes of hooking one of the giant bluefin tuna that had been caught recently. That first day, within 30 miles of the harbor, they located yellowfin tuna early and after catching their limits, they spent the rest of the afternoon searching for kelp paddies holding dorado and other species. By late afternoon, Captain Gray had decided to go “beast hunting” on Day Two. 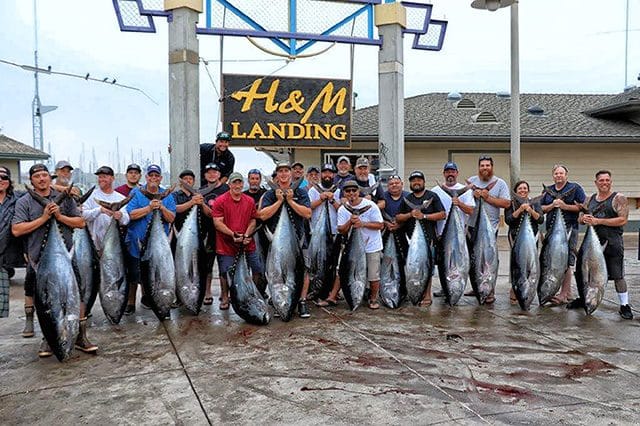 Hopes were high as RANGER 85 had scored a remarkable 54 bluefin tuna from 130- to 140-pound class recently.

Alayna Siddall, Sportfishing Association of California, Director of Science and Communications, confided recently that, “Based on a length frequency histogram for bluefin tuna samples on the Commercial Passenger Fishing Vessel (CPFV) this year, it appears that about 6% of all the fish that SAC had measured exceeded 100-pounds. 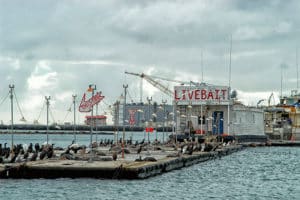 top off the bait tanks that afternoon before heading out beyond San Clemente Island where schools of giant bluefin tuna containing fish from 30- to 200-pounds+ had recently been spotted. Then they traveled in the dark in order to be in the zone by gray light.

They hooked one on a jig early, landing a 160-pounder on 80# braid; soon after they located a large school of tuna on the meter and slowed to set up a drift. Gentle winds and calm seas were a welcome bonus. 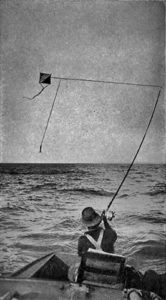 By mid-morning the breeze increased to 8 to 12 knots; however, they were still metering tonnage of giant bluefin tuna. The crew had spent countless hours fine-tuning their technique using the kite — a method introduced over a century ago in the early 1900’s in California. Skipper George Farnsworth was credited with inventing the kite-style of fishing after the birth of the Tuna Club at Avalon on Catalina Island.

The crew did scratch a handful of bites on the kite, but couldn’t get them to stick. Then, almost simultaneously, four rods bent nearly double as angry hooked tuna sounded! In the mayhem that followed, a loud snap echoed as the line broke at the knot, confirming that two had been spooled and another line broke, leaving only one angler, Robert, still connected, fighting his fish from the bow.

Once again Captain Gray deployed the kite and was working it himself as Rodr, fishing on the boat for the first time, looked on. Hearing a commotion on the bow, Gray handed the rod to Rodr and rushed forward. He made it in time to see a 70-pound bluefin come over the rail. Returning, he checked the meter to confirm they were still on top of the school and as he rounded past the bait tank, Rodr came into view with rod bent double on the rail; the hooked fish sounded, then sounded some more, finally slowing with maybe 40-yards of line remaining on the spool of the Okuma Makaira filled with 130# braid. 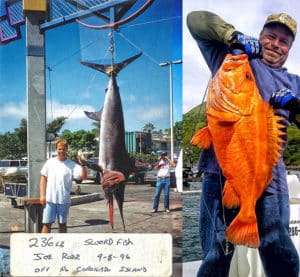 This wasn’t Rodr’s first rodeo. With several billfish in his sportfishing background, including a 236-pound swordfish that had taken eight hours to land, as well as a 90-pound bigeye tuna, a record-breaking yelloweye rockfish in Alaska, plus a 90-pound sturgeon released locally at Lake Cuyamaca, he quickly settled into the “give a little/take a little” tug of war. Captain Gray observed that several times Rodr had that “deer in the headlights” look as he continued his marathon battle with what might possibly be the largest fish he had ever hooked.

Agonizingly slow, the amount of line on the spool grew as Rodr continued to pump and wind. When one of the other passengers hollered, “COLOR!” his contorted grimace slowly dissolved into a victorious smirk as he watched the giant bluefin tuna make tighter and tighter circles just beneath the surface.

Five crew members stared at the shimmering bluefin, ready to pounce when it broke the surface as an exhausted Rodr struggled with those final cranks on the reel during the last few moments of the one hour and forty five minute battle. 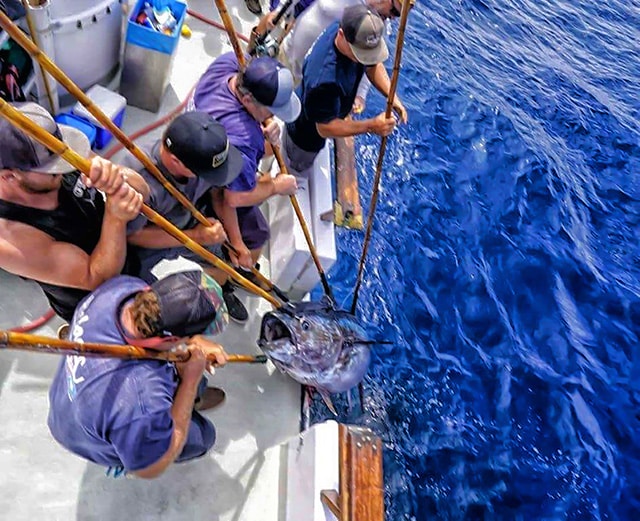 Gray and his crew wrestled the monster though the door onto the deck as excited passengers and a very weary angler all whooped and hollered their approval of the catch. A few captured the moment with photos and video.

After a brief celebration, it was back to fishing; the bites continued and before pointing the Ranger 85 for the landing, two additional 150-pound class bluefin had hit the deck.
On the way in, the crew measured the giant fish … 83-inches long with a girth of 5-feet, which according to the formula had Rodr’s giant bluefin tuna weighing approximately 373.5-pounds. This information was passed on to an excited Captain Frank Ursitti back at the landing, who in turn notified the media of the extraordinary catch.

By the next morning, a crowd had gathered to greet the returning Ranger 85 as she backed into the slip at H&M Landing in Point Loma, 7:30 a.m. September 20.
Before all the lines had been secured, Ursitti was aboard, peering into the hold and was quoted as saying

“Whoa! Jumbo!” to which one of the passengers replied, “It took five gaffs to get it aboard,” 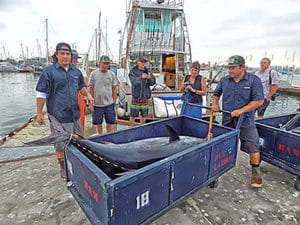 As the crew struggled to push the cart with the “fattie” up the ramp, onlookers, along with landing employees, media — including TV cameramen, newscasters, local newspaper and periodical reporters, — gawked. Everyone debated the weight as it was hoisted on the scale. Would the giant bluefin tuna be more or less than the 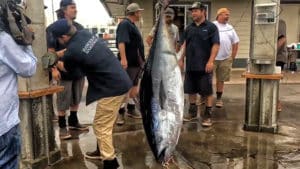 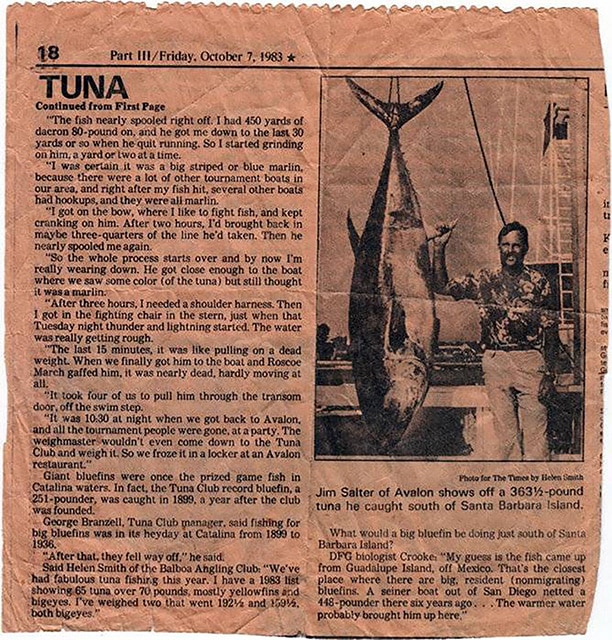 According to Steve Crooke, Scientific Adviser for Sportfishing Association of California, “The biggest rod and reel bluefin tuna landed on the West Coast was a 363-pound, 8-ounce fish weighed at Balboa Angling Club in 1983. I saw the fish when they brought it to the club. It’s the club 80# line class record. The guy (did not) turn it in for a state record. (It was) caught on a Black Penn 9/0 with 80# Dacron. It almost spooled him several times.”

That fish caught by Joe Rodr has touched many lives besides his own.
Sportfishing Captain Robert Gray was equally as excited about the catch as was his entire crew. That fish has been dominating their season and they have perfected their techniques resulting in record catches for not only the customers they serve, but shattering boat records as well.

“We could not be more stoked on the results that we ended up with this massive 345.1-pound bluefin tuna caught on 130-pound test,” Gray said at the landing to Sarmiento. “Fish of a lifetime, for sure.”

And of course, Captain Frank Ursitti and his staff couldn’t be prouder of both the angler’s catch and crew’s performance for the season.

So, in a fishing year filled with remarkable quantity and quality, Rodr’s single catch will be remembered for many years to come; it underscored what a spectacular local season 2017 has been so far … and it’s not over yet!