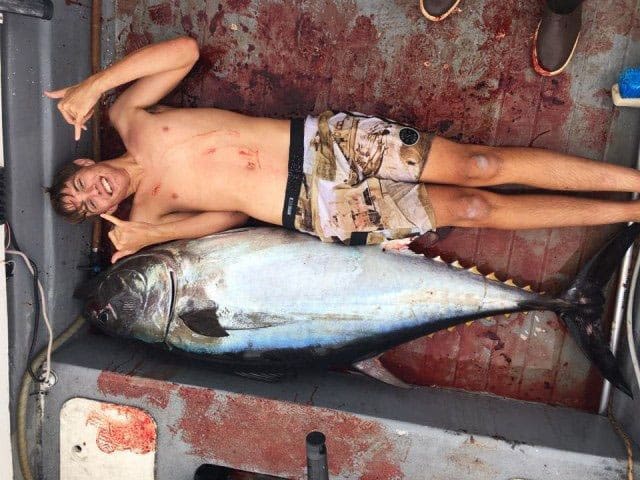 Summer came to Southern California with a bang over Memorial Day weekend with an unprecedented bite on big bluefin tuna. The fish were so big that by Monday afternoon the guys who fishing the zone were referring to fifty to sixty class fish as small, 80 to 120-pounders were good ones and those over 150-pounds were big. With multiple 200-plus-pound fish making it to the docks since Sunday, unprecedented truly is the only way to define it. While the bite was off a bit on Wednesday, it was pretty good during the rest of the week. A friend of mine, who will remain nameless because he left work early to go to a “dentist appointment” launched out of Shelter Island at 1 PM on Tuesday and was done with limits of 60 to 80-pound fish for him and his brother before 4 PM. It’s just been that good.

So, what should we expect this weekend? Well, I’d imagine the local banks are going to get pretty crowded and you’re going to need to work to find an area of fish you can have to yourself. There was quite a bit of boat traffic last weekend as well, but there was a big enough spread of fish that you could get away from the fleet. During the trip I took on Sunday we ended up having a couple of boats trying to run on the same schools we were fishing and had to leave. It was tough to drive away from the first fish we’d seen in hours, but we certainly weren’t going to catch anything with the other boats chopping us up. That ended up working out pretty well because we found more biting fish just a couple miles away.

While yachts are getting some of the really big fish on slow trolled mackerel or on the kite, most of the big ones are coming on jigs and poppers. On Sunday, I had a 200-pound class fish eat my Tady 45 ten feet from the boat. Luckily it came off and I didn’t have to fight a lopsided battle that I probably would have lost.

There were a lot of those lopsided battles fought over the weekend and most were lost, but some of the more experienced anglers ended up winning. Rick Maxa got a 205 on his 10′ jig stick Monday, Justin Cardenas got a 200 and Dave Pfeiffer landed another jumbo on surprisingly light tackle. There aren’t too many odds you can stack in your favor if you hook a big one, but having new line, heavy hooks and a properly set drag are mandatory. And like I said in my previous article, you need to pull hard and don’t be afraid to lose the fish. Sportboat anglers also have an opportunity to get on these fish, by jumping on a 3/4-day trip. The San Diego out of Seaforth Landing got on them Tuesday, but couldn’t repeat on Wednesday despite seeing lots of fish. If you want a better shot at getting a tuna, I’d recommend jumping on a 1 1/2-day trip. The Pacific Queen had 15 bluefin and limits of yellowtail on their last trip. These trips are making the run down to Colonet and spending part of the day fishing tuna and the rest fishing yellows. It’s actually a good bet because if you strike out on one you have the other to fall back on.

Other than that, the yellowtail are still biting at Catalina and San Clemente Islands. Fishing along the coast remains slow for everything except bass and rockfish. There are still some seabass biting in the Channel Islands and that bite should hold up through the new moon, but boat traffic is making it tough to catch anything on the weekends.