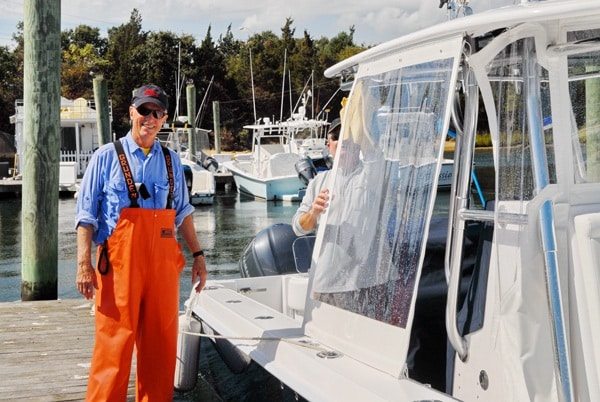 Dan Keating has owned several boats over the years and is an avid fisherman. When he decided to replace his aging center console with a new Yamaha-powered Contender® 32ST, he realized it would take some time to acclimate himself to his new fishing partner. Anyone purchasing a new boat might benefit from his experiences with the dealer and what he did on his own in the weeks after taking delivery. Dan purchased the boat from Mike Bucskowski, the sales manager at Hoffman’s West, a Contender® dealer in Brielle, N.J. Mike went through the boat’s features and benefits during the sales process so Dan had an appreciation of its finer points before closing the deal. The process of really learning the boat starts at the time of delivery when the salesperson goes over the boat in detail. It’s not just a courtesy; it’s the first step toward safe boating for the new owner.

“Dan is an experienced boater, so I had no concerns about his ability to run the boat,” said Bucskowski. “If he was a newcomer to boating, there would be additional assistance offered as part of the delivery process. We work with a professional captain who would spend time with the buyer teaching the basics of running the boat. They would also spend some time on the water together. It’s more involved than taking delivery of a new car, and we try to match it to the experience level of the purchaser. ” What’s behind door #2? When it’s the access hatch for the bilge area, it’s a lot of important things like bilge pumps, thru-hull water pickups for the washdown and livewell systems, fuel filters and more.

Dan and Mike spent a considerable amount of time together at delivery starting in Mike’s office where they discussed the warranties for the boat and Yamaha F300 engines. Mike explained the manufacturer’s prescribed maintenance schedule and the break-in period for the engines—simple things the owner should do during the first few hours of operation. He encouraged Dan to take the time to familiarize himself with the engine owner’s manual, which contains helpful advice that can ensure the engines will provide years of trouble-free service.

The job of familiarizing the owner with his new boat is very hands-on for the dealer. Dan’s Contender® was accompanied by basic paperwork, lists of the optional equipment and aftermarket products – things like the optional live well pumps, custom outrigger bases and, in Dan’s case, the bow thruster. The paperwork also included a layout sheet detailing the size and locations of the gas tanks (yes, you can even order optional fuel tanks) and the general deck configuration. With all of this covered, it was time to move outside to the boat.

Mike walked Dan through the entire boat from bow to stern, covering everything from the anchor locker to the boat’s electrical system and the location of the batteries, battery switches and breaker panels. At the stern, he spent extra time going through the bait well and bilge pumps, the location of thru-hull fittings, the valve systems for the live wells and saltwater pickups for the washdown system. He reviewed the external fuel filters and suggested maintenance intervals, then moved to the console. Here, they went over the switch panel and the Yamaha Command Link® engine monitoring system, electronic engine controls and the bow thruster.

The last thing was a brief introduction to the navigational electronics. “Mike did a great job of introducing me to my new boat and making sure I understood the importance of proper break-in,” Keating told us. “Things have definitely changed since I bought my last boat, and there is certainly a lot to learn in the coming weeks.

“Becoming familiar with a new boat is a process that starts with learning the basic systems and then running it to get to know how the boat handles, which I call ‘due diligence’ so you can operate the vessel to its potential with confidence – and in a safe manner.” The console and helm station are the operational heart of the vessel, and there are a lot of things to familiarize yourself with, especially in the age of computer-assisted engine controls, gauges and navigational electronics. There are also safety features like the kill switch system and even anti-theft devices.

Once the boat was berthed in its slip, Dan began a study period. “I took the engine manuals down to the boat and started reading with everything right there in front of me,” he said. “There’s nothing like being able to look, touch and push the buttons while reviewing the manuals for the instructions to sink in quickly. Programming the Command Link was an interesting project because it is so versatile and offers so many customizable screen menus. I set it up the way I thought I would like it, but after running the boat a few times, I went back and reprogrammed the display a little differently.”

Another challenge was learning to use the new touch-screen sonar, radar and navigational system. The capabilities of modern marine electronics are expanding at the speed of light, and going from the equipment he had to the new system would require time with the manuals, practicing with the units and getting out on the water.

The final challenge for Keating was getting an understanding of the handling characteristics of the new boat, which has a step hull as opposed to the traditional deep V of his previous boat. At slow speeds there is little difference in handling and during docking maneuvers, but it is critical to understand how any boat responds to the helm. How much power is enough when backing into a slip? How is the boat affected by cross currents at slow speed? How does it respond to steering input at various speeds? In the open ocean, how does it handle in different sea conditions? Break-in and scheduled maintenance are critical to starting and maintaining a rewarding relationship with your new outboard engines. They are the power that brings the boat to life.

“While I had the irresistible urge to take the boat fishing, I left the rods home a few times and took it out just to get better acquainted with how it handled,” Keating said. “It had similarities and differences from my old ride and I had to get in tune with them.

For example, the step hull handles rough water better at faster speeds, which is almost counter intuitive. When the sea gets choppier, instead of slowing down, speeding up a thousand RPM improves the ride. Every hull and engine combination requires a period of adjustment to learn what to expect from it.” Keating has had the Contender® for a bit over two months now and is comfortable with the boat and in his ability to interface with it. He’s still learning something every time he leaves the dock and that will continue for some time to come, but that’s just one of the great things about buying a boat.