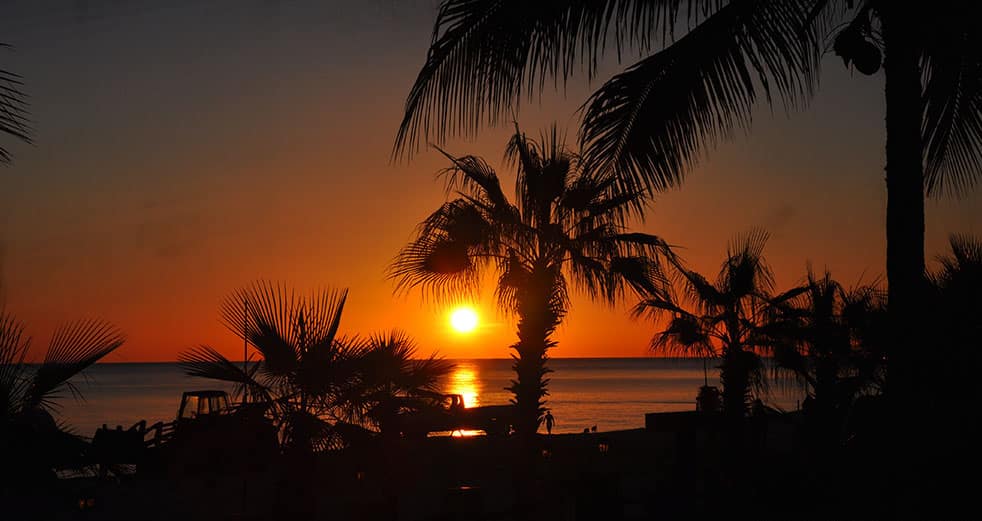 Pudge Kleinkauf, owner of Women’s Flyfishing, brought a group of her lady fly-fishers down from Anchorage, Alaska, in search of warmth and some red-hot saltwater fly-fishing at Hotel Buena Vista Beach Resort, located on the beach at Baja’s East Cape.

This was the fifteenth year in a row that Pudge has hosted the trip and she has it pretty well figured out. Guides Lance Peterson and Jeff DeBrown assisted, and the group had plenty of action every day out on the calm waters of the Sea of Cortez. There were plenty of “firsts” for the anglers, and so many triples that Lance lost count.

“Tonnage of skipjacks were caught by all,” he says. “We had 50 or more today on my boat alone, triple after triple. Yikes, I’m tired.” Congratulations to Anthony Hsieh on his swordfish caught with Capt. Steve Lassley. Anthony hooked two swordfish on the trip.

Hot spots seemed to be far apart with large schools of marlin being spotted 30 miles away in the Cabrillo Seamount area. Many viewed the ride worthwhile considering the results. One private yacht managed to rack up a double-digit score of striped marlin while most boats considered themselves fortunate if they caught several. Regardless of the day’s results, everyone had plenty of time to reflect on the day during the choppy ride back to port.

There were scattered yellowfin tuna found, but still nothing in any size or numbers. It is possible that they are out on the Pacific side but the water has been rough and few boats have been willing to go out there and get beat up on the slim chance of finding fish.

The other option was to remain closer to shore. On the Pacific side you could hug the beach and get as far north as Punta San Cristobal for some sierra and an “okay” yellowtail bite. A few snapper could be found in the rocks between there and the arch as well, but the swells kept many boats from getting close enough to fish for them. You had to be a hardy, determined soul to fish the Pacific side. On the Cortez side there were fish as well, but there seemed to be fewer sierra. Most of the boats worked hard to get a few fish and sardina were definitely the key to success.

Capt. George Landrum reports that on the bright side, the striped marlin have shown up; our fingers are crossed that they come in closer and start to bite in earnest soon.

This is the time of year when warmer currents push into Palmas Bay and on down toward the tip by late spring. The most favorable sign now is the variety of larger baitfish beginning to appear in the Puerto Los Cabos Marina channel.

Porpoise have begun to move in offshore, some with smaller yellowfin tuna travelling with them. Billfish are even farther offshore, too far for the panga fleet to reach and fish comfortably. Most of the buzz this week revolved around swordfish sightings though they produced few hook ups.

Not much action was found on the Gordo Banks. Still a chance of a larger-sized yellowtail, but this was a deal where anglers would be looking for a chance at one trophy fish, not big numbers, but with sharks and sea lions making the prospects more challenging.

Eric Brictson reports up to 8-pound sierra off of Santa Maria attracted most of the attention along with increasing numbers of schooling jack crevalle with small roosterfish mixed in chasing sardine.

As predicted several months ago when Rancho Buena Vista closed abruptly, the resort did spring back to life, thanks to Tony Marron, a 36-year-employee of the Ranch and his son, Tomas. If you visited RBV over the years, you’ll remember Tony as the Boat Dispatcher and basically the general person in charge. Tomas could usually be found at the desk when you checked in. The bar, considered by many the best bar location in Baja situated just a few feet from the water’s edge, attracted a crowd of mostly locals for the grand reopening this past week and according to Tony, that is just the beginning… Stay tuned!

In spite of reports of billfish sightings, including sails, stripes and a few swordfish showing at East Cape, most anglers this week preferred to remain closer to shore where the jacks, small roosters, skipjack and sierra dominated the action producing limits for most visitors.

Yellowtail were found in 150 to 250 feet of water off Pescadero, La Ribera, and the Lighthouse. Fish up to 40 pounds were biting jigged heavy iron and live sardina.

Rancho Leonero guests Tom Rutherford and Geoff Northrop of Pt. Loma, and Brian Rees from Santa Fe, New Mexico, turned in an excellent early April springtime catch which included a 35-pound dorado and two wahoo, one 40-pounder and the other fish weighing in at 60 pounds! Both wahoo were caught on trolled dorado lures.

Mixed bag is the best description for recent action. It is unusual to have yellowtail, billfish and dorado in the count all on the same day.

The blue-water species prefer the warmer water at the top while down deep, it’s still chilly which is where the yellowtail are hanging out. I know for a fact that it’s warmer on the top because the water visibility has gone to poop. The water was great blue for a bit, but as is customary this time of year, when it hits a certain temperature, the algae bloom kicks in so the waters gets green and cloudy. Not always the best for diving or fishing but it’s a temporary thing. The water keeps getting warmer then wham, it hits a certain gradient and all of a sudden all the algae dies and disappears. And the waters turn blue again.

High spots and the island reefs along with seamounts in deeper water produced a good grade of yellows. Meanwhile the pargo have begun schooling up in the same neighborhood underneath the schools of bonito plus some quality cabrilla.

Along the beaches, schools of small roosters and jacks kicked in which is great fun on a small spinning outfit. All of this action can be found at Las Arenas.

According to Jonathan Roldan, going north from La Paz puts you in the thick of herds of striped marlin that are migrating up farther into the Sea of Cortez. Typical of traveling fish, one group may charge everything behind the boat while the next batch may not be interested in baits, lures or anything. That said, marlin in April is a pretty good omen of better things to come.

Yellowtail are showing around Isla Carmen, also north of Loreto and San Bruno reef, Puerto Almeja Reef and Punta El Pulpito. They are difficult to get to bite because there are numerous schools of small sardines on the surface for them to feed on. Anglers are fly-lining live bait without a sinker and averaging four fish per boat, weighing from 25 to 35-pounds with a few even larger.

There was little action to report offshore as sea temps remain in the low 60s. In the esteros, the locals are reporting good to great action for corvina, grouper and pargo.

While the prime season has not begun, early Baja Fishing Report indicate that the yellowtail are already showing up in good numbers according to Jose Angel Sanchez-Pacheco of Cedros Outdoor Adventures.

The Association of Sports Fishing Captains of San Quintin, Don Eddie’s Landing, The Old Mill Hotel and the Department of Tourism of Baja are pooling their resources to host a Fourth of July Tournament.

The event will be organized and managed by the Association of Sports Fishing Captains of San Quintin. Don Eddie’s Landing will be the host and the tournament will be overseen by the Department of Tourism of Baja. The committee is currently assembling the prizes and Tournament Rules and Regulations. For those who plan to charter a boat, a list of outfitters and charter operators will soon be available on request. Please contact Tony at 011-52-616-165-6027.

The warmer 82-degree water is definitely moving back in earlier than expected, and the good fishing we usually get in May and June should soon follow.

Ed Kunze reports that the clean water is just four miles off the beach with boats averaging a sailfish or striped marlin each day. However, the inshore action is still holding strong, with the roosterfish making an early appearance. Normally we start targeting roosters about mid-May, but Adolfo, on the panga Dos Hermanos, went south to the antennas and released five roosters from 35 to 45-pounds for his French clients. The fish were taken on slow-trolled live bait and surface poppers.

Cheva, on the Dos Hermanos II fished inshore with Troy Sturm of Minnesota. Troy and his wife caught about 20 fish, including lots of sierras, a few chulas, and a couple of other species.

Thanks for joining me on my latest journey. I will do my best to be your eyes and ears for the Baja fishing scene, but it’s a two-way street, and I hope that each of you will be mine. Let me hear your Baja stories by emailing them to me at [email protected]