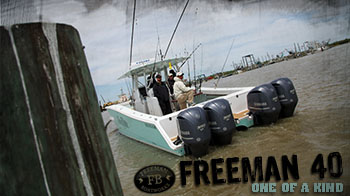 On a recent trip to Venice Louisiana, the BD crew had a chance to experience the one of a kind monster 40 foot Freeman Boatworks Catamaran.

40 Freeman at the dock Freeman Boatworks have recently become the vessel of choice for many Gulf of Mexico captains. On a walk down the docks of Venice Marina you may see several of the popular 33′ models, but today, one seems to stick out a bit further than the rest…. about 7 feet to be exact! Holy forty freeman batman! When a gentlemen from Houston Texas was looking for a center console cat that could cruise 45mph, yet offer more size then the 33 footer, Billy Freeman’s answer was to build a one of a kind monster. In the past, the common rule that Cats could not keep up with mono hulls typically boiled down to horsepower. The solution – slap four outboards on it, two for each hull. Not so easy when you have to start from scratch with no mold and make a one off beast. Billy Freeman and the guys and Freeman Boatworks hard at work making this modern day Ark Ridiculously wide with 13 feet of beam, the 40 footer can afford to have a extra large console to house a bunch of electronics. Accommodations for many. When it comes to fishing the Gulf of Mexico, long runs and hairy seas are the norm. Throw a few beanbags in the back and enjoy the ride. Captain Kevin beach takes the helm and steers the Shockwave into the nasty while the crew naps on the ride out. Custom teak deck option really made this boat pop and felt great under your feet. Similar to the other models in the lineup, a step up to the bow platform gives you a whole new stage to fight a fish on. While still maintaing adequate gunnel height to dig into a fish, the raised bow area makes it simple to reach a rod over and around when the fish goes on an unexpected run.

Fishing from the Freeman Bow Giving a shout to Ted way up in the front while he pulls on some snapper! The 13′ beam really shines when it comes to walk around fishability. You can literally have two lanes of traffic on each side of the console!

Redfish on the inshore rigs Brant and Kevin welcome a nice redfish aboard the Freeman. Staging area for Tuna on their way to the box. Brant was not going to let us demonstrate the gaff and lift technique though… A shot from the bow back give you an idea of the space this thing has while brant recovers a blown overboard jacket, a casualty of 50+ Knot running. Which leads me to what everyone is probably wondering… how fast will this mother go? Loaded down with fuel, ice, tackle, and six guys, the hammers dropped… 51.2 knots on the GPS as this monster glided along like a magic carpet ride! While the design can handle 350 horsepower outboards, they choose to go with the lighter weight 300’s on this prototype.

One off custom 40 Foot Catamaran All in all, this has got to be the baddest center console I have ever ridden in. Fast and comfortable, this thing just ate up whatever you threw at it. With the track record of the popular 33′ model, I wouldn’t be surprised if we start seeing more of these show up. Until then, we had a blast on this one of a kind bad boy on the block.