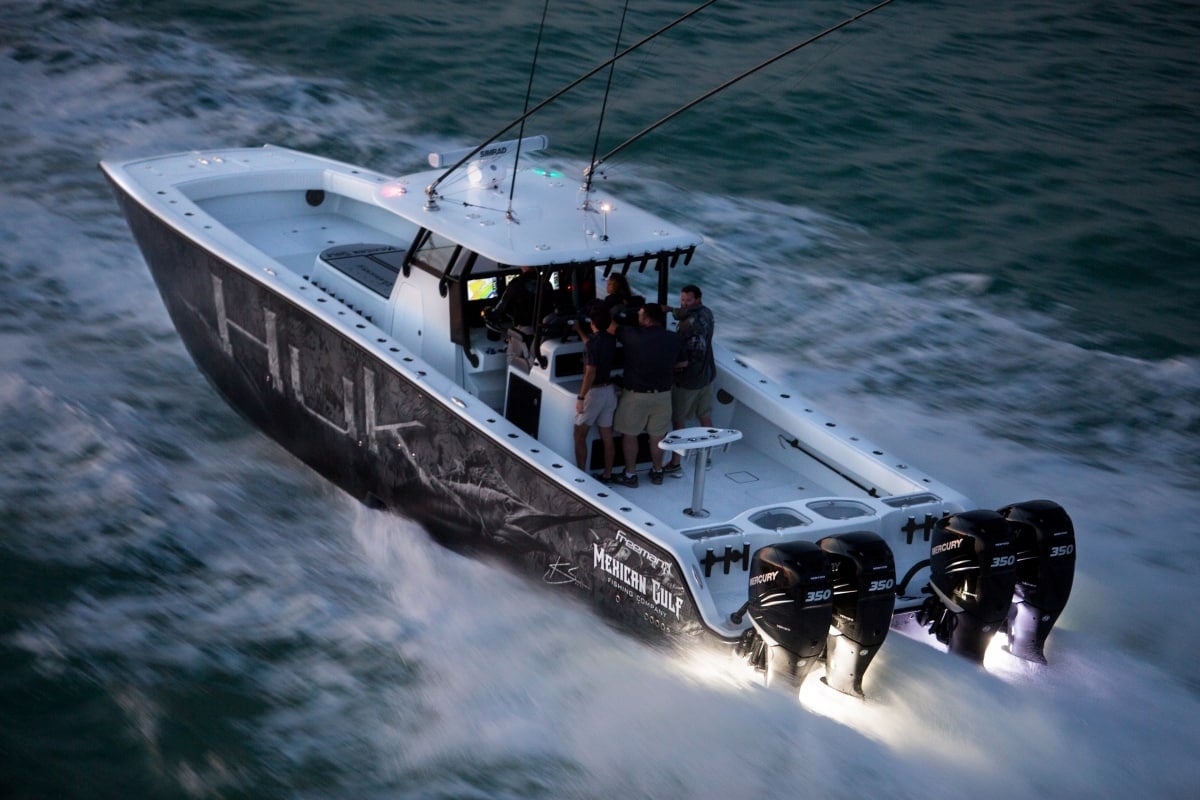 Whether you’re talking speed, seaworthiness, or fishability, topping the Freeman 42LR is going to be tough. Very tough.

The Freeman 42LR is very, very different from most of the center console fishing boats we’ve seen eclipsing the 40-foot mark in the past few years. Sure, many of those CCs offer excellent performance and plenty of fishing features. But most of them are yachts, just as much as they’re fishing machines. The Grady-White Canyon 456 is an excellent example – it’s one massive, beautiful, luxurious boat. But it also gives up quite a bit of fishable deck space in favor of a huge console cabin and bow seating areas. What about those of us who don’t really care about having a cabin? Those of us who want to prioritize fishing in all ways, shapes, and forms, period? This is where the Freeman comes in.

Performance on the Freeman 42LR

Let’s start with performance. Whether you’re fishing in a big-money tournament or you just want to shame the rest of the marina for fun, there’s no denying the advantage you get from being the first to arrive at the fishing grounds. And the Freeman 42LR can get you there at blistering speeds which will quite literally (cliché alert!) leave the competition in your wake. With quad Yamaha F350C outboards on the transom this twin-stepped boat can hit a blistering 71.6 mph at top-end and can cruise at 56 mph at 4500 rpm. At that mid-50’s cruise it gets 0.86 mph, shockingly good efficiency for a quad-engine boat of this size traveling at this speed.

“But wait,” you say. “You can hardly ever travel at those speeds because of conditions – you’d compress your spine in the first nautical mile even on average days.” Normally, we might agree. But remember, the Freeman is a powercat, and a big one at that. Different powercats can have their own set of quirks (snap rolls, outward leans, and sneezes all come to mind), but as a general rule of thumb, the reason people put up with them is because they ride hands-down smoother than comparable monohulls. And this isn’t mere speculation, it’s been quantified. Testing with a pair of 26-foot boats (a Glacier Bay catamaran and a Regulator monohull), rigged with accelerometers to measure the severity of impacts, has proven it. Running the two boats into identical waves at identical angles at identical speeds showed that that impact force was reduced by up to 50-percent.

“But wait,” you say again. “I’ve talked to guys who have had powercats that sucked.” Well, sure you have. Just as all monohulls are not created equal, all powercats are not created equal. The bottom line: Don’t take anyone’s word for it about any one specific boat, including ours. Wait for a rip-roaring nasty day and take a sea trial for yourself. ‘Nuff said.

Once you get where you’re going, you’ll discover that the 42LR is an all-out fishing machine that makes no sacrifices for frou-frou garbage like dinettes, settees, and sunpads. Sure there’s a head compartment in the console, but overall the console’s footprint is kept svelte in favor of allowing plenty of pass-through space, so you can duck-walk to the bow strapped into full stand-up gear with a 200-pound bigeye on the line if need be. And the console is kept relatively short, too, creating plenty of room for the couch-sized 800-quart coffin box in front of the console. Plug that thing, and you’ll be hauling enough fish for the next years’ worth of dinners.

If that’s not enough fish stowage capacity to satisfy your predatorial proclivity, note that the Freeman’s integrated deck fishboxes hold another 400-quarts.

The leaning post is similarly designed for fishing to the exclusion of all else. It has rather massive tackle stowage in the sides, a 185-quart cooler, and a freshwater shower so you can begin washing down the gear long before you back into the slip.

The transom livewell holds 70-gallons, is pressurized to eliminate sloshing, and has a baby-blue interior to help keep baits calm. If you need more bait-hauling capacity, one or both round 70-gallon deck compartments can be plumbed as well. We’d say get at least one upgraded so you can haul multiple schools of different livies. There are a few other options we’d consider must-haves, too. Outriggers, for example. And the coaming bolsters which ring the entire boat 360-degres around are something you wouldn’t want to do without. Same goes for the windlass – do you really want to haul up an anchor big enough to hold a 42-foot, 17,500 pound boat by hand? And while we wouldn’t say it’s a “must,” upgrading to the Llebroc bolster seats will give you a serious comfort boost.

Freeman says “A sea trial or visit to our facility will say what so many have found difficult explaining with words.” Well, it’s our job to try to put a boat’s essence into words, and we hope we’ve done so here. Still, to some degree we have to agree with Freeman.

Because as we pointed out earlier, a boat like this is so unusual, and the things you hear about it seem so over the top, that you really shouldn’t take anyone’s word for it. You should jump aboard and get in a run for yourself. Just don’t expect to find a yacht – this boat’s a natural-born fish-killer, period.