Just got back from 2 weeks in Zihuatanejo.
I fished with my regular Capt., Anuar on the panga "Peregrina".
Fished 3 days.

Day 1 weather was partly cloudy, 86 degrees, with a slight chop. Water was green all the way out to 20+ miles. Water temp was around 82 degrees.
We trolled out to 19 miles and eventually came across some birds in the distance. Trolled our way over and it was a school of YF tuna working bait.
The YF were 8-10# footballs. We pulled the larger trolling lures in and deployed 2 rods, one with a small hoochie and another with what appeared to be a type of clouser fly. We got in front of the school and immediately got a double hook up. I reeled both in and we ran back around front and hooked up again. We continued to run and gun for the next 1.5+ hrs until we had 13 in the boat. By that time the tuna were 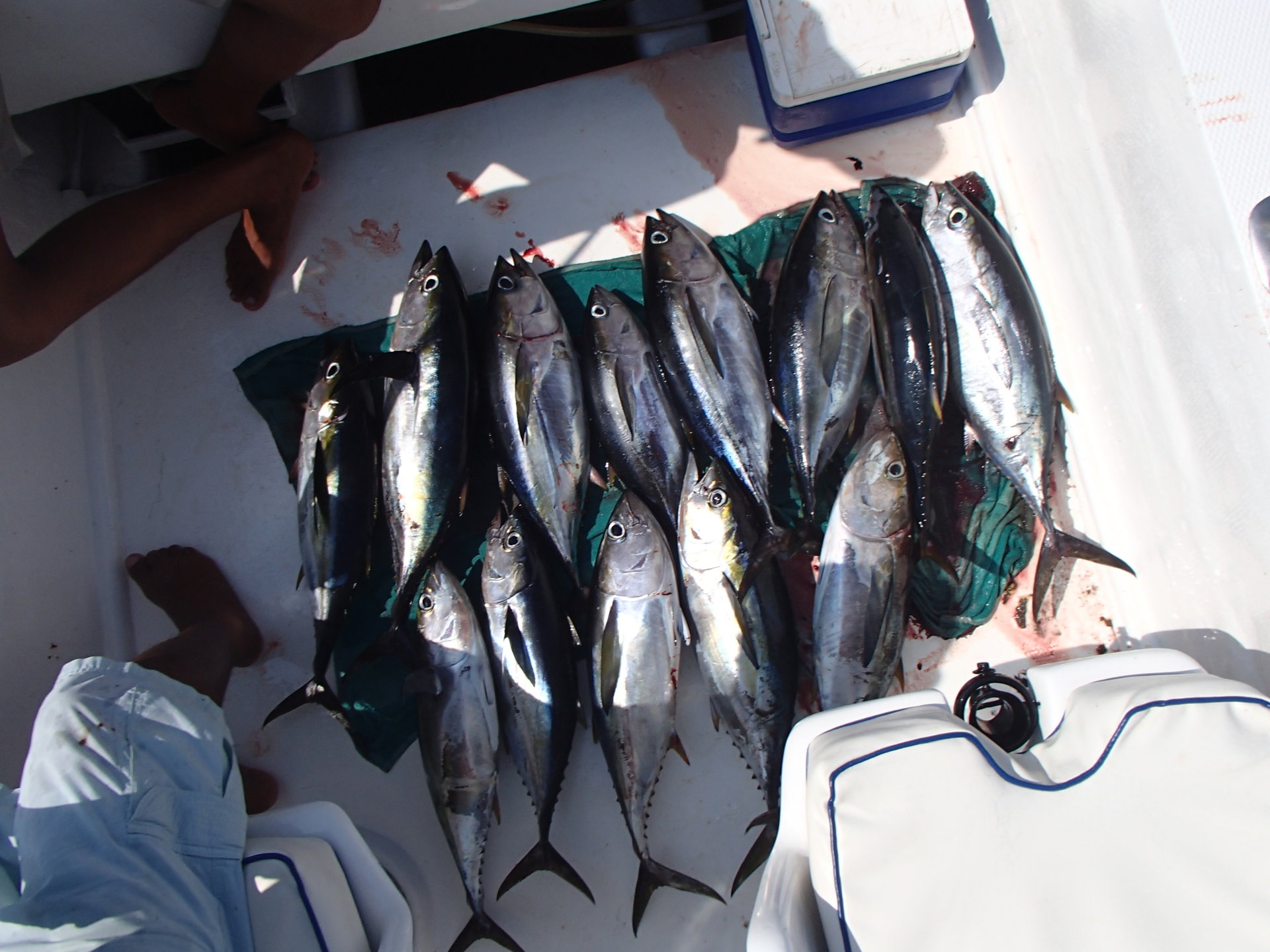 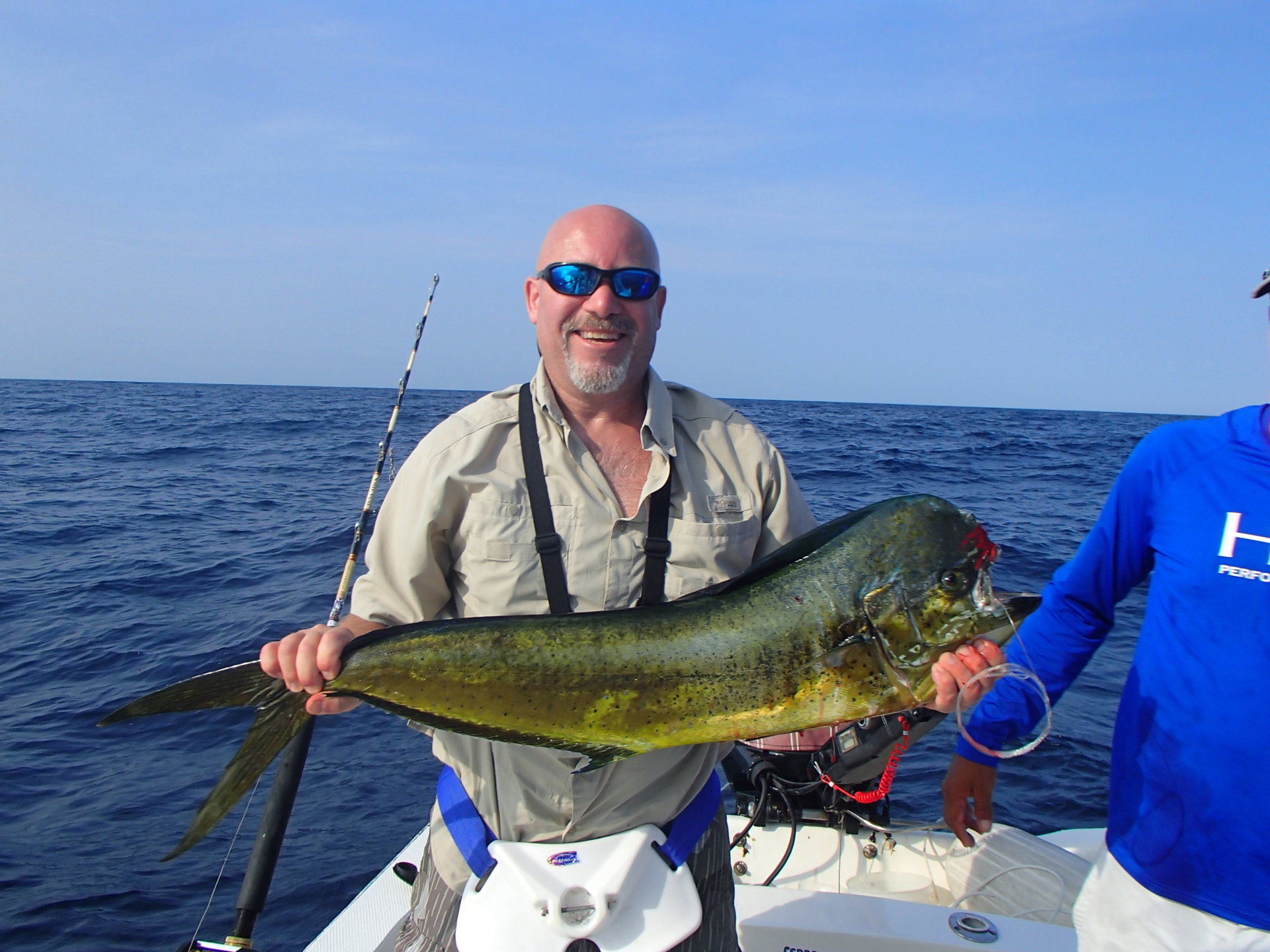 getting full and were no longer biting.
We decided to start trolling our way back in and fillet the tuna and get them on ice. We had a hook up on a sailfish, but had it come unbuttoned after a short run.

Day 2 the sea was rougher with a moderate swell and overcast skies. Water temp was about the same as the previous day.
We started trolling at about 7 miles and at around 8 miles we thought we had hooked a large sail as we had only seen it shake its head out of the water upon setting the hook. It dove and only surfaced once more during the fight and just another head shake on the surface before diving again. About 15 minutes into the fight it finally came into view below the boat and we saw it was a striped marlin. It was a small one but it pulled good. Got it along side, tagged and released it. Estimated about 75-80#.
About an hour later we hooked a Dorado. He came right to the boat, did a couple of jumps and then was brought boatside. Anuar missed with the gaff and it went nuts. It started jumping and ended up on the bow of the panga. I thought it was going to jump through the window and into the cockpit, but flipped back into the water. I was worried it was going to come unbuttoned, but we eventually got it alongside and gaffed it.

Day 3 was a week later, the blue water was at the beach.Water temp was up and the skies were clear.
We trolled all day and saw no birds and had no strikes. Saw a pod of spinner porpoise and they were searching for a meal as well.

There were several stripes and a couple of blues caught over the 2 weeks I was there.
Reactions: Whalebreath, cortezpirasea, CartridgeCalls and 1 other person

Thanks for the report. do you take your own gear down there?
agin thanks
Expand signature
Maurice

No. I used to, but with the extra costs for the rods, it wasn't worth it.
They have good equipment. I purchased the Shimano 30, 2 speeds for him, though. Traded for fishing trips.
Reactions: maurice escobedo

Sounds awesome Greg! I just found out last night that my new job has been delayed until after the first of the year so today I'm looking at flights and hotels, if it's not stupidly expensive last minute in December I might head back for a week or 10 days.

Thanks for the info Greg. Gonna have to look up trips for the wife and I.
Cheers.
Expand signature
Maurice