Kevin (owner of Young’s Tackle) sponsored an overnighter on the Eldorado for 6/6 so I quickly booked the trip that sold out quickly. Lots of love for the local shop as a bunch of his patrons along with some regulars showed up for the journey. Below is the swag provided by the La Palma tackle shop as everyone got something in the raffle. First winner was a new buddy I met on the trip (Raul) with Mac & Kevin handling the giveaway. A young angler with his winning. 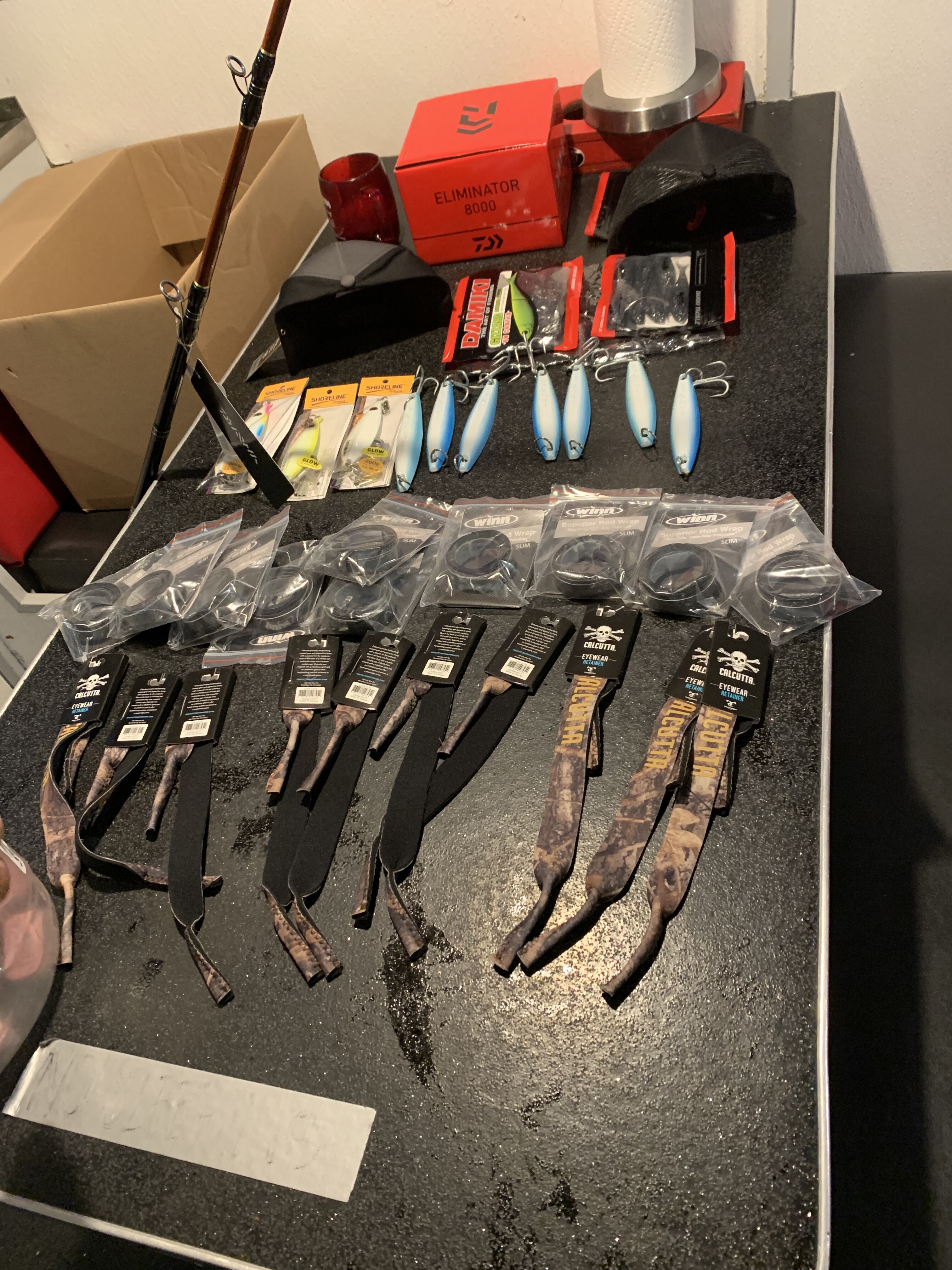 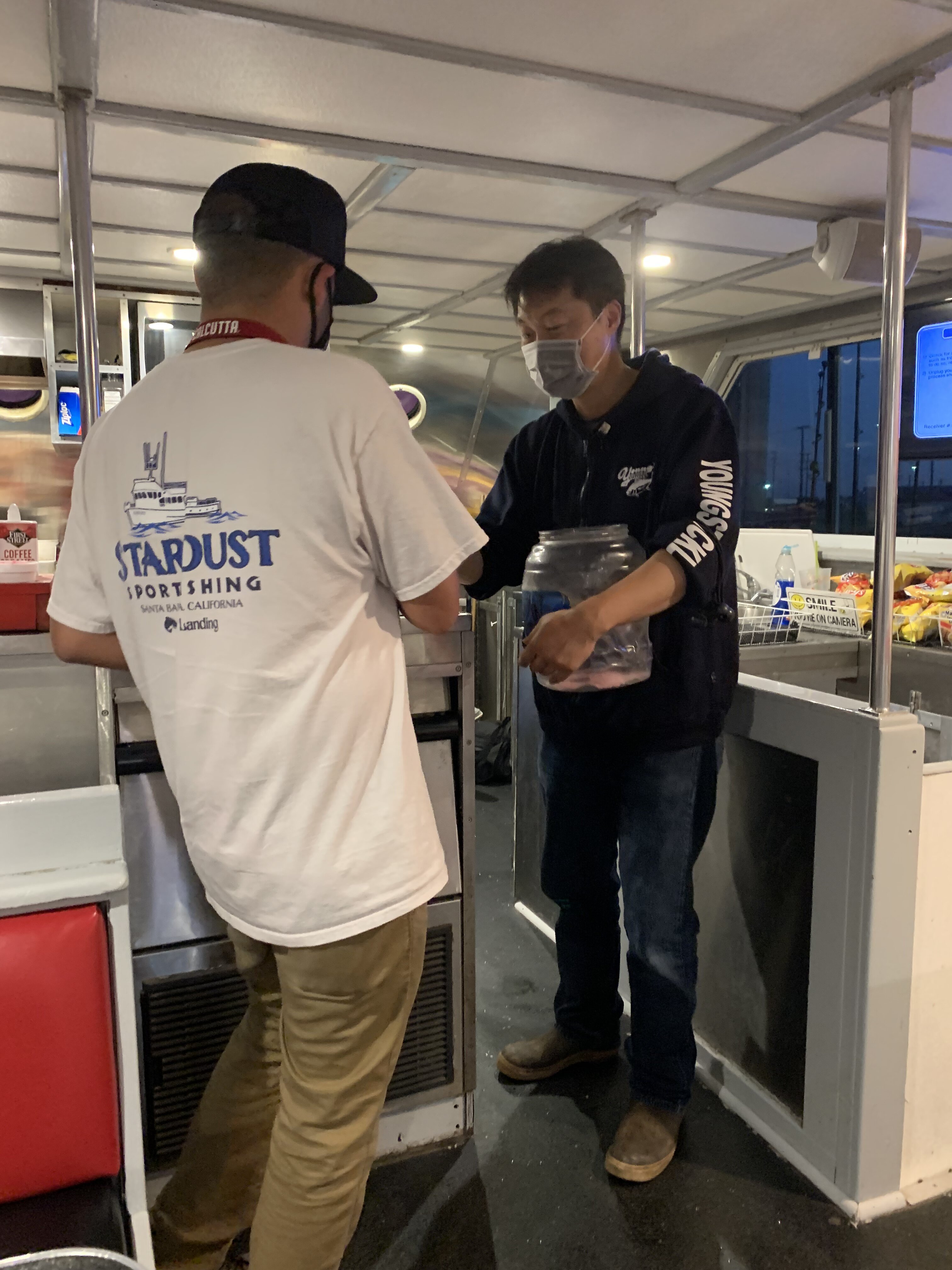 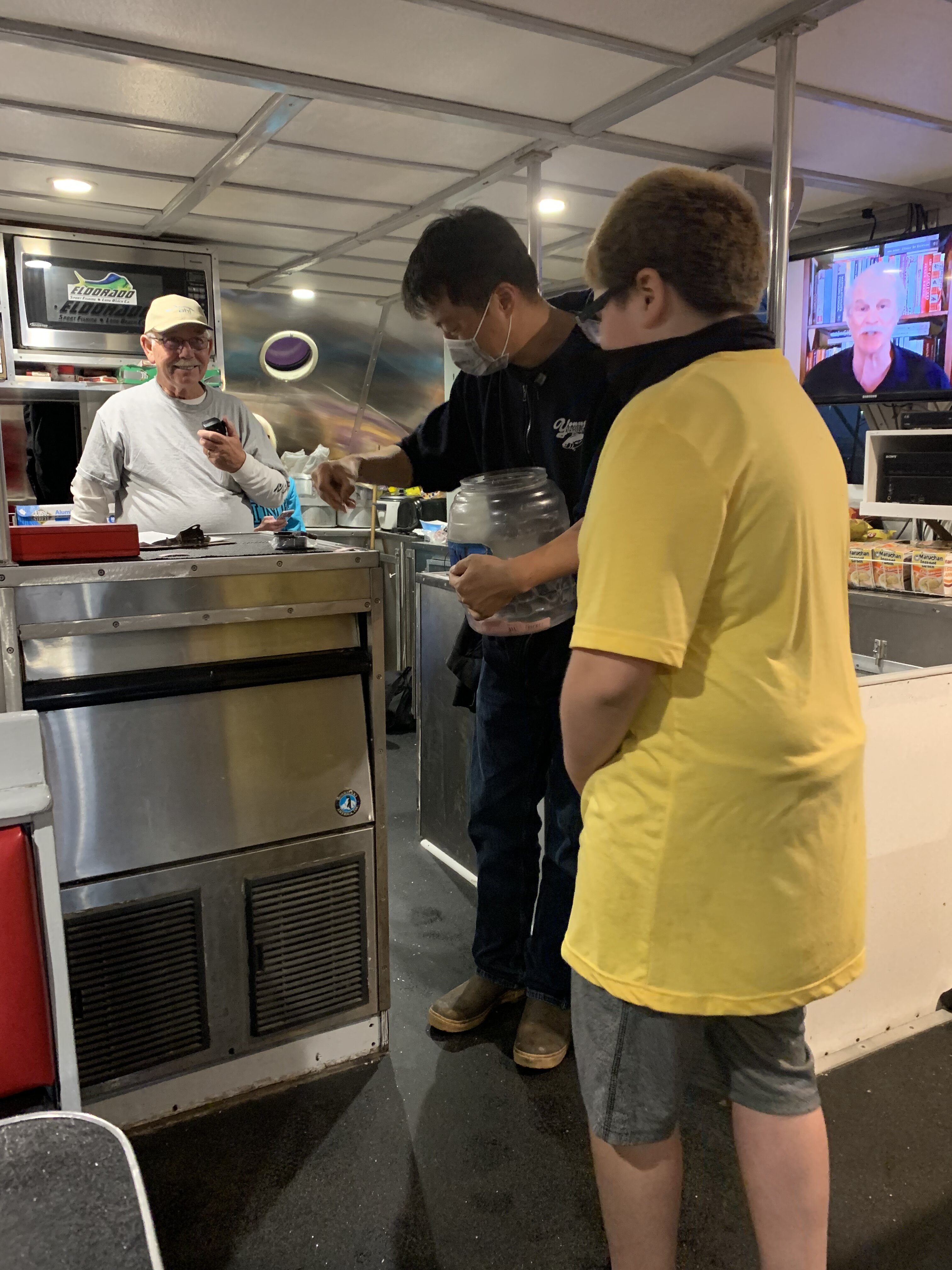 On the plus side, the boat was already loaded with live squid and sardines and we headed off to San Nic swiftly. Outside the harbor, we clocked Captain James doing 14.1 knots and arrived at San Nicolas at 1:45am. For those of you that haven’t visited the island, it’s 60+ nautical miles out from Berth and we used to arrive around 4am before the new engines. No bites until 4:00am or so where we boated 3 yt’s before the bite died down and headed to the whitefish/sheephead spots. Huge whitefish and goats were landed and Jose was the hot hand this trip landing 2 of the 3 YT along with 2 huge goats and a bunch of quality reds. Note: this is prior to the fish sorting as the overage in vermilions pictured here were allocated to the less fortunate. 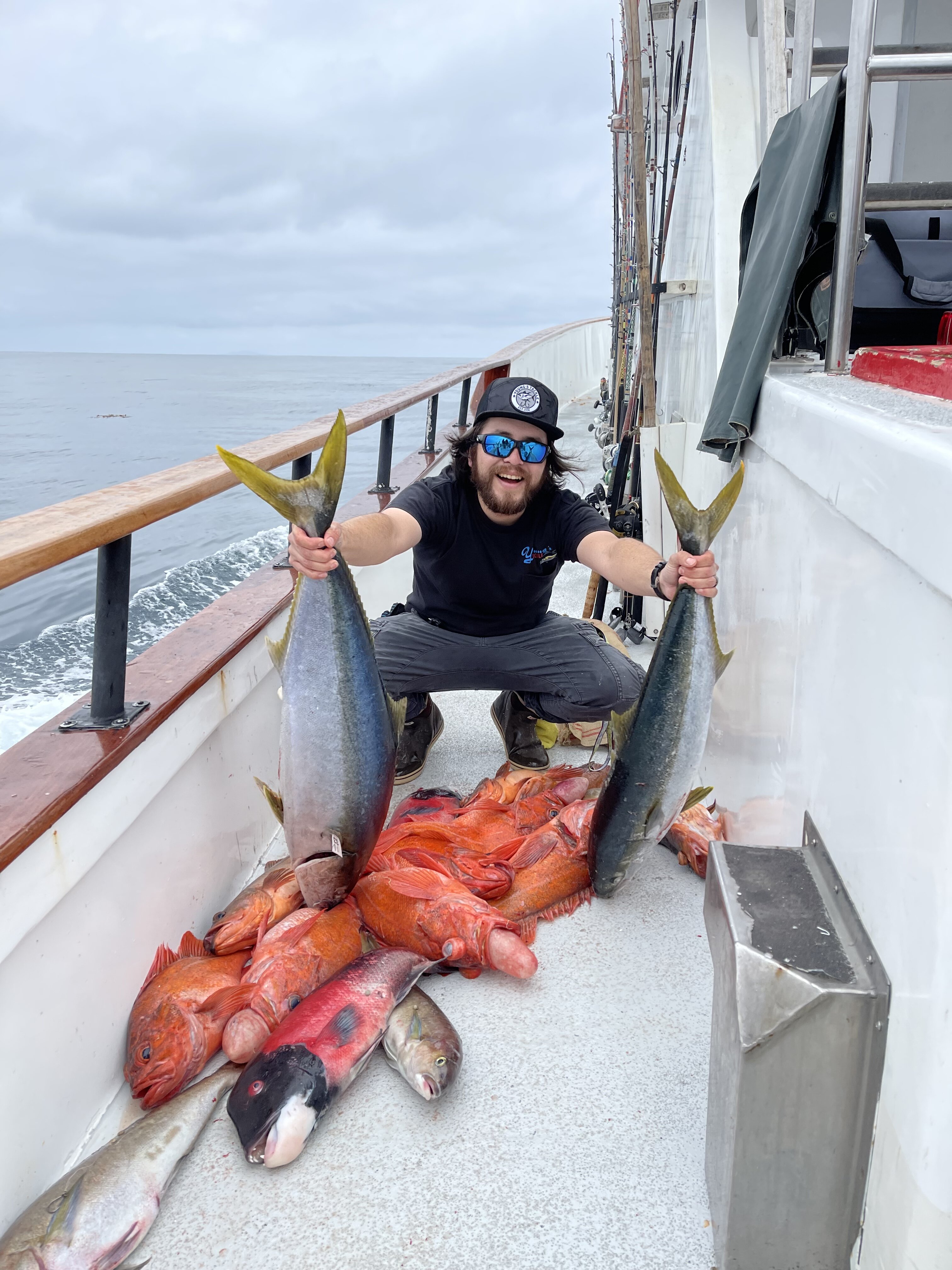 Same drill as always as we fished for quality whitefish and goats then headed out to the big rockfish spot resulting bag limits of reds for everyone. 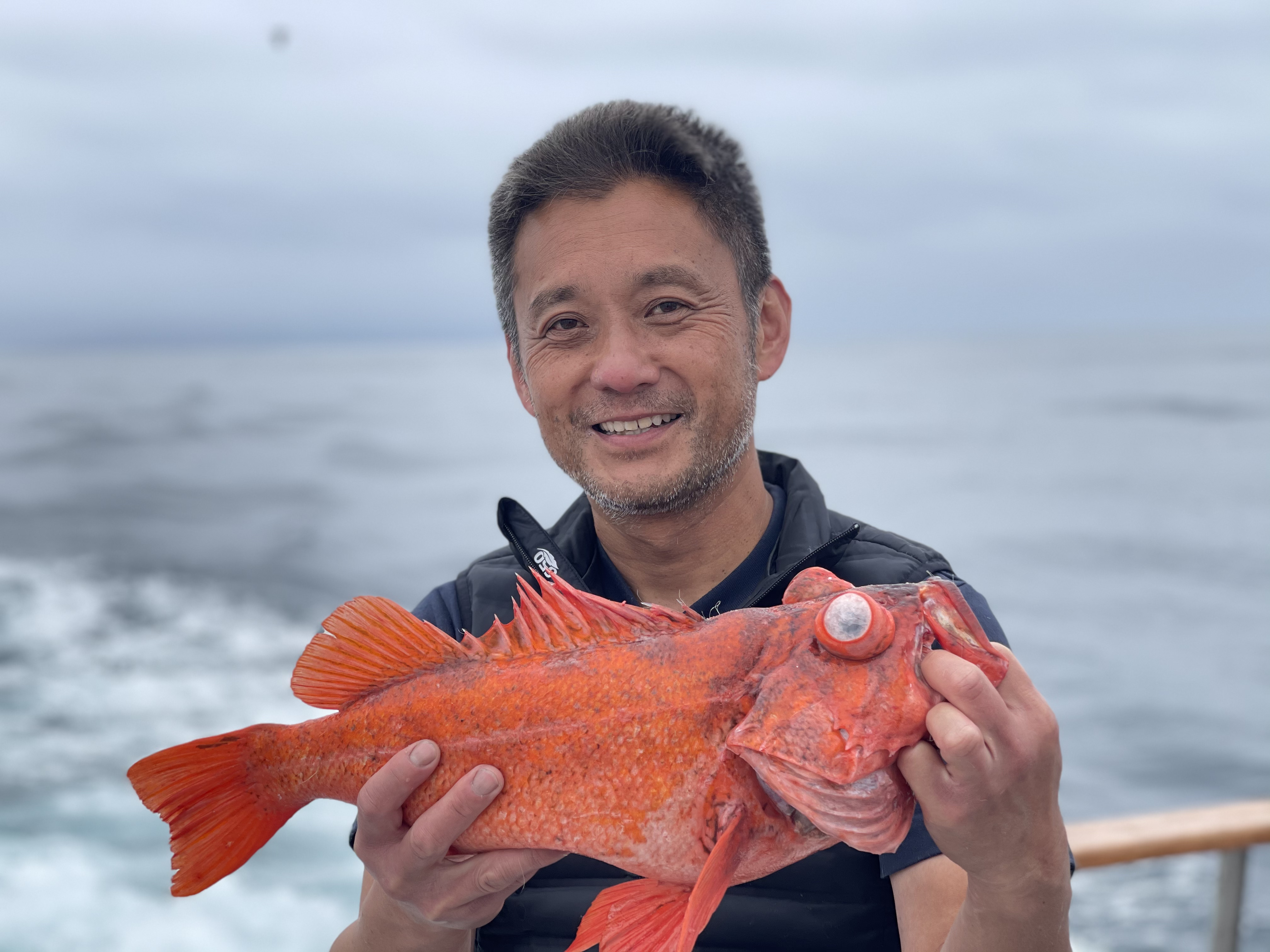 My haul was 5 reds, 1 chuckle, 3 blues, 1 gopher, and 4 whitefish. I managed to hook a big cowcod that got tangled in a braid mess which captain Jeff safely untangled and sent the fish down with a descender with what looked liked 6lbs of lead. The fish never hit the deck and was never handled.

As reported before, the Eldorado is my favorite local boat and Young’s tackle is by far my favorite Tackle shop. If you need something tackle wise, Kevin can get it for you if he doesn’t already have it in stock. If you have questions regarding tackle, Kevin, Mac, Ross and Daniel are all extremely well versed in knowledge and are about the most likeable guys you would ever meet.

It was certainly a pleasure to share the rail with some of the staff and their customers, along with the regulars and the great crew of the Eldorado. What a blast.
Reactions: mhanson59hb, Hey-19, gved823 and 20 others
Upvote 1

GREAT REPORT and Pics and NICE load of tasty fish. Remember lot of fun times on the Eldo with Eddy. Glad you had a fun trip too
Reactions: chilidip
Upvote 0

San Nic is 90 miles no?
SBI is roughly 50-60.
Sorry, just curious on the island you fished as these yellows look hefty abs hungry for squid. I’m all about that!
Reactions: chilidip
Upvote 0

Wasitrytofish said:
San Nic is 90 miles no?
SBI is roughly 50-60.
Sorry, just curious on the island you fished as these yellows look hefty abs hungry for squid. I’m all about that!
Click to expand...

huh, always thought it was a little over 60. Travelmath.com says San Nicolas is 73 nm or 84 miles from Long Beach.. you are correct sir! Damn he hauled ass to get there by 1:45am.
Upvote 0
C

Yep! Super cool guy. Last year I re-did my entire line of Tuna gear.. pretty much all of the Penn 2-speeds I got from him.
Reactions: ysmoose
Upvote 0
Show hidden low quality content
You must log in or register to reply here.

San Nicolas on the Eldorado 4/29