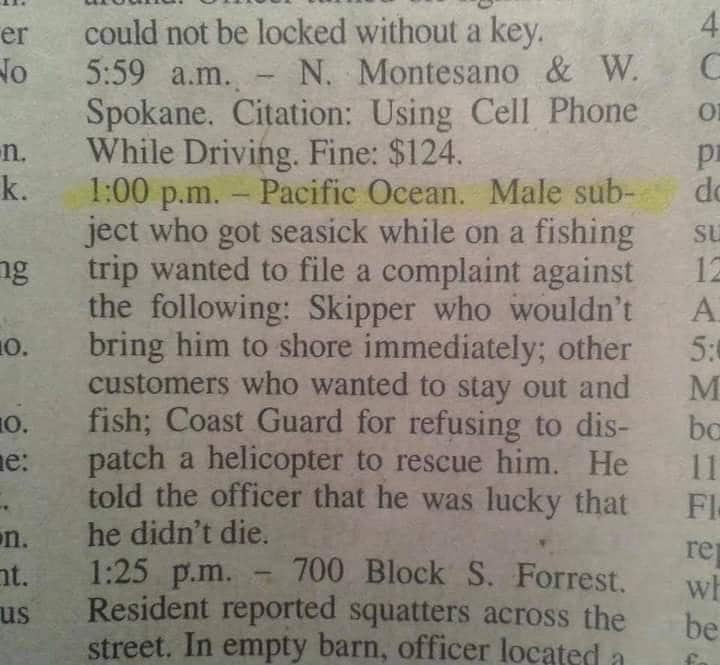 Lol...how, your honor, could he possibly expect to get sea sick on the ocean???

Fucking snowflake
Toggle signature
“It is no crime to be ignorant of economics, which is, after all, a specialized discipline and one that most people consider to be a ‘dismal science.’ But it is totally irresponsible to have a loud and vociferous opinion on economic subjects while remaining in this state of ignorance.” — Murray Rothbard
Reactions: mahi
Upvote 0 Downvote

That skipper obviously didn't know that this guy was entitled to a day on the ocean with no waves or bumps. How could he be so mean and heartless?
Toggle signature
Reactions: stairman and aguachico
Upvote 0 Downvote

One less asshole to ever be on the water again!
Toggle signature
"When beholding the tranquil beauty and brilliancy of the oceans skin, one forgets the tiger heart that pants beneath it; and would not willingly remember that this velvet paw but conceals a remorseless fang." H.M.
Reactions: sickcat, Almud and AWilliams
Upvote 0 Downvote
C

Man, that was my go to for crappy customers who I didn't want to be on the water any longer with... stick them in the trough on the super pitchy deep V, and let nature take her course hahaha
Reactions: Blackfish, soul troller and fishin_kid
Upvote 0 Downvote

Just when you thought you heard it all. Wow.
Toggle signature
Sometimes I wish i was a bird so I could fly over some people, and shit on their head.
Upvote 0 Downvote

That was really funny.
Upvote 0 Downvote

Think he got his money back from the rental rod?
Reactions: woodfish330 and #WHERESTHEKELPPADDY
Upvote 0 Downvote

This is awesome!!
Toggle signature
Of course I know what I’m doing...
Upvote 0 Downvote

kevina said:
If it was a colored person, They probably would of sent 2 helicopters and a few C.G Boats to get him off the boat, Otherwise it would be discrimination and we would probably have more BLM Protest and the boat and everyone else would of been sued. Should I keep adding more to what would of happened!
Click to expand...

Did it feel good to get that off your chest?

BTW, the article says nothing about the man's ethnicity--how do you know he wasn't "colored"? Or was your point that only a white guy would be that much of a stupid, self-centered idiot?
Reactions: Screef, kimbo, C-4 Fishing and 11 others
Upvote 0 Downvote

Everyone gets a trophy.
Upvote 0 Downvote
M

Kevina was quiet for awhile. I thought maybe he got banned. I guess he is back now. I wonder how long he will last this time.
Last edited: Mar 4, 2021
Upvote 0 Downvote
K

mike garrahan said:
Kevina was quiet for awhile. I thought maybe he got banned. I guess he is back now. I wonder how long he will last this time.
Click to expand...

Fucking snowflake owe up to your horseshit. Go beat off with other Qnon members and drink some more cool aid.

God you need to learn what it is to have tact.
Reactions: kimbo
Upvote 0 Downvote

Clearly the seasick person lodging the complaint was not properly prepared. He should have ORDERED calm seas and drank heavily in advance of his fishing trip. Sheesh, greenhorns.
Reactions: cortezpirasea and Omarkayak
Upvote 0 Downvote
M

Well that didn't take long. Kevina's post is gone, I wonder if he is gone too.
Reactions: Juanba and C-4 Fishing
Upvote 0 Downvote

Really....? How to make a this funny post suck?
Reactions: The Right Kind
Upvote 0 Downvote

I was told about a 6
Pac charter years ago, that
There was 5 lawyers and a fat ass judge,
And they all got on board,
And the captain could tell they were
All smashed, and he told them all to go inside, and go to sleep, and don’t
Come out on deck for any reason,
And what ever you do don’t try
Even pissing of the back,
Well a couple of hours into the trip, fat ass
Got up to go, and he didn’t tell anyone,
About 10 minutes later, one of his friends,
Gets up, and they can’t find fat ass
,
So he yells man over board,
And the captain does a 360 and started looking for him ,
And he notified the Coast Guard,
And they ended up finding him
Like a blob ,after they got him back on
Board , they headed back in,
And his friends said he was fine,
And wanted to still go
Fishing, but the captain told them
That the charter was voided
And that was it,
And the coast guard would be
At the dock when they get
Back in, to get a report,
And the lawyer’s said they were going to sue him, for not taking them out.
Priceless.
Reactions: kevina
Upvote 0 Downvote
C

Not the truth... the ramblings of an idiot. Be an idiot elsewhere.

jer dog said:
I was told about a 6
Pac charter years ago, that
There was 5 lawyers and a fat ass judge,
Click to expand...

That was a book writen a few years ago. Dude and hot wife run charters and get hijacked to Mexico.

What was the name.....
Upvote 0 Downvote

Hey, I posted this in the
Nonsense Anything Boards

How did it wind up in the
Politics Board
Upvote 0 Downvote
Show hidden low quality content
You must log in or register to reply here.

Which day belt for upgrade?

When you need Helium call me