Rolled into town midday Thursday with most of my crew for the weekend. IA/MT/Pittsburg Dave, TheWoman, two boys from ACI (1 only fished Friday), and Landshark. Kiley would be down late Friday night, after finishing up with the big sale at Sportco. Had some of the typical pre-fishing set up to take care of: cleaning the boat, organizing terminal gear, tying on new leaders. We have 31 rod holders up top and we filled them all. Got all that work out of the way and headed over to the home of our favorite locals, Carrie and Norm. The walk over was a little tough for me, as I looked at my phone and it was literally within minutes of two years ago when I got the call that they found dad's boat. I was glad I was with my second family!

Looked like 1/2 the damn town and all of the WTC folks were at their shin dig. Had a few drinks, some awesome grub (including a killer dessert from Limey - never woulda guessed he was so domesticated), and a crapload of fun! We had an early morning and long day ahead, so we turned in early.

Got out there and found some good looking water. Winds calmed as the day progressed. We trolled, trolled, and trolled. Ran out some, ran in some, and even ran down even with WP. Saw 1 troller working a line, so we got in behind him and rained bait on some birds. They flew away.... 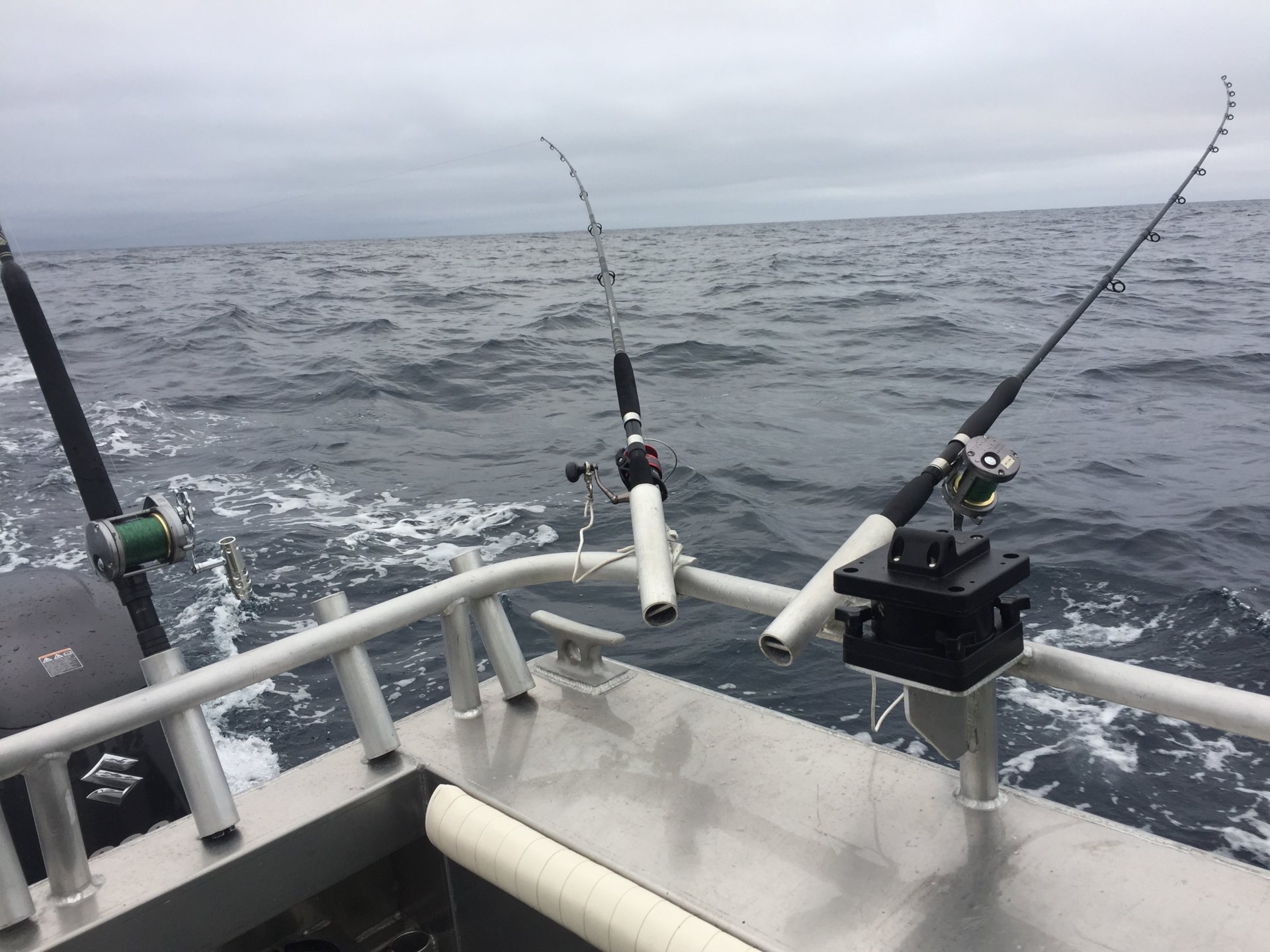 Saw a few marks here and there, but no love. About 1:00, we made the call to bag it and head to the barn. I let Dave have a bag and took the wheel. It was nice and calm and we crossed the bar doing 40 mph. We knew we'd be heading south Saturday

We chatted with a few friends and over dinner we agreed to make a long ass run to chase bluefin in SoCal. Made sure the boat was fully topped off and had Kiley grab a couple Jerry cans for some safety fuel (didn't come close to needing it, but I play it safe). At the boat by 0430 and grabbed 3 scoops of less than par bait while waiting for 5am and our guest Warrior to arrive. The bait wasn't the worst, but It survived the run out (Thanks for the tank Goatram). I forgot how dark 430 was. We were Team 38 (Team Raymarine), and we used every bit of Raymarine we had on the boat. The new FLIR didn't make it in time, so it was certainly a radar show. The release seemed to go very well. Only heard of 1 boat running forward lights, but another captain squared that away immediately. We had no issue making our way past the boats ahead and right out through the south gap. It was probably the second nicest day this summer. I think we ran 230° for a few days, doing 30-38 mph, while making sure to keep my burn rate as close to 1 mph as possible. Wasn't sure how much trolling we'd do, but knew we had at least a 180+ miles ahead of us. The boat holds 250 gallons (plus 20 Kiley brought). It was almost like silk Saturday and I'm sure every boat was as smooth as we were. About 20 minutes from our X, we come upon this guy with a pair of 300 Verados ha gong on the stern, and we all knew we made the right call 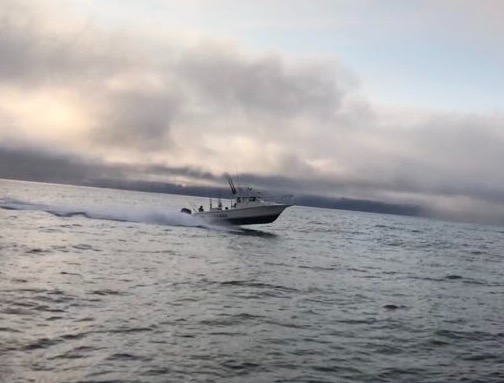 There was about 20 minutes of boredom (we call it trolling) and a swimbait got hammered. We got back on troll and ran in and out of fog, more boredom. Got a couple miles from our starting point, so we decided to head back to it. We didn't make it. A dink tuner tried to kill one of the zucchini 7 strands Dave had in our spread. We made it rain with bait, dropped iron, and soaked livies. Shit... just a single????? Called for lines in and 20 seconds later, Dave's LONG soak turns into a FRESH ONE. Chum goes back out and HOLY CRAP. I've never had my electronics dialed in well enough to ever see anything like this!!!! Killing got real and real fast. Our Warrior (Matt) was a damn machine. We nick-named him "Grinder", because for the next hour plus, he was pretty much cranking on fish non stop. Apparently, we wore him out

Oh yeah, this was after he ate the heart. (Video to come). We had a mess! A hot mess. The jokes... well, I might have to mute our entire videos... About 1 pm we were out of ice and the aft holds were almost plugged with about 35 fish. This was when we wished we would have added ice to the bow holds. But, we decided to pass in order to keep weight down and watch our fuel

. We coulda thrown another 30 fish on with more ice!!

Folks, Shimano supports our fishing. I got lucky and had several manufacturers I could choose from to sponsor us. I'm still paying for gear, so don't think I get anything free (not full retail either though). I've had craploads of Shimano gear prior to this boat and their systems are affordable to most of us. But regardless of all that, their damn flat falls and flat sides kill fish. Having light weight rods and super light reels, like the new Tranx makes it easier to put the time in jigging and learning the different rhythms the fish like. Several of our fish came from a 20-30 second count while dropping jigs. And, those deeper fish tended to be bigger. It's happened for several trips (including in years past) and not just for this boat. Pretty sure the Lil Todd got it done on deep jigs Saturday too.

Anyway, we got things cleaned up and made the run home pushing 35-40 mph the entire way. Even though the breeze picked up some, the Lumacat just ate up what little wind chop there was.

We were back and fueling up by 4pm. Manwhile, the rest of the crew put the scale to our fish to find the top 5. In the end, we all felt... We put 189 gallons back in the Lumacat. Pretty damn good considering we had 90 miles runs out and back and trolling in between. Plus, doing 30-40 mph all the way.

These things never run perfectly smooth and many of us forget that the ones making it happen are all volunteers and have full time lives outside the WTC. My ass certainly isn't stepping up to take any load off of their shoulders, so I am VERY APPRECIATIVE of their personal investment in helping the community, our vets, and showing the positive side of fishing, especially for Westport. I'm proud that we all come together to donate fish to the food bank, provide cash for the charities, and that many of us dig a little deeper and offer 1-6 seats to our Wounded Heros! This was my first time with a Warrior on the boat and I owe a big thanks to ACI for letting it happen! Matt kicked ass and as a total tuna rookie, he was better than a shitload of the other rookies I've had out! And he didn't leave until the boat was clean! Hell of a man!

After we got skunked at the WTC two years ago, my brother called dad and gave him the news. Dad said "you'll get 'em next year". Obviously we didn't fish last year. But this year, and again because of Cory Armstrong and ACI Boats asking me to run their boat, I was back and wanting to fish, We ended 3rd in the standings and have the big fish trophy too

This flat fall and a purple flat side were lethal! And knowing that we have 1-2 4/0 hooks embedded into the fish makes soooo much fun to just crank the drag and break these fish! I give my sincerest thanks to all the cops that protect us from criminals
Reactions: Corey G, Gamagotme, Grady226 and 16 others

And that is how it's done!
Well done!
Expand signature

God put me on this planet to keep the worlds fish population in check, bitches!!!

Well done! Can't believe you ran 90 miles. Needs to be a new WTC category, farthest distance run in a day.

Very good write up Laurence- good intel too. Congratulations to your crew.

Wish you'd drag some of those about 40 miles closer...... these old bones aren't up for 80 miles and 30+ speeds- though the water did look reasonable Saturday

G
Expand signature
Save Fishing for our Grandkids, and Theirs 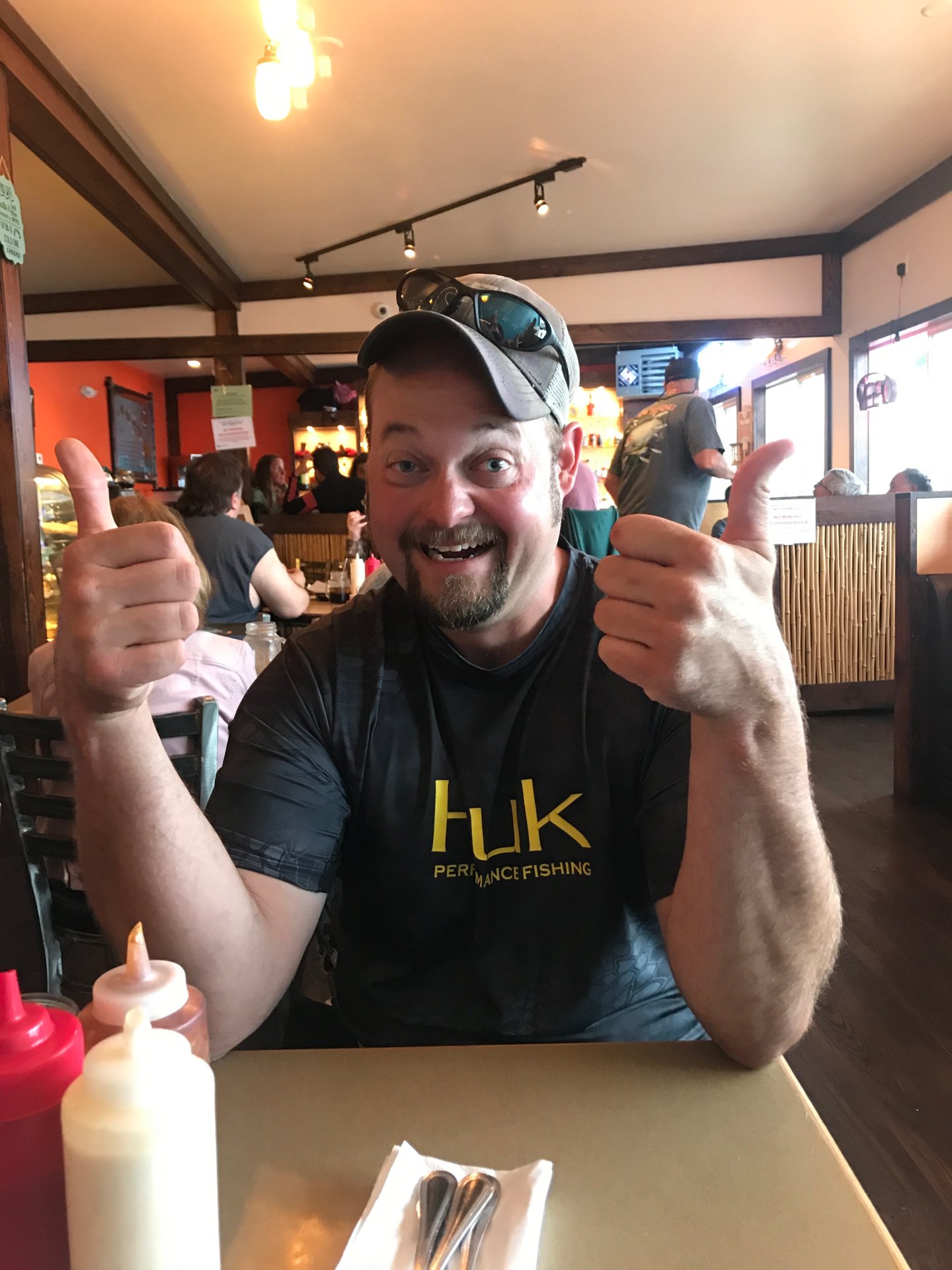 Sums up a great Team.......
Expand signature
Nowhere in your incoherent rambling did you come close to what can be considered a rational thought. Everyone is now dumber having heard it. I award you no points and may God have mercy on your soul.
Reactions: spoon man

Nice report congrat to all

Thanks again for asking me to be part of it you guys! It's been a really good time.
Expand signature
Life is Good!

With all the fish you guys brought in, it's amazing you had time to take pictures. Great report!!! It's like reliving the adventure. You nailed it!!!
31 rod holders? What is that, about 1-1/2 fish per rod? Dynamite day for your crew. Thanks for the treatise on a most important day for all of our WWs.

"No, we're not catching"

Boat
Looking for a Delta

Nice work, nice boat...
Expand signature
If you cork my baitstop, then be prepared for 6 oz. of lead through your wheelhouse window

Waterdog~ said:
Way to get after it lumiCat team......

Foul... This picture was taken Friday night BEFORE all the tuna mayhem. Nelly and I are talking in the background, though I am obscured by a thumb...

Awesome job, though. Nice to see Lumacat all bloody!
S

Fish_kid said:
Foul... This picture was taken Friday night BEFORE all the tuna mayhem. Nelly and I are talking in the background, though I am obscured by a thumb...

Awesome job, though. Nice to see Lumacat all bloody!
Click to expand...

Haaaaa. I said that's what we felt like in the end. Not, this picture was taken after the mayhem.

Boat
Prowling for a Cat

Thanks for posting the pictures and writeup.

You guys did a GREAT JOB.

WD.
Expand signature
If sport fisherman unite, and act as one when we vote, we can achieve anything politically we will ever want, our numbers are to great to ignore.

Fish_kid said:
Foul... This picture was taken Friday night BEFORE all the tuna mayhem. Nelly and I are talking in the background, though I am obscured by a thumb...

Awesome job, though. Nice to see Lumacat all bloody!
Click to expand...

No Blood no foul......
Expand signature
Nowhere in your incoherent rambling did you come close to what can be considered a rational thought. Everyone is now dumber having heard it. I award you no points and may God have mercy on your soul.

Great write up Laurence and congrats on the wins!

You've got some serious bird control on top of that boat, won't get one landing up there.
Great report that has me itching to get out

Sheppard of the sea

Can you sell me that boat or how's that work? I need it
Reactions: Grady226 and goatram

Nice to read thru this report again.
Expand signature
Save Fishing for our Grandkids, and Theirs