Why Tuna hang with porpoise

Got a question for all you tuna hunters. Me and my good friend was discussing why tuna hang with porpoise and we came to a conclusion to ask da boyz on bloddy decks what they think.

Porpoise use sonar to locate bait schools. Tuna follow porpoise to make finding a meal easier.
Toggle signature
Why be average when with a little extra effort you can be exceptional...
Upvote 0

last time I asked them, this is what they told me.

"we are lazy. we know that the porpoise need to eat alot more than us, they are warm blooded, ya know. So, when we see the porpoise, we know that if we can keep up with them, they will show us the way to a meal. The porpoise crowd the bait from above, we slam 'um from below."

Interestingly enough, tuna will also follow whales...
Toggle signature
Why be average when with a little extra effort you can be exceptional...
Upvote 0


See above. this is the story I have always heard.
Upvote 0

They like to eat whale poop too.
Toggle signature
Join The San Diego Marlin Club Today. Preserve Our Angling History and Future. Since 1931.
Upvote 0
G

same way that Iwa (aka Frigate) birds are known to track big(ger) fish and not just $hit-small bait like alot of other birds - they have been doing it for a long time and it works more than it doesn't...I agree w/the opinions above re following the smarter, higher-skilled hunters to the food...

Somewhere between San Diego and Yelapa

Tuna also follow the scallop trawlers on the east coast because, wait for it... they eat trawler poop too...

.
Toggle signature
Why be average when with a little extra effort you can be exceptional...
Upvote 0

Dolphin Sonar reaches far, far farther than any fish sense. It is far more sensitive than Tuna lateral lines, vision or sense of smell. They can detect bait schools from many miles away. Whales as well find schools of bait with sound and the tuna follow them too.

The Dolfinas find the bait (and as above, must find more meals than fish to survive due to their higher rates of metabolism) and the Tuna know that where they are, that's the likeliest spot to find a meal.
Toggle signature 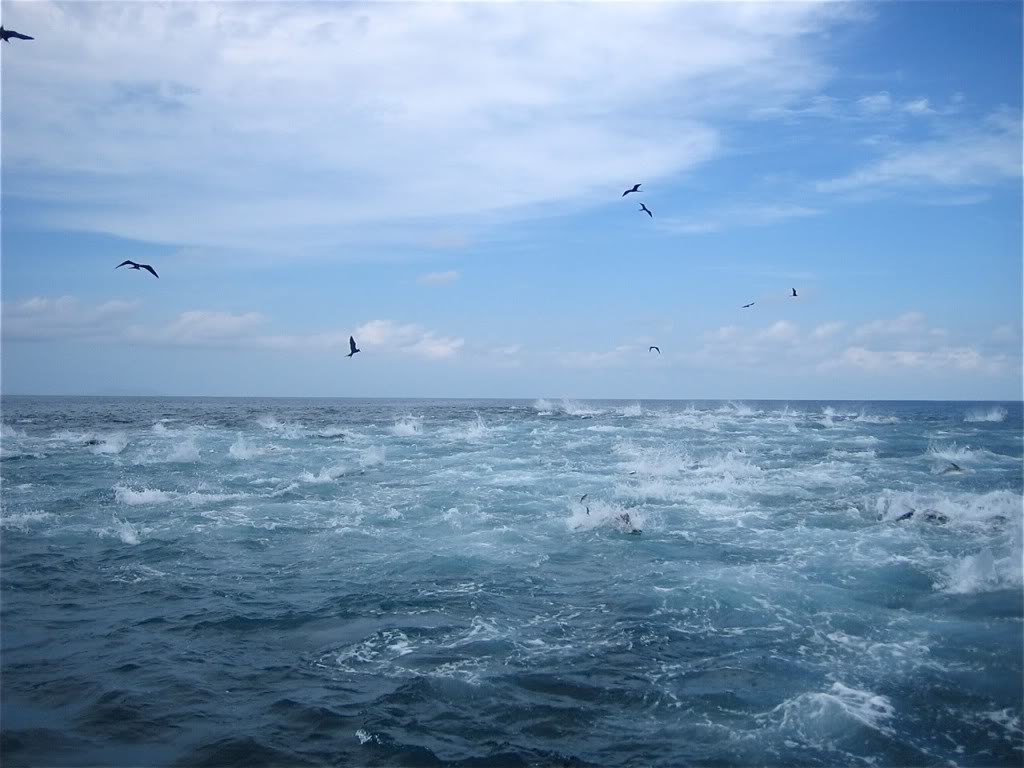 So easy a 5yo can do it: http://www.youtube.com/watch?v=3w7jCUqSPeQ
Upvote 0
J

Antares said:
So if all tuna eat is poop why do they taste so good
Click to expand...

I have learned since being in florida that you can tell what kind of fish a frigit bird is following by looking at the way the bird is acting.
Toggle signature
http://whackandstack.blogspot.com/
"Sorry I don't speak faggot so you could understand."
-Jason
"Will do. I may have to look into the possibility of a brick duck-blind. I can probably modify a set of shit-house plans." -Widgeon
Upvote 0

Dolphins are actually able to monitor Fishdope. They used to just wander aimlessly and hungry.
Upvote 0

I'm with JohnD, Grander, Ali, and Mikeytalkswithdolphins...the dolphins are far more intelligent and possess far superior bait sensing and locating abilities than the tunas, so the tunas follow them for that reason.

I've looked in at a helluva lot of tuna stomach contents, but have never found a dolphin turd in one? 'Course, I gotta admit, I don't know what a tuna turd looks like, so ya never know!

Reb and Rubberhook are right too, the tunas do follow whales. Reason being, they feed on the very same "whale food" as the big guys...red crabs, shrimp, immature squid, octopi, cuttlefish, small fin bait.

According to a lot of the research I've done on stuff like this, this dolphin/tuna relationship thing is primarily found in various areas of the Pacific and not so much elsewhere.

As we used to say down in Mexico, "Coachies y atun estan hermanos del mar".
Upvote 0

yeah come to think of it, many a time after giving the old marine head a workout, press flush, hear the macerator whirrrrrr....and then ... whamoooo, zzzzzzzzzzzzzz fish on....

Is it possible that they work together? The porpoise find the food and the Tuna help chase it to the surface. Then the porpoise chase the tuna away after we show up to pick a couple off. They have an interest in protecting their resource. Thoughts?
Upvote 0

Boat
Don't have one yet!

grander007 said:
yeah come to think of it, many a time after giving the old marine head a workout, press flush, hear the macerator whirrrrrr....and then ... whamoooo, zzzzzzzzzzzzzz fish on....

There could be many benefits just as plains mammals stick together.
Toggle signature
God is great, beer is good, and people are crazy.
Upvote 0
A

Yup,allen that is secret to catching tuna's!!!!so next time I see you in the porpoise pile you better hang your ass off the swimstep and wait for the 4 banger!!!works better after a hard night of drinking
Upvote 0

Antares said:
So if all tuna eat is poop why do they taste so good
Click to expand...

Offshore My best season in 65 years