Just landed this morning from my 1.5 day trip on the Legend out of H&M landing. And what a trip. Great captain, great crew and limits of tuna for everyone!

We left around 8 and after a quick stop by the fuel dock and bait barge were on our way. We got some of the best looking bait I've seen all season. Perfect, cured 5-7" dines. Sweet.

I was up at the crack of 5am. I had a feeling this was going to be a good trip. No wind, but decent sized rollers. We started trolling with no hits for an hour or so. We got called into a big school of tuna by the Seeker. They had limited out on the school I believe, so thanks for the hand off

. We got a few on that stop(21) but with 30 anglers on board, that just wouldn't do. So off on the troll again...for NADA. I can't believe not a single jig strike all day.

We trolled and trolled and hit paddy after paddy with no one home. People were starting to get bummed, but I just kept saying you never know. The last stop of the day can be a total trip changer.

AND BOY WAS IT!! At about 6pm the whole trip changed. You could hear the excitement in the captains voice over the pa, "Here they are!! There's tune everywhere!!" The next hour was a blur of blood, fish, screaming drags and insane WFO fishing. And I mean WIDE F**KING OPEN. I've been on 7, 1.5 day trips this season. And that was my first WFO trip. Everything that hit the water was instantly devoured by a tuna. At one point the captain stood right next to me and said "watch this". He literally kept his reel in gear, and in one motion dipped the bait into the water and instantly bounced over a YFT!! I couldn't believe what I had just seen. What a savage! The tuna were all in the 10-15 lb range, but still an absolute blast to catch.

The whole boat limited out on that stop and there were nothing but smiles from everyone for the whole rest of the night.

A big thank you to the captain and crew for putting in the work to get us on the fish. I'll be on this boat again next season for sure. 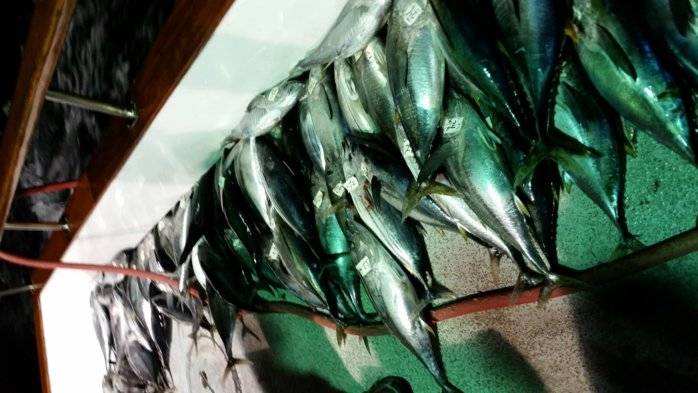 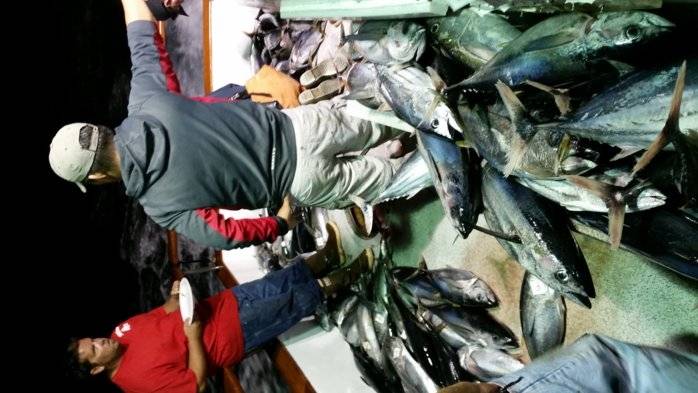 Great job. I love a capt that works till the end! Looks like the years not over yet! What was the area of your last stop? Thanks
Upvote 0

alglaser said:
Great job. I love a capt that works till the end! Looks like the years not over yet! What was the area of your last stop? Thanks
Click to expand...

I am definitely a lucky dude.
Heres how i fish a lot - no girl/wife, no kids, no student loans, no car payment

I dumped my girlfriend and had an extra $500-600 a month somehow. Made it reel easy to go fishing more

Good Job. Do you have an idea of the general area where you guys landed the tuna? Heading out tonight.
Upvote 0

I have another one scheduled on the 19th
Upvote 0

Fishing is an incurable disease

Boat
Big ones with hot burgers and cold drinks

Congrats on a great trip!

Ya Mexico or US limits? That should give everyone a good idea.
Toggle signature
Check your drags!

I caught limits on 4 trips, but never hit a WFO bite. Got 4-8 fish on the other trips. Including the #68 bluefin in my avatar. And I got to take my Dad on that bluefin trip, which made it that much better. I've had a great season, zero complaints here. Any day on the water is a good day
Reactions: Jigslinger
Upvote 0

Sounds like a good trip. I'm on the Aztec fishing Friday. Hopefully we can find um.
Reactions: JTL750
Upvote 0

JTL750 said:
I am definitely a lucky dude.
Heres how i fish a lot - no girl/wife, no kids, no student loans, no car payment

I dumped my girlfriend and had an extra $500-600 a month somehow. Made it reel easy to go fishing more

Nice load of fish, glad you got some of this action. Now my neck has a kink in it.