I've been fortunate to make the LONG RUN to the Tanner several times in the last week.

Fishing for the big bluefin has been off the charts!

Rather than post several reports, here's what's been working for us.

1. Dead flyers. Still the go to bait for most out there. We can't thank G-FLY enough for keeping all of us baited up with these great baits. A buddy brought another brand of bait on the boat the other day and they were soft and mushy. Never again. We have changed up the way we rig them recently and I'm really liking the new rig. Here's a video the team shot with Dan from Pinnacle sportfishing. This is essentially what we are doing: 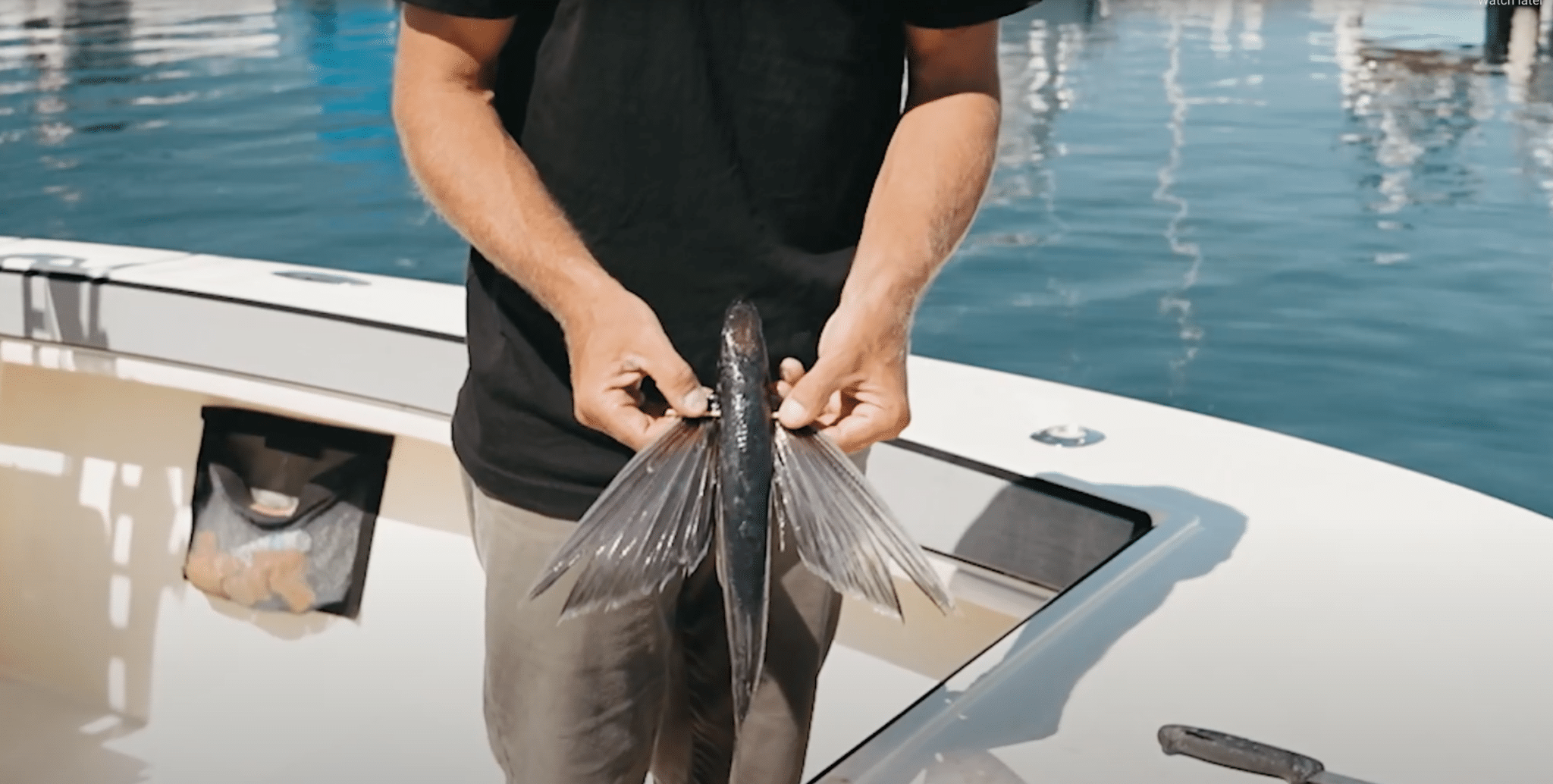 Dan Funke works as a deckhand for one of the most reputable four-pack charters in San Diego, PINNACLE SPORTFISHING. Their success rate is astonishing and puts them way outside of the parameters of being lucky. For the last several years Southern California has been blessed to have a continual...

Why the change? We found that rigging the wings half-open or "delta formation" makes the bait roll back over, right side up much quicker than with the wings fully spread. We have also shortened up our treble hook rig length so there is no "slack" in the treble hook lead. This keeps the bait flying more horizontal rather than hanging up and down.

Little tweaks like this can make a big impact on your catching.

2. CA Flyer - It seems somedays the fish want this thing more than a dead bait - The lure definitely seems to get bit better at 4-5 kts than just hanging off the kite or walking it with the kite reel. I think when it's not moving relatively quickly, the fish smell it and turn off without biting.

3. Leaving the earlier - In years past, these fish really bit better in the late afternoon. For the last month that hasn't been the case. They have been biting all AM with a lull in between tides and then again in the early afternoon. Sundown bites haven't been the rule like they normally are but we did hang one in the dark last trip. I'd try to be on the grounds before 9am if possible. Also less boat traffic.

As always please try to be courteous to others out there. There are more boats fishing that zone than I have ever seen. If you are dragging spreader bars, PLEASE try to stay at least 200 yards from other boats with kites out. I can't tell you how many times we have tried to drop a bait in a breezer school only to have someone run the school over becuase they can't recognize a breezer or dont care.

Try sneaking off to the edges of the fleet (.5 to 5 miles) and you will be rewarded with much less spooky fish and more bites.

Here are some pictures so you guys will think I'm cool.

Good luck out there. 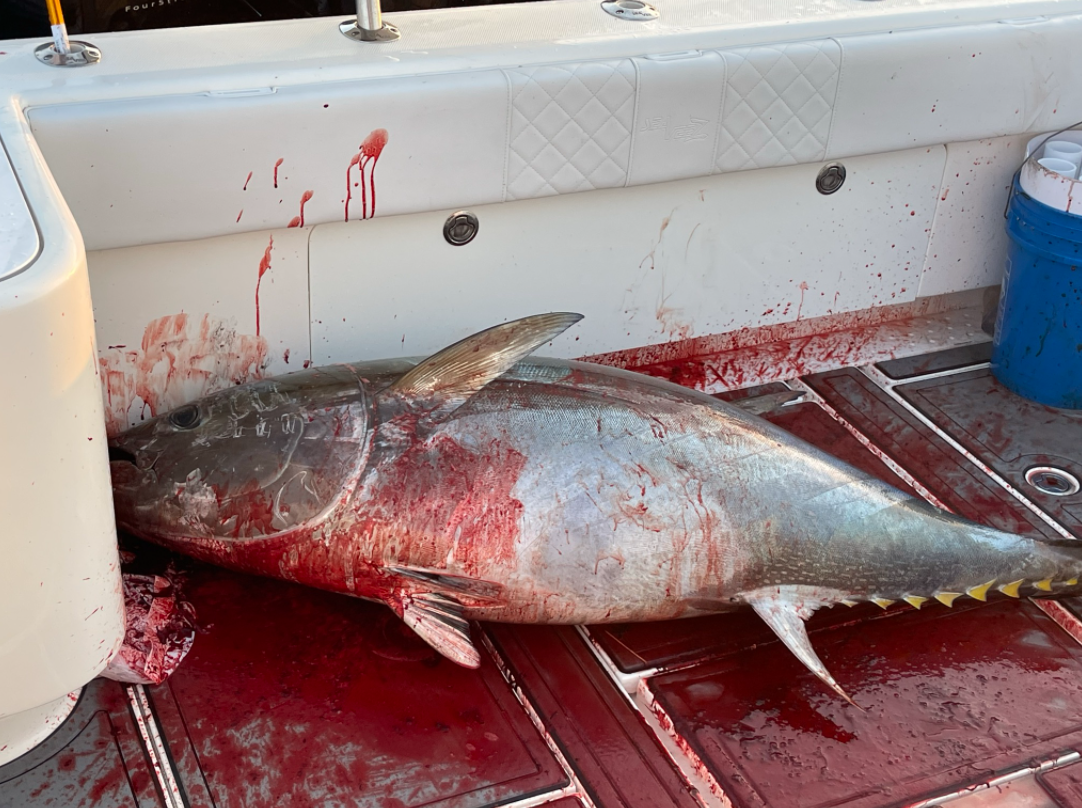 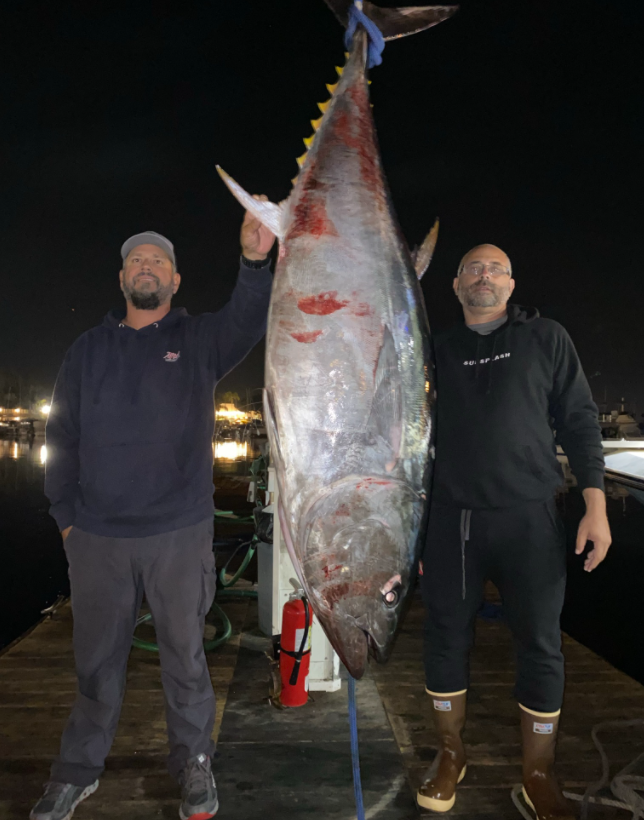 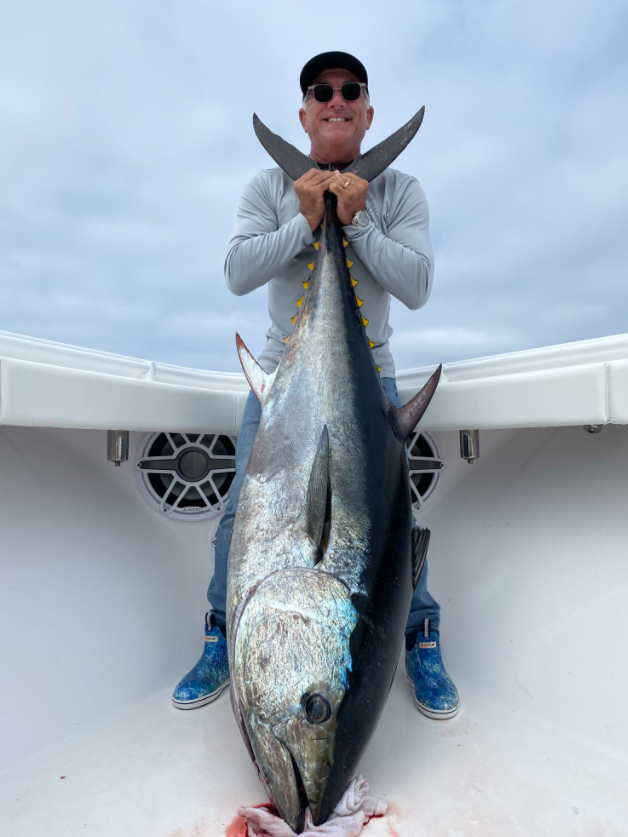 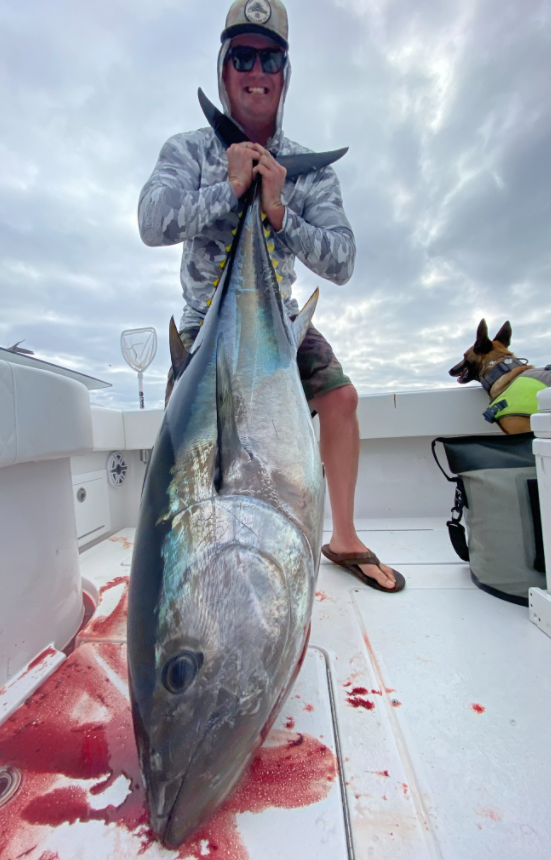 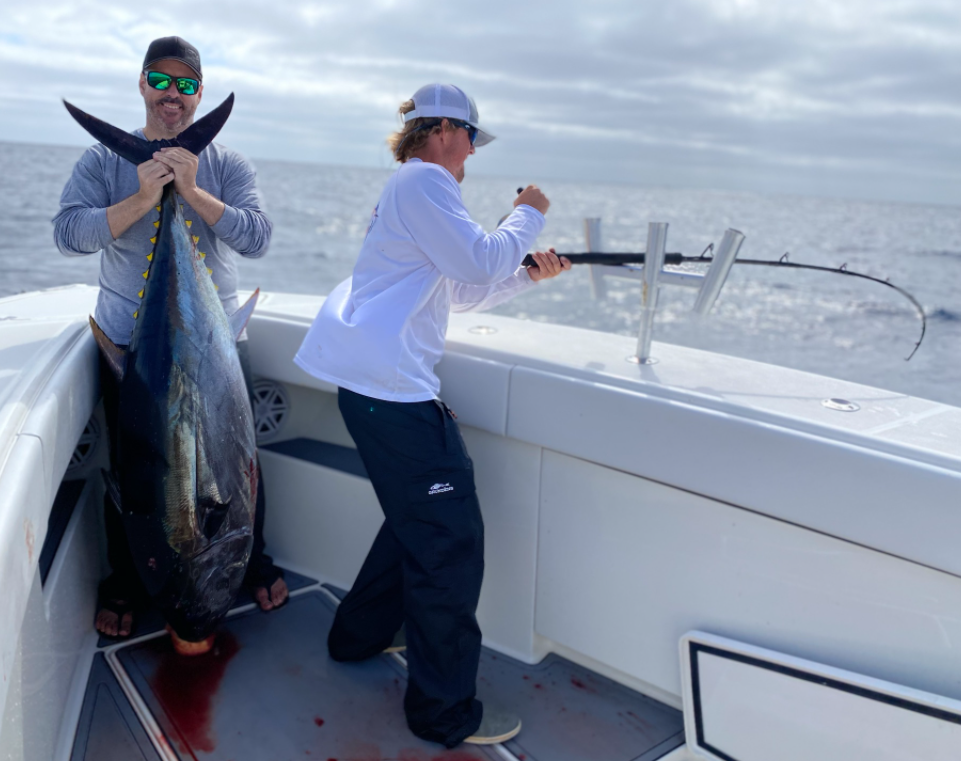 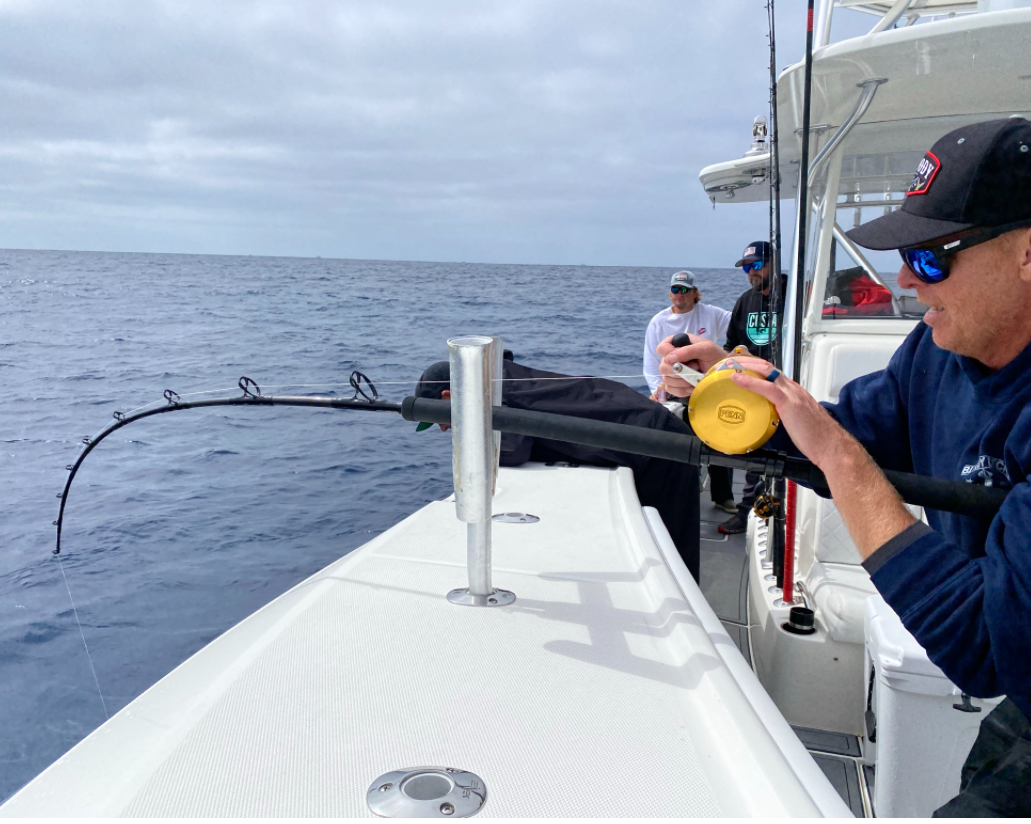 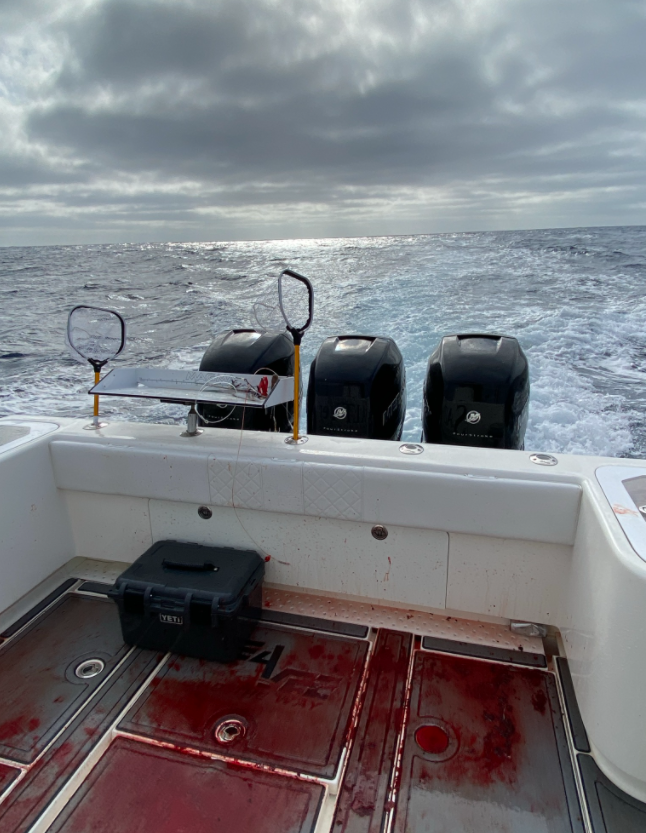 You are very good
Reactions: Lucky B
Upvote -1

You guys are straight-up killin it!
Thanks for sharing all the intel.
Toggle signature
"Life's journey is not to arrive at the grave safely in a well preserved body but rather to skid in sideways, totally used-up and worn-out shouting Man what a ride!" George Carlin
Reactions: Tuna Dreamer and locvetter
Upvote 0

Glad to see Jeff getting in on the action.
Reactions: Preempt and Tuna Dreamer
Upvote 0

Since I can’t really get my 170 whaler out there, how about a lift?

We don't need pics to know you're so cool!
Reactions: Tuna Dreamer
Upvote 0

Doesn’t matter what we think, you are cool

thanks for the report
Reactions: Tuna Dreamer
Upvote 0

Nice pics. Thanks for the pics and report.
Toggle signature
-AH
I get skunked and I can not lie
Reactions: Tuna Dreamer
Upvote 0

A triple! You can get there way before 9 am
Reactions: Tuna Dreamer
Upvote -1

Wow, that’s freaking awesome, catching one of this fish would be a bucket list for some of us, great info on the rigging. Thanks!!!
Reactions: Tuna Dreamer
Upvote 0

Nice Catch Thanks for the intel
Upvote 0
P

The night bite was the deal for us last week. Knife jigs. Incredible volume and grade of fish, but not sure it’s possible with a skiff. Our skipper dropped us on the big boys, sonar told the story, and we whacked ‘em.
Reactions: Tuna Dreamer
Upvote 0

I guess that’s cool, if you’re in the that sort of thing.

I give my sincerest thanks to all the cops that protect us from criminals
Reactions: Omarkayak and Tuna Dreamer
Upvote 0

Ali awesome job! I'm going to have to run out with Grant to get one! Can't wait to run that Castigo with its new twin power house's!


gettingbentwithbo said:
I have got to get one of these fish...
just one that's all I ask!
Click to expand...

Yes me to! Yet one of my 6 carbortarors are clogged

After fueling up double checking my rigs buying more gear and spending to much on getting ready. Turn key andddddd pop. Clogged carbourator. So I've got to know clean all 6

The lengths we go! The price we pay..
Upvote 0

Maybe to cool?
Cancel this guy out of jealousy and claim I'm a victim?
Toggle signature
Lurkmeister
Upvote 0

Ali,
Already knew you were cool. Thank you for the info. Much appreciated.
Reactions: Tuna Dreamer
Upvote 0

I can’t wait to get back down to San Diego! This gets my blood pumping!
Upvote 0
Show hidden low quality content
You must log in or register to reply here.