Offshore WARNING DO NOT DO THIS AT HOME

WARNING DO NOT TRY THIS AT HOME

Was thinking of calling this post, “Let’s Talk Hookup” but somebody might take offense so I chose the above.

Last Sunday, I had Big John at Richard’s Tackle upgrade my Lucanus #1 live bait hooks to 3/0 3X assist hooks. Later at night, I was organizing my lures, bumped the Lucanus off the table and my reflex was to catch it as it dropped. Well, I can say without a doubt these hooks work well. Please see attached picture for evidence based proof For a moment I thought I was Bruce Lee reincarnated until I realized I didn’t catch the lure. It caught me…Prior to this I was thinking about investing time and testing these hooks under different water and structure conditions.
Pretty sure now they are not worth Testing again because I know the bill from the Emergency room will verify I’ve invested plenty enough. Stock traders say, “don’t catch a falling knife”.
I recommend us fisherman say, “Don't catch a dropping or falling lure”, especially one with hooks on it. And most importantly when at home, don't try to catch it when you have a carpeted floor like me…

So still in a state of disbelief and more surprise than shock, and if you googled “stupid” it would’ve probably shown my face on Sunday. I call my retired doc fishing buddy and we’re face timing for a remedy. After 5 minutes of discussing fruitless options; driving to him 20 minutes away for removal, youtubing braid pull technique, pulling or pushing…he advises I visit the ER. I cut the braided line off the Lucanus, freed with just the hook in my finger now as per Frank’s advice, gather my keys and let the wifey know I’m going out to get unhooked. Luckily she was already half asleep in bed with her laptop in screen saver mode.


The Emergency room was hectic but under control. The 15 ICU rooms were all occupied by C19 patients (most on ventilators) and the designated 40 room ward for C19 positives was unfilled but ready awaiting test results for 15+ people showing signs. There were some seriously sick people; one girl carried in appeared epileptic, lady with possibly kidney stones, many heads were bowed, ambulance with fire truck escort rushed someone through...no visitors were allowed. This was a difficult task for the security guards to enforce against fearful and frantic family and friends. I did what I could, I prayed.
Mask on, I got there just before 11PM and was home by 1AM. Fortunately one of the ER doctors at the hospital is a close family friend (his wife and my wife are best friends). He was in and out of surgery that night but still took the time to call and tell me to go in. He didn't see me at all but somehow every health worker I met knew he was a friend and he was monitoring my care. I learned later that he doesn’t do hand surgery but if it was my esophagus or... The doctor numbed my finger in 3 spots and tried to push the hook through but couldn't because she didn't want to cause me any pain. I was going to volunteer to do it myself but didn’t want to cross that responsibility line and offend her. Plus she’s a member of our tribe, yellowtail catching fishergirl that was on the water just a week ago with brother and kids. She opened up a hole or cut the side and the hook slid out, then stitched me up. I didn't watch because I didn't want her to be nervous. As an extra precaution volunteered for a Tetanus shot as strongly advised. Earlier one of the docs passed by my room, saw my finger and said I'm sure in a bit of frustration, “we’re pulling out a hook ". I felt bad that I had to go in but I figured if my son snapped it out with braid or if I pulled it through myself it would've turned into a disaster...I have German cutters (NWS/IRWIN Lever Side cutter) that cut through heavy duty hooks like snapping a twig, even brought them to the hospital but deferred my care to the medical experts.
After seeing all the pain and suffering at the hospital, C19 effect, reflection...I'm all in for health care for all. My daughter goes to school in London and even as an American foreigner she has health care coverage under UK's NHS. I believe we should have the same here. We already have our nation’s Defense - Military, Fire, Police, Caltrans...If I learned anything from C19, the coronavirus;
USAHS, Medicare or Universal healthcare for all sounds like the right thing to do imho. C19 utterly revealed that we have the money, resources…for everyone and every age now. Not for just those 65+. We just lacked the transparency, vision and will before…

Back to fishing. Showed my pics to some friends up in Oregon and a vertical speed jigging master-fanatic, Aaron, noticed something. He’s really more a fanatic-master than a master-fanatic because he noticed my assist hooks were rigged wrong before he noticed the hook was in my finger! Only when Pete, aka Birdman, 323, Tunamon…replied that I like strange piercings then he realized it was my pinky in the pic. Here’s one of Aaron’s insight and detail that is evidence of his fanaticism to our sport: “But on a more serious note, someone needs to rig their assist hooks so the cord attaches to the hook from the point side(underside) of the hook and not the top of the hook eye. Otherwise, the hook tends to lever out away from the fish during a fight.”

Ps Happy to have the time now to re-rig some of my flatfalls and vertical jigs correctly. Just in case I hook something besides my finger…

Pss WARNING DO NOT TRY THIS AT HOME Especially, Aaron because he said he’d probably react and do the same. 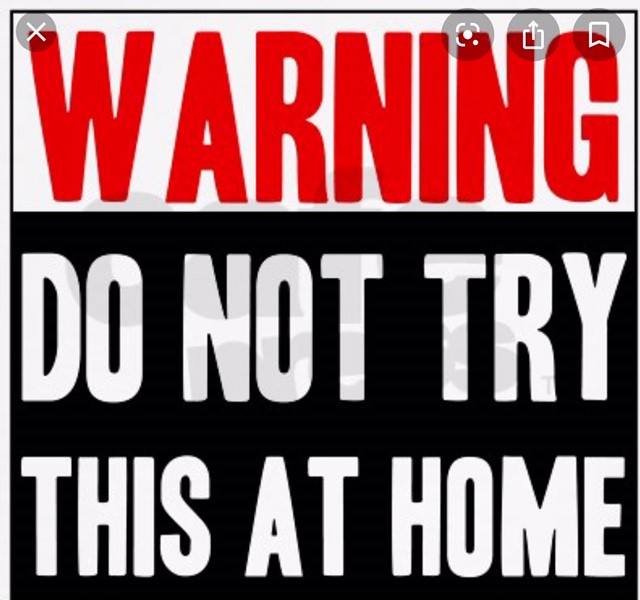 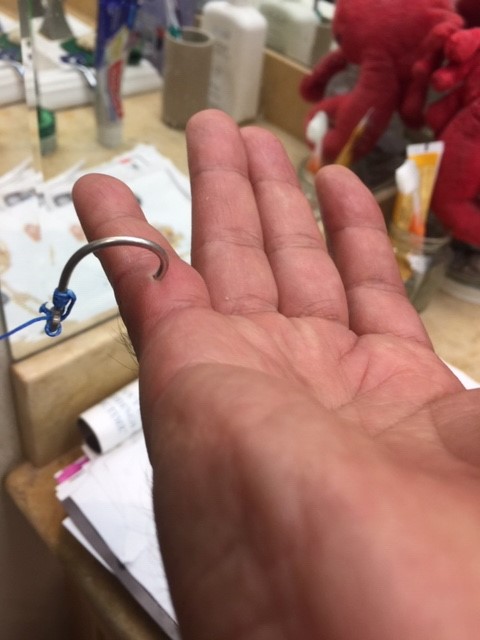 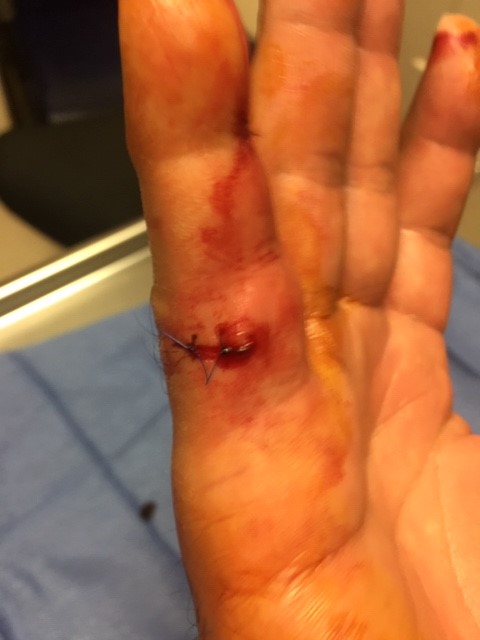 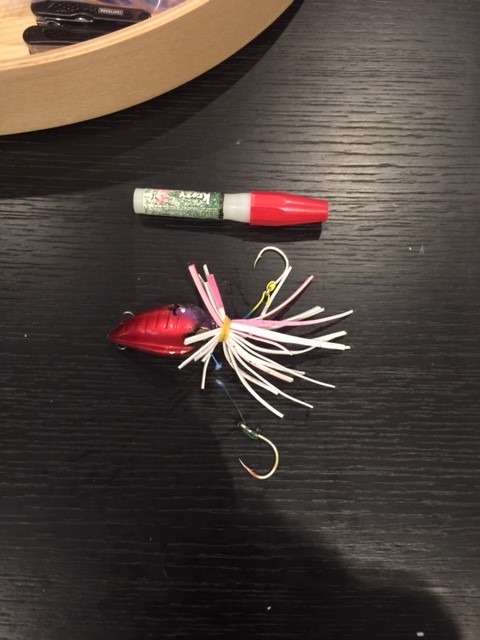 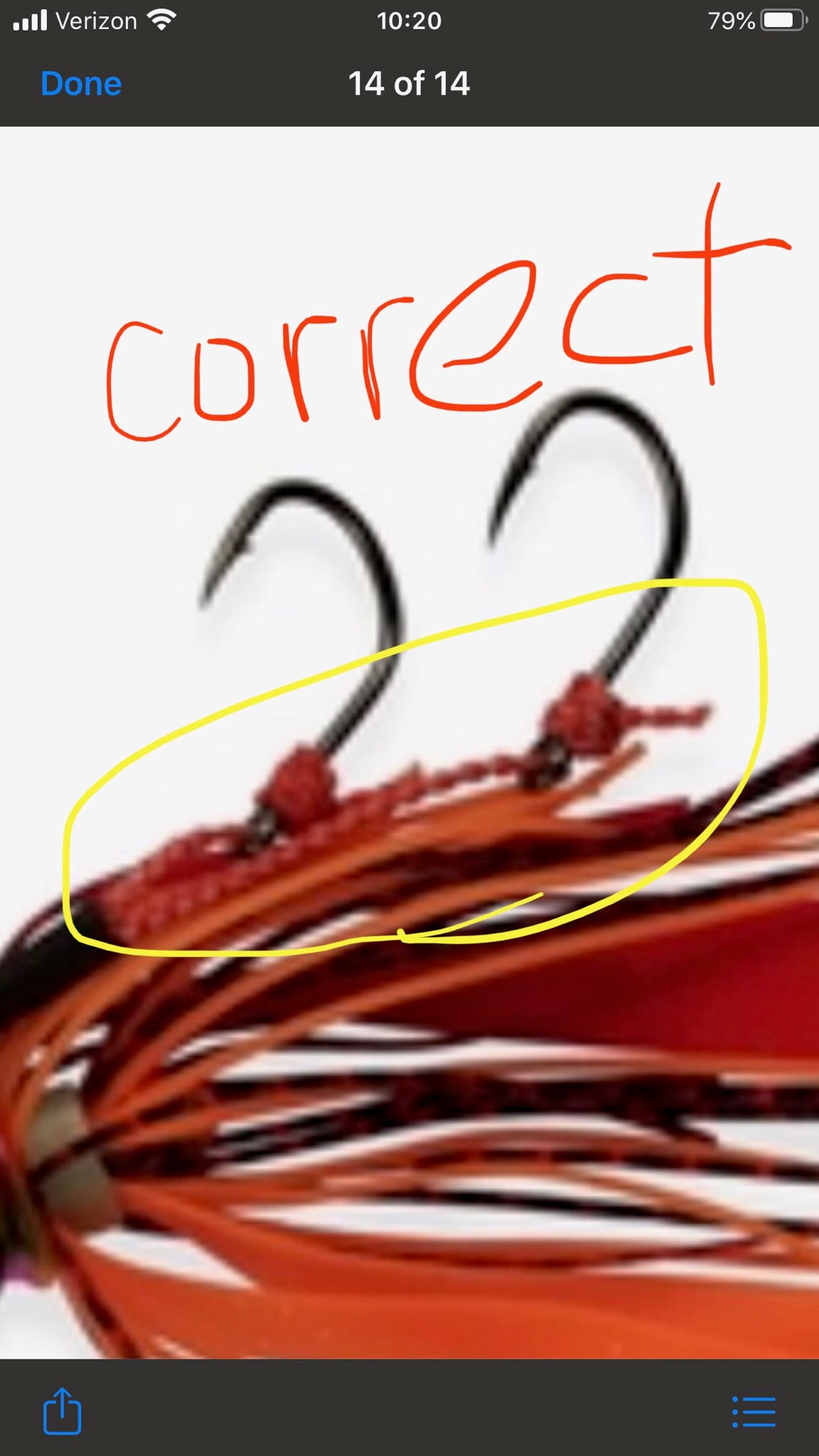 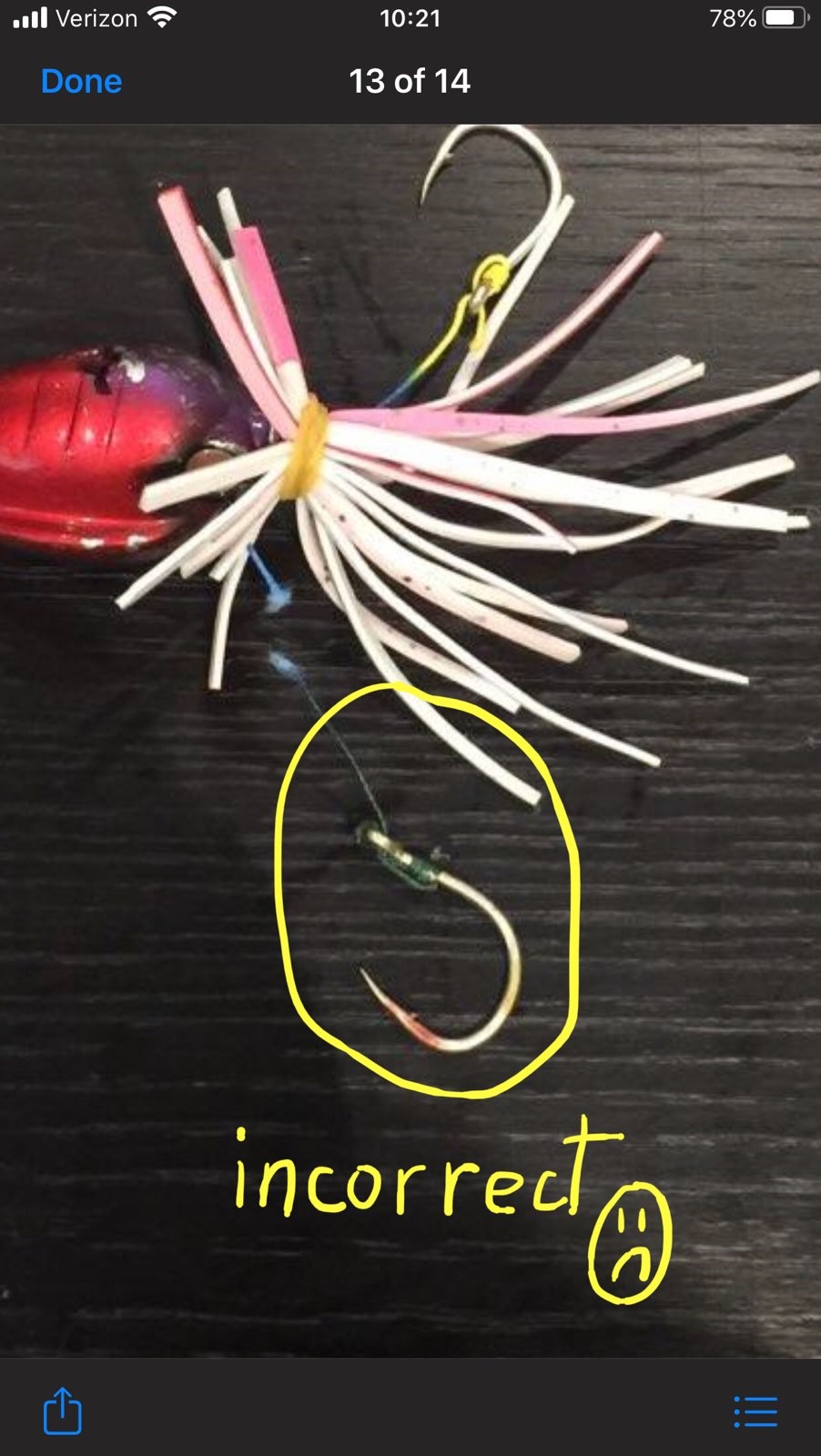 Didn’t want to wrap braid around bend hold eyelet Down and pull back out?
Maybe hook to big?
Would need extra hands
Upvote 0

Kinda big but mainly it had a nasty barb about 3/8" down...would've ripped on the way back.
Reactions: pacificscout
Upvote 0

Wished it were barbless... 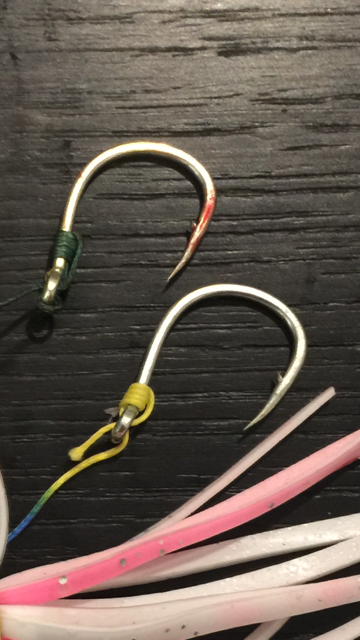 Well.....now you know how a fish feels...lol. Brave man you are going in to the ER. Thanks for sharing.
Reactions: Shon
Upvote 0

cut the skin at the barb with a razor blade, pull out the hook, put on a bandaid, and get back to fishing....er.....catching jigs that fall off the table.
Reactions: uglyducky, Shon, pacificscout and 1 other person
Upvote 0

woodfish330 said:
Well.....now you know how a fish feels...lol. Brave man you are going in to the ER. Thanks for sharing.
Click to expand...

I definitely know the feeling of a solid hookset now. Fishing circles whenever I can out of new respect.
Reactions: woodfish330 and pacificscout
Upvote 0

wils said:
cut the skin at the barb with a razor blade, pull out the hook, put on a bandaid, and get back to fishing....er.....catching jigs that fall off the table.
Click to expand...

Wish you were there cuz that's exactly what the doc did. Her's was just a fancier razor. No volunteers that night, me included. I'm pretty good about taking pain but self inflicting I'm unable.
Reactions: woodfish330
Upvote 0

Damn, so much about the barbs being too small on these hooks!

Glad you got it out. Crazy time to be in the ER.
Reactions: Shon and Cubeye
Upvote 0

Well I hope she stitched you up with red PowerPro and a Teramar needle . . .
Reactions: woodfish330 and pacificscout
Upvote 0
W

Small barb comments usually are about the hooks inability to hold with the ever increasing hook hole ....that one held just fine....lol.
Reactions: Cubeye
Upvote 0

So the Offshore Report is that you caught yourself?

That hook could have been backed out immediately before it swelled with the right technique. The barb is really small.
Reactions: Paddyman1, woodfish330 and pacificscout
Upvote 0
J

Rub some dirt on it.
Toggle signature
[SIGPIC][/SIGPIC]
Reactions: woodfish330, the SLIDER and wils
Upvote 0
C

I tied a hook like that once with a couple older guys offshore, the guy was a well experienced marlin guy and was pretty mellow about the comment, but it sunk quick and deep (probably like that new hook) Never again!
Upvote 0

Been there, had to dig a shark hook out of my palm with a filet knife. I'll never forget looking at the point sticking out of the back of my hand. Good times. I travel with bolt cutters now.
Reactions: Fish Asassin, the SLIDER and woodfish330
Upvote 0

I keep an 8" IRWIN/NWS powerslot vise grip cutting plier in my tackle box because of an incident at Catalina a few years ago. A lone angler was trolling and somehow snagged himself with a lure. He waved us over to help and explained that his cutters were useless against 4X hooks and asked if he could borrow ours. We tossed him ours and to our and especially his disappointment and surprise they were just as useless. The guy was a true fisherman though. He didn't race to the hospital in Avalon, he trolled his way there. Mini-bolt cutters a good idea too. We live and learn...
Reactions: woodfish330
Upvote 0

Worked at a gun store with a guy who tried to catch a falling bayonet, ended up pretty much the same as you. Thanks for the story.
Reactions: Fish Asassin
Upvote 0

Hopefully he's working on Wall Street now and has learned his lesson. He'd have a great story to share with his clients about "Don't catch a falling knife".
Have to thank my long-time friend and fellow fisherman, Kenny, for posting the story. It was not my intention to post because I normally only post fish reports but he suggested this would be okay under the current circumstances. After a day of thought I agreed figuring it's kinda my latest fishing lesson and adventure. It just wasn't on water...
Upvote 0

I know...that's why I wrote this;
"Prior to this I was thinking about investing time and testing these hooks under different water and structure conditions.
Pretty sure now they are not worth Testing again because I know the bill from the Emergency room will verify I’ve invested plenty enough."
I'll try and claim it as caused by C19, I was sheltering in place. C19 treatment supposed to be free. If not, $2K going to be a lot more painful to my BFT seasons fishing account than a 3/0 hook :-(
Upvote 0
Show hidden low quality content
You must log in or register to reply here.

Yesterday at 4:41 PM
kevina
K
Upvote 1
B
Offshore I Suck Again - BFT Own Me