Where shall I start.....this report is 4 fishing trips combines. 2 last week and 2 this week with Wednesday the most recent.

As always, it's been a humbling experience to catch all these fish and I am grateful for every opportunity I get to fish these Southern California waters.

I'll start with oldest to newest.

The most important thing fishing has provided for me is the ability to connect with like minded individuals who share the same common love for the sport. From meeting Jason, Ali, Brett, Henry, Vu, Barnes, Jeff,Erick, and so much more I can't list them all. Recently, there was one person that stood out and his name is Rich Holt. Some may know him on here and some may not but he is sincerely one of the most genuine guys I know. We connected at the dock a few months back when I was just testing out my boat. He told me he just got a boat too so I was like cool lets fish sometime.

Finally the stars connected and he wanted to put some bluefin on his boat. He has a 42 Henriques with all the bells and whistles including a side scan sonar. I decided to fish the east end Clemente Desperation area as that was no secret. Fish were def line shy and only wanted to touch the 40lb. We caught fish on the flyline and rubberband rig in which a 4 ounce torpedo was rubberbanded on 24 inches above the weight. No fish caught on the flat fall for us as we did try extensively. We ended the day with 5 bluefin. We spent the night at the 43 and were planning to fly the kite for some jumbos as we did the day before but someone felt sick and we had to go home at 10am. Super bummed but it happens. All in all a great trip, amazing friends, and an unbelievable boat that one can only dream of. Thanks again Rich!

A few days later, I went again to take my contracting friends who were working on my house. They had never caught a bluefin before and boy were they in for a surprise. I told them to expect nothing and just hope for the best. I've been on a good streak of getting bluefin on the last 7 consecutive trips so statistically, a skunk should be expected and maybe that was the best mentality coming in. Expect the worst, hope for the best. Same thing as precious trip. Couldn't get one on flat fall. Interesting note was this time, all the sporties on anchor were getting them good as we watched everyone get them. Many were caught on squid and anchor; both of what we did not have. Well, our luck would come and we ended up getting them. These bluefin are always brutal and every fish was over an hour battle with us rotating rods. Immediately, I thought to myself "fuck, if there backs are all tired and beat, how are they going to finish the work on my house?" All in all, a great trip again.

Trip 3 which was this past Sunday. Heard reports of navy kicking people out so I opted to search for these yft. Here is what I knew going in. You needed lots of chum and that it was a better morning bite. My game plan was to pack more bait than usual, which I was able to squeeze 5.5 scoops in my custom tank, and use 80% of it in the early hours. That was the plan. Found our first school under birds at 182 but didn't get them tongo. Second school was found I between 182 and 9. Saw more jumpers than last and I made it rain like I was a rapper at a strip club with unlimited $1 bills. Instantly the water erupted and before you know we it....all four of us are on (2 of which have never caught a tuna). I just admits....we including me lost so many fish. Past months I've been fishing nothing but 40-150lb line. 20 felt like trout gear. It was a good one hour of wide open fishing. We ended up with 8 and losing more than double that. Searched the rest of the day for nada and had plenty of bait left over. Great day, some good lessons learned.

Then Wednesday came. Same gameplan. Pack the tank with bait. Yes it was over crowded and some died but I knew that it was short run and I was going to unload them. Sure enough, the first group of fish reacted well and this time they were at the 181 (outside of it). Made it rain, made it rain, made it rain!!!!!! Same thing. Fish ereputrd everywhere and we had 4 fish going. Whooooooo. And I lose mine, we land 2, lose another etc. for the next 1.5 hours, it was game on and we land as many as we lose. Fish were bigger. 20-35 pound range. Key thing was to still keep chumming of everyone was hooked up. I would make sure to still keep throwing bait while hands tied up.

Now i have literally 10 pieces of bait left and it's we figure we had a great day so let's just start heading back. But still, we had 10 pieces left and that could mean maybe 10 more fish. Now my next move may not be a respectable one, but I don't know if it was right or wrong. Maybe you be the judge and I'm sure I'm going to get soMe negative comments but it is what it is....

I was doing maybe 10 knots so I could look in my binos and drive at same time. There was also a charter boat to my right about 3-400 yards. I see a school of birds working in front of me to my left but I know I don't have chum to bring them up so I gunned it in that direction hoping it would catch his attention and it did! So, I positioned myself I'm from of the birds almost on top, and sure enough the sporty came and chummed hard and they erupted. Yeah, I was close to them, but i never went to them. Wrong or right, I don't know. But what I do know is "it's not about your resources. But it's about your ability to be resourceful." We caught our last 2 fish and left while they were bent. At the end of the day, we had 17-18 fish. Gave some fish to the bait guys and some guys at the dock in exchange for ice as we had more than enough for us. Key thing for these yellowfin has been 20lb line and mustad size 2 hooks. I'm normally an owner guy but kept losing so many to them. Being a lot of bait. Tip the bait guys $20 FIRST. Chum heavy and know it's more of a morning thing. That's just what has been working for me.

Well, no fishing for me next 2 weeks as I have some work things and house remodel things to take care of. The boat always gets stored indoors and out of the sun. Maintence is always on point. Love this boat! 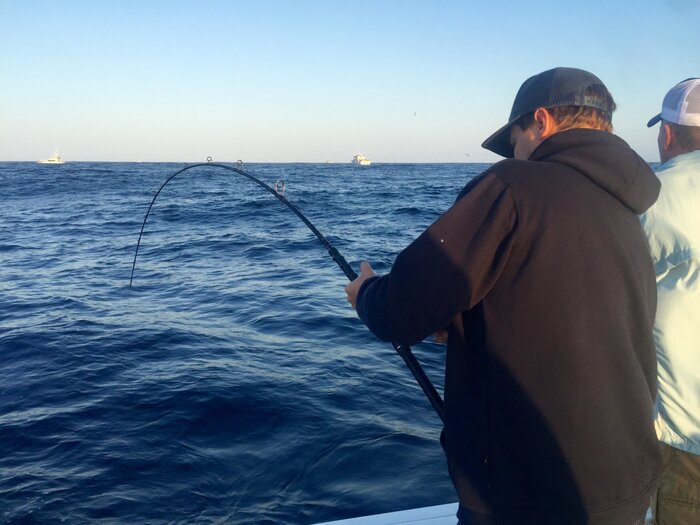 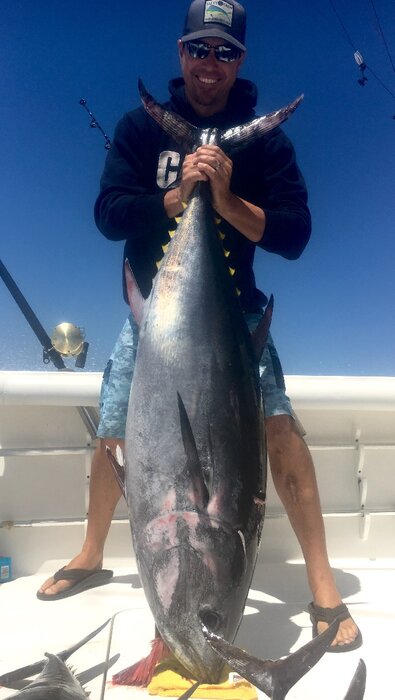 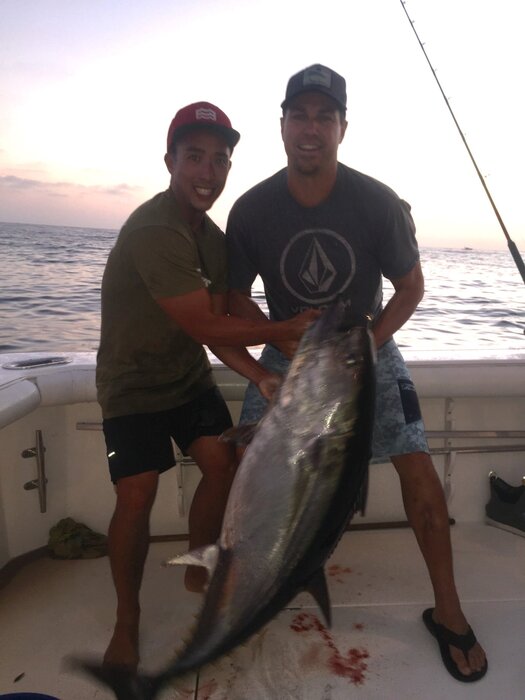 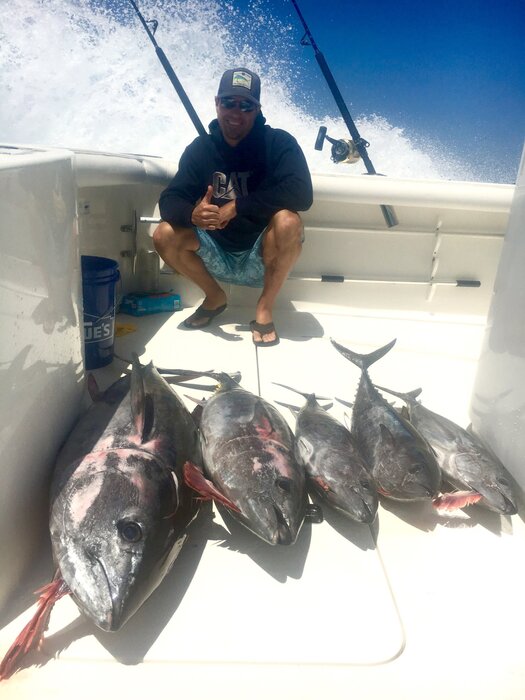 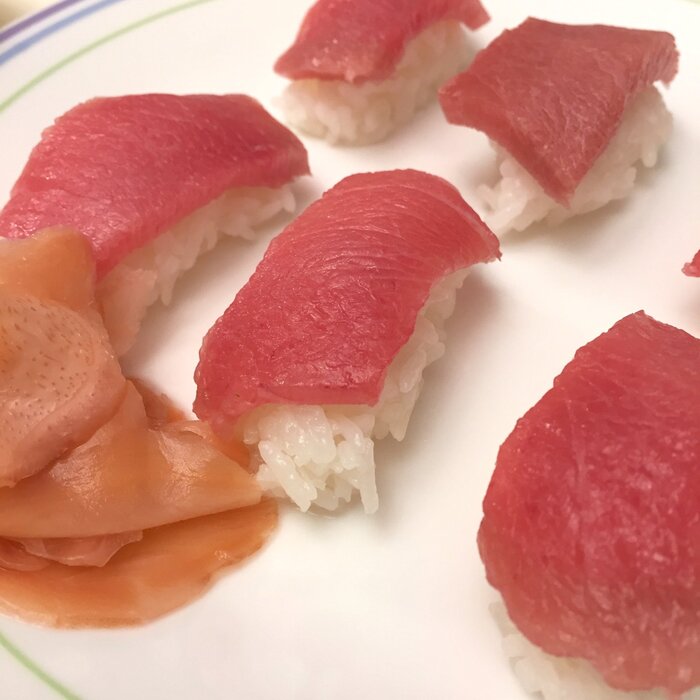 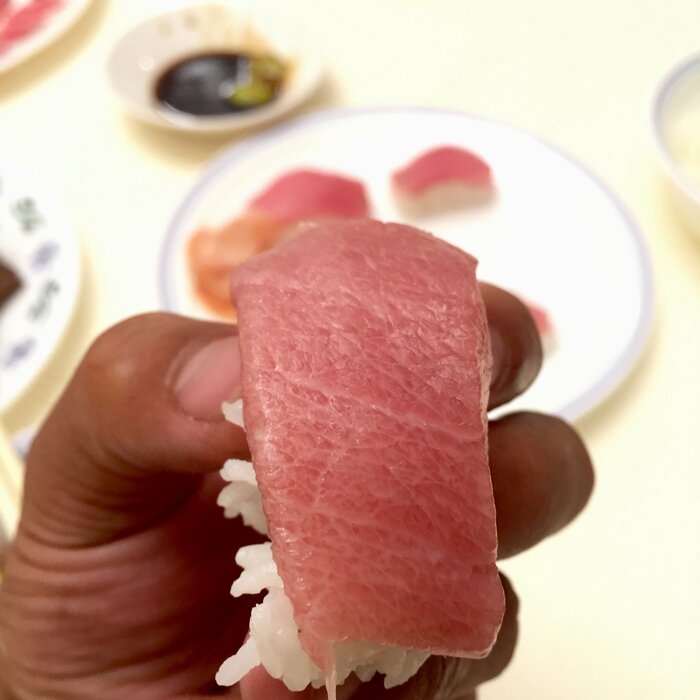 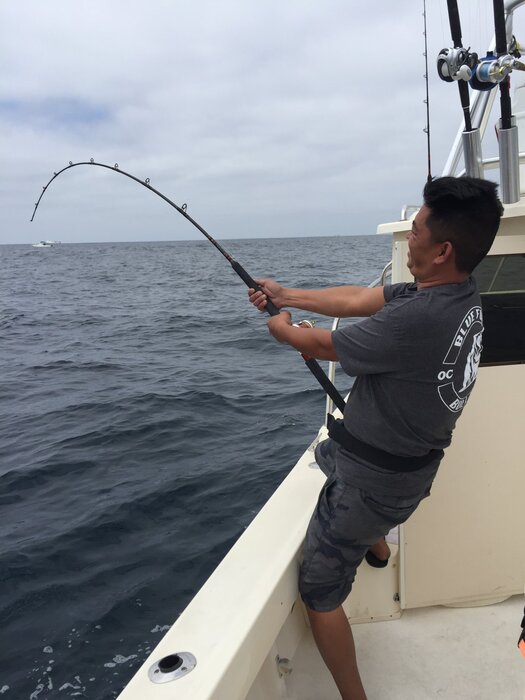 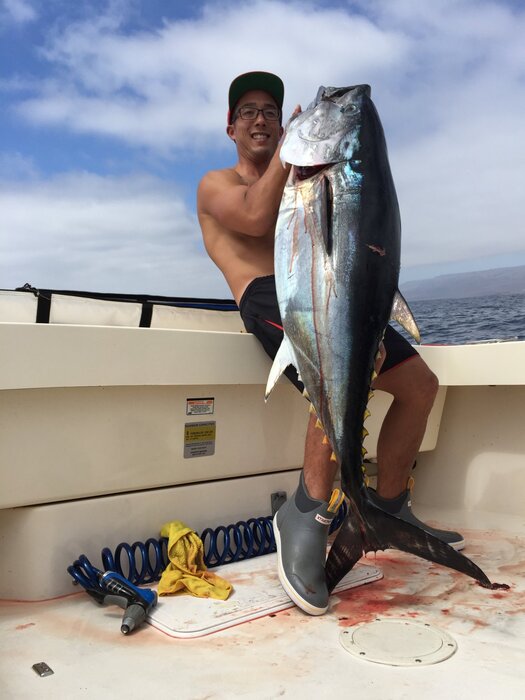 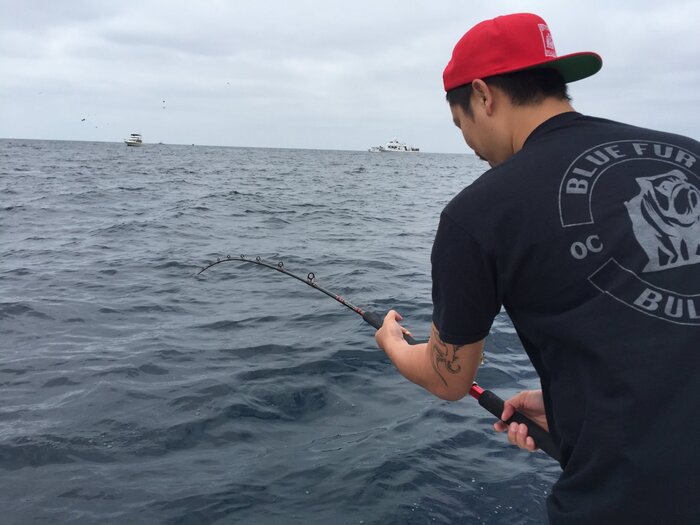 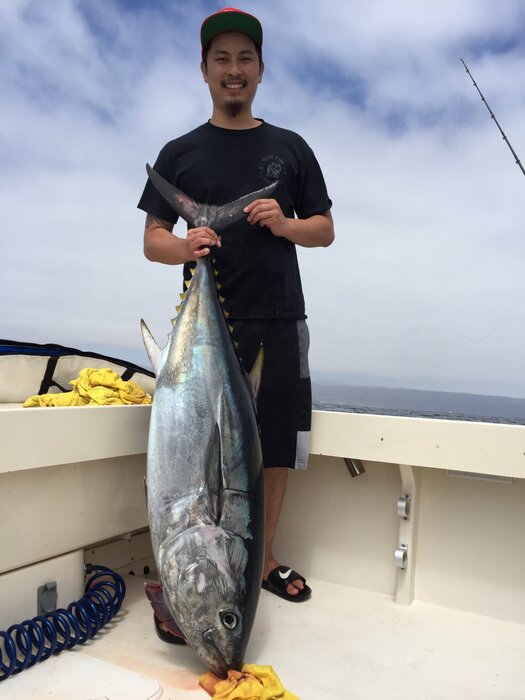 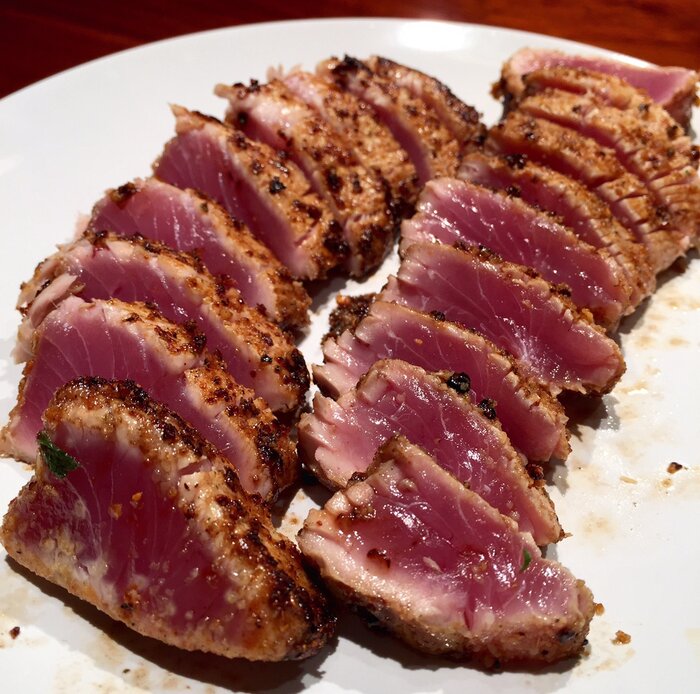 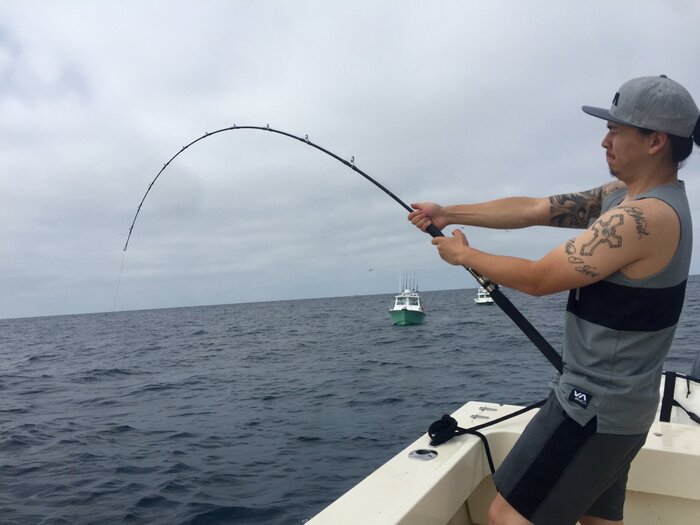 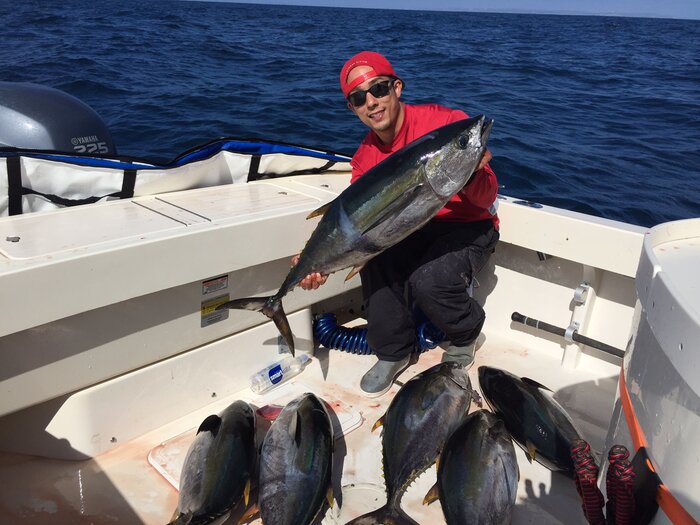 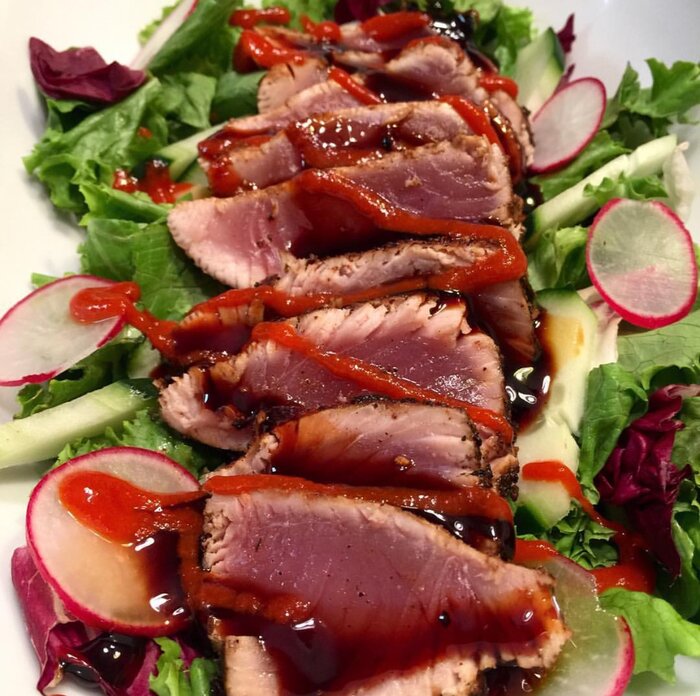 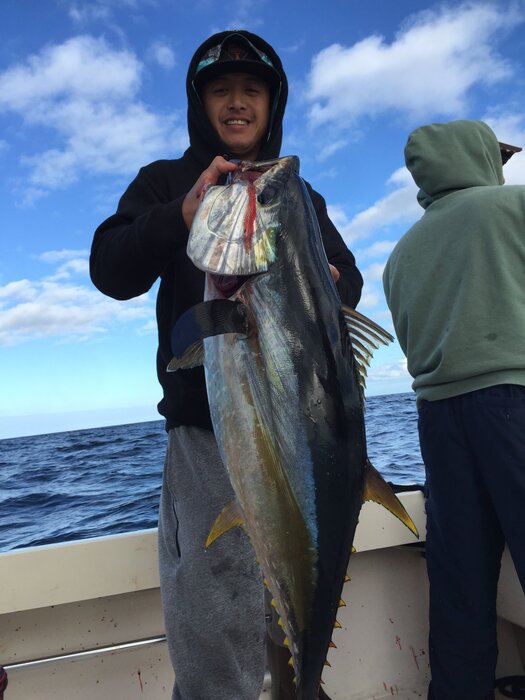 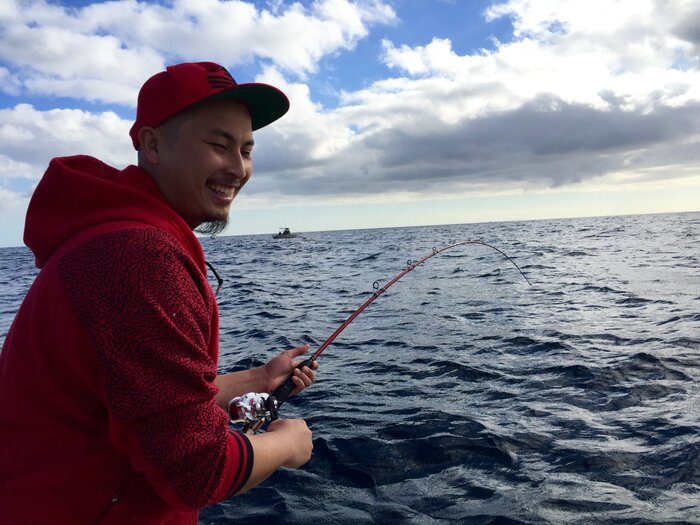 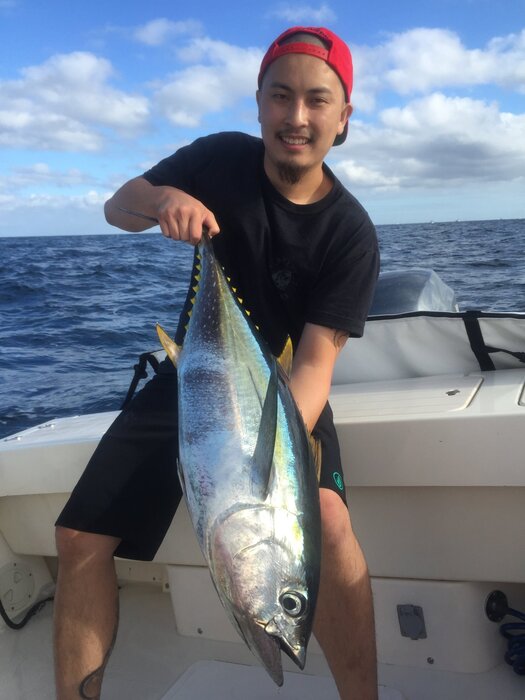 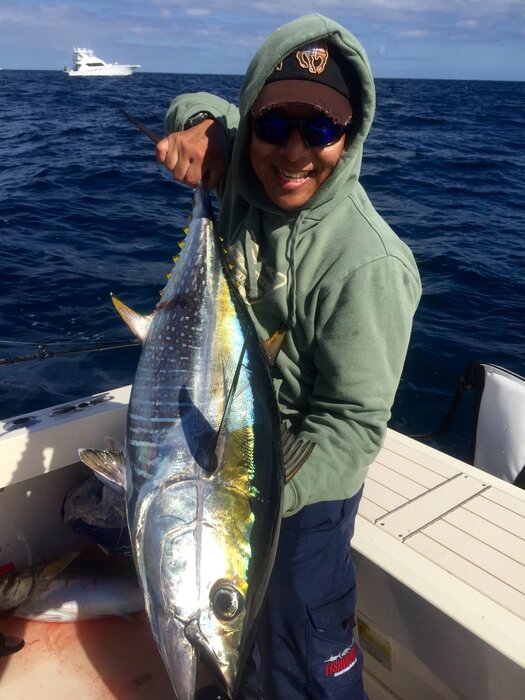 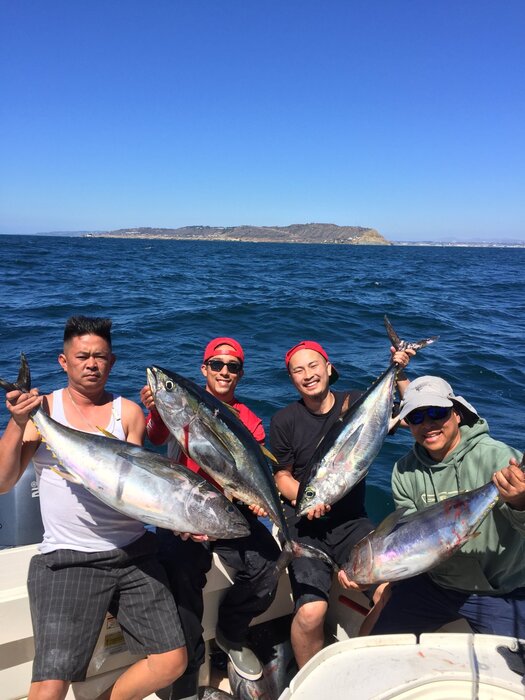 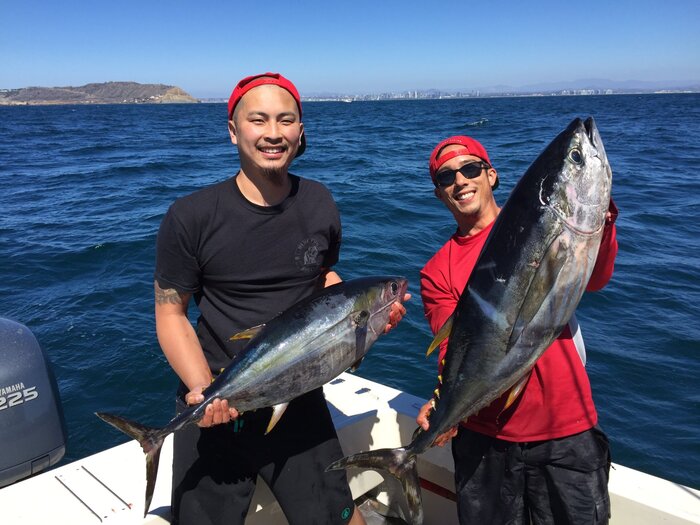 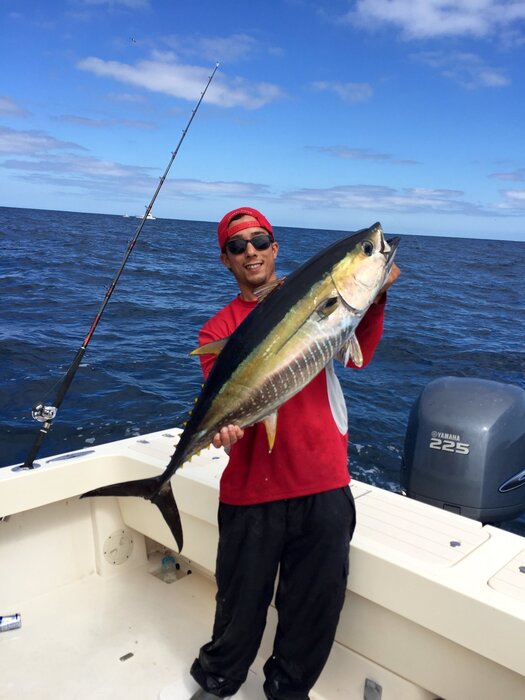 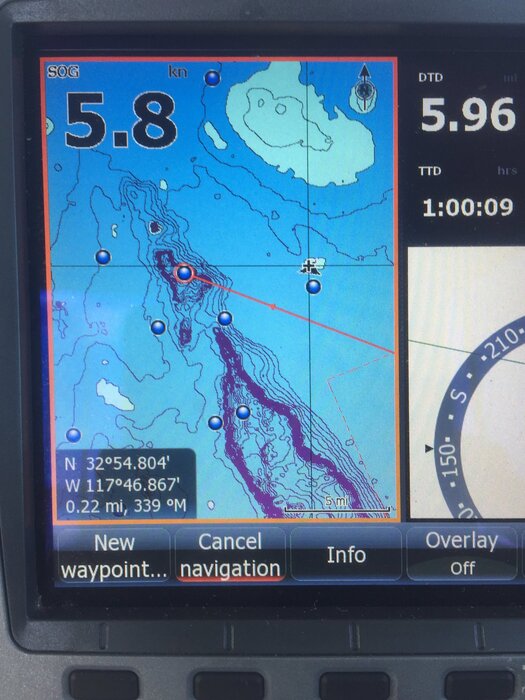 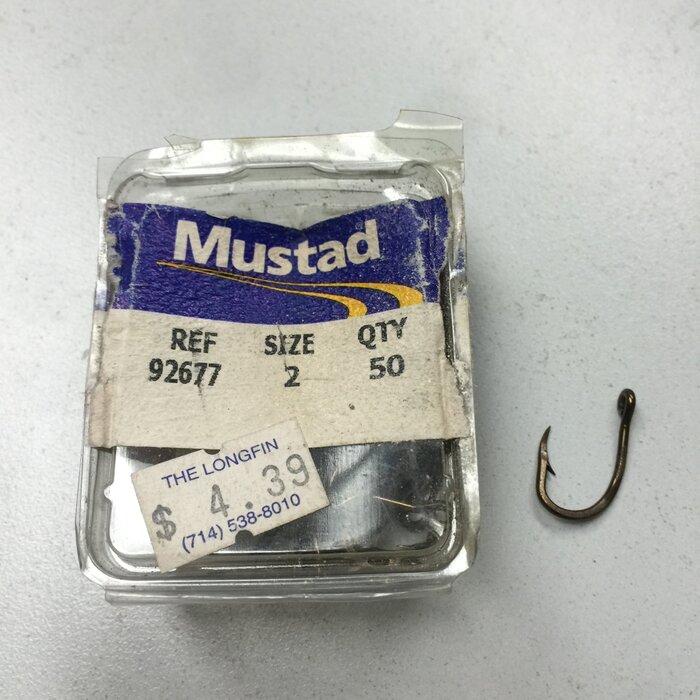 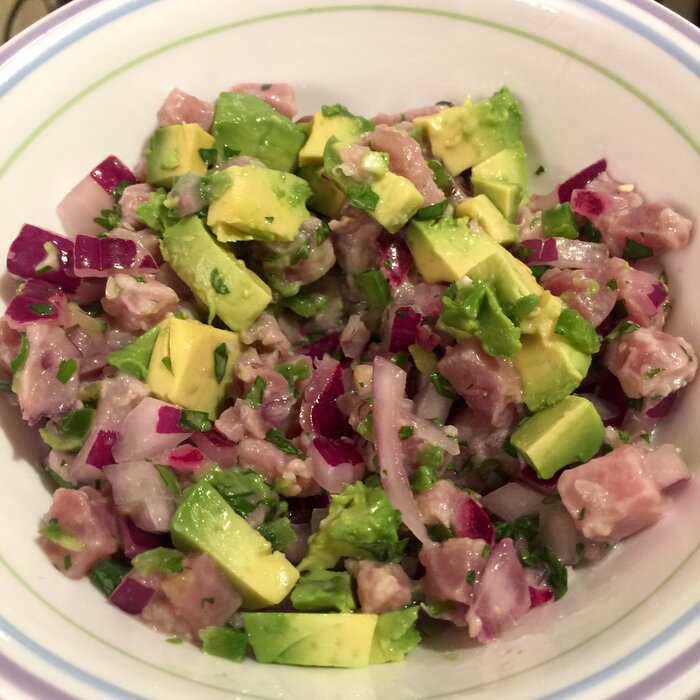 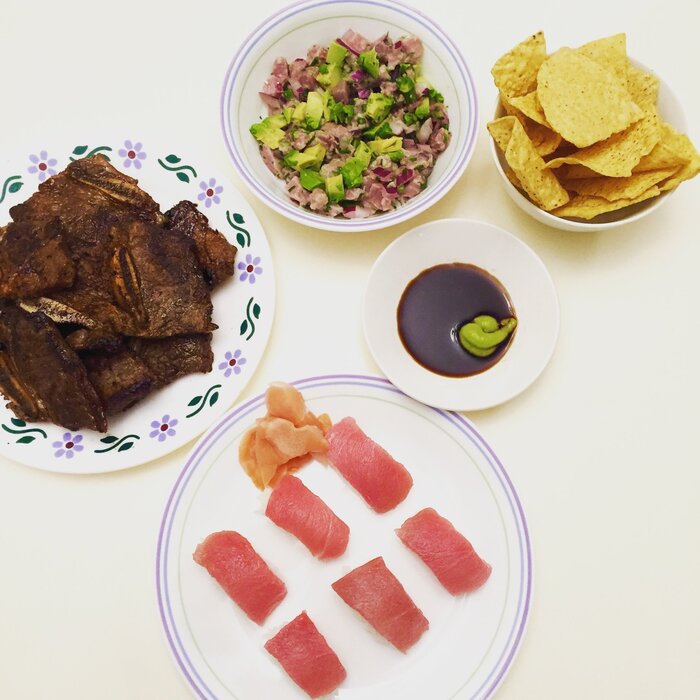 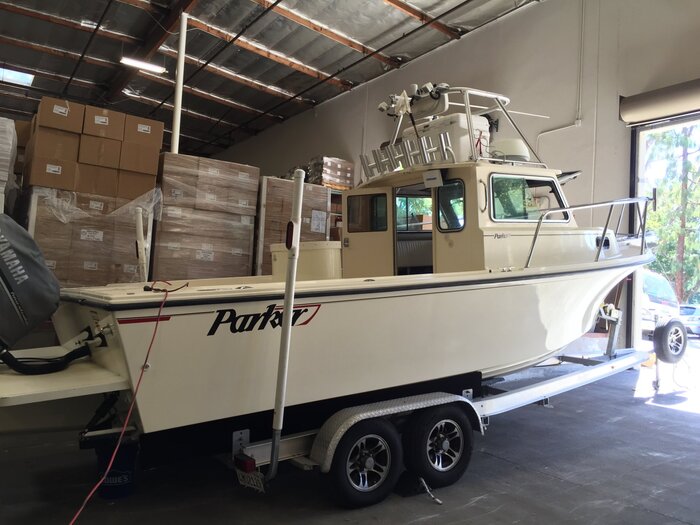 Boat
Working on it

Great read! And pics! Karma is real and you got the good MOJO going! Cheers!

Loving the report and pics... WTG! Now we need to see your recipes!!!
Expand signature
Take a kid fishing and release what you won't eat so they can have something to catch when they're older.

What's some tips to hold a bit more bait then usual? May I ask how big your bait tank is?

Thanks for the report

Nice fish. The folks enjoying your food are enjoying themselves.

Thanks for the report.
Expand signature
Jon being Reel Phat on the Reel Deal

NICE FISH and great report Billy. NOW I'm hungry and will have to eat a 2nd breakfast!

Thanks for the post. Nice pix
Reactions: Fishingguy
R

I just logged that strategy under, 'next time when I'm low on bait'!!!
Reactions: Fishingguy

You're a good dude Billy Hoyle

Billy, your tag line should be "Don't hate me just because I can out-fish you".

Excellent report. Lots of great info, especially chumming knowledge " make it rain like a rapper at a strip club with dollar bills "
C

Billy thank you for posting your reports and allowing us to live vicariously through you, not to mention the invaluable amount of information you have been able to bring us. Those who are smart enough, will store the tips you are logging here and put them to good use instead of being envious and attributing your journey to luck alone. I did the whole herbalife thing for a while so I ran into your inspirational instagram which showed your transformation pics and its funny to see you crushing it in this genre as well. I have only had time for a few trips this year due to me learning a new trade, lost a couple nice yellows and tried once at desperation for the skunk on the bluefin. Amazing how what seems to be such a downer year for many has been absolutely incredible for you. Cheers to you, my hat is off to you and I can only dream of having my own fish killing machine like you do and becoming even half the angler you have become this season. Just out of curiosity, what do you do for work? Congrats again on an INSANE season, your friends and family have to be getting tired of tuna by now...

Some beauties right there! Congrats!

carbonbass said:
Those who are smart enough, will store the tips you are logging here and put them to good use instead of being envious and attributing your journey to luck alone.
Click to expand...

Who on here said anything about it was "luck alone"? Jeez.....

Good luck on the remodel by they way (we are just about finished with ours).

I can't wait to get back on the water again. October is my favorite month to fish offshore in So. Cal. Always fun to find those last remaining spots of fish.