Full disclosure: Posting this late report because we lost a net, and just realized it. Duh.

Did a combo Lingcod & Lobster trip just before the new year to Catalina. Wasn't until this past weekend that we noticed we left a net behind. Hoping a BD'er found it. Date was 12/28, and here is the long version.

Took advantage of the best weather day between Xmas and New Years and decided to head out for some bottom critters. First stop was for some Lingcod. Started in 30 fathoms and Eric promptly lands a nice keeper. I pulled in a small 26 inch model, which was released. Next one was a fatty around 12 pounds, but bursting at the seams with eggs, so she was released as well.

Moved to one of our deeper spots where I immediately got bit on a nice fish. Turned out to be my personal best local Ling at 23 pounds. She was also laden with eggs, so I released her after the pic.

Anyway, I kept the next one which was in the right size range, and off we went to the island. Only my third trip this season, since the Tuna were biting well into the Fall. But Catalina has been seeing some wicked currents at the West End. We've now added a 5 pound sash weight to the deep nets, which already had 3 pounds of lead strapped to them.

Current runs toward the West before dark, but then turns around and runs East after the sun goes down. Haven't figured out why this happens, but it seems to be more pronounced this season. We did good on the hooping and got our limits in the middle of our second set, but it appears we left one net behind, We suspect the light went out during the soak. The net is marked with a large '6" on the float and had the name Eric Hurford and his phone number on it. Left it behind at the West end of Cat on 12/28.

In the off chance someone on BD found the net but couldn't read the phone number on the float, please post in the reply. Very much appreciated. 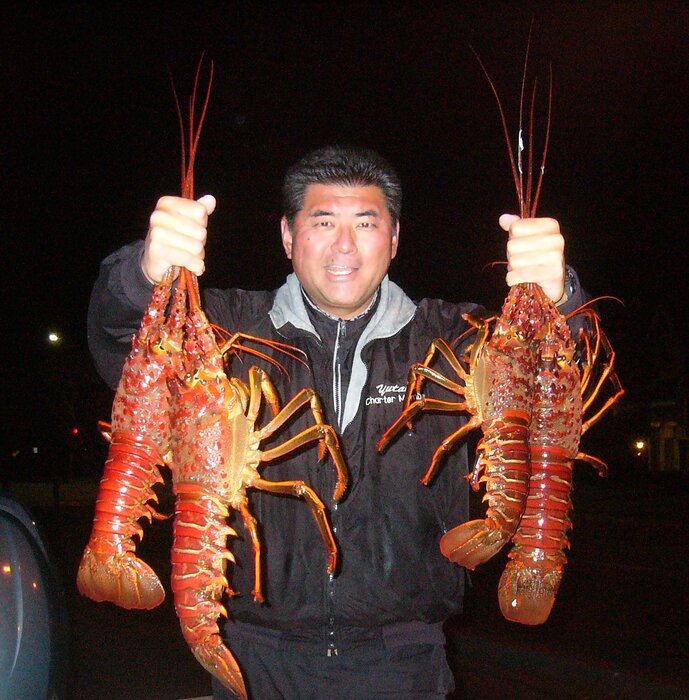 Nice report. Glad you saved it until now. Reports are few and far between.


Yutaka said:
I pulled in a small 26 inch model, which was released.
Click to expand...

I thought legal size for lings was now 22 inches?
Upvote 0

We typically only take one fish each per outing, so we like it to be a good size. Not too small and not too big - like 12 to 20 pounds, ideally. A 26 incher is too small. I release everything over 20 pounds too - big breeders.
Toggle signature
Yutaka
Reactions: fishpsychic, lkatdpelicanfly, Zika and 1 other person
Upvote 0

Good for you.
Reactions: Yutaka
Upvote 0

I'd better never take you Halibut fishing with me again, can't have that happen.
Nice job on the MAMA Ling lettin' her go.

NOTE to self: Trip was on 11/19.
Last edited: Jan 13, 2017
Toggle signature
Luck is where planning meets opportunity.
Reactions: Yutaka
Upvote 0

Way cool to let the big female ling's go. The little 26" model may have made a nice dinner for 4 at my house though.
Those bugs look fat too.
Reactions: Yutaka
Upvote 0

Nice report!! And nice conservation!! I feel sick in May when the few times of the whole year the wsb really bite!! The hens are stuffed with eggs!! Same when sand bass spawn in summer the whole fillet table is full of eggs and milt!!! So again nice job
Reactions: Yutaka
Upvote 0
Show hidden low quality content
You must log in or register to reply here.