A few of you may remember my buddy Caleb from our 3-day Vagabond trip 1 year ago. In his enthusiasm at catching his very first tuna on his very first trip - a 50lb bluefin on a knife jig - he decided to help the deckhand pull the fish over the rail by grabbing its gill plate, with the following result. That's a 7/0 Mustad assist buried to the eye. 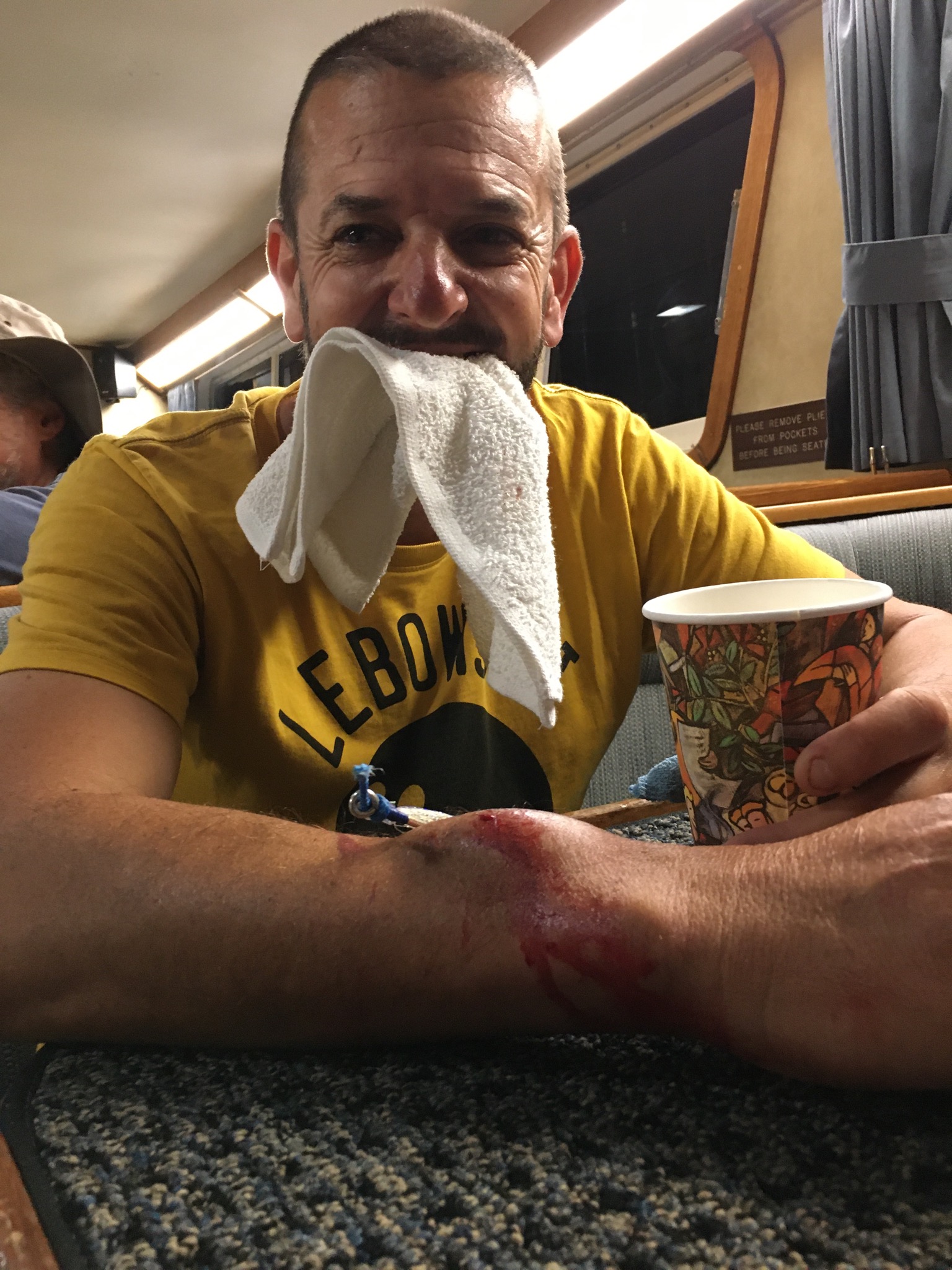 So last Thursday the 25th, Caleb 'the Spartan', Geoff 'the innocent', and I are back on the Vagabond for another go. Mike Lackey is at the helm and we are curious to see how his approach may differ from Cameron's. We load up, spend an hour at the receivers getting big beat-up bait, and are off to the waters west of San Clemente.

Naturally, being as it is their second trip Caleb and Geoff are now authorities on most things fishing. with opinions to share on sea conditions, bait quality, and the smells wafting from the galley. The rest of the passengers - by-and-large a grizzled and experienced group - squint and quietly look out over the wake, nodding occasionally, as the boys rattle on. 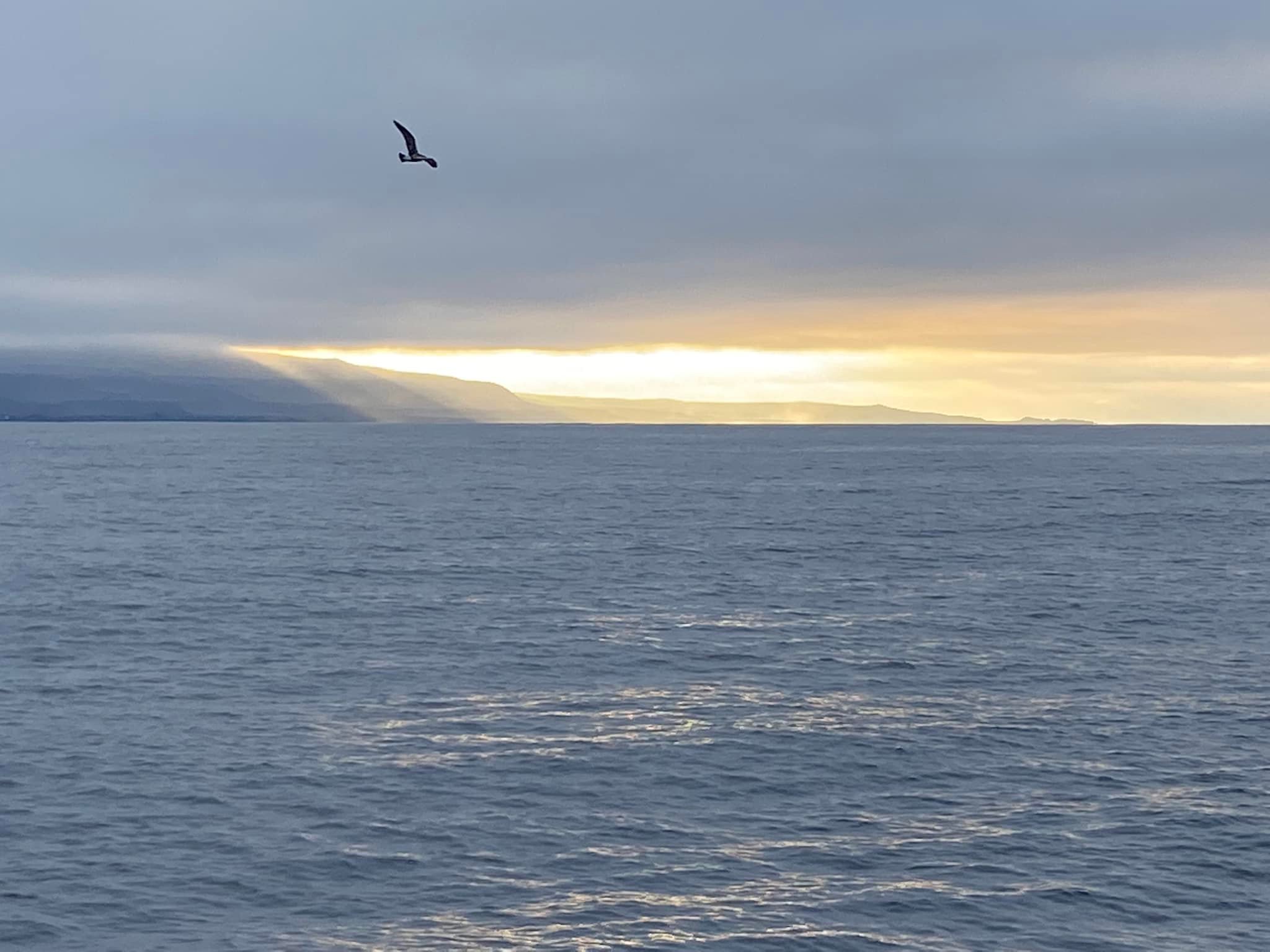 But progress takes many forms and I'm cheered that in the intervening year they have both mastered the FG knot(though Geoff still can't tie his own Uni). I anticipate fewer sad little tugs at my sleeve while I'm in the scrum flylining a bait, turning to find a frayed leader or tangled braid and a confused sorrowful expression.

Dinner's over, and Mike's throttled back and is in search mode while the day's waning light leaks out of the cloud-addled west. Ah, a school at 180' to 300'. While others start with the deep jigs, I'm curious about the new drop-shot sinker rig everyone's talking about and run a 4oz sinker a few feet below a 2/0 stitched to the nose of a seriously unhappy sardine. Don't worry, lil' fella, your troubles will soon be over. It drops like a stone to 200' and I get to relax at the rail for 30 seconds feeling the bait's jittery exertions through my fingers on the braid while the guys around me crank and wind, pant and sweat, before the rod abruptly loads up. Biterrrr... Yeah! my first (barely) triple digit bleufin. 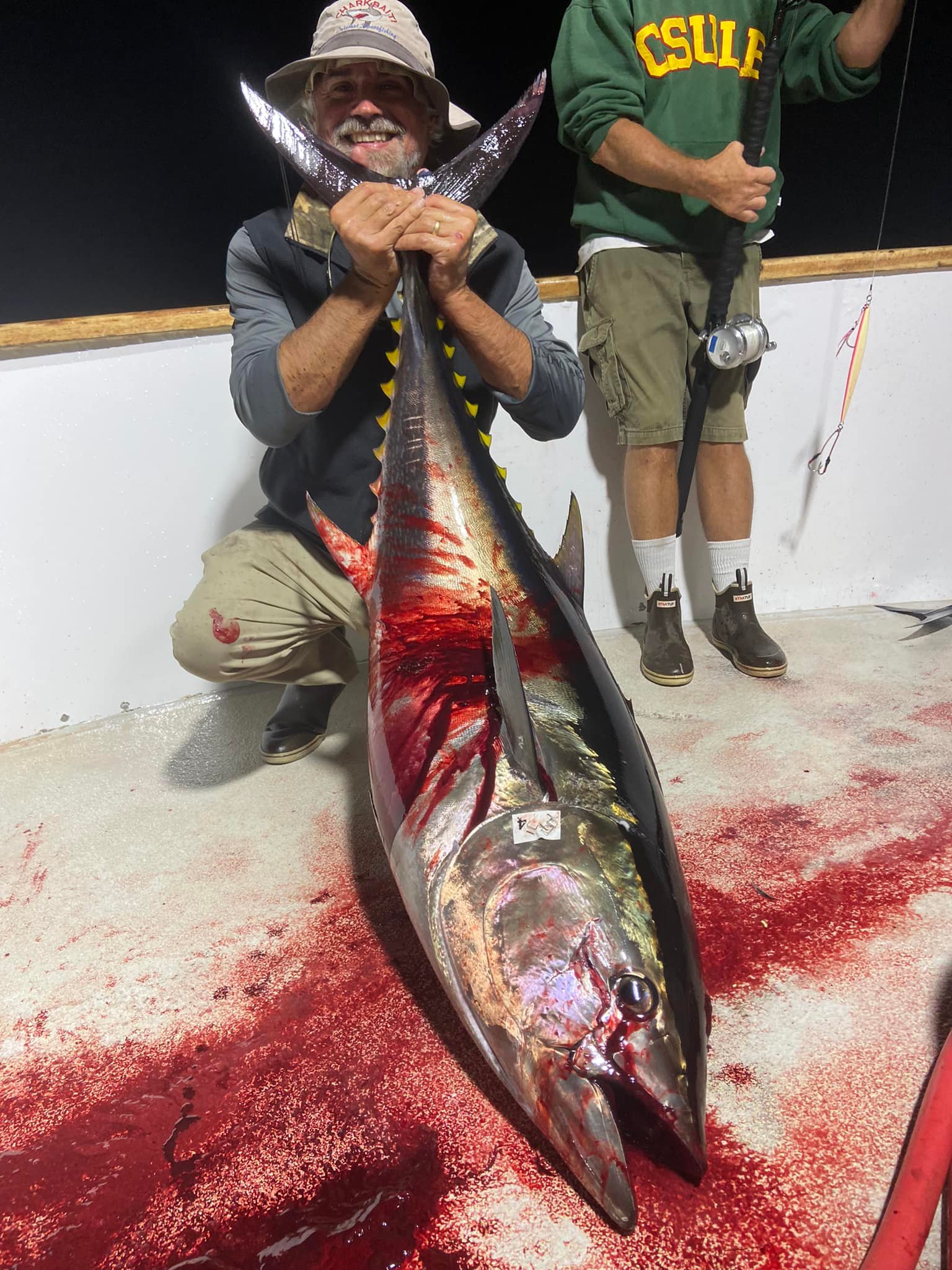 By midnight, there were probably 40 fish on board with a lot more farmed. Other than that first fish, all were caught on knife jigs in the 250g to 400g range. Color? whatever. On the drop? whatever. On the retrieve? Whatever. Bluefin may be assholes, but tonight they're hungry drunken assholes at Denny's after the bars close. The fish ran from 40 to the low 100's.

There was a young guy from Connecticut / Florida - Jarett - who put on a clinic with a Black Hole vertical jigging rod and a Valiant 800N loaded with 100# solid. The rod looked like a Crappie rod amidst all the Centaurs and OSP's and 775XH's at the rail, but he used that short noodly action to make the jig dance like a coked-out weasel puppet and the fish loved it. He'd get hammered, point the rod at the fish, and crank it in. My guess is we will see a lot more of this for these mid grade fish if for no other reason that his rig weighed half of anyone else's. I watched him put the beatdown on a fish that might have weighed 110 pounds, and he made it look easy. No rail, no leverage, no problem, as with the short whippy length of the rod the fish never really punished the fisherman.

About 1am, another friend - Shane 'the Madman' - hooks up a good fish on his vintage Triton 30 single speed loaded with 80 pound braid and a 500 gram jig that looks like a sawed-off Louisville Slugger that's just graduated from the Rue Paul School of Flamboyance and Poor Taste. It's a big tacky joke sprouting mylar skirts and assist hooks like feathers on a tranny's ass. With the rest of bite dying off, most of the remaining fisherman gradually rack their rods and watch Shane get his butt kicked on repeated trips round the boat. Which is fun, because Shane is an animated fellow with strong opinions and a taste for gratuitous profanity, and appears to be taking his ass-whipping personally.

It's a colorful hour, but Shane gets his fish. At the dock it'll turn out be 174 pounds (gilled and gutted) and the big fish of the trip. And Shane's PB by about 120 pounds. That's cool. 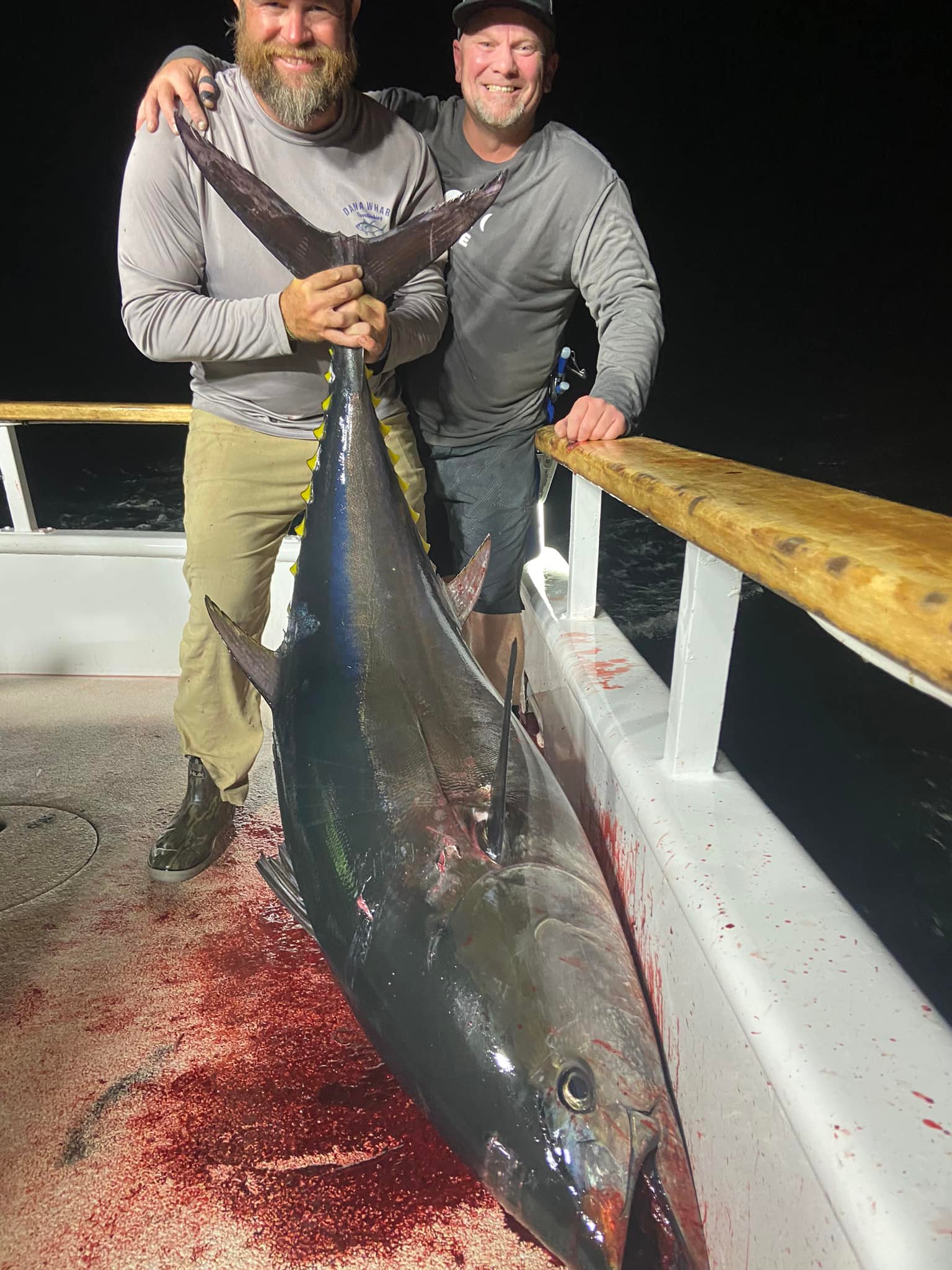 I go to bed because the bite's died, I'm tired out from my 4 fish tagged and one hand off and hell, we have 2 full days to go.

Which is a mistake because at 4:30am, Caleb 'I weigh 145 pounds in a wet t-shirt and have trouble dunking on most 12 year olds' hooks another good fish on a 250g flatfall. Caleb's scrappy though, and he's fishing my Viper/Mak 20, and when I get up at 5:30 they are just sliding his fish into the RSW. He's pleased as punch, not least because all his knots held. The fish looks to be the twin to Shane's fish but at the dock will prove to be 3 pounds lighter (probably those sinkers Shane sewed into the vent of his fish). On Caleb's second offshore trip ever he's nailed an almost-cow. Dang. And I've barely broke the triple digit club myself... 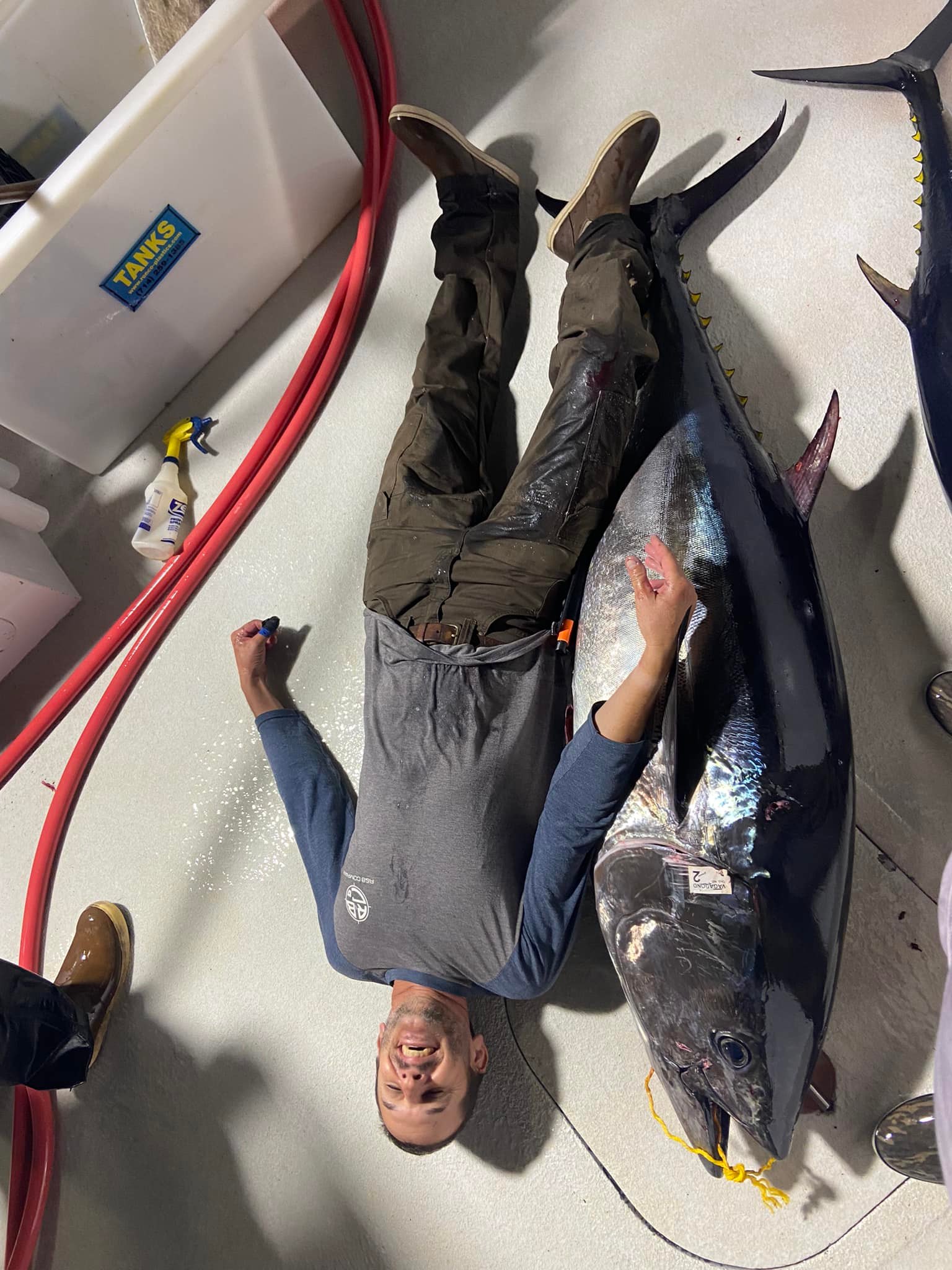 Daylight fishing is always different, often slower and for smaller fish, but today's pretty decent. After picking up another fish on a sinker rig, while others eat breakfast I flyline a bait on 30# and a little star drag - telling the deckboss (Adam 'the Sceptic') I want my 6th fish to be a challenge - and get picked up almost instantly. Wish granted. Fish was close to 70 pounds and something of a handful.

As the day crawls by some fishermen pick away with sinker rigs and smaller jigs, while others loll about on the sun deck - particularly those with almost-cows to their name - swigging Sailor Jerry's and annoying their compatriots with their newbie superiority. 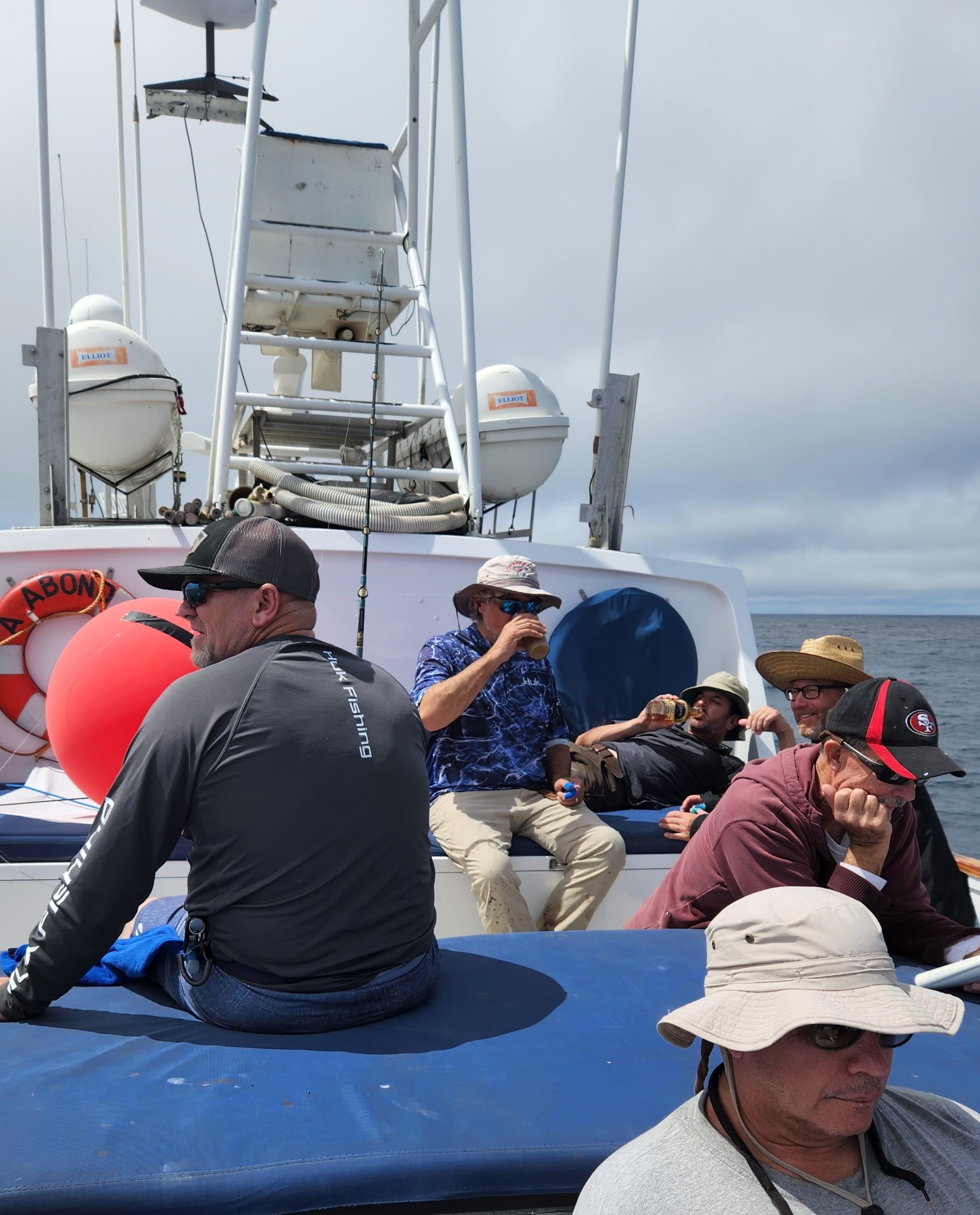 The second night is rougher, with a crossgrain current and chop and a bit of rolling swell, but the fish are still willing though the larger models seem to have found a different cantina to party down at. By 2am we're closing in on limits and Mike makes the decision to head to Cortez bank and target yellowtail for our last day.

This is a popular decision, but the results don't measure up to the anticipation. The fish are there, but fickle. The currents are there, but fickle. Some of the guys are tuckered out, some are hungover, the truly committed are both. YoYo's, flyline, dropper - all the sexy moves are laid out on the floor but it's late in the dance and nobody's bringing the whole Travolta. A few fish are fooled - maybe a dozen by the end of the day. All solid fish, 20 to almost 40 pounds.

After landing 8 bluefin and handing off 4 more in the first 2 days and perhaps starting to swagger a little bit, I've been served up a big dish of humble pie. I don't get even a sniff though I rage from stem to stern throwing everything in my kit. Oh well, my wife's likes me better when I wear humility like an overcoat; she's gonna like me fine tomorrow.

About 5pm we reel up, and start heading west, ostensibly looking for kelps and the temperature break and maybe a few dorado, but the vibe on the boat is mellow and everyone is more than sated. Another outstanding effort from Glen in the galley, and satiation turns to torpor, We're headed home. The poker chips come out as do a few more beers. Another fantastic trip on the Vagabond, with its outstanding crew and legendary captain, is in the books. 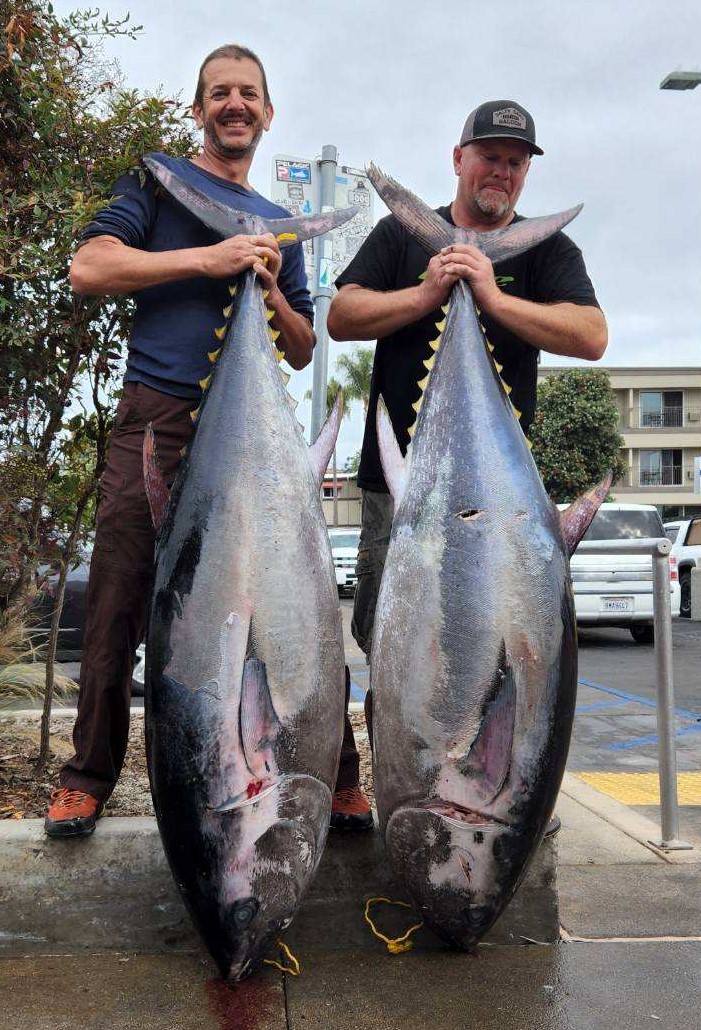 Man, you weave a tale like an ol cowboy around a campfire. Thanks for taking us along.
Toggle signature
Get offa my lawn.....
Reactions: HoxFish and Deadlift500
Upvote 0

WOW hella report thank you so much for sharing your experience!
Toggle signature
JC
Upvote 0

Say no to bad info

nice trip and nice write up.
Upvote 0
B

I just did nearly the same 3-day on the Intrepid, and I like your write up almost better than my trip. Best writing I've seen on BD, sir!
Reactions: Deadlift500
Upvote 0

Epic read!! Thanks for the report.
Great boat and crew!
Upvote 0

NICE report, on a fine trip!

excellent funny report!
Love that CT/FL dude doing it boss style...
Those Black hole rods and similar have been putting the hurtin on the BFT/YFT for over 10 years ..at half the weight of typical setups - and you can rail them in a pinch as well..
Toggle signature
Blue Chum Saltwater
Upvote 0

Enjoyed the read. well done brother. Black hole rod's are the sh*t. First time years ago I see one and say to myself... I better teach this guy how to use the right tackle. He schooled me and open mined learns again... however I don't like coffee grinders I am a rail guy in my mid 60's. Again thanks for the read. Enjoyed it.
Reactions: 2tuna and Tunahead
Upvote 0

Congratulations to another trip. I remember the story about your buddy from last year . Glad he’s doing fine
Upvote 0

Great report/read/pics and NICE TUNA guys!
Mike and the Vag crew a solid operation!
Glad you had a great trip!
Reactions: RandyPotts
Upvote 0

Family Crest - My Lure is True

I'm headed out again this week. When I get back I'll PM you my photos so you can work your wordsmithery on it. Appreciate it.