There I was, headed out on an epic day of chasing bluefin. Left out of Oceanside on Thursday with a full scoop of dines and a dozen mac's to the promised land by the 209. My buddy Doug and I were all set with every piece of gear we could think of on the boat. Trolling rods, check, heavy bait rods, check, light bait rods, check, heavy casting rods, check, kite rod, check, helium, check, ballons, check. Water was about as flat as the ocean gets, no wind and very little swell. Boat ran perfect after getting its annual tune up and fluid replacement.
Off we go. About ten miles out, we spot a huge school of anchovies balled up on the surface. We hung out for a bit, but nothing was happening with them. So, we left fish to go find fish. Five miles from the 209, I put the kite and balloon out and get the yummy flyer going. Put out the cedar plug as well. We troll for an hour and then come across a nice sized paddy. We pull upwind of it and clear the lines and get some baits out. I put a dine next to the paddy on my lucky yellowtail rod and begin the soak.
I feel my bait get picked up and set the hook. Its heavy! It does not run off or into the kelp like a yellowtail. It does not make a blistering run away from the paddy like a tuna. The line has not broken or been chewed through so its not a shark. It motors away from the paddy and then goes straight down and I cannot turn it or stop it or even slow it down. I have it on 25lb test, so there is not a great deal of pressure on it. Now its a waiting game.
I am thinking Opah, as I have never caught one before. Its still straight up and down, but its not taking line now. I gain some back and am getting tired. After a half hour, I hand the rod off to my buddy Doug, so he can join in the fun. Getting ready on the boat, I dig out the big gaff and tail rope set up. Doug pulls on it for twenty minutes or so and hands the rod back to me.
Another boat comes along and we wave him into the paddy. They put out a couple of baits and wait and watch. Twenty minutes later, they give up and motor by to see us still hooked up. I tell them I have no idea what's on the end of my line. They watch, get bored and then leave. I get tired and hand the rod back to Doug. Doug gets tired and hands it back to me. After an hour or so, it starts coming up. I see a flash at deep color and then its sounding again. Ten minutes later, its coming back up to deep color level.
Now the prize is getting close. After thinking about which knot would break first, its coming up. Worrying that the hook is going to pull at any minute, its coming up! We are going to get this one! I see a flash at deep color and the fish goes under the boat in a circle. I put as much effort as I could without breaking the line and pull it up. The fish comes out from under the boat and I can see my prize! Its huge! Well over a couple of hundred pounds.
Its a fricking Mola Mola!
Never had one eat a dine under a paddy before. I broke it off and left it have the sardine and hook.
Also, tolling the yummy flyer later, nothing was happening, so I had Doug drive the boat while I took a break in the bean bag chair in the cabin. I wake up to hear a rod going off and come flying out to find,
It was the kite reel going off. All the lines are in the water and I ask Doug where the kite is? He gives me a blank look and goes "Umma huh". We un-tangle that mess to find out the line holding the kite to the swivel at the end had come loose. So, if anyone finds a Eat My Tackle blue kite with pink balloon attached to it, I will reward you with the beer or six of your choice.
We later chased foamers, but got nothing out of them. Fish did not look big, but they were much bigger than anything we put in the boat that day. Weather was perfect and the company was good. So it was a great day on the water.
Picture of kite should anyone find it. 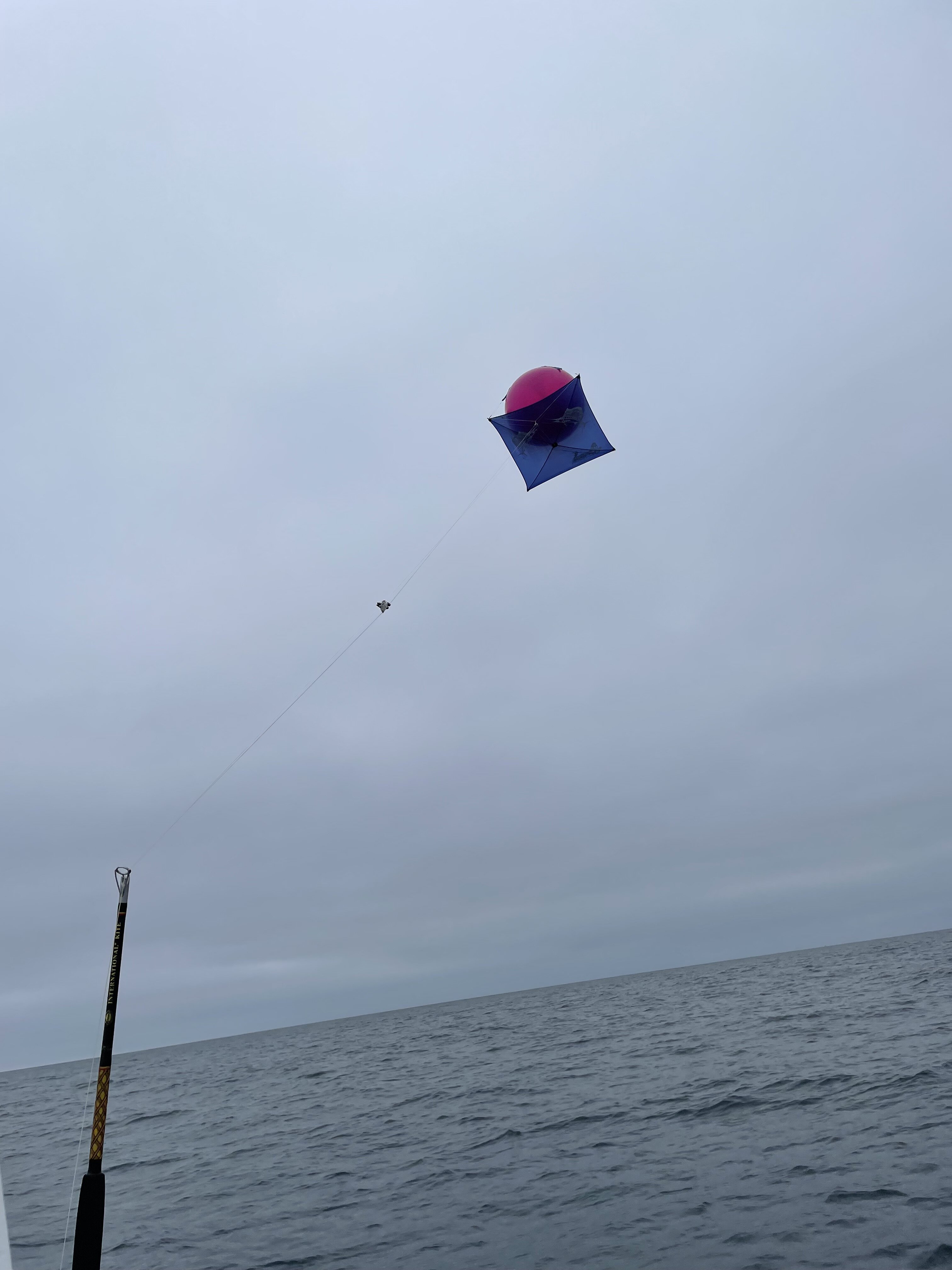 We ran to the 277 that day. Saw some fish between the 267 and 277. Some big boils and splashes mixed in with the 30-40 jumpers.
Toggle signature
Brawndo
Reactions: Otto
Upvote 0

Good effort. Thanks for the report.
Toggle signature
-AH
I get skunked and I can not lie
Upvote 0

"After thinking about which knot would break first..."

"Worrying that the hook is going to pull at any minute..."

Seriously, that sounds like the nightmare I have at least once a week - oh and being on a sportboat during a wide open bite and not being able to find my rods.

The things that keep us up at nights, my wife thinks I'm batshit crazy some times...
Toggle signature
Ain't no shame in my game...
Upvote 0

Great report and read. Yeah my guess was Mola Mola too.

"Umma-huh." Bout sums it up! I'm going to adopt that for my daily conversations if you don't mind.

Sorry you missed your tuna connections, but how many people have gotten a flyline mola? Big ocean, big surprises.

Boat
Anything that will let me on

Of all the recent posts…yours I kept on reading (although they are a good). You will be telling this story for years to come!
So really…how did the Mola taste?
Reactions: lobzila
Upvote 0

I had a hooked Mola come flying out of the thinking it was a dorado one time. Crazy!
Upvote 0

T-Tang said:
"It's a fuggin' baby whale, Jay! It looks like it's hurt. We better cwall the aquarium!""
Click to expand...

Offshore My first bft and it was over 300lbs!