So what do you do in NYC when the theaters are all still closed and no jazz Clubs are open? You head for the Jersey Shore and do some fishing. I packed up 4 rods, a cooler, kosher fried chicken, and some tackle and took the 11:07PM train to Bellmar, which arrived at the docks at 1:05AM. I went to the boat and tossed my gear on the deck, then followed the dock to the beautiful bar and dining facilities that was still roaring like the 1920's. I had a few beers, and at 3:00AM walked down the beach, which was quite busy with walkers on the boardwalk. It's a nice little beach, nothing like Coney, Island, but clean, and well maintained, and the police station is right on the boardwalk.


I turned around, headed by to the docks and stopped at the 24/7 7-11, picked up some water and soda, and headed back to the Bellmar Princess, which is the boat I was booked for. To my surprise, there was already dozens of people jockeying about for the best spots on a variety of the boats. I nodded for about 2 hours, when a mate showed up at the boat, about 5:30AM. We exchanged greetings and I took a choice spot on the stern of the boat, in the starboard corner. By 7:30AM the boat where decently packed, within the COVID-19 regulations. The boat was scheduled for blue fishing, and a Mexican family boarded the boat with young children and loaded with jigs with treble hooks. They caught a lot of blue fish, but children and treble hooks is a deadly combination. Sure enough, a 2 year old daughter got a treble hook in her hand which the mates needed to cut into pieces to remove from her hand. It is extremely stupid to allow children on the deck with swinging jigs, especially treble hooks, and this situation could easily been much worst, and it wasn't pretty to begin with to hear the child screaming and the mates gathers around her trying to remain calm until the situation, fortunately, resolved. The Mate on the Bellmar Pricess, Billy, is an experienced on salt dog and experienced with hook injuries, with the skill of a nurse. He is the reason I return to this boat again and again.


Despite the hysterics, I had a good time using my new stick, a Hercules Seeker, outfitted by Michael Chow. It was the first time I had used it and it has a new Fuji Painted book seat holder. I fitted it with my faster Torque 12 Star drag, and the reel didn't sit well in the housing. It got loose with a fish on, which could be disturbing. Bill brought over a pipe pliers and tightened the reel to the seat. I will need to look at this more closely. It seems that the paint is interfering with the seating's. I'll see what happens going forward. I still took in 4 blue fish and dropped many more. This boat is high off the water and this new rod had bring spring in it. Blues popped off and the pole recoiled twice on my before I finally started to learn the pole and get things under control.


The boat had a lot of blue fish, some Spanish mackerel, albacore, and then we switched off to bottom fishing. That is a skill I know well, and I hit multiple Black Sea bass, and a very nice ling. Overall, I have a lovely take and my bottom fishing was the envy of the boat. I shared a few fish which soothed ruffled feathers, and then we headed home. 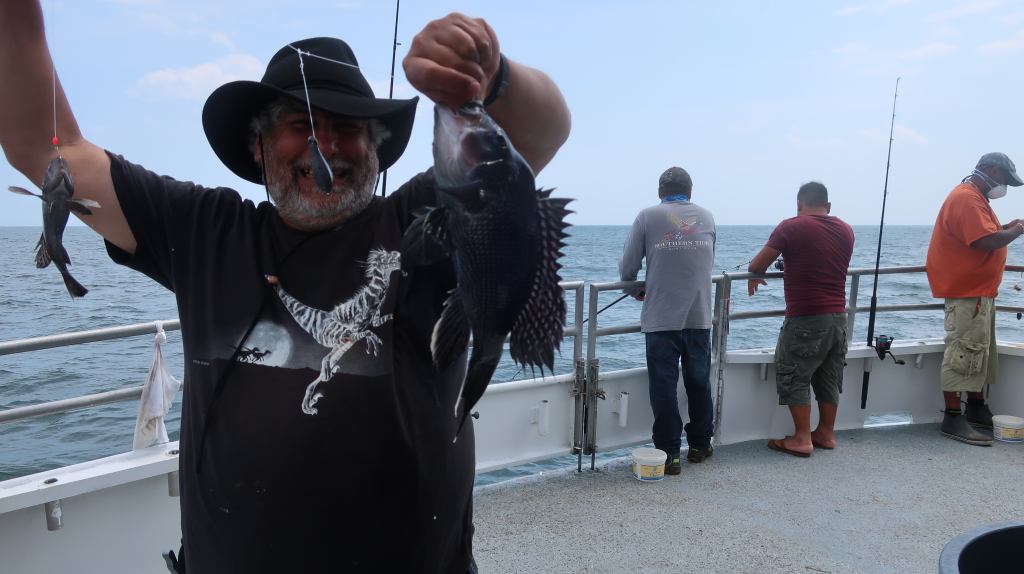 One Happy Double Header
Bellmar's party boats in the Shark River estuary, and when I arrived at the docks, it was high tide and the water level almost up to the dock. I'd never seen that before and it seems like a guaranteed way to get flooding. The piers at Sheepshead Bay are several feet below the average high tide and you need to step down the stairs to reach the boat. It makes it a little harder to get on the boat, but it is much safer for the community, which will suffer from periodic flooding. The boats are also backed into the dock, a difficult maneuver in my eyes, but it makes boarding very easy. The estuary is behind 3 draw bridges and when the boats leave in the morning, they do so in a parade, until there reach the open ocean. Along the parade route are many homes, and fancy edifices, and lot of small boats enjoying the water. Check out the morning parade out of Bellmar:


Boats heading out to the ocean in the morning from Bellmar, NJ
There also seems to be a ritual parade of dogs at the Dock in the morning. I've seen this before, and it seems almost like a fishing dock tradition that the local dog walkers can bring there dogs to the docks in the morning and Fido get a treat.


Its a dogs life - every moring at the Bellmar Docks
Overall, this was a terrific Sunday trip, and much better than the zoo that exists on Sheepshead Bay. Conversation was easy, and drinking was moderated. The Cabin on the Miss Bellmar is enormous and air conditioned. More than a few passengers spent there day cooling of in the cabin. The upper deck is a lounging area and some children were up there, with mom, kids, and young adults sunning themselves. While all that was going on, the boat was sailing in the Klondikes, and we were clobbering the blue fish. Over 100 Blues come on the boat. And even the captain as impressed with the fish.

Spanish Mackerel on the Miss Bellmar
At about 3PM we arrived back in port. I grabbed my gear and ran off to the railroad station. At about 3:40PM, the train arrived and at about 5:50, I was at Penn Station. I looked at my watched and realized I could take a cab from Penn Station, directly to Pier 6 on Emmons Avenue, and enjoy an additional night of fishing. And I did just that. We hailed a cab, and headed through the tunnel, up the Prospect, and down Ocean Avenue to reach the docks at 6:41PM, more than 15 minutes before the Marilyn Jean IV was ready to pull out for its night trip. That night trip itself one one for the ages.

So when I arrived back at Penn Station in Manhattan, the file was about 5:30PM and I had relized that if I hop in a cab, I could make the Sunday Night trip on the Marilyn Jean fleet. I got out on the 8th Avenue exit, carrying a small cooler of fish, 4 fishing poles and a messanger bag full of gear. At that point, I was fairly loaded and tried to find a cab with enough room to handle my poles. This wasn't easy and the city taxi attendent at railroad station was of little help. In fact, he gave away the cab I needed. Finally he fished out a cab that could take my gear. The problem is that the poles are long and the cabs now have plastic divders to protect drivers from COVID-19 (More Bullsht).


I hopped inot the cab and a West Indian fellow was driving and he asked me the address, and I told him Peir 6 and emmons Avenue in Sheepshead Bay Brooklyn. He couldn't find it on Google and he couldn't spell Emmons, and I got flustered because the clock was ticking. We came to an agreement of $60 for the ride, including the tip, cash, and told him to just drive downtown, and use your eyes, and brain and forget about the damn GPS. He did so, and we finally hit the West Side Highway, and took the Battery Tunnel. We negotiation about the route, and settled on the PRospect Expressway and taking Ocean Parkway to Avenue N, and then into Ocean Avenue. Ocean Avenue the damn 25 mile an hour speed limit was the slowest part of this. Getting from Kings Highway to Emmons was a major difficulty. Meanwhile, the driver and I chatted quite a bit and finnaly when we arrived, with 20 minutes to spare, we were friends, I paid him his $60 cash, and we hugged, and I got on the boat. 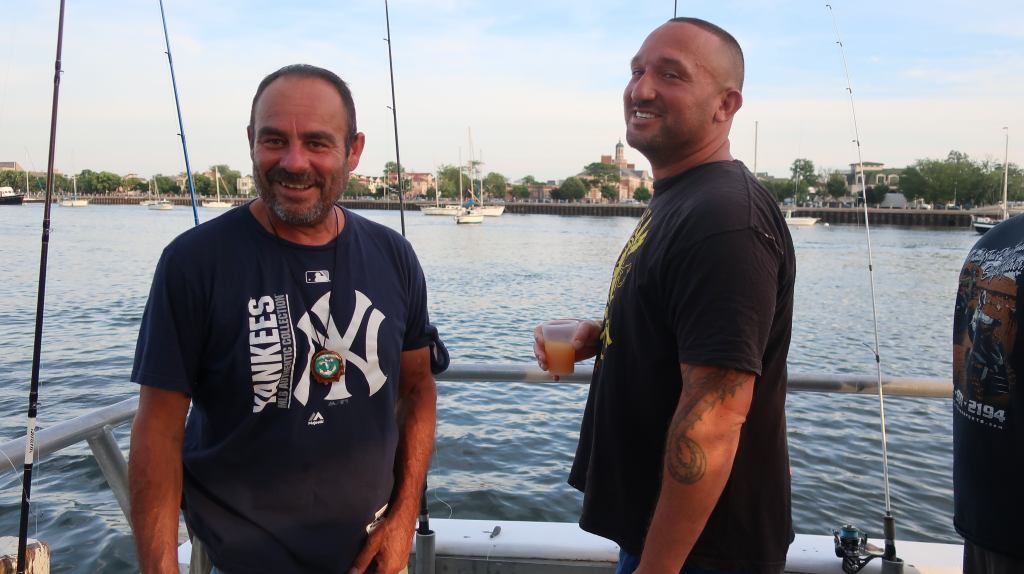 Albert and Ralfeal on the Stern of the Marilyn Jean IV
I wanted to tell them all about my exciting adventures in New Jersey, but frankly, nobody was interested. But Ralf came stacked with bait, which was nice. Then Mickey showed up. Jessica and Louie, two more regulars, showed up at the boat, and a fellow named George, another semi-regular. So we settled into the boat, and Pelican, the Marilyn Jean Captain, set us a sail to the tin can grounds. When we stopped on the spot, we immediately started hooking up with big vampire porgies on shrimp. These fish were pushing 14-16 inches, and biting hard. Lead by Rafeal, we had them in a frenzy for the next 4 hours, and loaded up with a huge quantity of dinner plate sized porgies. We had them hitting on shrimp and worms, and then as the nigh wore on, the got a little finicky and would only take worms. To cap off the night Rafeal pulled in the largest Porgy Double Header i had ever seen. He wouldn't let me take a good clean picture of it. But we had a streak going of 4 of my last MJ trips, we kept hitting the biggest scup I had ever seen, night after night, going from 17 inches, to 18 inches, to 20 inches, and Ralf continues this street with TWO 20+ inches, the biggest being about 22 inches. This was the best photograph I could get of it, because it disappeared into the buckets. 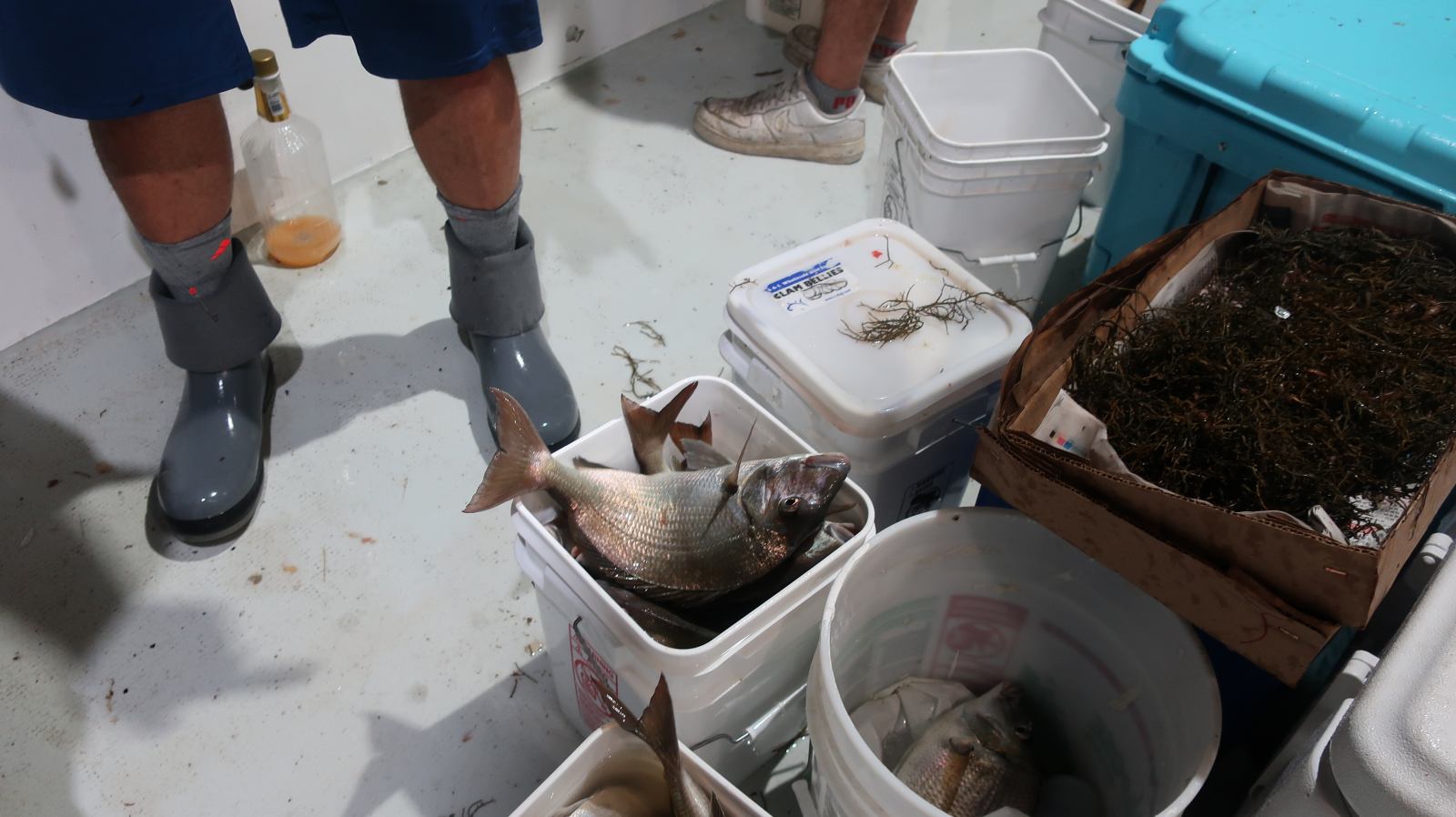 Yes - that IS a porgy a good 4 inches bigger than diameter of the pickle bucket.
We limited out the boat, and finally sailed home in triumph on the biggest Porgy Night I have ever seen. We could have fed the homeless.
Toggle signature
http://www.brooklyn-fishing/
Reactions: azbaseball
Upvote 0

Nice write up. Very efficient day of fishing. Any issues with getting the gear on the train and in the cab? I used to fish and crab the Jersey Shore from the Highlands down to LBI. Many good times out of Pt Pleasant and Belmar. Still have family in Jersey and usually visit every summer. Not this year for obvious reasons. Thanks for the report.
Upvote 0
Show hidden low quality content
You must log in or register to reply here.

Brooklyn Inshore Fishing is heating up

Cod and Ling dominating the NY fishing seas this June, with occasional Stripers showing up in Jamacia Bay at night.