What do you guys think are the best trolling speeds for
Ceder plug
Rapala X rap
Feathers
And any other rig you can think of. Consider weather/ sea conditions and type of fish.

First, understand that I live in Oregon, and catch a lot of Albacore. Not BFT, not YFT. Then, to answer your question:

I've caught more Tuna trolling a ceder plug then all my other lures combined.
I was out the other day with a decent swell it was hard to keep a steady speed every time I went up a swell I slowed down and when I went down the front of a swell I spead up. At 5 kts I would go from 2 to 10 and back with every swell unless I was running parallel to the swell witch made me nervous.

6.5 mph. Everything bites at that speed!

I used to go by the theory that when trolling feathers (and I always put at least one cedar plug long) for tuna, the faster you went the better, since you cover more ground and won't outrun a tuna even at any realistic trolling speed, so the limiting factors were 1) keeping the feather in the water most of the time, and 2) not running my boat even close to the speed at which the boat starts to plane -- too fuel inefficient. The first concern can be addressed by positioning the feather on the face of the boat's wake, but the second is really a function of boat size (or actually, length at the water line). Anyway, that approach worked well for me for a number of years, particularly about 25 years ago when I had a boat that, due to its relatively short length at the water line, was limited to about 6.5 - 7 knots. As my boats got bigger over time, my trolling speeds increased, and my success went down. My current boat is long enough that I can troll very efficiently at 8.5 to 9 knots, and I tend to average 8.7 knots. But, I am catching far fewer fish. Only recently, I had an epiphany that it may be that I am trolling too fast. So, the next time I go out, I am going to try trolling at 6.5 to 7 knots. I suspect I will catch more fish.
Last edited: Jul 14, 2019

Something weird is happening.

Not sure what I did wrong to create multiple posts.

Since the sea is not a flat highway, it is impossible to maintain a constant over-the-water horizontal speed -- and that is a good thing. Speeding up, slowing down, moving the boat's heading slightly left and right as the waves push the bow, all add motion to the following lures and increase their attractiveness.

But I think that Rick is right, it is easy to go too fast. Pulling cedar plugs and feathers and other lures running right at the surface is a good thing, but I always want a diving lure in the mix. When I am on a sportfishing boat with the other people using the boat gear, which is almost always surface Zukors or such, I put on a Halco 130 behind a weight so that I am going to be several feet lower than the others trolling. And I usually get bit first.

surfgoose said:
Since the sea is not a flat highway, .......When I am on a sportfishing boat with the other people using the boat gear, which is almost always surface Zukors or such, I put on a Halco 130 behind a weight so that I am going to be several feet lower than the others trolling. And I usually get bit first.
Click to expand...

How do you rig the halco with weight? Inline torpedo sinker ahead of it?
Reactions: surfgoose

I have a chrome marlin-lure head with big swivels at both ends, weighs eight ounces, and I run it about two feet in front of the Halco 130 on 80# fluorocarbon. I replaced the treble hooks of the Halco with singles, it didn't affect the movement of the Halco and makes it a bit easier to store in the tackle box. Plus it is easier to release an unwanted small fish. 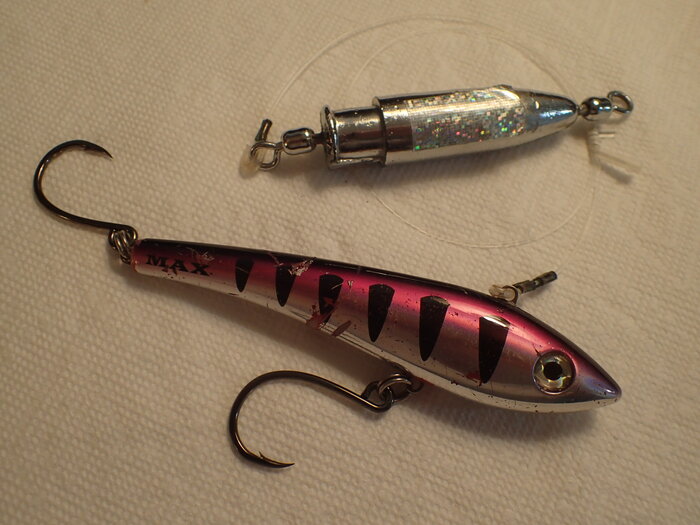