Another scorcher out there today so hopped on the Triton out of LA Harbor. Captain Shane was driving. Mike on deck and Nick in the galley. We left the dock with pretty close at full load of 25 guys I think. Short trip to the bait barge and we filled up with a nice load of 4"-8" dines. Shane said that the bass were biting the leadhead and squid just as well if not better than the dines so setup accordingly. Hit the rack and in a couple of hours we were at the island. 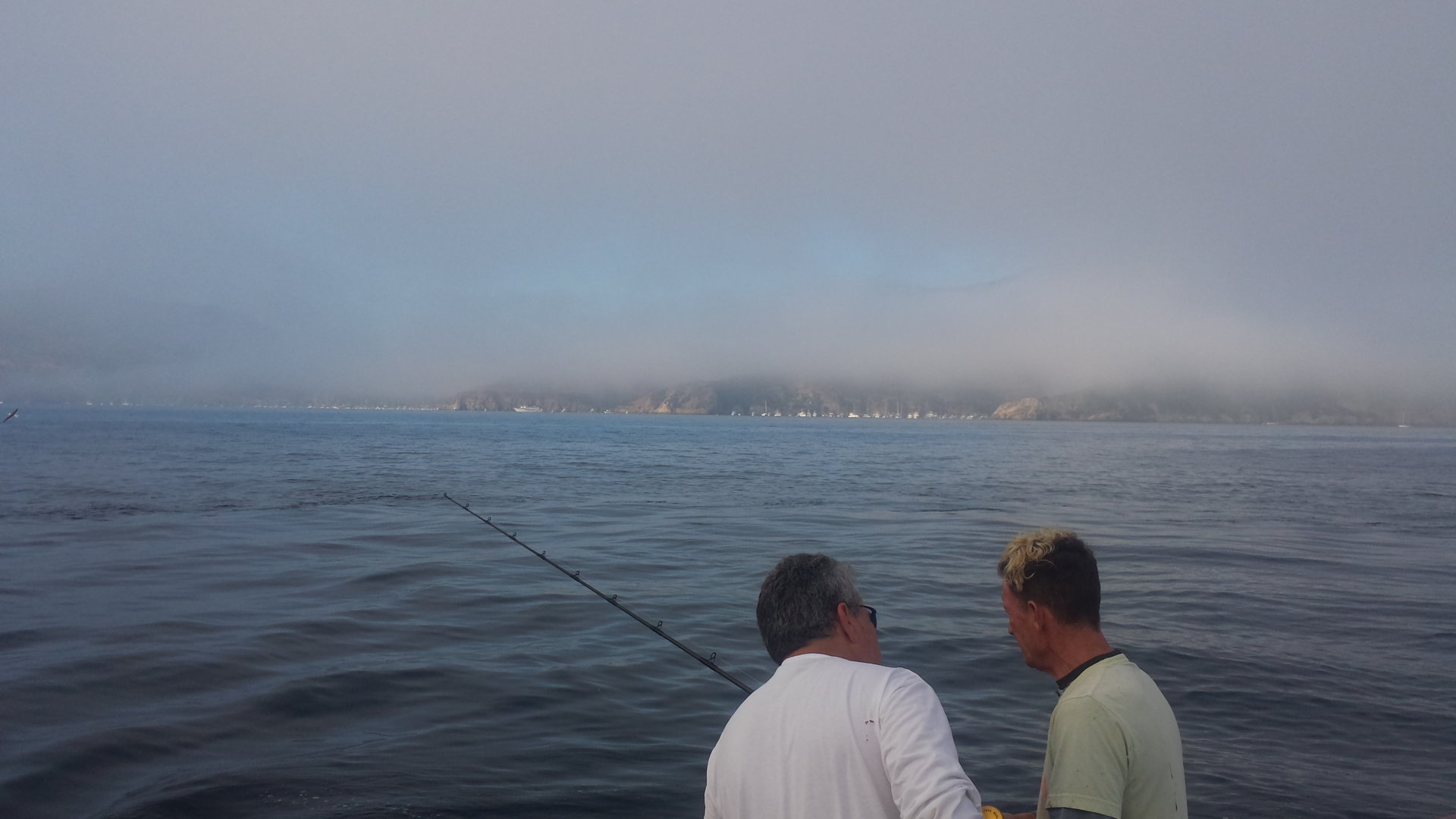 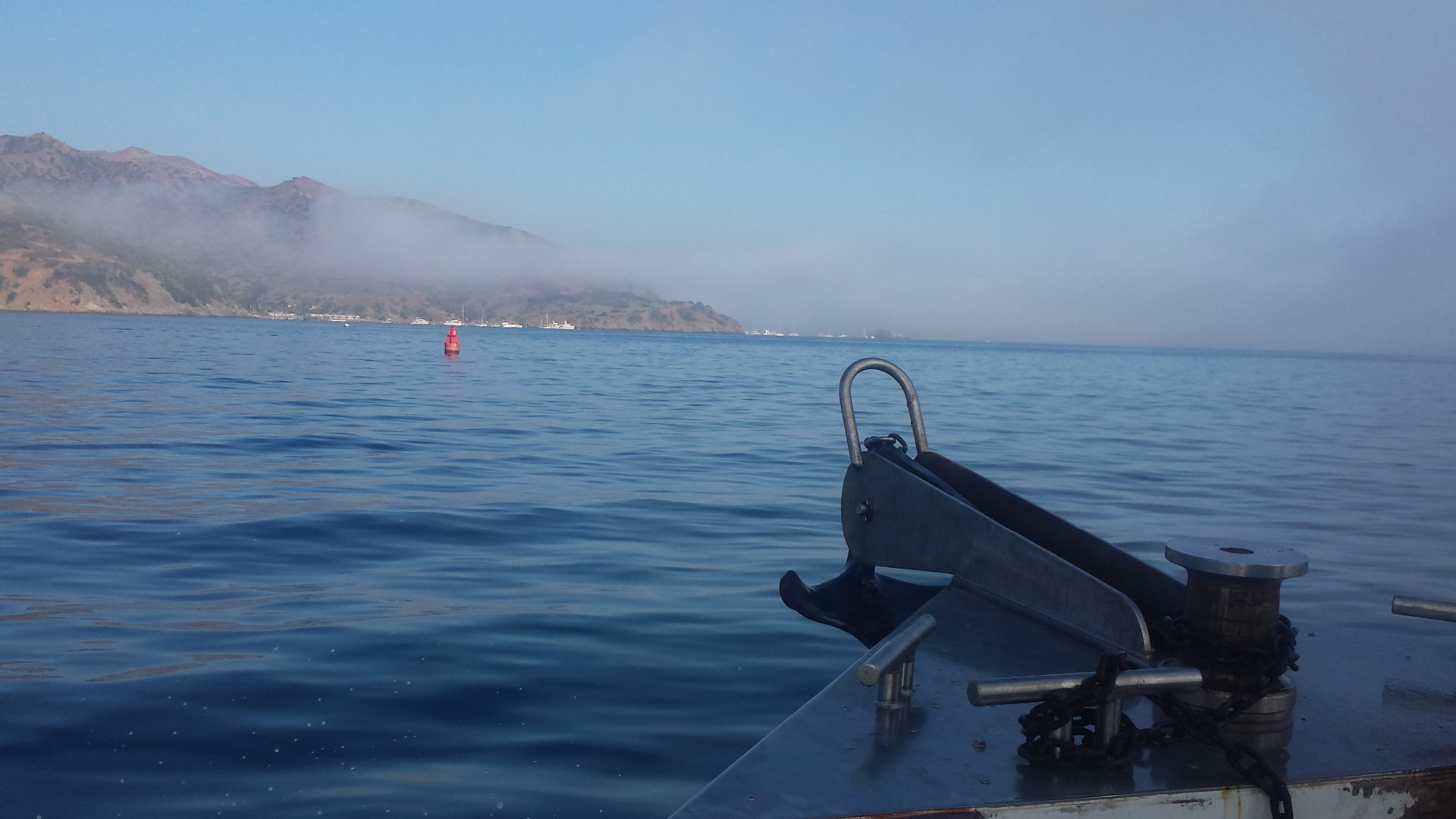 Shane set us up on one of the reefs and it was game on with the calicos. Lots of nice fish coming over with most of them coming on the squid. Imagine that
Fishing was great but I was on the struggle bus as far as legal bass go. We had 2 milk crates filled up before I caught my first legal fish. 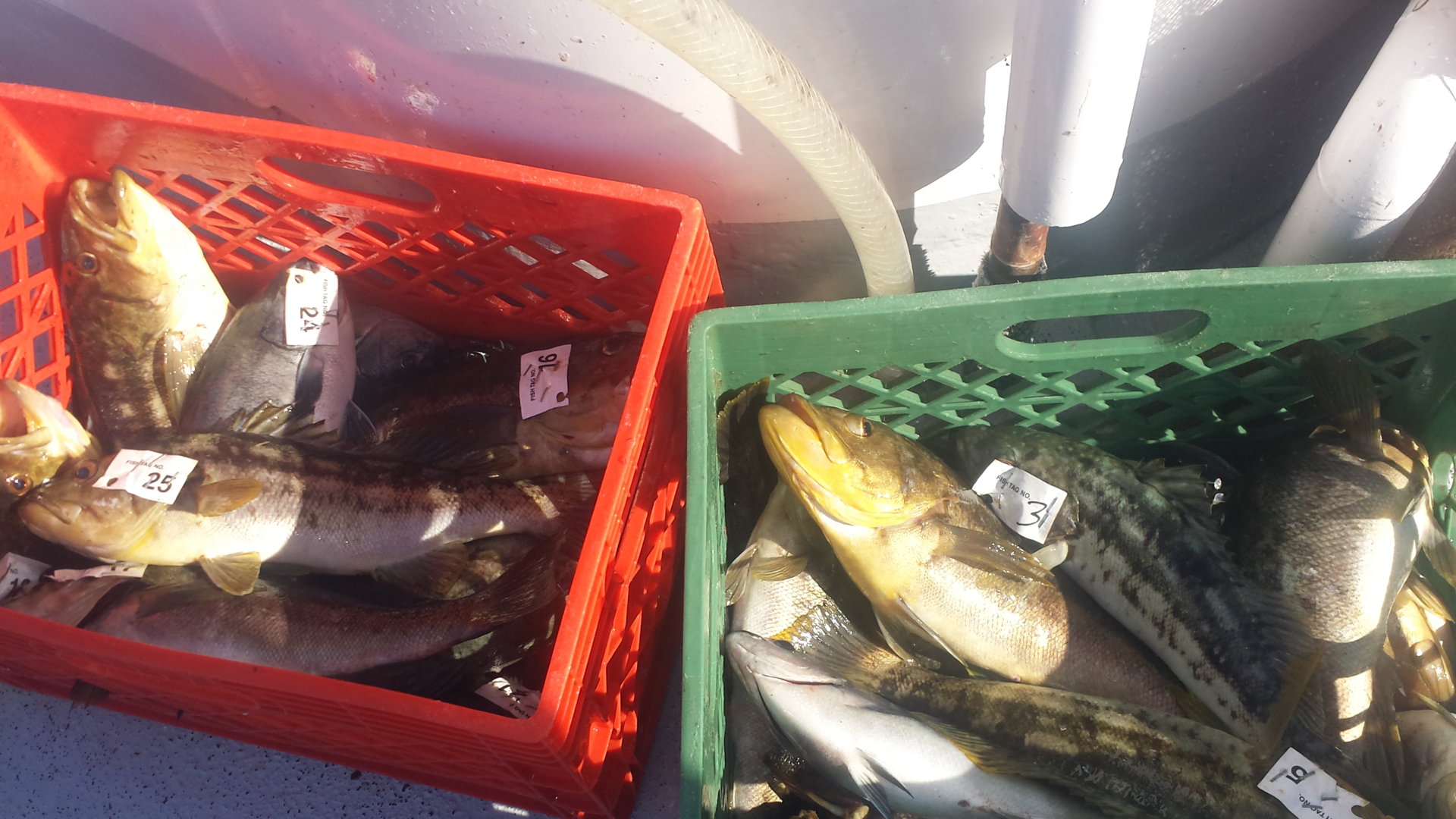 Mike kept the fish watered down and soon dropped them in the RSW for a cool down. 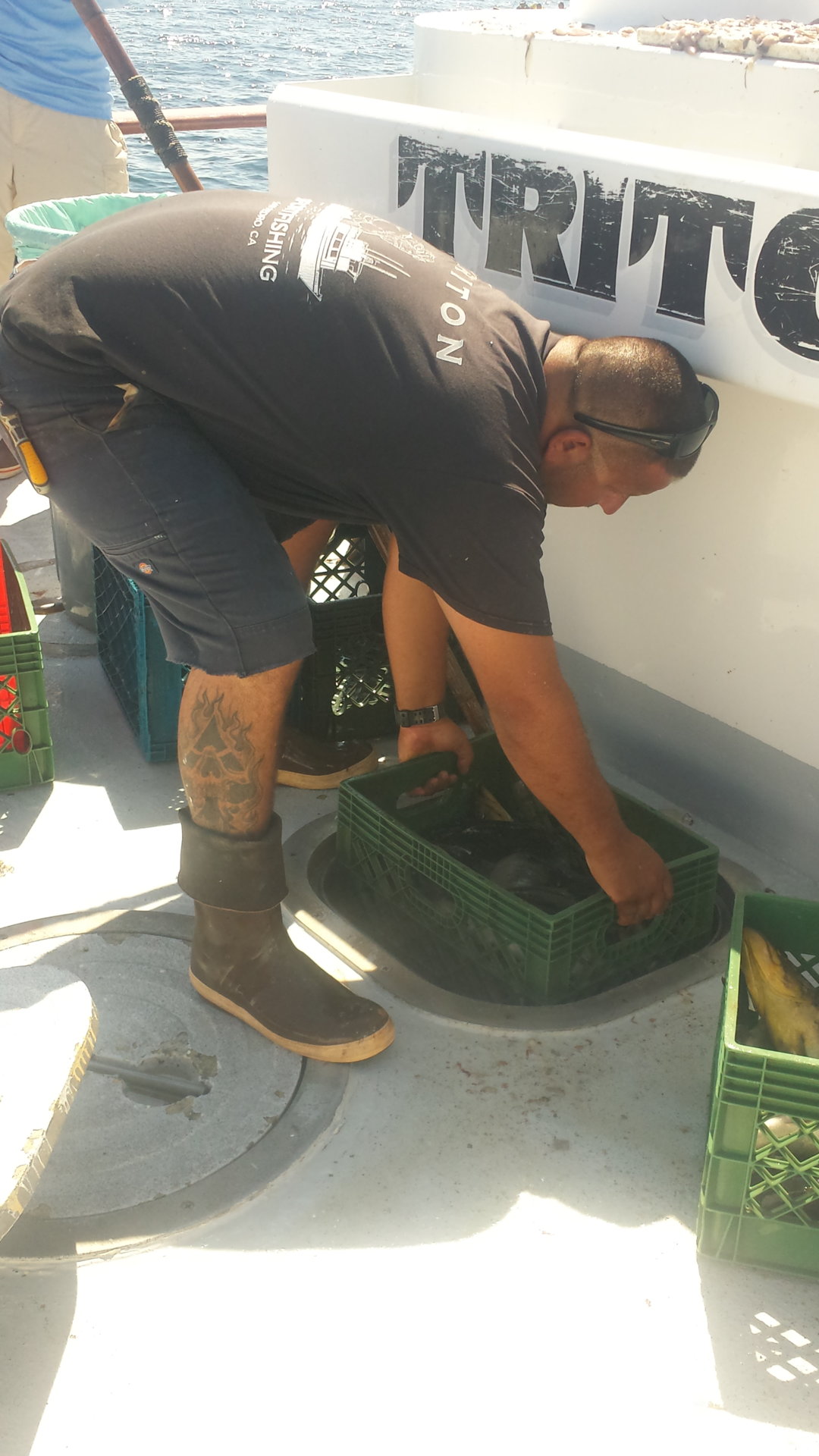 We hit a few other reefs and everywhere Shane put us, the bass bit. 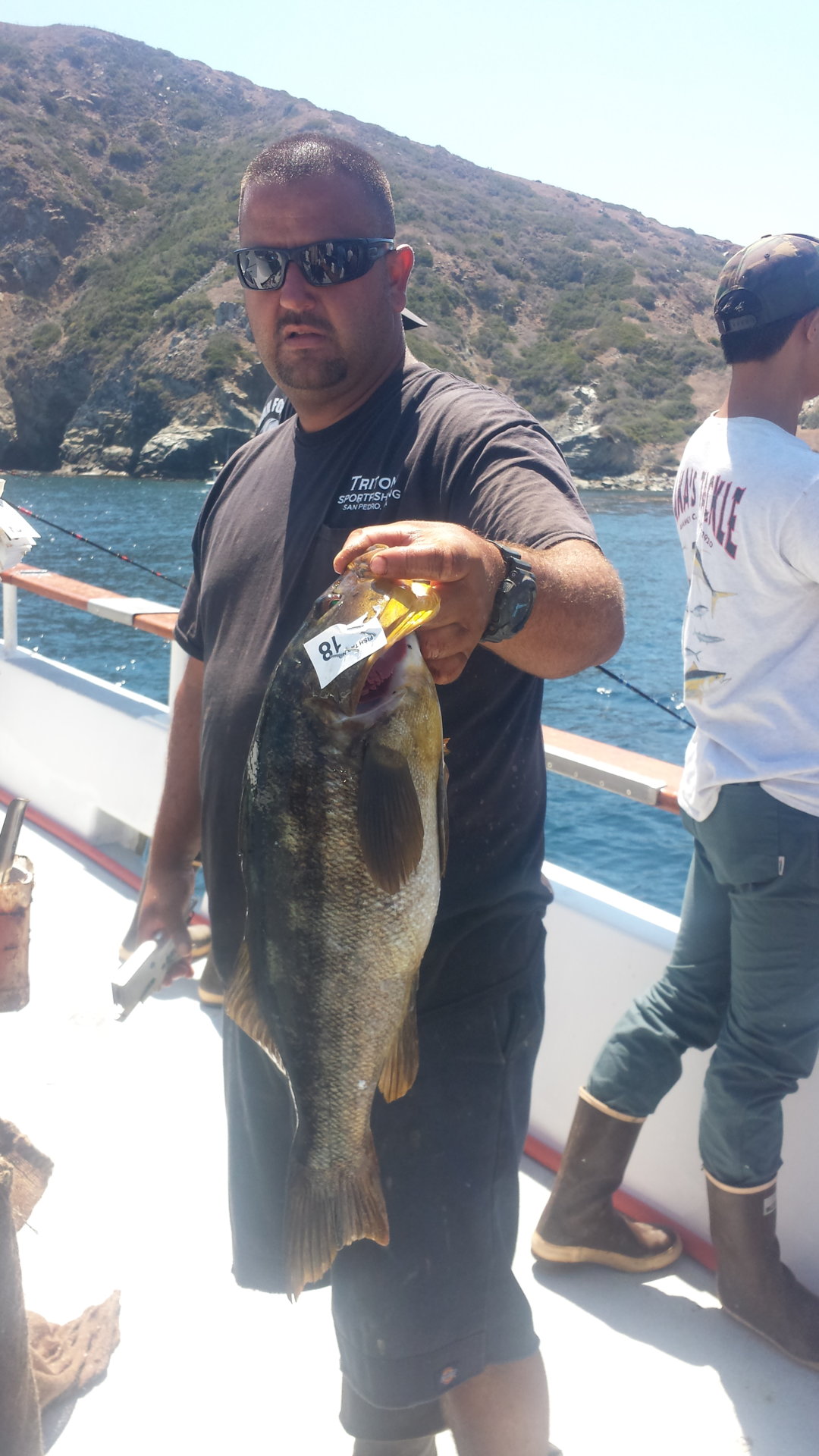 Even caught quite a few on the Hookup bait with 3 being legal. 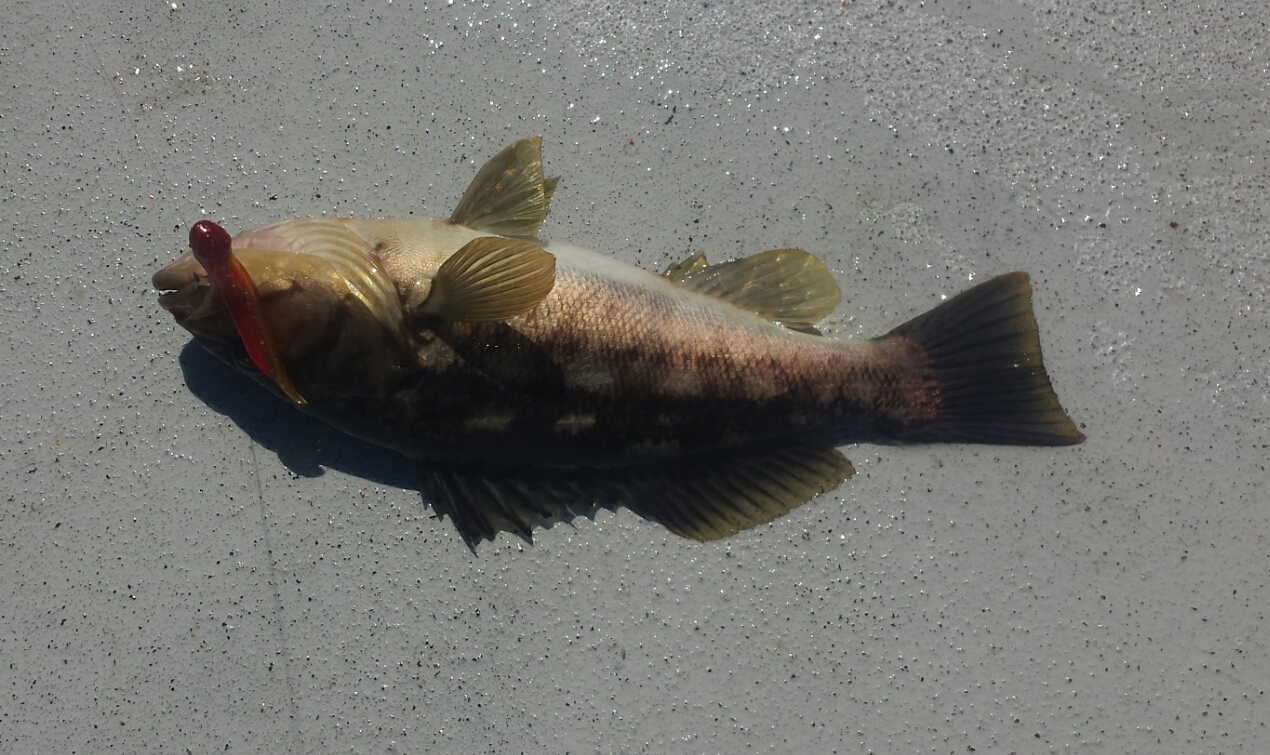 While on one of the shallow reefs, a guy hooks up on a yellow ! Up the side of the boat he goes and soon the yellow finds the reef . Yellows-1/Anglers-0. We drive up the island hitting several other spots. The weather was beautiful with a nice breeze at times and even though it got hot at times, it was nice most of the day. 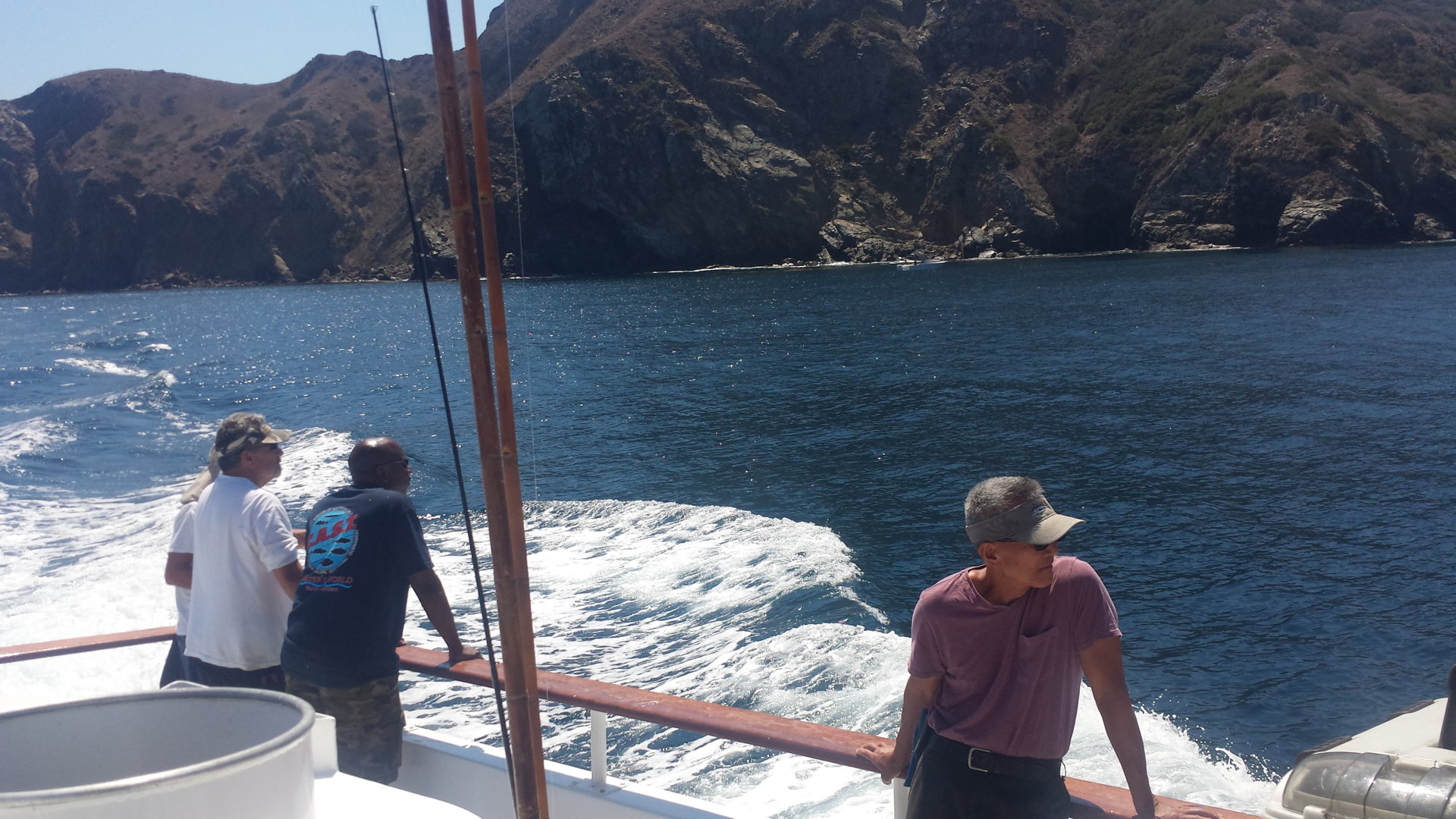 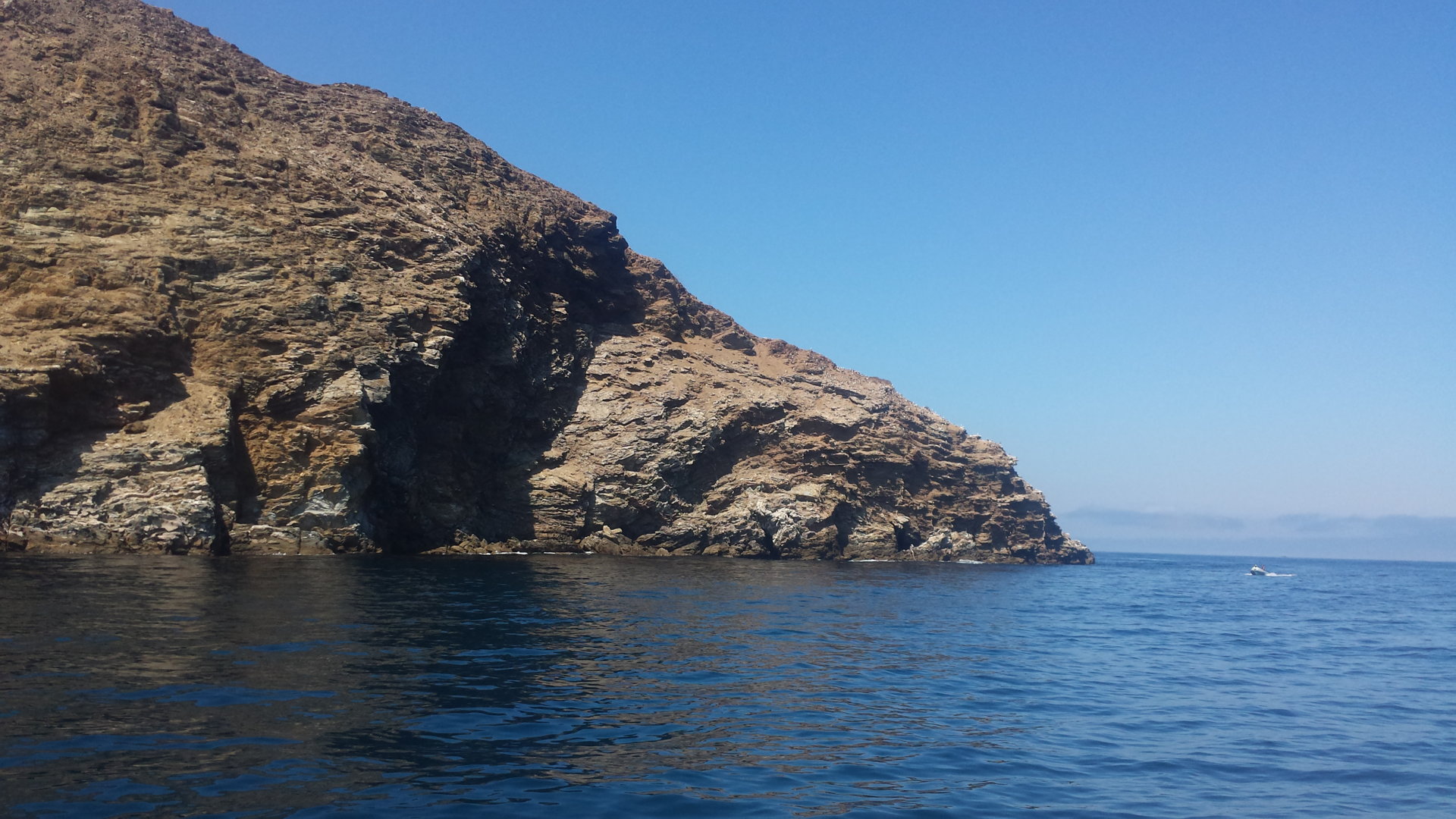 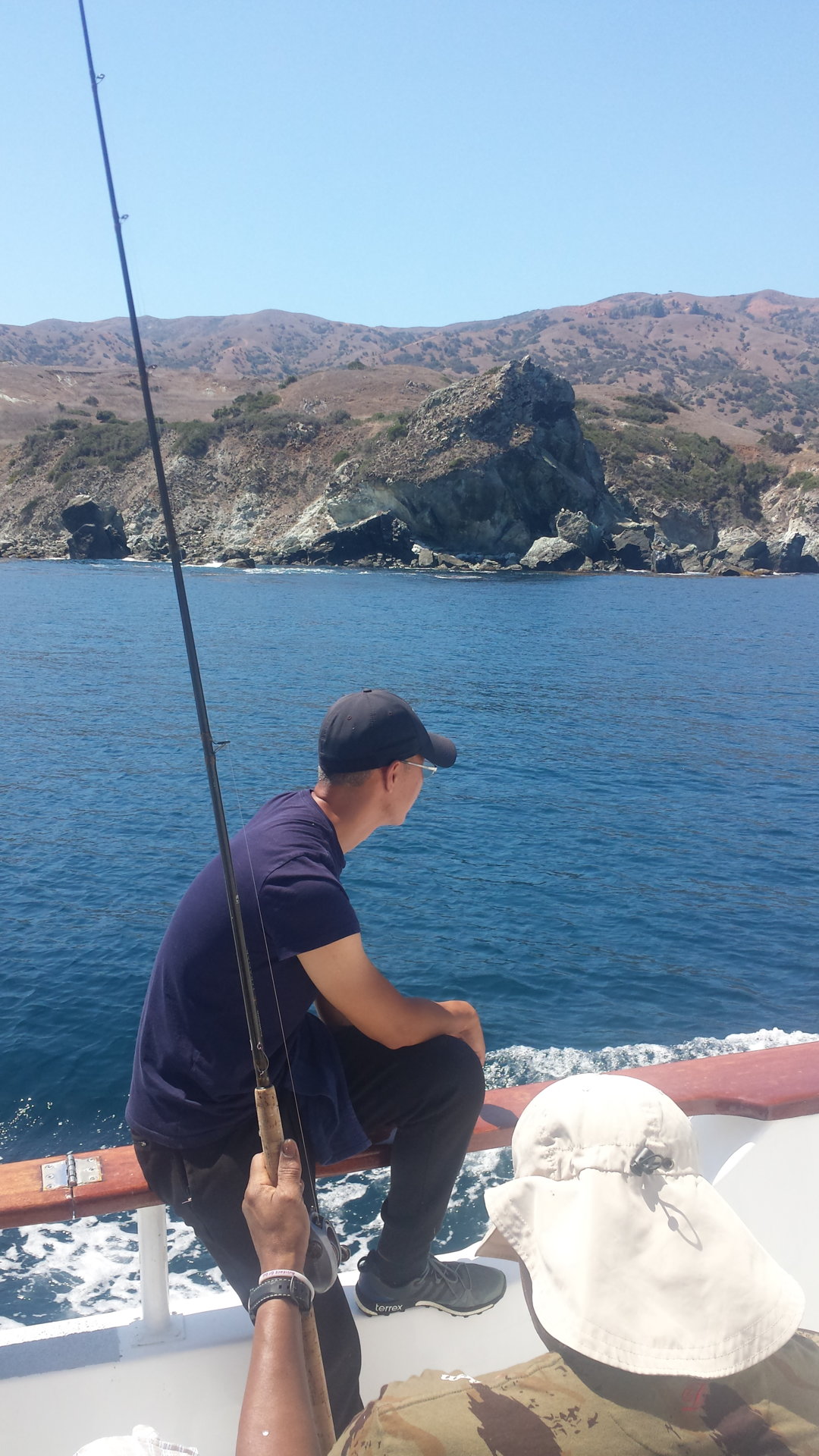 Towards the end of the day. Shane went to one of the deep water reefs to look for the yellows. "These fish are big and mean so you have to pull guys !" I grabbed my 30lb outfit and got ready for battle. We anchored up on the spot and the birds were all around dipping. The fish were here ! So were the seals unfortunately. They were ravaging the baits. Heads were coming back left and right. Finally I got lucky with all the seals on one side and I tossed a dine on the opposite. He was a lime green swimmer and took off. He got thumped real soon. Fresh One ! The fish took off on a long run but I was able to stop him and started working him to the boat. I heard some yells on the other side of the boat. "Yea turn the handle !" "Two goin.....Three goin !" "He's goin for the reef!" Aw! "Two goin...Damn! Back to one!" I was still on my fish and he was going up the side of the boat (the right way). He was really digging trying to get his head down but I was holding him pretty good. As I went up the side following the fish, I approached 3 guys tangled up. No! Shane was there and He had to take my rod and drop the tip to go under and around the obstacle. The fish saw his chance and made a dash for the bottom. As soon as I got my rod back I could feel him in the structure. Gone !

Broke me off with 3 feet of shredded flouro where the hook was. Yellows-4/Anglers-0. Retied and got back in the water. One of the guys who lost a yellow earlier came tight on another one in the stern. He got straight smoked on 30lb. Down on his knees with his rod straight up putting all the pressure he could and he never got one crank. "He gone !"

And that was our final score Yellows-5/Anglers-0

At that point we had 6 seals around us scattering our hopes so we took off. Hit another reef for a few more bass and then headed home. 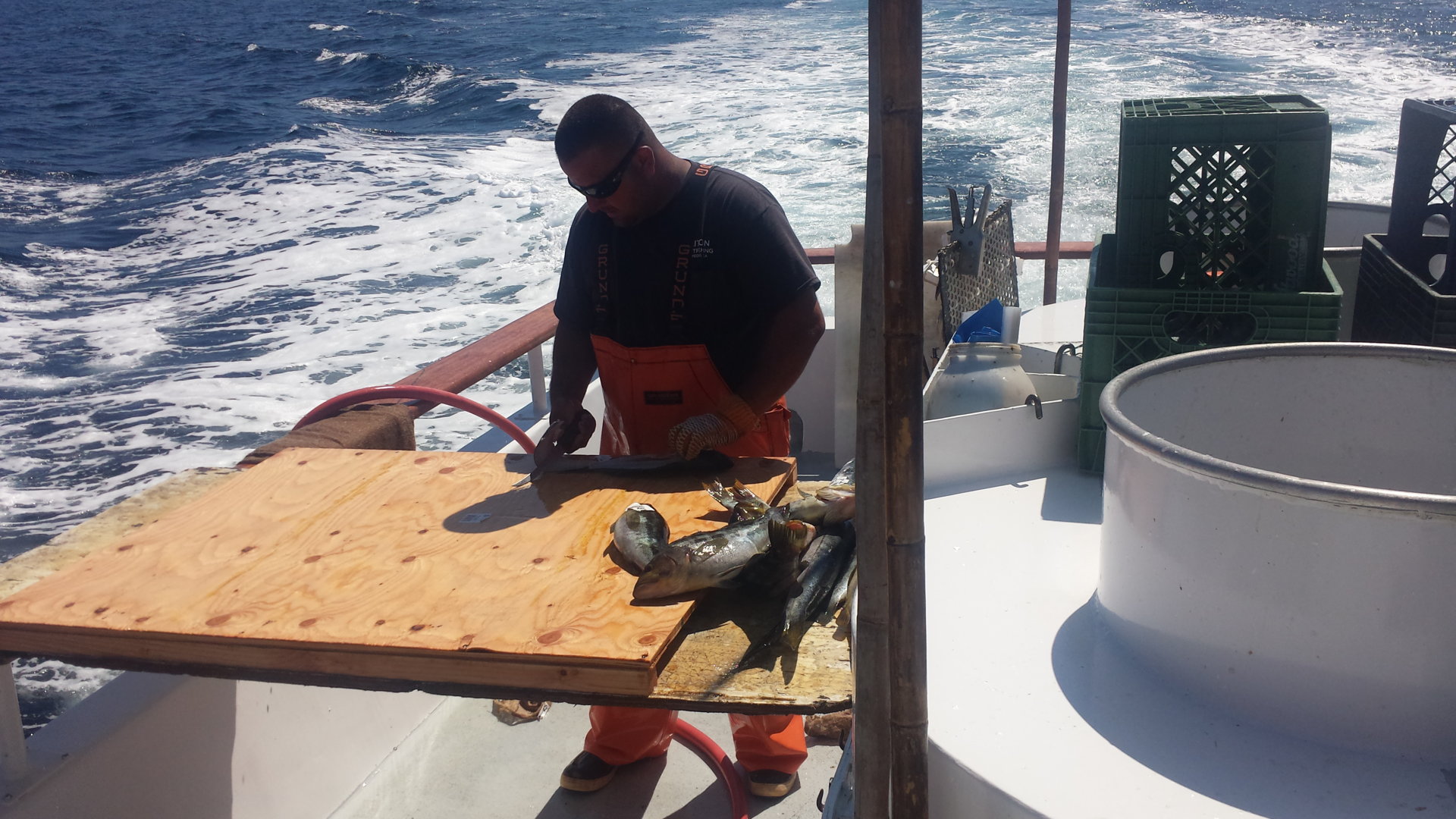 Despite our disappointing showing, It was a great day. Beautiful weather and the bass fishing continues to be the best it's been for years. The boat and the crew were great ! Shane put us on fish and we had our chances so you can't ask for more than that. Mabye 40 lb next time Ha ha. So go get um guys! They are out there !

Ain't stopping a homeguard YT with #30 on a pinnacle.

This type of fishing is not for the fainthearted.
Last edited: Aug 8, 2018
Reactions: mhanson59hb and Bottom Line
Upvote 0

the SLIDER said:
Ain't stopping a homeguard YT with #30 on a pinnacle.

This type of fishing in not for the fainthearted. 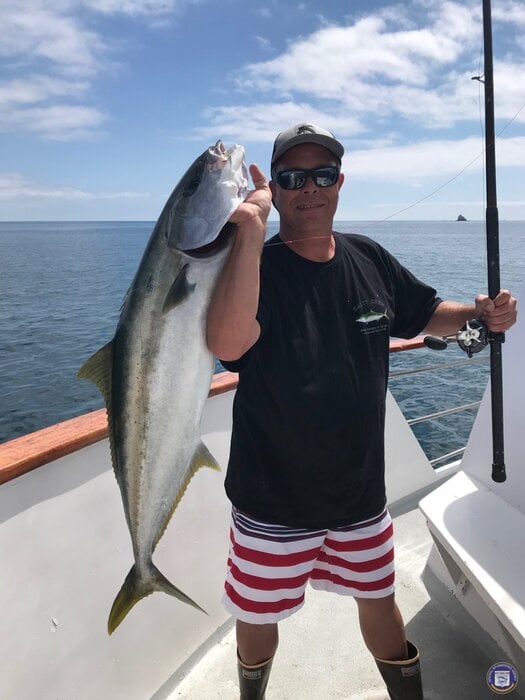 Thanks for the report. Sounds like a Farnsworth homeguard? If so, min 40# with the drags hammered down. Then be ready for a crazy ass tug of war. Good times!
Reactions: streetnfish
Upvote 0

Nice! The bass has been full speed.

I took my GF to Catalina Saturday on her first fishing trip and we caught 40+ bass on sardines or dead squid and about 7 cudas but no yellows for us.

Looks like Eagle Reef? Been some good fishing out there lately 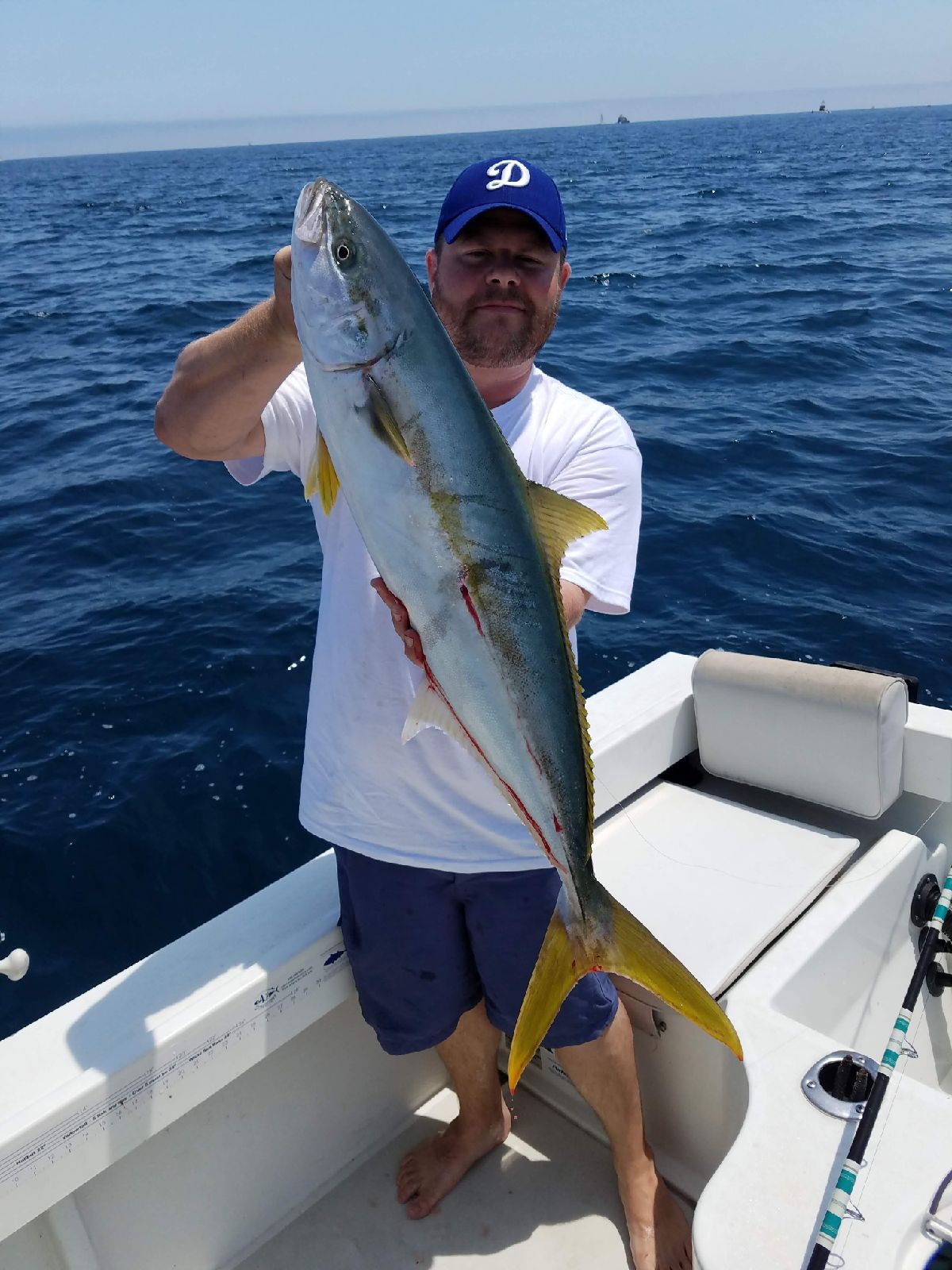 Definitely was good times. I've never had a bad day on the Triton or the Gailforce. Some days had more more/less fish but always good times