So I contacted Vince at American Tanks in SD for a quote. Best deal so far. Waiting on a second quote for the glass work. Here I have measured/marked the stringers and bulkheads for the first phase of the tank removal. Does anyone out there have a recommendation for a shop that could do the final phase of the tank instal/glasswork? I’m located in Ventura, but am willing to trailer the boat as far as SD for the right shop.
Upvote 0

Cut the decking and pulled the tank today. It wasn’t all that bad of a project. The hardest part was making sure I had the stringers and bulkheads marked appropriately before cutting. Tank was in surprisingly good shape for being 28 years old. 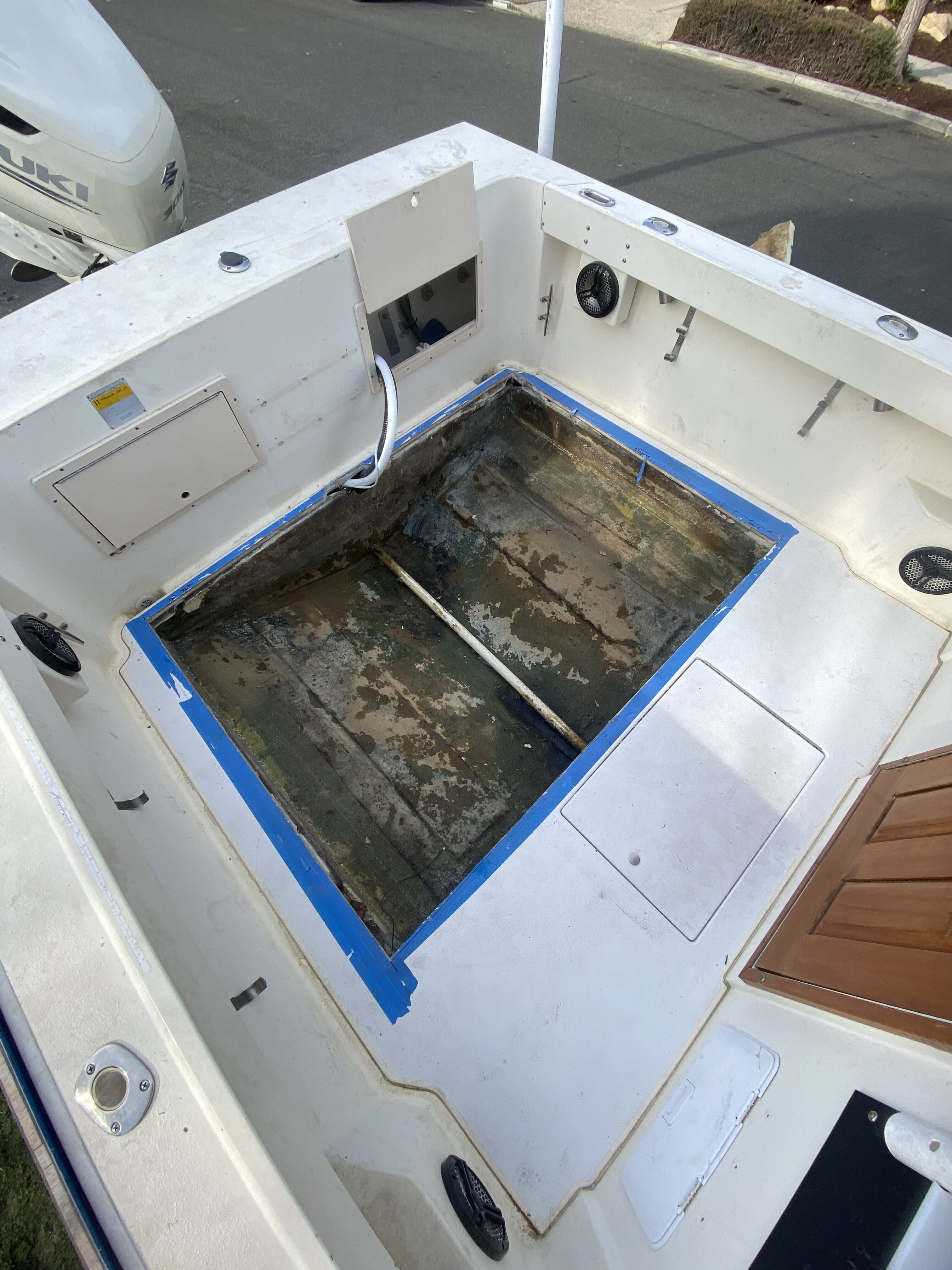 No fuel leak but discovered lots of water in the foam. Stringers and bulkheads of the coffin are solid which was a relief, but found some de lamination on both of these paralleling pieces of glassed in plywood. Im
Not sure what to call them, are they another form of a stringer? Either way they will definitely need to be replaced and glassed over again.

Anybody have experience with this repair? I will probably have my fiberglass guy do the work but I’m curious how big of a project it will be. Making the best of my boat being in “boat jail”, installed some seadek flooring I’ve been holding onto. I also have some flooring for the cockpit but obviously I need to wait for the tank to be installed first. Also prepped the fuel tank coffin. Removed the water logged base pieces and sanded the area for new glass work. Reactions: repo805, i snag for food and CODE RED
Upvote 0

Just picked up the new fuel tank from Vinnie at American tanks in SD. Wow, this thing is a work of art! Can’t wait for the instal. Installed the new fuel tank a few days ago. Wouldn’t recommend doing it by yourself but it really wasn’t that difficult. Decided not to foam it in or use the coal tar epoxy. Lots of mixed reviews on this topic but I’m happy with my decision. Dropped the boat off yesterday to have a pro glass the original decking back in. Fuel tank instal is now complete! Very happy with the results. Initially, I was quoted 7k for the removal and installation of the tank. Plus another 3000 for fabrication/shipping of the replacement tank by the original manufacturer (RDS). This was all with a lead time of 4 months!!! Instead, I did most of the work myself and had Vinnie at American tanks fabricate the tank. This was all done in about 2 weeks. All said and done it costed me 5800. I saved 4K from the initial estimate and learned a lot in the process. Couldn’t help but lay out the Seadek flooring. Not installed yet but you get the idea Thanks, can’t wait to get it fully installed!!!
Reactions: anemic, tranandya and usmc_reyes2007
Upvote 0

How much total do you have into it so far?
Upvote 0

bobafet1 said:
How much total do you have into it so far?
Click to expand...

AllzGood said:
So a lot has happened in a very short time frame for me and poor Tranquilo.

First, I started having major power loss at WOT with my 2018 Suzuki 300 with only 180 hours. It took almost 2 months for Suzuki to identify that I have 2 scorn cylinders. My symptoms are likely the result of the variable valve timing adjusting to the poor compression. They then told me my warranty is no longer through suzuki but covered by an extended warranty company (Cornerstone United Inc.) I am currently in the process of filing a claim with them. Wish me luck.

Second, is an issue I knew I would be facing sooner than later and that is my 28 year old fuel tank. I started getting water in my fuel but no fuel smell. I found I was missing the loop in my breather hose so I assumed this was the culprit, then I failed a leak down test. Because my boat is more than likely in boat jail for the rest of the season I am more than likely going to bite the bullet and replace it. This is a pretty big task because the tank is glassed in below deck. I received a quote for 2200 for a new tank then 6,900 for the project. I plan on pulling the tank myself to save some money, then I’ll pay a pro to finish the job. Once again, wish me luck!

I’ll keep everyone posted on the progress.
Click to expand...

Water in the fuel is what caused the power loss and scoring in the cylinders. Check the other 4 cylinders for scoring as well
Upvote 0

PACIFICPUNISHER said:
Water in the fuel is what caused the power loss and scoring in the cylinders. Check the other 4 cylinders for scoring as well
Click to expand...

I wish it were that simple. Unfortunately, my symptoms started long before water got in my fuel tank. Motor has perfect compression and physical exam of “scoring” revealed benign superficial scuffs that couldn’t even be felt with a fingernail. Also, power loss was replicated with a completely new fuel source. The problem looks to be electrical not mechanical. I’ll update soon.
Last edited: Wednesday at 12:19 PM
Upvote 0
Show hidden low quality content