I jumped on the Top Gun 80 for a 2.5-day trip that left Monday night. Captain Bob Taft and 2nd Scott were aboard with deckies Steve and Ian, along with Dixie in the galley. As we left the dock around 8:30, some poor guy was having a panic attack about getting seasick (forecast was for 6 – 8 foot+ swells, and conditions were close to that). He had the captain drop him off at the bait barge with all his gear. I felt bad for the guy. Sardines were mostly 4 to 6 inches, with some bigger ones mixed in.

Tuesday morning found us 130 miles south in Mexican waters, about 25 miles off the beach with beautiful weather, but a large swell. A few skippies were landed on the troll early, and then we found our first kelp around 9 am, mostly smaller yellowfin from 6 to 12 pounds, more skipjack, baby yellowtail and a few dorado. We took about 70 fish off that one. I got one yellowfin, releasing 2 yellows and 2 skipjack. Not a good stop for me.

After a few dry kelps, Capt Bob spots the mother of all kelps with dodos jumping all around it. First drift was straight dorado at the beginning, and then the tuna moved in. Before it was over, I landed 2 decent dodos and more yellowfin, and released about the same number of skipjack. I also released a world class hall-of-shame yellowtail that was all of 6 inches.

A few bigger yellowfin and dodos were landed off this kelp as well (none for me). The tuna were biting almost any line size, I used 25, 30 and 40 pound test. I fished mostly bait, but plenty were caught on flat falls and other jigs.

We got limits on yellowfin and maybe half limits of dodos by 3 PM, and the Captain announced we would be making the 180-mile run to San Clemente Island for bluefin. Yeah!

We arrived at SCI around 8 AM with cloudy skies, a threat of rain but less swell. Fishing was slow due to the low-pressure system. We made a few drifts for nothing, and then out went the kite a little north of Desperation Reef. On the 2nd rotation, 2 big bluefin blew up on the dual kite rigs, and both were hooked. One came unbuttoned early, and the other was lost at color, 10 feet from the gaff. Bummer. Choice phrases are uttered by the always colorful Capt Bob.

Next drift, I had a sardine on 50 pound out about 200 yards when I get picked up. I let it run for a 5 count and set the hook. What looked like a marlin explodes out of the water 3 times with huge splashes and then goes deep, where I fought it for about 10 minutes before the hook pulls. Super bummer. We’ll call it a way-early release!

I get a rotation on the kite, and of course nothing bites the frozen flying fish. Oh well, one of those big tuna would destroy me at this point anyway! The captain moves us in close to the island where calicos and cuda were caught until the Navy booted us out.

Moving outside, a drift was set up and now it’s starting to rain on and off when BOOM, one of the kite baits gets annihilated. Angler Patrick takes the reigns and it’s game on, with captain Scott taking some turns pulling on the fish. After about a 40-minute fight, they finally sink the gaffs into a beautiful butter ball bluefin. The entire boat is stoked for Patrick. It was the last fish caught before it started raining in earnest – with a few hardcore guys sticking it out. I settled for a shower and a few cocktails.

The fish weighed 211 pounds back at H & M Landing. I ended up with limits of yellowfin, 2 dodos and kept a few skipjack for lobster bait. What a fun trip and great learning experience for me! 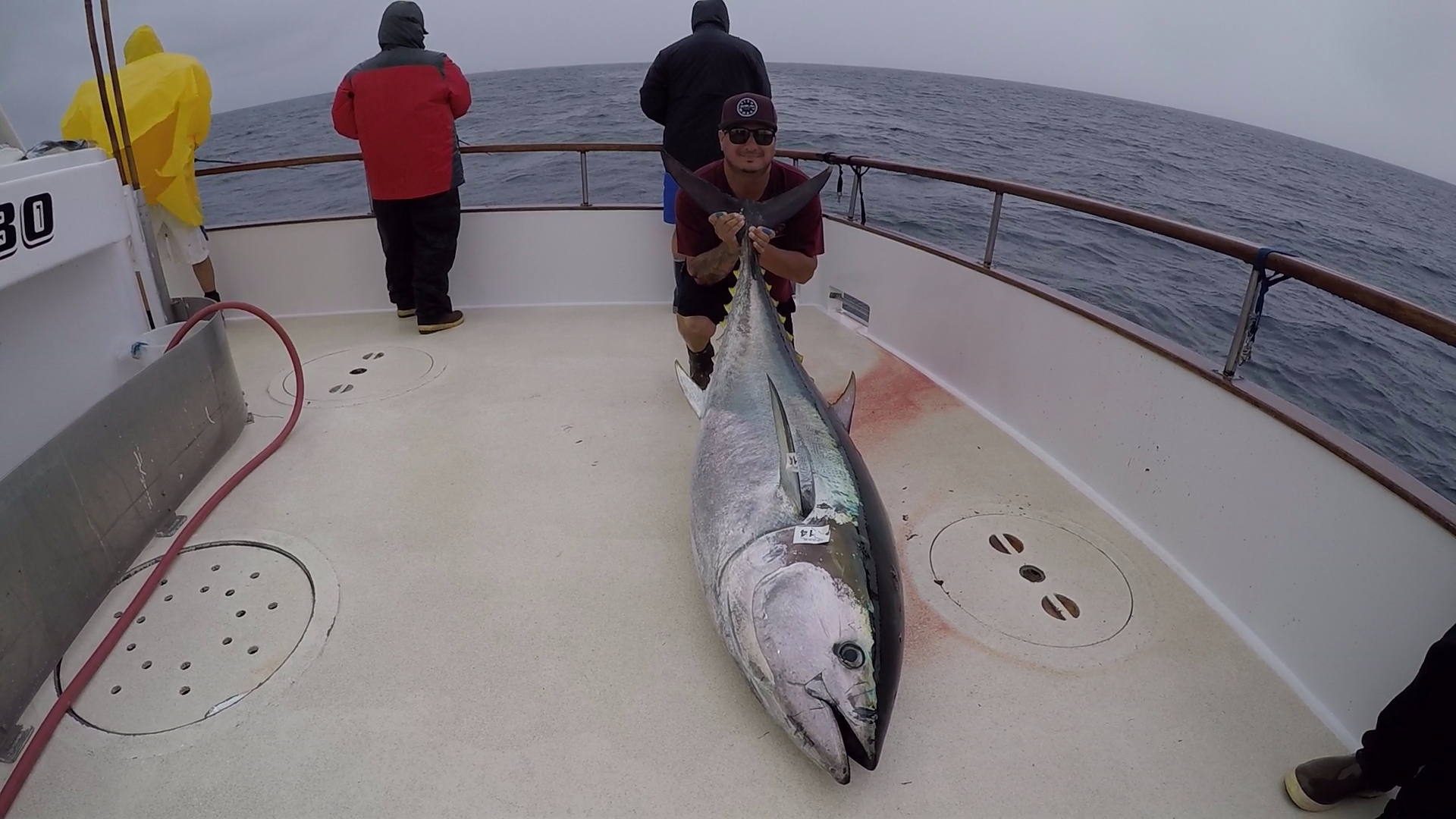 Great report, Mike! Glad you got some ahi before the tide changes to winter. Love the "butter ball tuna" description.
Reactions: mhanson59hb

I was on the trip before yours. We had one blow up on the kite. Yes Bob is character.
Reactions: CartridgeCalls and mhanson59hb

Very cool. I’m hoping my 4.5 day heading to SCI gets some butterballs! Just need a few more guys to get the boat off the dock.
Expand signature
Reactions: mhanson59hb

"What looked like a Marlin?" Marlin and Tuna look a little different.... Marlin have long beaks. What was it?

Steve and Ian are still working there? Bob was riding them pretty hard on my trip.

soopaflyjm1 said:
"What looked like a Marlin?" Marlin and Tuna look a little different.... Marlin have long beaks. What was it?
Click to expand...

"Marlin have long beaks". Man, and all this time I thought they had "bills". Learn something new everyday.

The fish was 200 yards (600 feet for the math challenged) away. It looked like a marlin, but from that distance going away from me and the speed it was going I can't be completely sure.

The 2 most likely possibilities are a marlin or a mako. Since my hook pulled instead of being bit off, I'd say it was a marlin. Whatever it was, it was a big mother fucker.

Tuna do not jump after being hooked - so I am not sure why you are even asking that. But I'll give you some slack since you are from Vegas.....

caballo del mar said:
Steve and Ian are still working there? Bob was riding them pretty hard on my trip.

Yep, and both are green horns (but competent) - there seems to be a higher than usual turnover rate on deckies for some reason!

Nice job glad you got on some fish!!
Reactions: Hardcor and mhanson59hb
M

soopaflyjm1 said:
"What looked like a Marlin?" Marlin and Tuna look a little different.... Marlin have long beaks. What was it?
Click to expand...

Well it could have been a swordfish, he is going with marlin cause that hurts less.
Reactions: mhanson59hb and slydawg

Great write up as usual!
Definitely a good mixture of opportunities in that trip and you got to see the monster show for a while.
Expand signature
Lurkmeister
Reactions: mhanson59hb

Thanks for the tip, I'll make sure to remember that next time!
Expand signature
Go ahead, make my day...

Wandering Blues said:
Very cool. I’m hoping my 4.5 day heading to SCI gets some butterballs! Just need a few more guys to get the boat off the dock.
Click to expand...

pm me on the trip. I know Scott well and have fished with both him and Bob for years but not lately. I'm looking for a trip now. Great boat too.
Thanks.

hawkplayer32 said:
When fishing big fish with small bait, dont wait so long to engage your reel.
Click to expand...

Did they use artificial flying at all or only frozen ones for kite ?
Expand signature
1. Faith 2. Family, 3 Fishing

Nice report Mike, I'm glad you got some meat
Expand signature
The Killer in me is the Killer in you
Reactions: Hippie, Microbait, mhanson59hb and 1 other person

caballo del mar said:
Steve and Ian are still working there? Bob was riding them pretty hard on my trip.

What happened to Jimmy