Offshore Took a shot at the big boys

So my roommate Chris and I got invited to fish with our buddy Keith on his 32' Blackfin. He wanted to hit the 43 and chase the huge bluefin that have been in the area. So stoked for an opportunity at a fish of a lifetime. We geared up for the big boys with #80 and 100 floro leaders and 6/0 and 7/0 super mutu hooks from Squidco, thanks Joey.

Met at the dock at 1:30 am Monday morning to head out. Chris and I had already gotten bait from the day before, so we had a scoop of monster macks ready to go. Grabbed some dines for extra bait/chum and we were underway.

The ride out was rough. Very sloshy. I haven't been sick in over a year, but as soon as we pull up to the 43 I hurl. Weird because I took bonine. But now I feel like shit and need to lay down. It's about 4am.

We'll the word was definitely out because there were 5 cattle boats and 6 large private boats all working about one square mile area. But you can't blame them, we all want a shot at local cow bluefin.

So we start slow trolling the macks and about an hour later I'm woken up to the sound of "FISH ON!" being yelled from the stern. I scramble down just in time to see the rod straighten out and the hook pull? How? 10 minutes later it happens again. WTF is happening? Then we see the sealion eating our #2 mackerel. WHAT THE HELL ARE YOU DOING ALL THE WAY OUT HERE?!?! We pull em in and move, to shake the dog. Setup again and 20 min later something big and blue swipes at one of our baits but misses. He came right back and ZZZZZZZ #100 floro on a talica 25 is SCREAMING off the reel. 5 seconds later, POP and he's gone. Line was pretty clean cut. I guess we hooked him deep? Hard to believe because we were using circle hooks. Oh well, that's fishing. And unfortunately was our only opportunity at the big guys for the day.

Left the area a little later and head towards the 182. It's around 9 and the wind died and the seas are calming down. I'm bouncing back, which I've never really been able to do once I get sick, so I'm feeling good. We hit a couple paddies with slow trolled baits. One goes off and a nice 15 yellowtail hits the deck. Throw out some baits and I'm on. 2 minutes later Keith is on. I'm on #25 floro and Keith is on #20. It's putting up a decent fight and when Chris sinks the gaff I get a chance to see it. Break out the scale and it's my new pb yellowtail at #18.5. I still can't break 20 pounds on a yellowtail, but it's only my 2nd full season fishing here in SD so I'd say I'm doing alright

A couple minutes later and Keith's fish hits the deck. #19.5. Nice fish bro! The paddy stops producing so we move on.

Next patty has little doritos jumping 6 feet out of the water. Baits in and Chris gets picked up. Not a monster, but the bbq doesn't know how big it was. Back on the troll. Hit several kelp with no one home. Found the best paddy I've ever seen. Literally 40'×40'. It was the epitome of a perfect patty. Not a single bite. And we tried everything. Such a bummer. Off we go again.

Find another great paddy and this one has a group of #12-20 dodos crusing around. Baits in and Chris gets picked up and lands a #12 hen. Unfortunately didn't get a picture.

Now we're heading back to the 181 with trollers in for maybe 10 min before the back and purple feather gets hit. Picked up a baby dodo. Reset and back towards the 181 but the water just gets greener and greener. Find a couple kelp with no one home and we decided to call it and head for home. Back in and done cleaning the boat around 4:30. Long day on the water, but a great way to spend a Monday. Thanks again Keith for the invite out. Always a good time fishing with you bro. 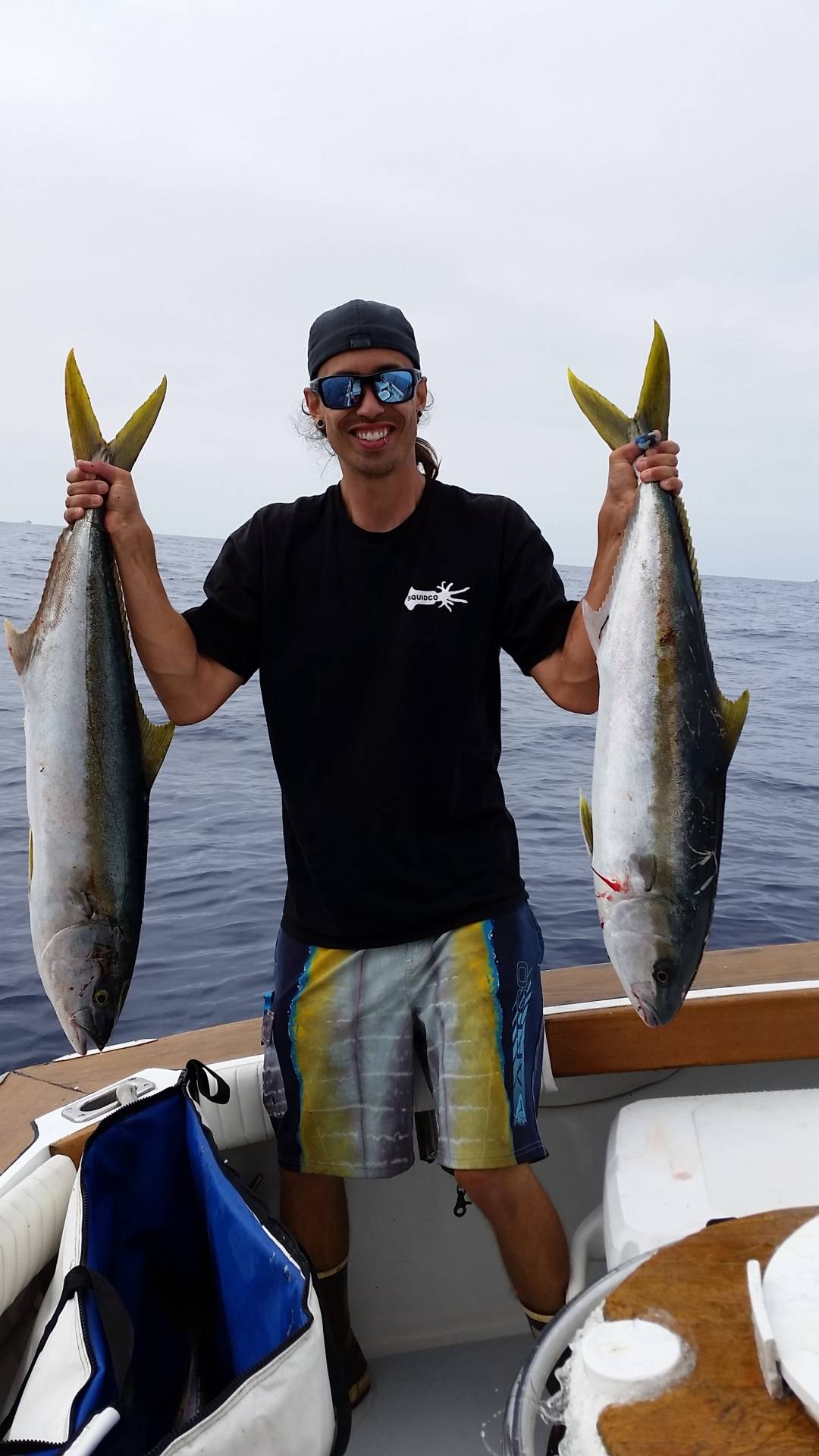 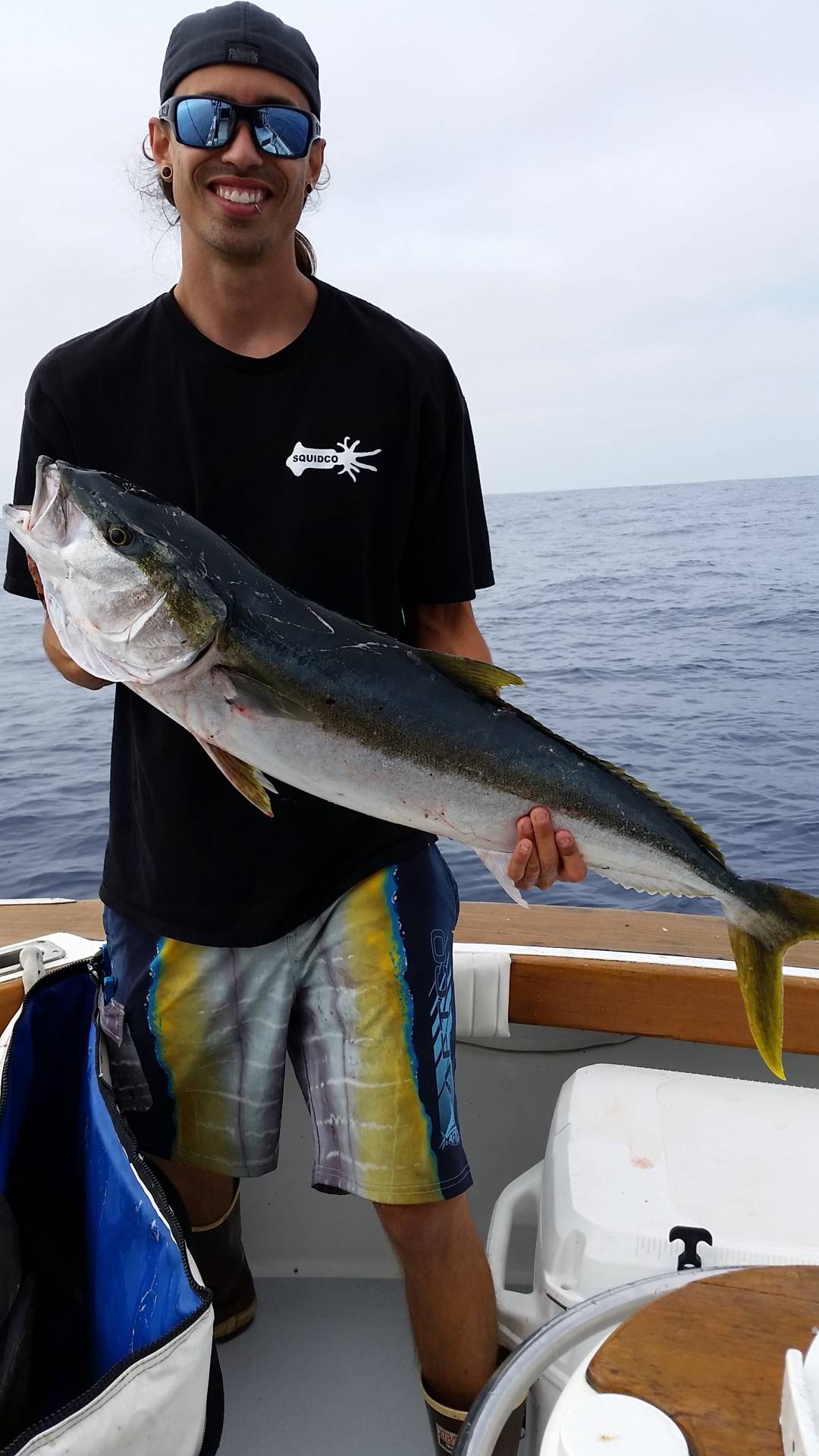 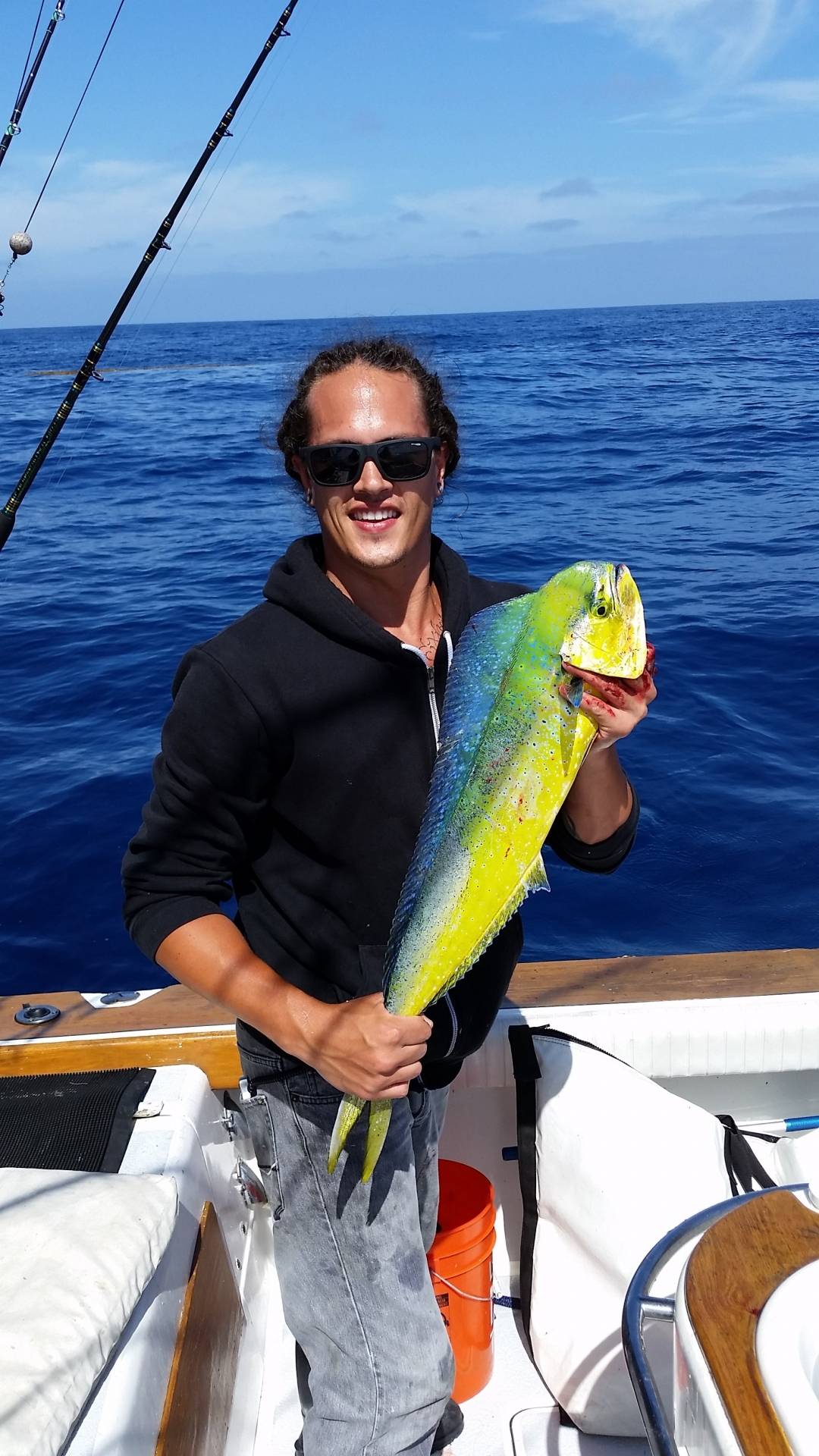 Not sure why with all the big fish out their people are keeping the small ones
Reactions: IPayBar
Upvote 0

We cuaght a shit ton of those small doritos sunday.Mmm,mmm,mmmm.Good god those are great grillin....my fave.
Toggle signature
I fish for sustenance,I suffer from sustenance abuse.
Reactions: marlyn, chris k and Slice-Of-Life
Upvote 0

Sounds like a fun day, too bad you missed on the big BFT early.
Toggle signature
Mark on the Stonefish
Upvote 0

cool... thanks for the report
Upvote 0

sandman3168 said:
Not sure why with all the big fish out their people are keeping the small ones
Click to expand...

Congrats on some beautiful fish!

I'm not sure if you noticed, but your shorts almost match your fish!!!

Nice day out...You'll break the 20+ lb. YT mark soon I'm sure. Especially with the way this season has been. Start slinging the metal regularly and you'll experience a night and day difference on a YT over 25 lbs. Those toads can PULL! BTW, Joey over at Squidco has never caught a YT over 20 lbs. so I get it...J/K! Congrats on you PB's so far...

Thanks Jesse. It was a fun trip. I'm trying to load up some screen shots from the fishfinder but I keep getting error messages.
Last edited: Aug 6, 2015
Upvote 0

I'm not sure if you noticed, but your shorts almost match your fish!!!

Aren't those some sweet shorts? They were a Christmas present from my roommate. They're going to be covered in blood stains by the end of this season

Could have been a Mako!!
Upvote 0
S

Like the honesty on the Yellowtail (nice fish). Many others would have called it 25lbs. You'll get a big one soon.
Upvote 0

It wasn't a shark. We saw breaking fish. Shit happens 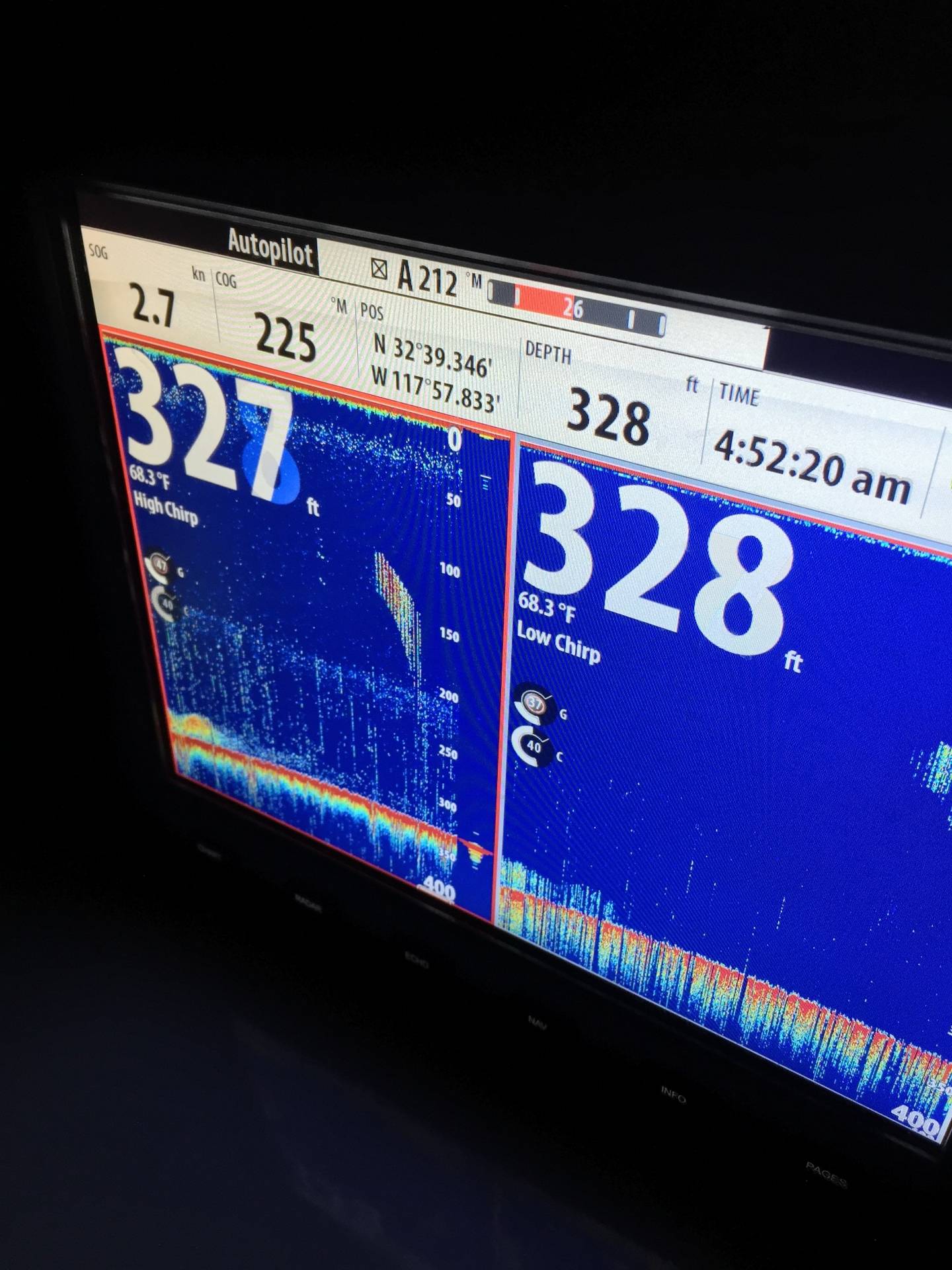 Scott Higbee said:
Like the honesty on the Yellowtail (nice fish). Many others would have called it 25lbs. You'll get a big one soon.
Click to expand...

Thanks man. Yeah, I can't stand it when people hold their fish at full arms length in pictures and claim the fish are #25 when they are clearly around #15. I don't get the point. I don't want to be one of those fishermen that tell stories. I'd rather just be honest.
Reactions: grader 2750
Upvote 0
Show hidden low quality content
You must log in or register to reply here.