Boarded 11am Sunday. We spent about 90 minutes, maybe more, at the receiver. Captain Mike Laust put on a sh”&$t ton of baits. Most were on the smaller side, with a few 5” mixed in. We were told to rig up because, Mike came over the speaker and told us it was going to be too rough to rig once underway.

dang. He was not kidding. We turned right in the general direction of SCI, and wow. We took a beating.

we arrived at the spot at about 8/9pm. We were going off meter marks, using mostly knife jigs. The wind made us drift so fast. 500g knife jigs were necessary to get in the deep zone and stay there.

I did this for about 2 hours, no love for anyone, and planned to rest until 3-4 am for pre gray light, gray light, and dawn.

we were metering when I woke up. Still very rough and windy. Major mixed swell and short period about 7 seconds. Yuk. No one caught during the night.

we caught a few school sized on jigs and flat falls. Then we made a move in the afternoon and started the kite and balloon operation. This yielded spectacular results. Most of them over 100, some over 150, and I think 4 cows. All on either fresh dead, popsicle, or yummy flyers. Also there were a couple netted the night before.
We had only one casualty all day(and night), which speaks to the professionals running the deck. Also, passengers were typically very good about winding in to avoid tangles. We all wanted our shot.

the deckhand on the tank brailed baits on Mike’s command unlike anything I’ve seen. No wonder we were so long at the bait receiver! Holy smokes!

my number came up and I was ready. I had the world’s best ever deckhand with me for the whole time. He only asked for the rod to get around the bow or stern, or once when he ran up the rail when the fish tried to beak off under the boat, and at almost deep color while they used the fork to keep line out of the prop. He knew without me telling him that I wanted the test. Once he cleared the hazard, I went right back on. It felt great to not be underestimated. And it made the prize of bringing it up, then gaffes, then hearing the sweet thud and happy whoops from others very special. They taped it out and it came in at 204#. My first cow. It went 218 at the scale.

mike Loust is an animal! He kept us fishing until after midnight because he had found an untouched school somewhere and wanted everyone to get a try. Those deckhands were studs! It was like a 48 hour work day for them. Amazing. Tomahawk is on its game. Seriously. It’s a fishy setup for people who want to fish as a priority, not those who want the fancy boat treatment. No judgment there; I like both. But I was hunting, and needed a guide. Not a lodge. Ya know?

great guys fishing. No jerks. Lots of us caught PBs. Some didn’t catch at all, but stayed up on deck fishing the whole time! Just awesome. Boat full of sportsmen. And me, the salty ol’ lady.

My first cow. Wow. A life achievement. Thanks Tomahawk and all the men aboard. 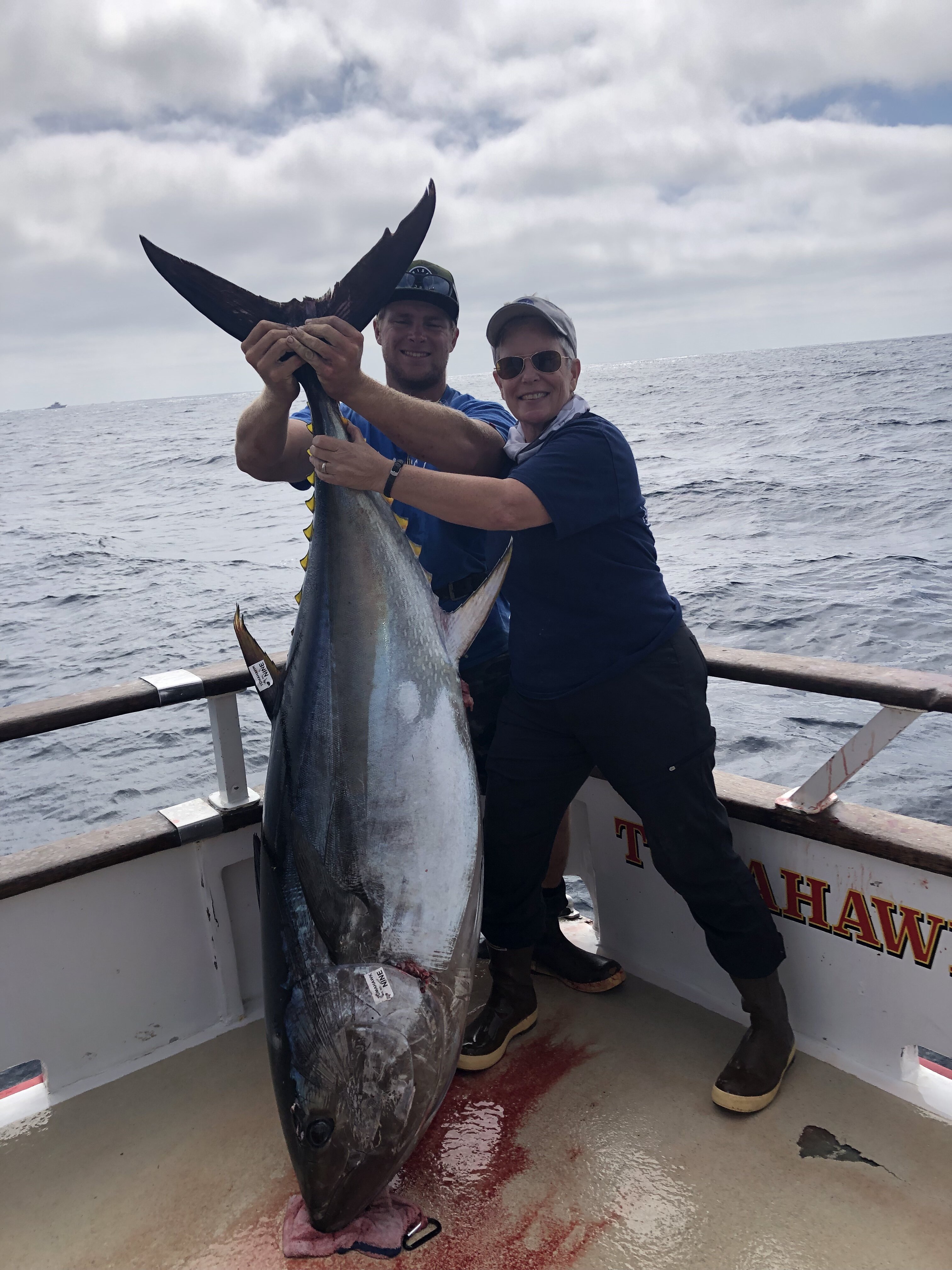 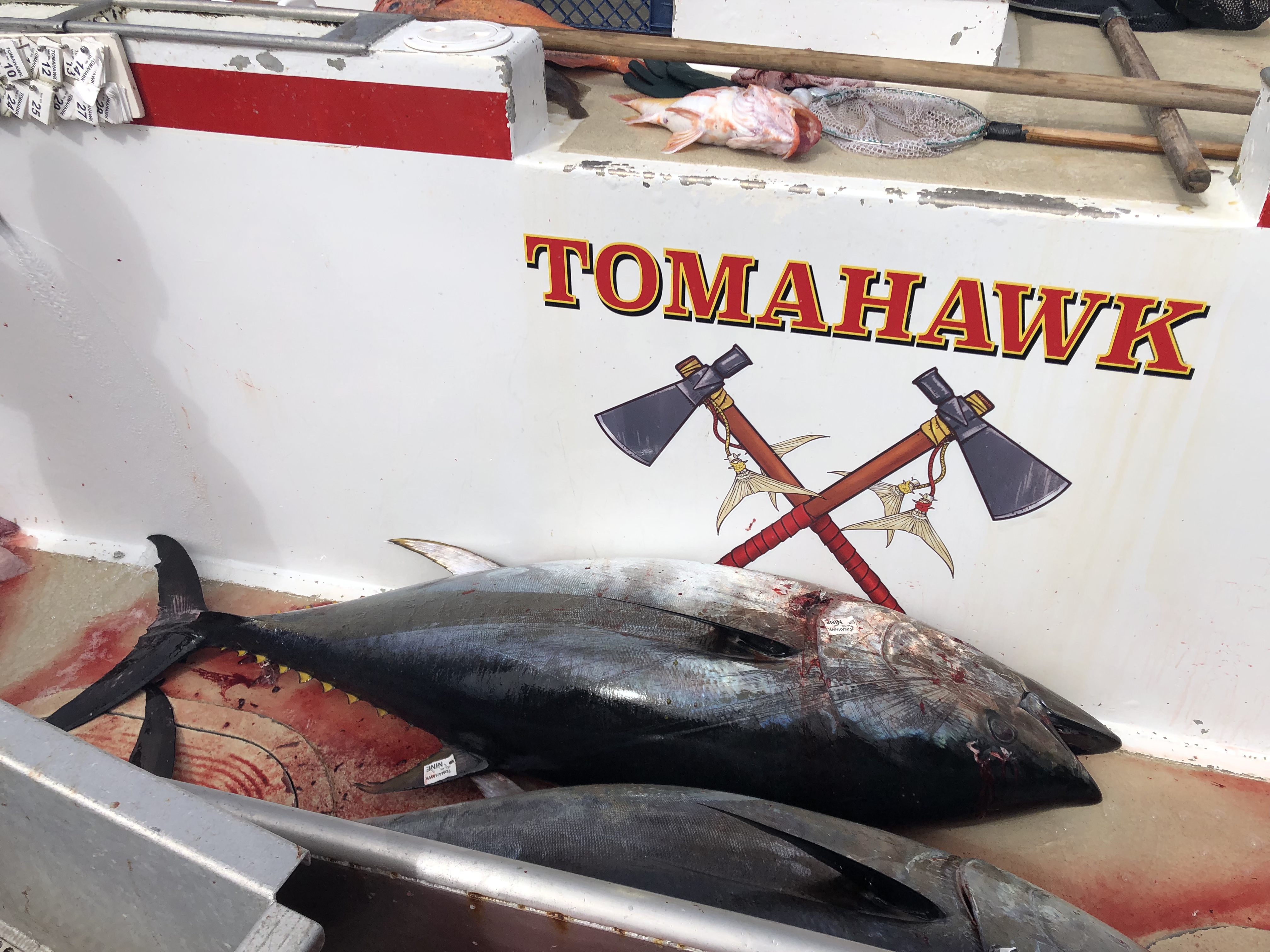 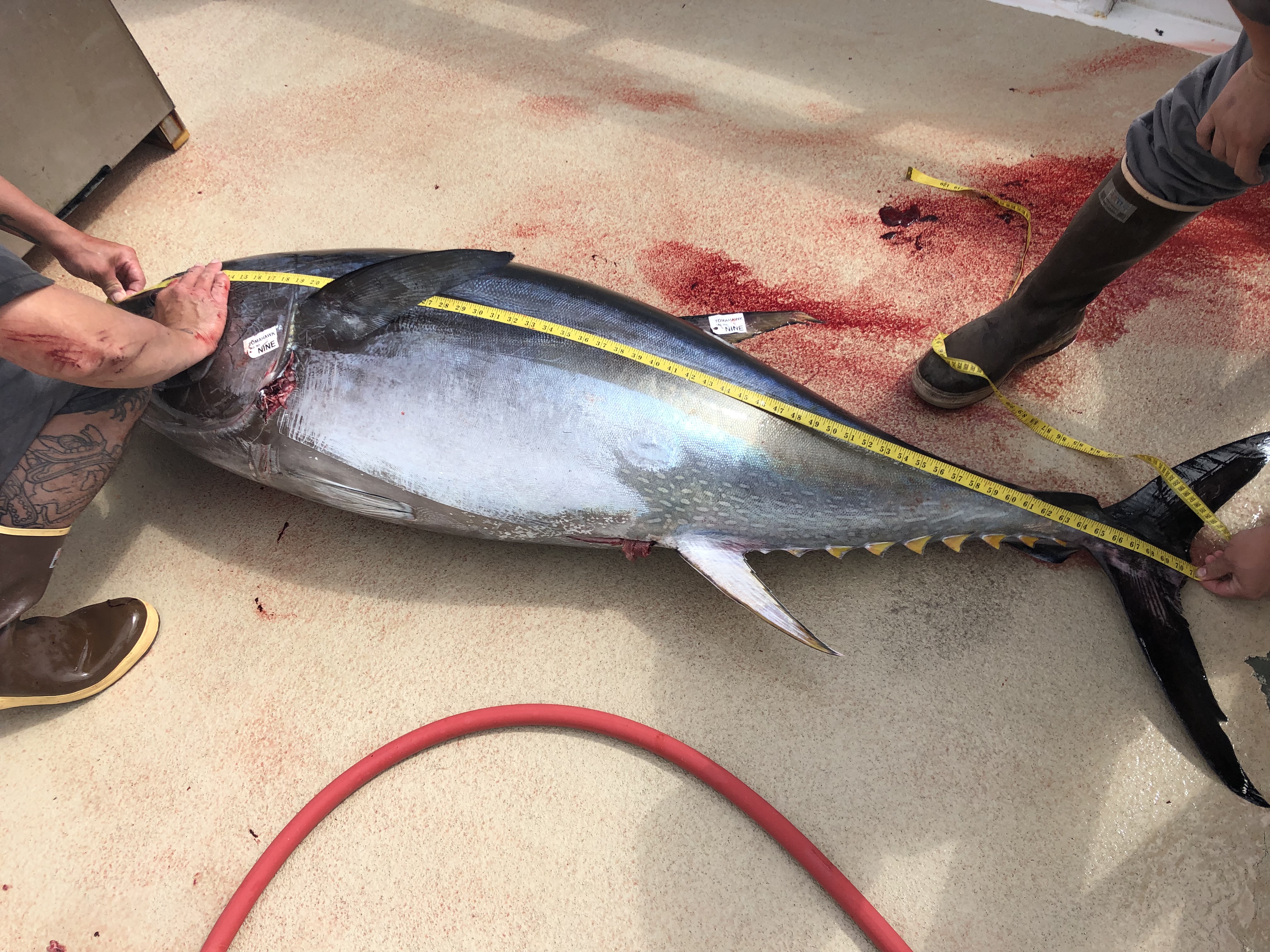 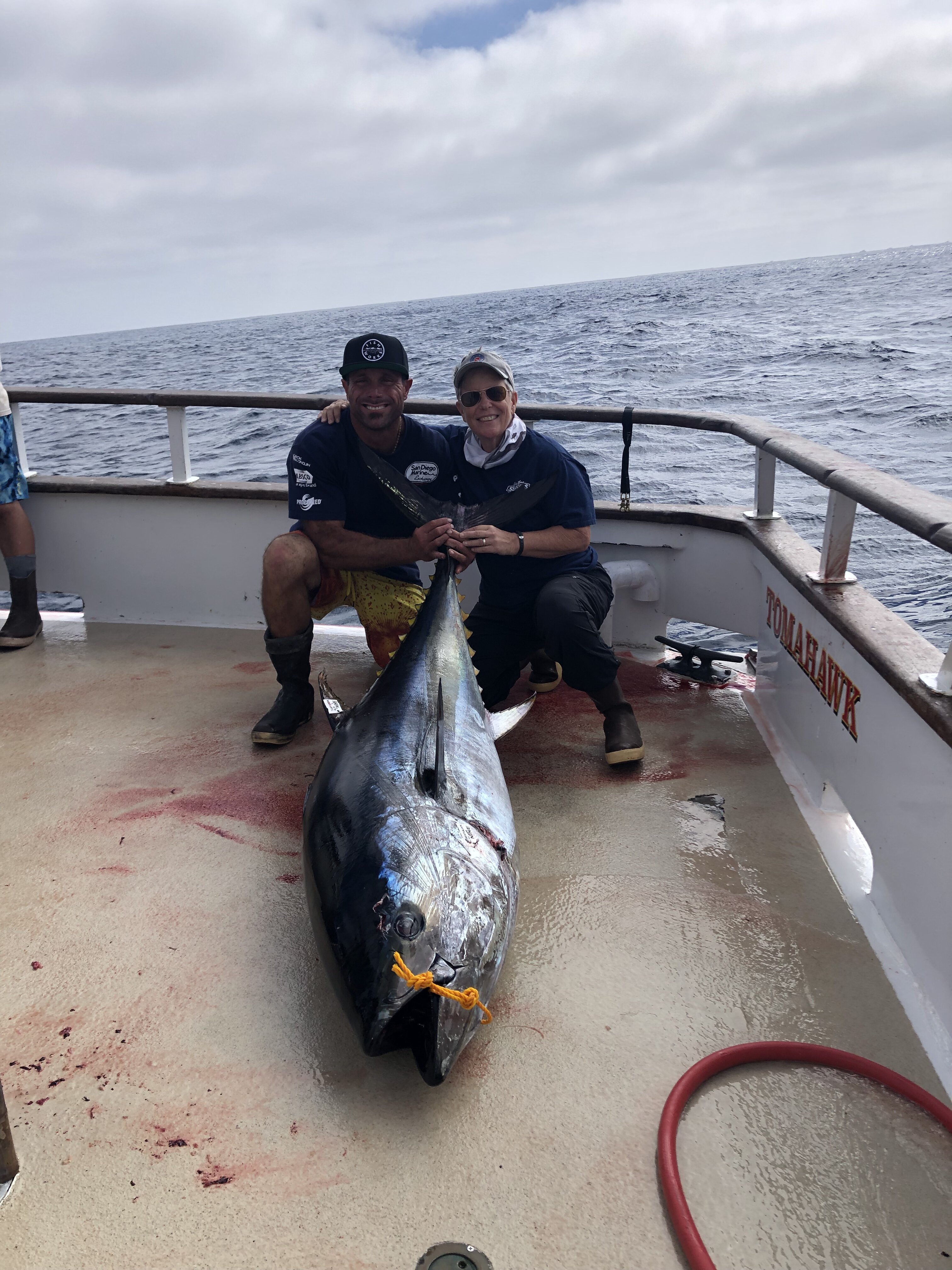 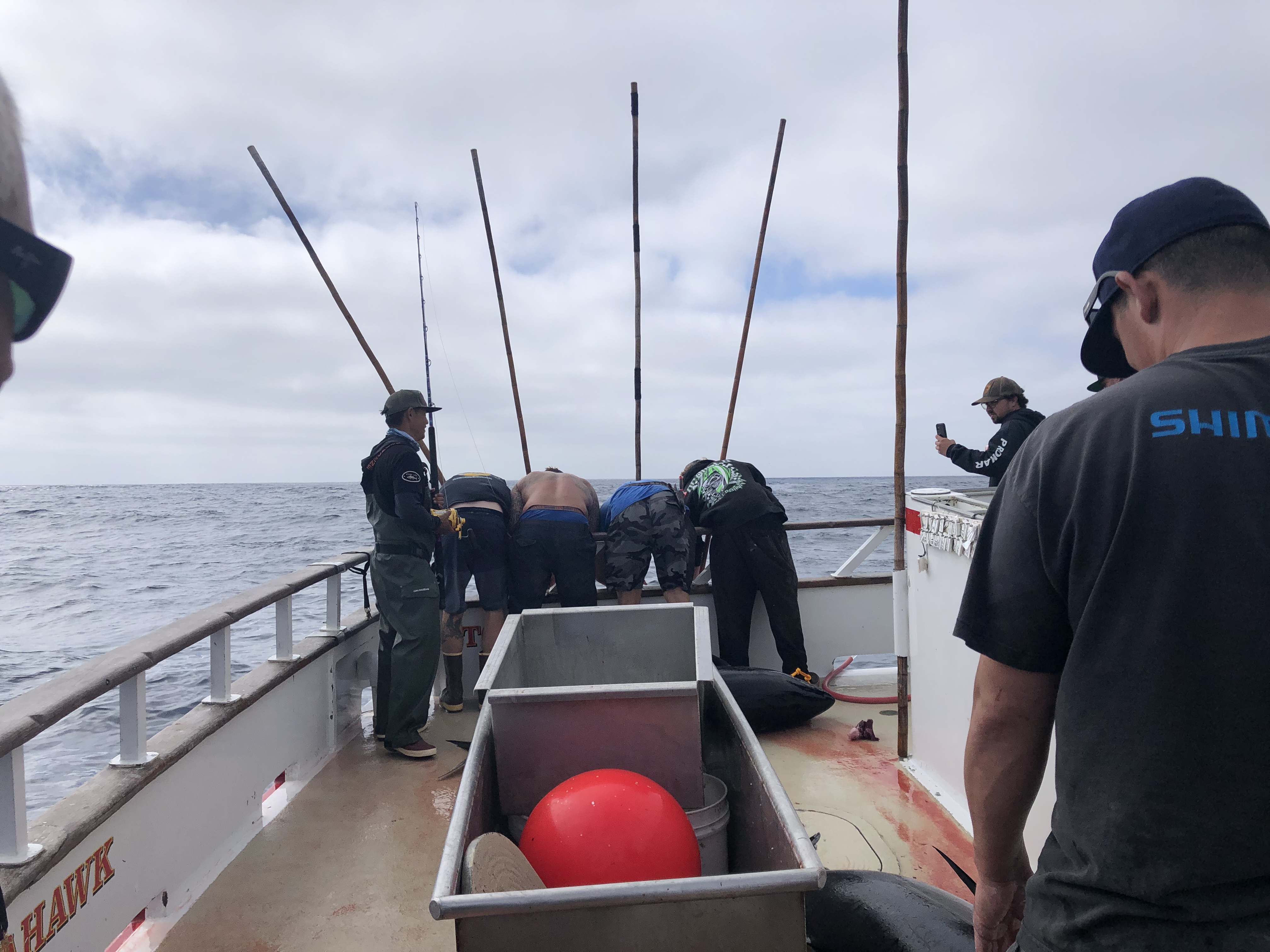 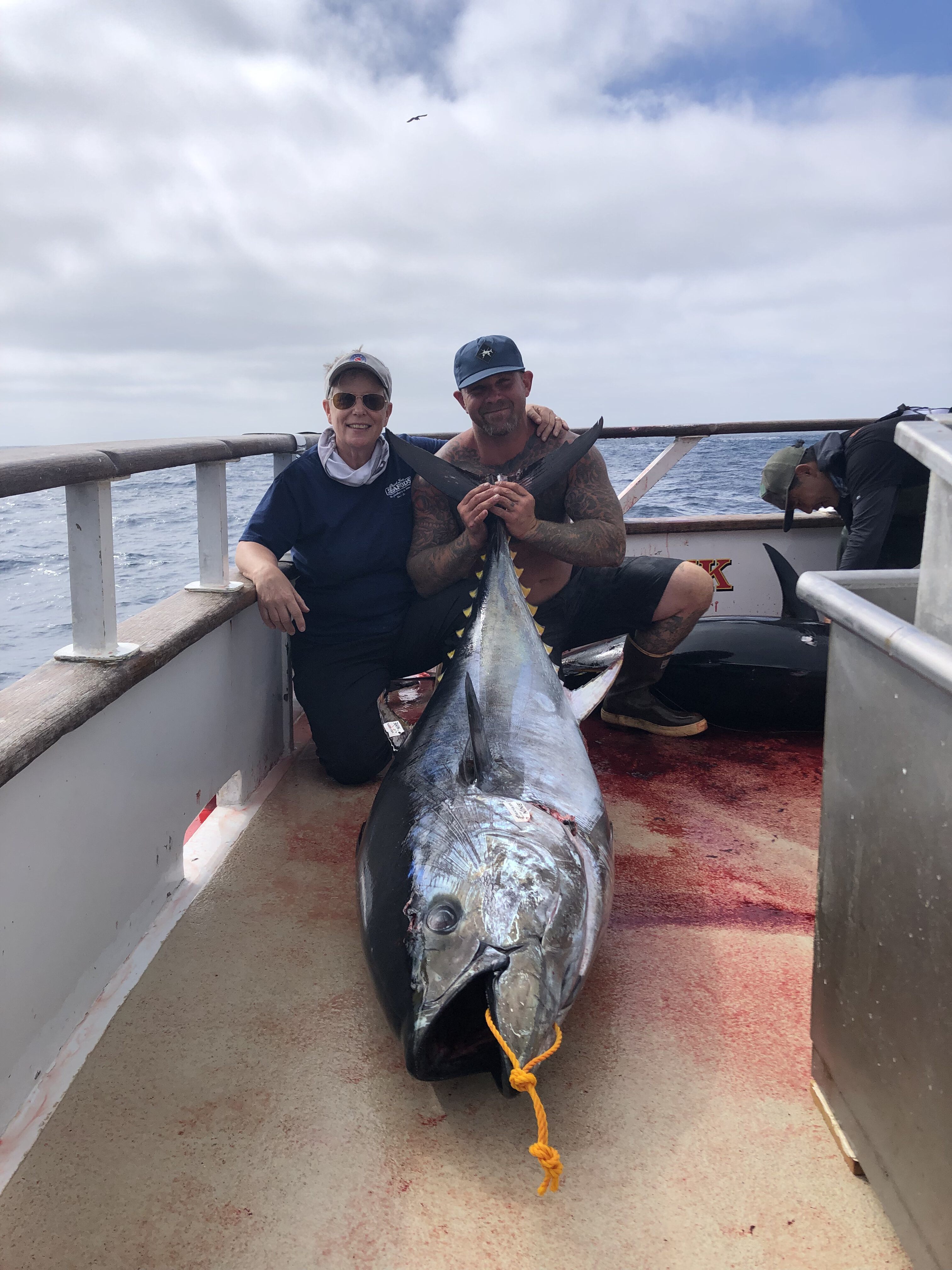 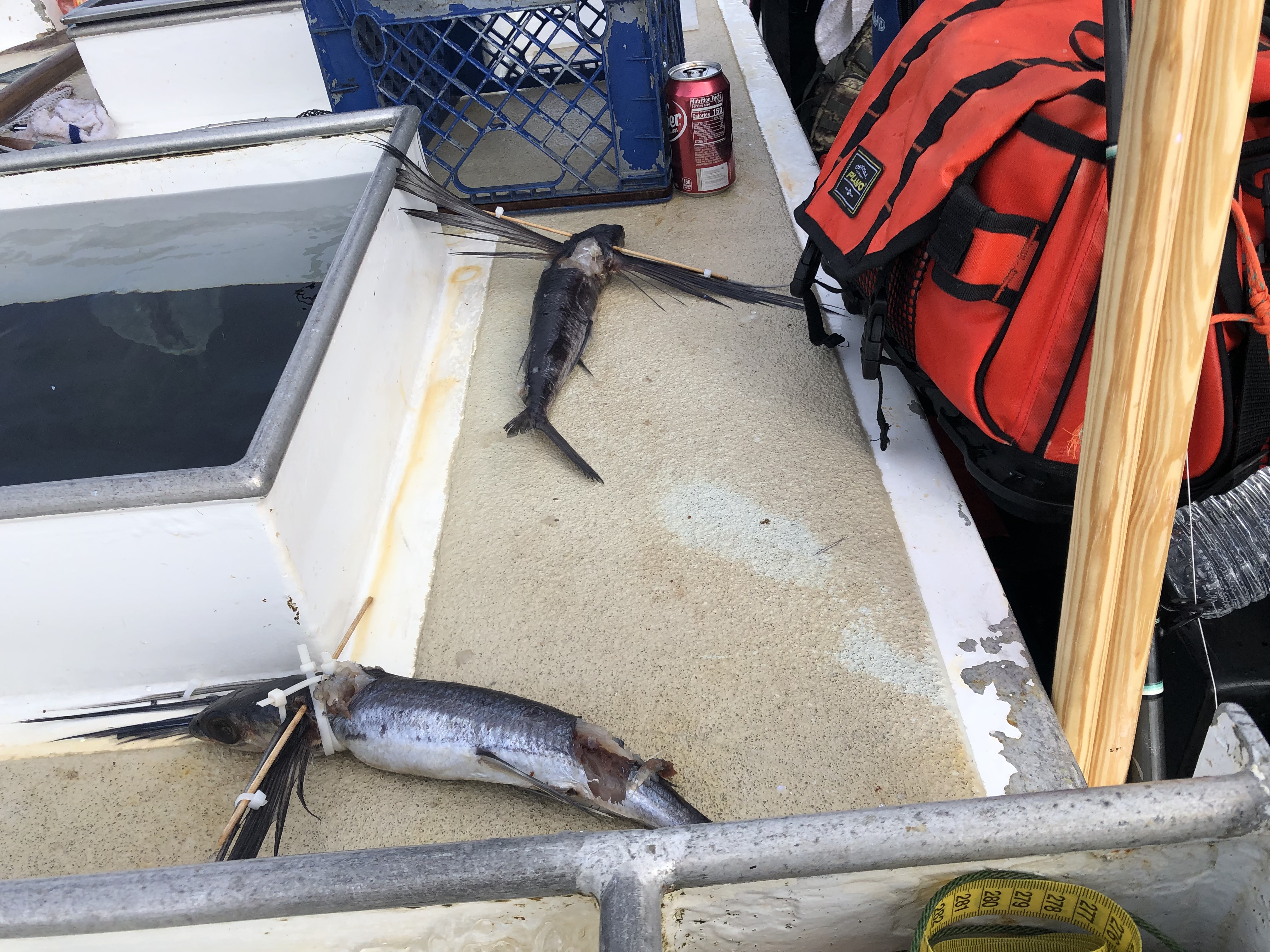 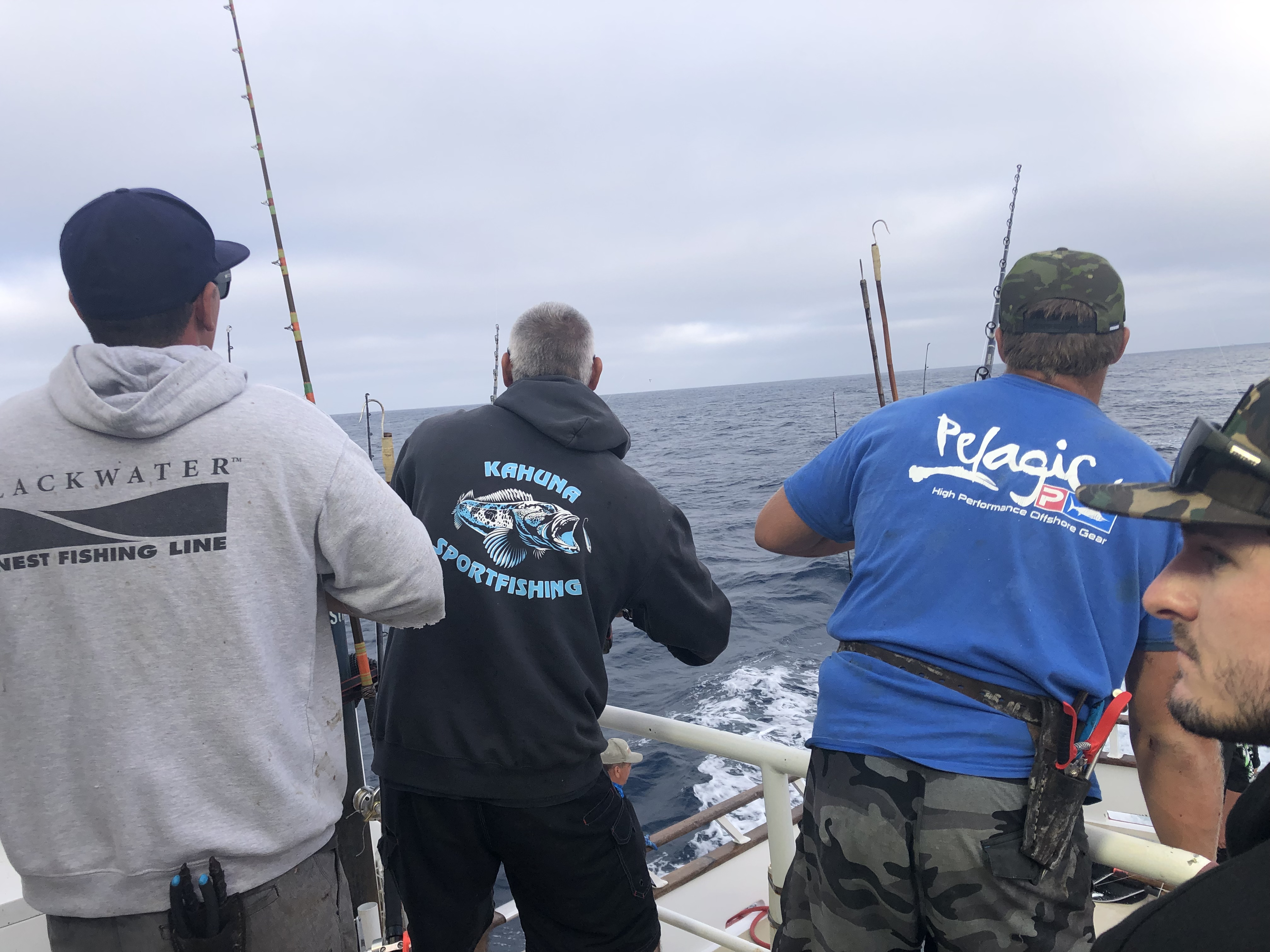 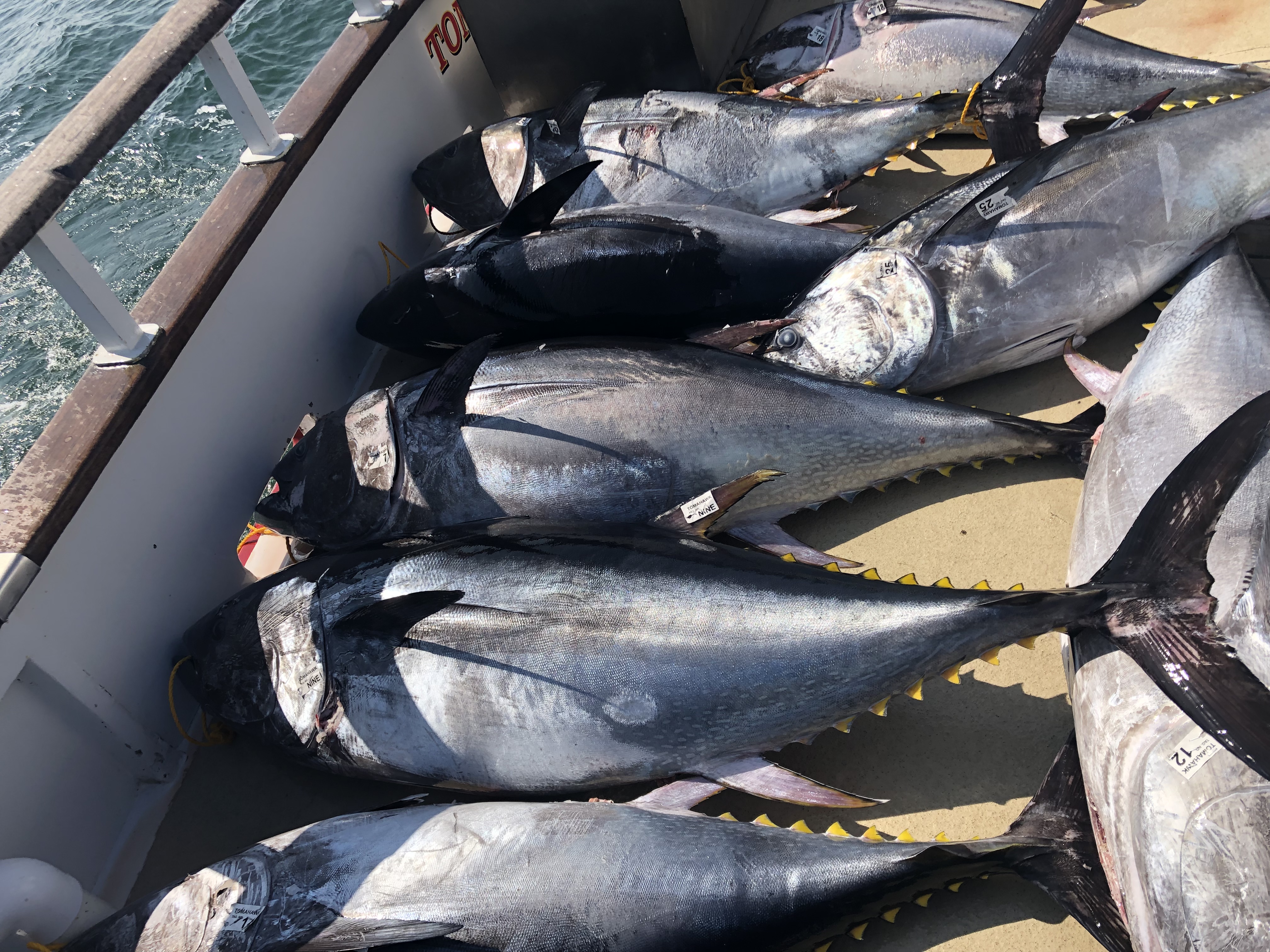 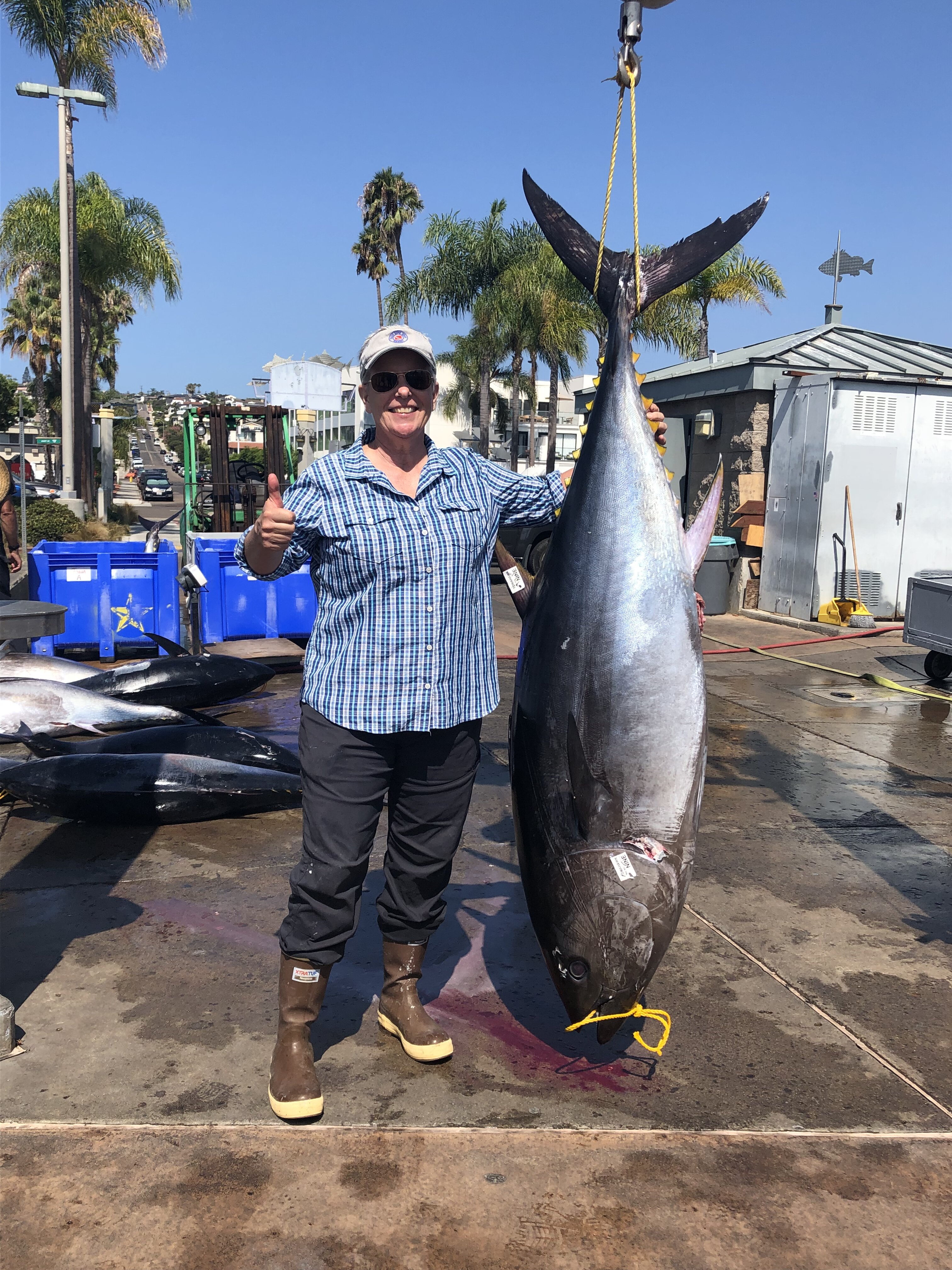 ATTAGIRL PEG. Nice new PB Tuna!
Great report, info,pics and reading.
Yeah it looked knarly offshore, but
glad you made the best of it out there.
Reactions: Ahkhuang, Tuna Dreamer and Peg North
Upvote 0

Wow! A lifetime achievement for sure. Congratulations on the cow. Thanks for the great report. That's the way to get it done!
Reactions: Peg North and Tuna Dreamer
Upvote 1
J

You did a great job getting that one in. What was the rod and reel set up?

Thanks for the report, and congradts! Gotta feel good! A real toad!
Toggle signature
Fresh one!
Reactions: Peg North and Tuna Dreamer
Upvote 0

Nice! And, Yes! Mike Loust Really pushes everyone, none more than himself, to Catch Fish! Last May on Tomahawk on an extended 1.5 Day with snotty weather we fished hard, I boated 120#, 125# and 185# BFT, also my PB.
Reactions: Joefisherman, Tunahead, Peg North and 2 others
Upvote 0

Great report and one heck of a nice cow Salty!! World class fishing in our backyard. You said, "All on either fresh dead, popsicle, or yummy flyers." Just curious, what is a popsicle?

Congrats and nice job on the fish! That deckhand in the first pic is Brad, super nice guy and really helpful. I went on an extended 1.5 with them in mid July but it was slow unfortunately and I only got one school sized.
Reactions: Peg North
Upvote 0

Incredible achievement! Way to go!
Toggle signature
Thanks for your report. Hook up! Cory
Reactions: Tunahead and Peg North
Upvote 0

Love the shot of the four deckhands bending over in the corner with four gaffs in the air! The perfect picture of a successful end-game. Great job, congratulations on a cow!
Toggle signature
"The path to your destiny lies in allowing the discipline of your dreams."
Reactions: Tunahead, jiggermyster, Peg North and 1 other person
Upvote 0
D

Awesome fish! Congratulations!
Yes, Loust and crew are the best! Fished with them in August and they never quit! Will definitely go with them again!!
Reactions: Peg North
Upvote 0

Toggle signature
"What is the MLPA anyway? They are the meanest people ever!"

John S. said:
You did a great job getting that one in. What was the rod and reel set up?

It was the boat kite rig, and honestly I was so gorked trying not to hyperventilate or

, I couldn’t tell you what I was working with. Heavy line like rope, broomstick, shiny 2 speed reel.
Reactions: Tunahead and Abusaade
Upvote 0

QuailSlayer said:
Great report and one heck of a nice cow Salty!! World class fishing in our backyard. You said, "All on either fresh dead, popsicle, or yummy flyers." Just curious, what is a popsicle?

Peg North said:
It was the boat kite rig, and honestly I was so gorked trying not to hyperventilate or

, I couldn’t tell you what I was working with. Heavy line like rope, broomstick, shiny 2 speed reel.
Click to expand...

I can imagine. Again, super impressed with your catch.
Reactions: Tunahead
Upvote 0

Love the proportion of your fish in that first photo. Looks like a perfect bruiser with that fat wide tail.

Boat
if it floats, flies or phucks you rent it...

Fantastic. What a season we are all having . Congratulations
Reactions: Peg North
Upvote 0

That boat has always been "fishy" even as Cat Special at Channel Islands, Newport in the past.

Well Peg, that's enough tuna you last you
all winter I'd imagine?