Those huge poppers and stick baits made for GT

Does anyone have experience at the buffer zone or HB with any of these huge baits, designed for casting, mostly on big spinners (So I would not want to hook anything over 100 pounds on one)?

There are videos of their actions that are enticing. Some float like a flier. They are prohibitively expensive. They look fun.


Companies like MB Customs (Yes, the Austrailian with wonderful dexterity that has a nice demo of a hitchless FG with Rizzuto: https://www.mbcustomlures.com.au/videos.html (I think the version on his website is a bit clearer than the version on YouTube or the one on Facebook)

So Loc,
When are you going to start making some? We all know you have the time, talent, and tools to do it, so why not?
Reactions: Elitetv1958
Upvote 0

Cubeye said:
So Loc,
When are you going to start making some? We all know you have the time, talent, and tools to do it, so why not?
Click to expand...

Au contraire! Those that make these things are clearly dedicated artist fishermen. I lack the 3D printing, resin casting, and certainly the finishing skills and could not possible go through those learning curves.

These things sure do have more varied actions than any of our raiders or bombs or even things like nomads.
Reactions: Cubeye
Upvote 0

The MB Custom Lures video shows one way to form the FG portion. I never could get the hang of the hand triangle method, but i can see that can be very efficient way to tension the Spectra. You can do it with a FG tool or you can lean the rod out and put the spectra end between your teeth which is what I do. Too much tension is no bueno. Tension lock the FG when you set with pullers.
Toggle signature
Fair Winds and Following Seas,,,
Upvote 0

Those are all awesome lures especially if you're a billionaire or part of the Yakuza. But I don't think any of those poppers will fish much better than a Halco roosta when the fish are in the mood.

I've increased my popper catch rate recently by going to much smaller poppers. The Halco roosta 105 has been working well for me. I did buy a smaller spinning rig that's dedicated solely to throw the little guys.

When there is a foamer going off, I use the big rig / big poppers. When all I see is a boil here and there during a bait bite I throw the little poppers. Especially in calm glassy conditions.
Reactions: Sawmill killer and locvetter
Upvote 0

DennisV said:
part of the Yakuza.
Click to expand...

Yikes! -- I did not know what that was, so I looked it up. Interesting.
Upvote 0

locvetter said:
Yikes! -- I did not know what that was, so I looked it up. Interesting.
Click to expand...

Yeah, you might not want to buy the very last Heru skipjack if the guy standing in line behind you has that look.
Reactions: locvetter
Upvote 0

locvetter said:
Yikes! -- I did not know what that was, so I looked it up. Interesting.
Click to expand...

My best is a 70ish on a full size yo zuri surface cruiser. With owner trebles ringed on. Outside of clarion

Bird popper for GTs. Could go through a few thousand dollars in expensive fancy poppers fishing GTs. On a single trip

I would think most of the super expensive ones are just to hook fishermen.

Caught fish on Yozuri, Halco, Cotton Cordell. That's $30 to $6 right there for poppers.

Yozuri sliders work and the Shimano plugs do too. All way less then custom GT stuff.

Now, will they hold up to monster GT abuse, I dont know. Maybe that's why guys pay big bucks. But my guess is cheaper options work just the same.

Haven't tried them yet but those Nomad plugs look good at a reasonable price.
Reactions: locvetter
Upvote 0

Ebb tide is just another shop that orders from heru. They make great lures and sell them to various shops, some want their name on them. Most of these lures are fairly affordable and ask any GT or bluefin tuna popping guy that has been doing it for a while $25-50 lures are not considered expensive lures . You can get into the really exclusive stuff that can cost $400 plus like the moutoukenmaru minopenmaru or some exclusive carpenter Gamma stick baits.
Merv makes some really cool lures, and I never used any of his poppers but have custom stickbaits made by him and caught a bunch of tuna on them. I highly recommend the frantic series.
Saltwater popping for bluefin or GT is like hunting big game on a safari. Most times you need really good equipment and experience. You pay to play!
Reactions: locvetter
Upvote 0

Some of the expensive lures actually do work better. Smith baby runboh, straight tied, no split ring or swivel, has the best action of any lure I've fished. Similar to a Shimano Orca, but with better s swimming action. Got a 72# yft on the porpoise near SD last month, so you don't have to go that far. The school had lots of bigger YFT as well. Casting in breaking porpoise schools is almost like a guarantee. Porpoise won't touch it, so far, but the tuna see it well. The heru skipjack is quite good. I have the jackfin lures and they seem to swim well, but only caught 1 on those so far. I have tried the nomad poppers and have not been successful, but then no one was. Also tried the nomad stickbaits, maybe they are too big, but they don't swim as well as I would like. If you are set up with a heavy rod, line, and a reel that can fish heavy drag, you can bring the fish in quickly. The 72# fish was about 5 minutes on a 10ft rod with a stella 14k. You should have no problem with fish to 150 on a rod that is 7-8 feet, after that, I would recommend a harness setup. You can use the straight arm techniques, but that still gets tiring. I find if you get a little break when the fish runs, you can really put the wood to them when they stop.
Reactions: locvetter
Upvote 0

Yes, that's my back.

One thing I think a lot of people are forgetting is that a higher quality bait is going to come stock with much better hooks and the rigging system within the lure will be much more robust (ie no bent out hook hangers).
Toggle signature
Seeker Pro Staff. Custom Rod Builder. Rod building component peddler.
Reactions: locvetter
Upvote 0

So how about seabird feathered poppers

to this day. I still trust my eyes that I saw a tunafish boil and eat a bird. Maybe not but I'm pretty sure the bird vanished

If I thought a fancy popper would do its job i would buy it and fish it for tuna. Hard to loose. Just not for GTs hooked 1 foot away from dry corral heads. Beautiful finishes on fancy poppers but a no paint poppers get bit just fine. Kinda thread jacked. A mothership boat charges extreme for them

If the budget was huge. A $50,000 popper collection would be awesome. They look so rad
Reactions: locvetter
Upvote 0

ZZZZZ said:
They look so rad
Click to expand...

I agree. Some of them are really works of art. There had to have been a lot of learning to do the foils and abalone and scale patters and airbrushing - to say nothing of the trial and error swim patterns and balancing horizontal float. A pretty niche.
Reactions: ZZZZZ
Upvote 0

ZZZZZ said:
.... I still trust my eyes that I saw a tunafish boil and eat a bird. Maybe not but I'm pretty sure the bird vanished
Click to expand...

I've seen a Marlin take a Seabird off the surface.
Reactions: locvetter and ZZZZZ
Upvote 0

Scold said:
One thing I think a lot of people are forgetting is that a higher quality bait is going to come stock with much better hooks and the rigging system within the lure will be much more robust (ie no bent out hook hangers).
Click to expand...

While the hook hangers tend to be very strong, most of the highest priced lures come without hooks - just recommendations.
Upvote 0

This is a video I wanted to put in the start of this thread - but could not find. Some of these actions are pretty cool. they start at about :57.

locvetter said:
This is a video I wanted to put in the start of this thread - but could not find. Some of these actions are pretty cool. they start at about :57.

There are a couple of merv’s older videos. He was making big bluefin dedicated stickbaits like the cruising series and doing a lot of damage in North Carolina every spring. Got a couple frantics in custom carpenter gamma colors that look incredible and swim just as good. He is a very easy going person and every time his work is simply amazing
Reactions: locvetter
Upvote 0 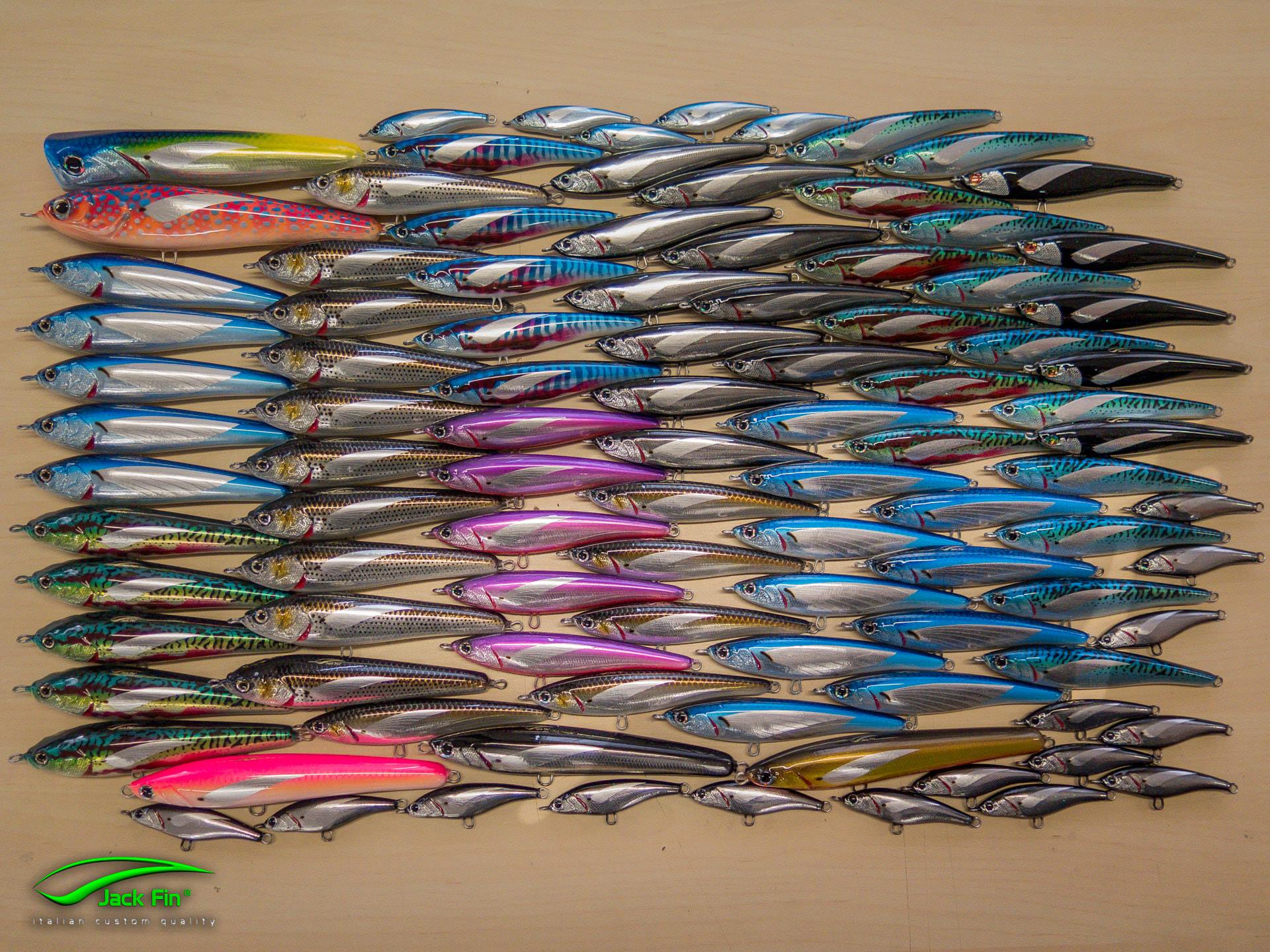 Bft eats seagull then spits it back out.


Must be sketchy to be a seabird feeding in a tuna frenzy. Seabirds are brave creatures 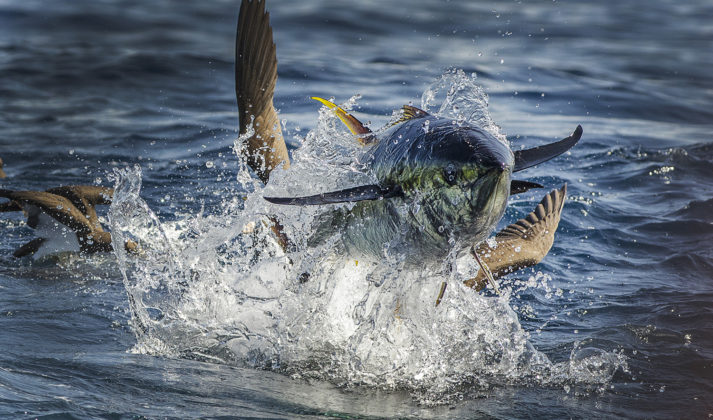