Got out yesterday with my regular James and semi-newby Randy who's only been on a few party boats (yet has a 42# yellow under his belt.. must be nice)

Anyway, the original plan was to try for bluefin at the 499 in my 17'cc but mother nature had other plans. So I figured we would join the herd chasing dorado for a few hours until the early afternoon when the tuna would (in theory) show up in Avalon Bank.

Left Pedro pretty late around 7:45 after fueling up and getting bait and stopped on a few patties loaded with dorado (and other boaters). Didn't see anyone hooked up but gave it a go for a little until it was time to move on. Got to the east end of Cat around 9:30 and spent the following hour driving around looking for life but saw/heard nothing other than every other boater leaving for the 277. I decided to stick it out until the afternoon so that we'd be in position if they showed up.

By around 10:30am we spotted what looked like white caps around 2-3miles out. Hopped on the binos and saw it was actually bluefin! Couldn't believe they were already going this early (let alone 6 miles from the east end)!

Pulled up on them and got one to go on the ghost 150 only to be broken off yet again (went 0/5 a few weeks ago on poppers, flat falls, etc.). I thought to myself, here we go again.. I tied on an iron and gave that around 30mins until the foam disappeared. Mind you, we had been chasing foamer after foamer for the last 30mins for no love.

I decided to head back to where we started and threw out everyone's new favorite lure (madmac). Still no life for the next 10mins or so until we saw a football field sized foamer off in the distance. Rather than burn a minute winding up the mac, I told my buddy to shut down the drag so we can get over there faster (around 20-22kts). Right as we're about a mile out or so, I slow down to around 18kts and get bit immediately. Fought that for a minute until it broke off (50# mono is too light.. especially when the drag is still shut down). Tied on my only other mac and started heading toward the foamer at around 15kts and was bit almost immediately again. 15mins later, my boat (and my feet) get a nice bath. 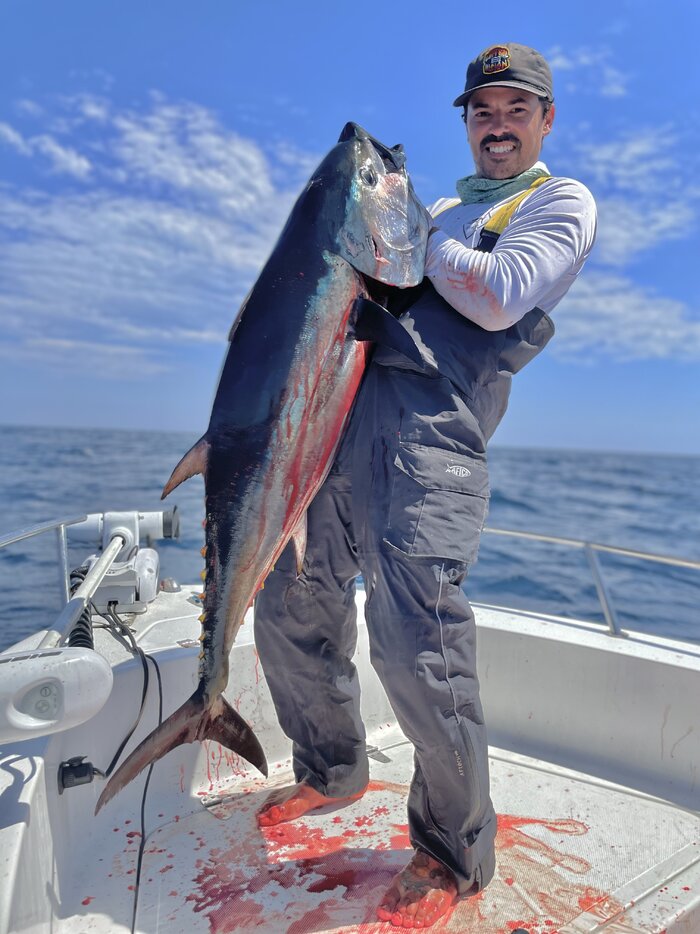 After treating the fish, eating the heart and getting it on ice, we got back to work and by this point, there were foamers in every direction. These weren't your average foamers, these were the biggest, densest groups of fish we'd ever seen. Fish grade ranged from 40-60# in one group to 80 to well over 125# in others.

Threw the mac back out again and got bit immediately only to be broken off. We tied on our last trolling lure (yozuri bonita) and were bit immediately again. 2 mins later, broke off on that one. So yea... no more 50# line. $200 in lures gone in a few hours.. unless you're buying them from Billy.. lol

We gave it a few more hours with irons, colt snipers, etc. but they didn't want anything else and were extremely boat shy. Ended up calling it around 2 to head to Avalon for ice and got to take a pic on the dock with the guys. 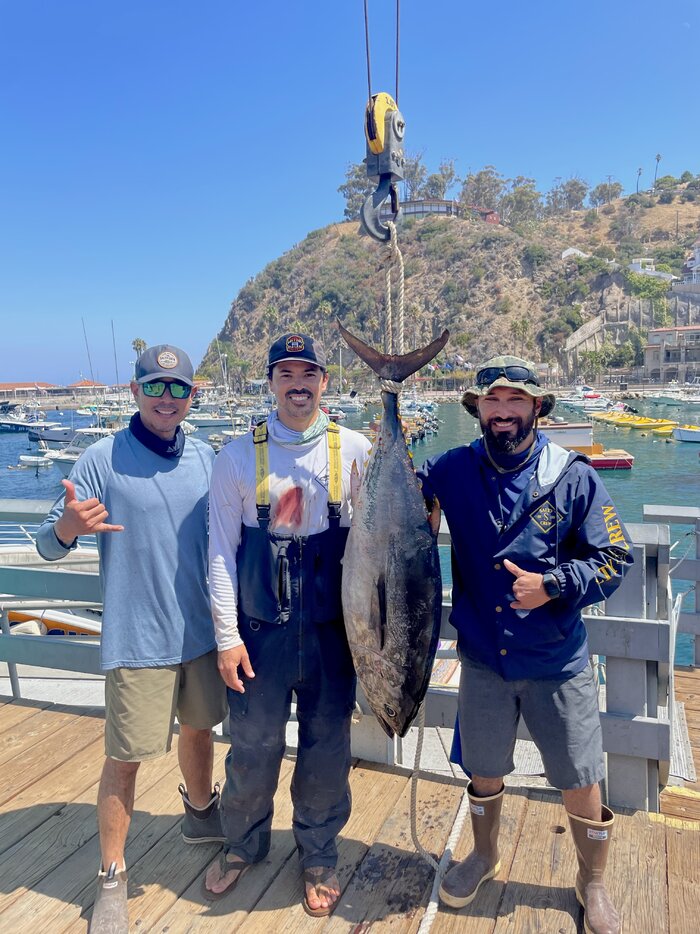 Tried to use our bait on dorado on the ride back home but every patty we found was empty. I think they're starting to move back down south (at least for now).

Hope this info helps someone. Again, trolling lure didn't matter today, you just needed to give the fish some space.

I wouldn't even be fishing less than 80 on jigsticks
Reactions: 2454 big mike, Jeff Hannah, John Stidman and 3 others
Upvote 1

FWIW, I don’t troll with anything less than 80#. It’s a reaction bite, so line size isn’t as important. Just be sure it’s strong enough to take the strike and finish the fight.
Toggle signature
Of course I know what I’m doing...
Reactions: Tunahead and M4TT
Upvote 0

Great job … that moment I read tho 50lb

Nice report and good looking fish.
What size macs are you using down there?
Upvote 0

FWIW, I don’t troll with anything less than 80#. It’s a reaction bite, so line size isn’t as important. Just be sure it’s strong enough to take the strike and finish the fight.
Click to expand...

Yeah, it's my father in law's gear. I figured I would give it a shot with what I had available. My buddy and I are now looking into a bigger setup.
Reactions: Tunahead
Upvote 0

Nice report and glad you got them. I'm in a different camp than the other guys that relied about line - I troll 50# and 60# regularly when I'm in my boat (17' Whaler) and have had not problems with tuna up to 120 (haven't been unlucky enough to get bit by anything larger). Fresh line and proper drag setting can get a lot done when fishing from a small skiff.
Reactions: M4TT and repo805
Upvote 0

Yeah, it's my father in law's gear. I figured I would give it a shot with what I had available. My buddy and I are now looking into a bigger setup.
Click to expand...

Doing alright brutha, hope all is well on your end too! By the looks of it, not too shabby. Lol

Yeah, you could chance it with lighter line like mentioned above, but why?
Toggle signature
Of course I know what I’m doing...
Reactions: Tunahead and M4TT
Upvote 0

If you need a couple more Madmacs, I have two in the classifieds
for sale.. 160mm
Used once, like new.
Brady
Upvote 0

Congratulations on your fish as you had a dream day that all private boats hope for in opportunity. Unfortunately the wrong gear cost you the chance to fulfill that dream. It’s not that you lost expensive trolling lures but you killed more than one Bluefin that’s in your photo, the others will more than likely die and sink out for a deep water sushi feast Troll 100lb minimum as some fish are over 200lbs and that’s a photo you want next time
Last edited: Sep 3, 2022
Upvote 0